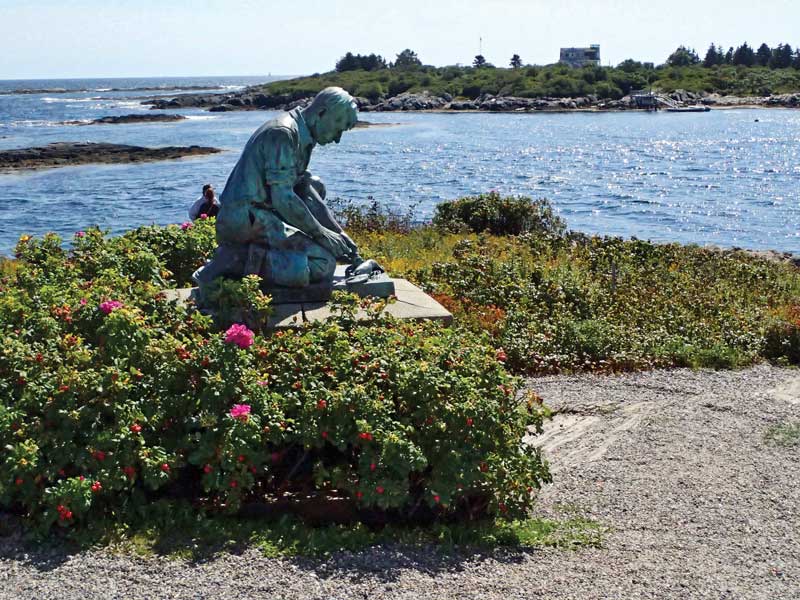 A trip down memory lane

Recently I saw an online post featuring the Maine Lobsterman Statue. I had always heard that a relative posed for the statue, and assumed it was Uncle Charlie York (famously noted for using fishing knots to tie up Art Linkletter on daytime TV). I later learned that it was Elroy Johnson and went about my business. A week or so later I saw Mimi Steadman’s Jan/Feb Small Adventures  featuring Great, Orrs, and Bailey islands with a picture of Elroy’s statue. That brought a tide of nostalgia.

Bailey Island is a Maine epicenter for Johnsons. Our ancestor, Jacob Johnson was born in England, died in 1803 at the age of 88, and was buried in the island cemetery. He had 10 children and after much begetting, Cousin Elroy, along with Grampie and Nanny (Johnson marrying a Johnson) branched out separately on the family tree. Grampie and Nanny Johnson lived in a little house at the head of Mackerel Cove. Grampie was a lobster and mackerel fisherman and when the season rolled around, he would pack up the family, including my grandmother Blanche and her siblings, and head out to summer on and fish off Damariscove Island.

As the family tells it in 1923, my Nana and Papa were betrothed because Papa couldn’t take all the rowing back and forth between Orrs and Bailey Island to court her. He was staying on Orrs Island with Uncle Charlie and Aunt Millie (yes that Uncle Charlie) to help with fishing and cutting ice. In 1928 the Cribstone Bridge between the islands was completed.

My grandparents, Nana and Papa, moved into the family house after Papa’s retirement. Visiting them in the little house at the head of the cove is the source of my Mackerel Cove memories. The house was always scented, with the fragrance of baked beans, boiled lobster or freshly baked biscuits. Uncle Bill and Cousin Carl would stop in after lobstering to gossip and get Nana giggling while they warmed themselves by the Round Oak stove in the kitchen. My day would be spent beach combing, checking out the tuna strung up on Uncle Glen’s Wharf or simply listening to the family stories. There was little better than to complete the day with a bowl of ice cream dished out by Papa, and then head upstairs to the front bedroom to fall asleep with the window open, the sound of the waves lapping the beach and the fresh ocean breeze fluttering in through the curtains.

Please thank Mimi for these adventures. It’s good to have memories and history snapped out and aired for the next generation. But in truth, it’s the smell of the ocean when it’s sweet and fresh that takes me back to Mackerel Cove, to Nana and Papa’s front bedroom with the window opened.

Since publication of my letter to editor in Nov/Dec issue of MBH&H regarding the story about aquaculture, there has been a positive breakthrough for wild fish and environment on Canada’s west coast in British Columbia. A decision by the federal fisheries minister stated “Government of Canada moves to phase out salmon farming licenses in Discovery Islands.”  This has been a 30-year battle between environmentalists and the Canadian government and the open-net pen, salmon industry. For years, salmon farming companies have denied that viruses are spread by close proximity, and that hyper-concentration in open-net pens isn’t a problem for disease. In an age of social distancing, we all understand that a high concentration of a species is a perfect environment for viral disease to run rampant. Scientists and many British Columbians feel this industry has contributed to the decline of once abundant wild  salmon and caused irreversible damage to the environment. Downeasters beware. Take it from a BC’er, closed containment—not open-net pens—is the sustainable method of choice.

Time to slow down

I was saddened to see the cover of MBH&H Issue 168—another beautiful boat helping us blast our way toward our climatic day of reckoning. With her twin 1350-hp diesels, in a single hour this boat can turn 150 gallons of petroleum into over 3,000 pounds of carbon dioxide. That is enough energy to heat a Maine home for a winter month, or enough for a Toyota Prius to drive from Maine to Southern California and back. In a single hour!

Low-speed water transport is exceedingly efficient. A pair of mules could tow a 100-ton barge down the Erie Canal for their 6-hour daily shift, each consuming a couple of bales of hay and a 5-gallon pail of grain. Between them, they produced less than one horsepower. In contrast, high speed on the water is astonishingly energy intensive, and there is no technology on the horizon that can change that. The environmental costs of petroleum stand in stark contrast to its bargain price.

As a designer and builder of powerboats, I share responsibility for helping the baby boomers switch from sail to power. My children are likely to want to hide this fact from their children. With every new customer, I explain the cost of going fast, and most of them respond by asking how they can go faster.

It’s time for designers, builders, and publishers to stop glorifying speed on the water. It will be a bitter pill to swallow—there is money to be made from that glory, money that comes from customers, who should be thinking about their grandchildren, not how quickly they can get from Bar Harbor to Camden.