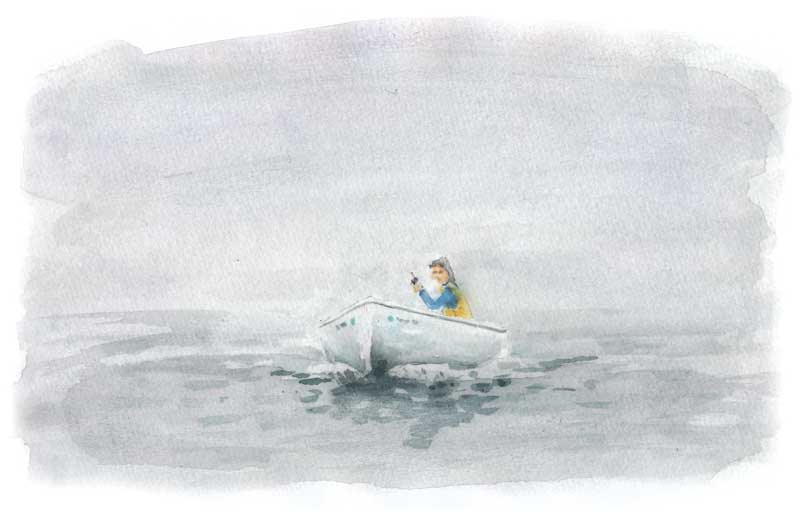 Roughly 30 years ago, I experienced one of the most riveting and intense life-and-death dramas I’ve ever enountered, afloat or ashore, and it all played out over my VHF radio. The experience brought back memories of dramas I’d listened to as a child on our household radio. But this was a real adventure, unfolding live and unrecorded.

I had departed Tenants Harbor, Maine, on a lovely late July morning during my annual two-week solo cruise. That afternoon, I tucked into the little bight between High and Dix Islands at the northern end of the Muscle Ridge Channel, and anchored Caribbean Clipper, my 25-foot Lock Crowther-designed trimaran off the north shore of Dix. After a hike around the old quarries on High Island, I returned to the boat to enjoy the evening cocktail hour and to fix a nice warm meal. Soon a thick fog began to roll in. By the time I had finished my meal and washed the dishes, the fog had gotten so thick I could barely make out the trees on Dix Island, just 100 feet away. High Island to the north was completely lost in the fog.

As I sat in the cockpit savoring a night-cap, my VHF radio crackled to life as someone began a call on channel 16, the emergency distress channel. The tremulous voice of a woman said, “Is anyone there? Can anyone hear me?” There was no response. A moment later, the woman repeated her call. Momentarily, the voice of the Coast Guard dispatcher at Rockland responded, requesting the name of the vessel and the nature of the emergency. The woman replied that she was lost in the fog in a small outboard powered skiff, and it didn’t have a name. The Coast Guard Operator inquired how many persons were aboard, instructed her to be sure everyone was wearing a life jacket, and requested her approximate location and a description of the boat. Again, the woman, clearly distressed, answered that she did not know where she was, that she had her small son in the boat, and that he was unconscious.

Could she identify any nearby landmarks, asked the Coast Guard, and from where she had departed? With increased tension, she replied, “I departed from a small island in Penobscot Bay, but I don’t know its name. My husband rented a house on the small island, but he had to leave unexpectedly for a couple of days for work and my son and I stayed behind.”

The woman related that her son had been playing in the loft of the barn that was attached to the house, and had fallen to a concrete floor below. Unable to awaken him, she had wrapped him in a blanket and carried him to the skiff, and set out for the mainland and medical help.

The woman said she had a hand-held radio on board, and was steering a northwesterly compass course, hoping to encounter another boat or to reach the mainland and find help. The Rockland Operator tried to reassure her that help would not be far off. He asked again if she could see a shoreline or any landmarks, or any boats nearby.

She replied that she could see nothing. While she continued motoring, the Coast Guard operator issued a notice to boats in Penobscot Bay and its vicinity to be on the lookout for the small skiff with the woman and child. Several boats acknowledged the call, giving their approximate locations, but reporting no sightings.

The tension continued as the Coast Guard operator maintained regular radio communication with the woman and continued to provide as much reassurance as possible. He asked if there were safety flares or a horn on board (there were none), about any change in her son’s condition, if he had any visible wounds, and for other details, as much to obtain information as to provide an on-going flow of talk. Asked about fuel for the boat’s motor, the woman replied that the tank was not full when she departed from the island and that it was still a little less than half full. There was no additional gas can on board, she added. Although unspoken, these details added to the uncertainty and danger of the situation.

Would she run out of fuel before getting help? Would her son’s condition deteriorate as night set in and the air temperature dropped? Fortunately, the weather was fair, seas were calm, and no precipitation was expected. The Coast Guard Operator repeated his notice to all vessels in the vicinity to be on alert.

Again, the operator asked the woman if she could spot any nearby shoreline, hear any breaking waves, or see anything that might help determine her location—all to no avail. It was beginning to get dark at this point.

By now, the situation had been going on for over an hour, and as I sat listening, I feared that the worst might come to pass, that the woman would run out of fuel before being found, and that she and her badly injured son would be destined to spend a night floating at the whim of Penobscot Bay’s currents.

The length of time between radio communication from the woman and the Coast Guard operator seemed to be getting longer. It felt as though I was experiencing a life slipping away with no ability whatsoever on my part to render assistance or offer comfort to the grieving mother. I’m sure I said a few prayers for the woman and for her son.

Suddenly Channel 16 on the VHF crackled to life again, and the clearly jubilant voice of a fisherman came on the air. “We got her Cap! We got her! We found her and we’re getting them on board now and will be heading for the mainland directly.” The Coast Guard operator acknowledged the report,
asking for the pertinent details of the calling vessel, its location, and its estimated time of arrival at the nearest shoreside location. The fishing boat’s captain reported that the woman and child were both safe, that the child was still unconscious but breathing and being looked after. The captain asked to have an ambulance standing by at the wharf, noting that he would be there within 20 minutes.

The fog remained thick, and I still could not see the nearby shore. But as I heard all this, I heaved a tremendous sigh of relief, and turned into my bunk exhausted and happy that this much of their ordeal was over.

When I finally came ashore some days later, I could find no newspaper reports of the incident and no one seemed aware of it. I began to wonder if I had simply dreamed the whole thing. However, once I concluded my cruise and was back ashore and back at work, I contacted the Coast Guard Station at Rockland. The Coast Guard would only acknowledge that the event had indeed occurred, and that the child had been taken to a hospital and had recovered from his injuries. No further information could be released.

To this day, I still do not know which island the family was visiting, where the skiff was eventually located, nor the name of the rescuing vessel. It remains a mystery in which I was a vicarious but most engaged participant, an experience I will never forget, and a heart-warming outcome that will forever remain in my memory.

I guess angels do exist, and sometimes they can take the form of a fishing boat captain.

Ralph Pears is a retired lobbyist now living in Montmoreci, SC. He spent most of his adult life living in Kennebunkport and Sebasco Estates, Maine, and has cruised the coast of Maine from Kittery to Eastport over a period of 50 years.