History retold with the launch of Legend 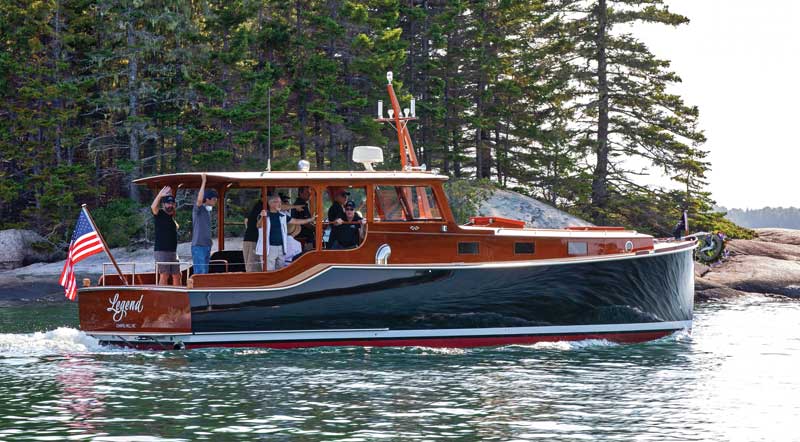 When Wes Wheeler, scion of the Wheeler Yacht Company’s founding family, commissioned Brooklin Boat Yard to build a modern version of Ernest Hemingway’s Wheeler 38, he hoped the new boat, named Legend, would be as stirring as the original. Here, Legend cruises along in Brooklin’s Center Harbor—you know how to whistle, don’t you?

It’s hard to think of three more iconic names as closely linked in the boating world as Wheeler Yachts, Ernest Hemingway, and Pilar. Hemingway, as noted a sportsman as he was an author, died in 1961. Wheeler built some 6,000 boats before closing its doors in 1965—31 years after it launched the 38-foot Playmate motorboat that Hemingway bought with funds borrowed from his publisher. He named the boat Pilar, his wife’s nickname.

Until shortly before his death, Hemingway used the boat in the waters around Bimini, Cuba, and the Florida Keys to party, conduct scientific research, pursue gamefish and, during World War II, hunt German U-boats. After Hemingway died, his widow gave the boat to the Cuban man who had been Pilar’s captain and was the supposed inspiration for the principal character in Hemingway’s novel The Old Man and The Sea. He died 18 years ago at the age of 104 and Pilar now rests in the middle of a tennis court at the Hemingway museum, outside Havana.

That rich history was the backdrop to the launching at Brooklin Boat Yard just after Labor Day of Legend. The new Wheeler 38 was built for a new Wheeler Yacht Company started by Wes Wheeler, the great-grandson of the founder of the original yacht builder. Thanks to COVID-19, the festivities were subdued and witnessed primarily by members of the extended Wheeler clan and the boatyard crew.

The new Wheeler 38 represents a collaboration among yacht designer Bruce Marek; Bill Prince of Madison, Wisconsin, who provided the design details and engineering for the boat’s cabin and accommodations; and the artisans at the Brooklin Boat Yard.

Legend is a near perfect replica of Pilar from the waterline up, but the underbody, systems, and construction represent the best of today’s design and technology. Unlike the original Wheeler 38, which had a traditional round-bottom hull and a pair of 75-horsepower gas engines that gave it a top speed of about 12 knots, the new boat has a flat-bottom hull designed by Marek that can top 30 knots with a pair of 370-horsepower Yanmar diesels under the flush cockpit deck. Zipwake automatic trim tabs on the transom and a Seakeeper gyro stabilizer mounted all the way aft beneath the cockpit should keep
Legend extremely comfortable under way at any speed. 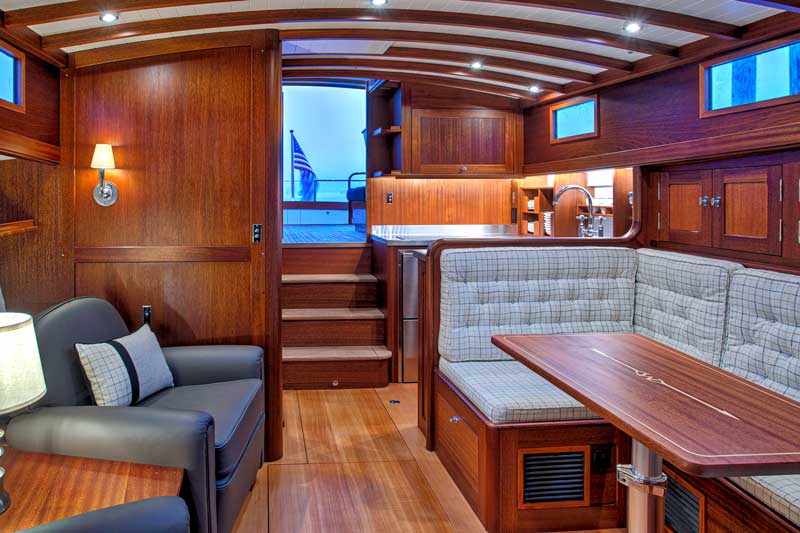 In the cabin, Legend has most of the comforts of home—plenty of light, a full galley, central heat and air conditioning and, most unusual in a boat of its size, a pair of deep, upholstered arm chairs to provide comfortable accommodations for enjoying the sort of liquid refreshment Hemingway enjoyed on Pilar.

While Legend has the look of a classic motoryacht, her accommodations and equipment are totally modern.

The helm station—located to port—is fully equipped with the latest Garmin navigation and communications gear, but it also features a large compass in a domed, polished stainless-steel binnacle mounted above the electronics displays directly in front of the helm. Below decks, there are comfortable sleeping quarters for a crew of four in two air conditioned and heated cabins.

The main cabin features two cozy armchairs along the starboard side, the kind of seating often missing on yachts this size. The chairs flank a varnished cabinet that is the perfect height to set down an off-watch drink, a snack, or perhaps one of Hemingway’s novels, and face an L-shaped settee and pedestal table that lowers to convert the settee to a double berth. Of course, there is a fully equipped galley and a high-tech sound system.

Legend is just the first of what the Wheeler Company hopes will be many new Wheeler 38s.

Stephen Rappaport is a writer and editor, has lived in Maine for more than 30 years, and is a lifelong sailor.