A Tipsy Rooster and Horse Whispering

A Letter from the Farm 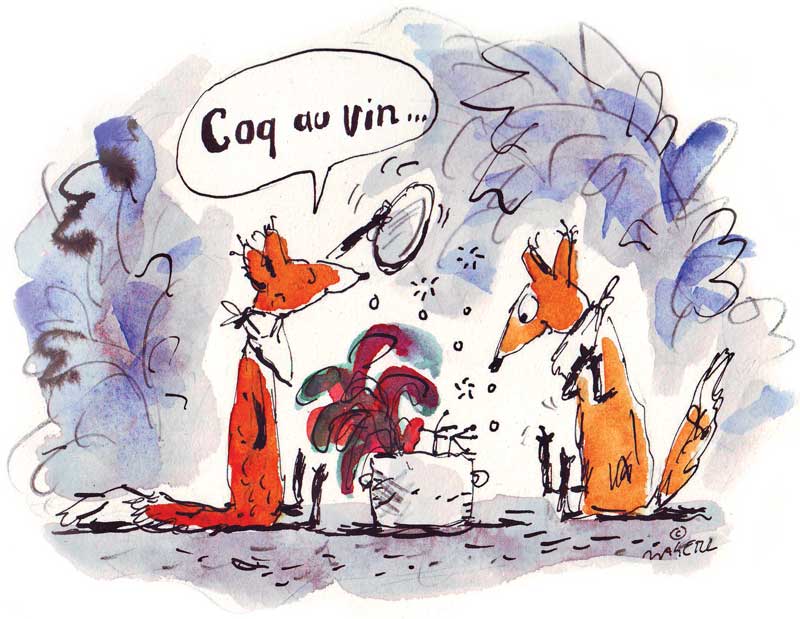 Illustration by Caroline Magerl Big Red was a loud Rhode Island Red rooster. His calls were so dependable that my grandfather, Florian Yeaton, synchronized his silver pocket watch with the first cock-a-doodle-doos at four a.m. Big Red’s daily hour-long reveille in June 1960, though, annoyed my grandmother Lue. “Had that rooster been born a soldier,” she fumed, “he’d have marched himself to death by now.”

Everyone had chores on our dairy farm. My twin Don and I, age 8, shoveled cow manure into a wheelbarrow and dumped it behind the barn. Florian tended the dairy cows, pigs, workhorses, barn, hayfields, crops, apple orchard, and woodlot. Lue ran the farmhouse, sold hand-churned butter, prepared meals, canned fruits and vegetables, stoked the coal and wood stoves, emptied chamber pots, hand-washed clothes with rainwater, and tended chickens. Dour from a hard life, she was happiest collecting eggs from clucking hens. Roosters, however, were a constant irritant.

Big Red, Lue grumbled, wasn’t much of an improvement over Rufus—an aged rooster whose habitual drunkenness led to his tragic death. On Easter Sunday 1960, Rufus, who became tipsy sampling shriveled, fermented Concord grapes clinging to the arbor, shirked his duty guarding a dozen barnyard hens. By week’s end, he was an alcoholic—an unpardonable sin to my 70-year-old grandmother, a stoic, god-fearing Yankee who believed Prohibition should never have ended.

Her chronic high blood pressure skyrocketed when Rufus’s slurred vocalizations and staggered gait greeted dairy customers. My mother offered to find a new home for Rufus. “No,” Grammy snapped, “he’s eaten nearly all the grapes. When they’re gone, maybe he’ll sober up and make something of himself.”

When reports of Rufus’s bouts of intoxication appeared in the local weekly newspaper, Bea—our Ma Bell operator and prolific gossiper—provided curiosity seekers with directions to our farm. Grandpa joked that Don and I should capitalize on the publicity by erecting a roadside sign: “See a drunk rooster for ten cents. Special family rates, twenty-five cents.” A week later, when a second journalist’s phone call interrupted supper, my grandmother erupted. “No, you can’t see the rooster, ‘cause he’s dead,” she barked into the mouthpiece. “Now you listen to me, young man, that drunk rooster done got himself killed by a fox. Serves him right.”

Seizing the moment to espouse the evils of alcohol, she unloaded, “Now let that be a lesson to your readers. Booze leads to nothin’ but trouble.” Grandpa, who hid a jug of Old Smuggler Blended Whisky in the toolshed, winked at my brother and me and said, “Finish your chowder and help me put the chickens to bed.”

Grandpa’s mild temperament—the antithesis of his wife’s—calmed both  roosters and livestock. He excelled  foremost as a horseman. Shortly after Rufus’s untimely death by fox, Bea spread news that a barn fire had made Ralph True’s Belgian workhorses dangerously unruly. They were so traumatized, Bea told Grammy, that Ralph considered putting a pistol to their heads. His brother, Albert, however, convinced him that my grandfather “would do the horses a world of good.”

From atop a mushrooming mound of manure, Don and I leaned on an empty upright wheelbarrow and watched the brothers unload two blindfolded, chestnut workhorses from a Mack truck. “Florian,” Ralph said, “I’d be mighty obliged if you could put ‘em right. They’re plumb mad.” Holding the horses’ reins, Grandpa led them into a two-acre fenced paddock. With the reins and blinders removed, the wild-eyed beasts wheeled and thundered across the green pasture.

The following morning, Tony and Colonel, our draft horses, stuck their heads over the paddock’s fence, eagerly awaiting their daily treat. As hoped, the new arrivals also trotted over to Grandpa who gave each horse an apple, carrot, and a handful of oats. With that first positive step accomplished, Grandpa retreated to the milking parlor.

As he sat on a three-legged stool milking Ginger—a sweet, tawny Jersey cow—the four horses watched through open barn windows. We had no way of knowing if the sight and hiss-hiss sound of steaming milk squirting from an udder into a milk pail calmed Mr. True’s horses, but it sure eased our frayed nerves. And when Don filled two porcelain bowls with warm milk, giving one to the barn cats and one to our border collie, Bonnie, a row of horse heads stretched into the milking parlor. Ginger, our best of 15 milkers, chewed her cud rhythmically side to side as she turned and stared indifferently at the equine gawkers. Her large brown eyes, accentuated by long, beautiful lashes, caused mother to once quip, “Ginger’s eyelashes would make Elizabeth Taylor green with envy.”

Mother’s cousin Jennie often regaled me with stories of Florian’s lifelong love of horses. He didn’t attend school as a child, she explained, because his labor was needed on the farm. “Florian forged friendships with horses because he had no schoolboy friends. In the winter of 1906, when your grandfather was 12,” she recalled, “his father’s horses fell through the ice hauling Sandy River water to the barn.” They nearly died of hypothermia before being freed. For three nights, Florian slept on a bed of straw in the horse stable, tending the horses every few hours by replacing their wool blankets with ones he’d warmed in the kitchen’s wood cookstove oven. “After that ordeal,” Jenny marveled, “those horses followed him everywhere, including back onto the ice-covered river to collect and haul livestock drinking water.” With the cast-iron hand pump frozen solid, the river was Florian’s parents’ sole source of water.

In 1960, when Mr. True sought Florian’s help, he was unaware that my grandfather had accumulated a lifetime knowledge of horses. Studying the traumatized horses’ facial expressions, ear and tail flicks, whinnying, and head shakes, Grandpa was convinced the animals were not beyond help. 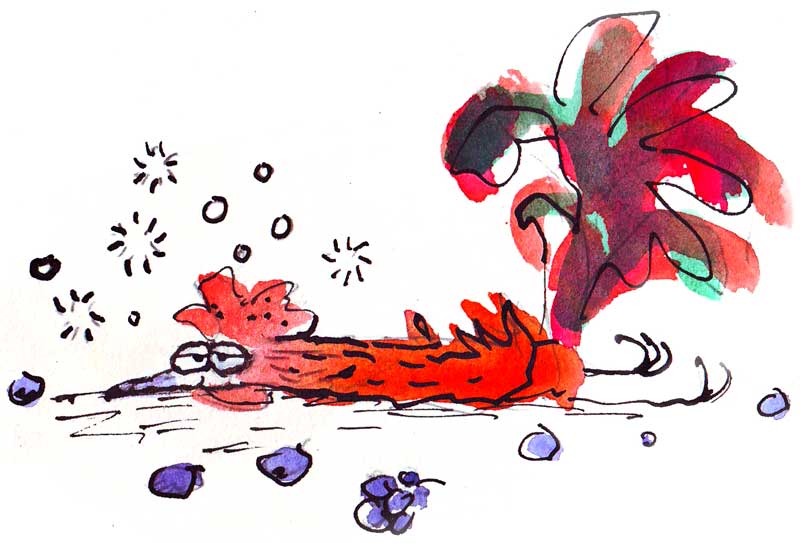 Illustration by Caroline Magerl
Rehabilitating True’s animals began in earnest by teaming one and then the other with Tony, our laid-back draft horse. The duos twitched pine logs from woodlots, plowed potato fields, and delivered hay-filled wagons to the barn. On day 13, True’s horses—teamed up for the first time since the barn fire—were hitched to a noisy J.S. Kemp manure spreader. Grandpa clicked his tongue at the horses and the wagon lurched forward. My brother and I, seated next to him on the driving bench, held our breath. Clear of the road, we awaited Grandpa’s signal. He nodded and we pulled the iron lever backwards, engaging a center chain that dragged manure to the wagon’s rear where it was shredded by a churning wheel of spiked beaters and hurled over fields of timothy and clover. Tension turned to laughter when chunks of manure bounced off Bonnie. The horses performed flawlessly. That evening Grammy phoned Mr. True with news that his Belgians had passed their final test and would be ready to be picked up in the morning.

Shortly after sunrise, Ralph True stood in our barnyard and silently studied his well-adjusted horses; he then looked at Florian with reverence. Both men didn’t waste words, and none were exchanged. Grandpa had saved his few words for the horses. Lovingly moving his large, calloused hands gently across their necks and sides, he spoke so softly only the horses heard his words. With the animals loaded in the Mack, Mr. True shook hands with my grandfather and brother. He turned to shake mine too but my hands were firmly wrapped around Big Red, fearful that he’d spoil the reunion.

Ginger, who had been mooing since Mr. True’s arrival, was now bellowing. Grandpa looked at his pocket watch and said, “She’s complaining. I’m late milking her.” With his arms around Don and me, we approached the sliding barn doors. “Hold onto your horses, ol’ gal,” he said. “We’re coming.”