Treasures in the sand

Conventional readers probably open a magazine from the front and leaf through starting on page one. I am one of those who just open it up and go backward; this is how I found Christine O’Connor’s essay “The History That Lies Beneath” (MBH&H Sept/Oct 2020). Her account of the boat in the sand brought me back in time to a most memorable day when Cindy and I went with our 3-year-old son Scott to comb the shore at Beach Haven, New Jersey in July of 1964.

We were restoring our first home in Forked River, N.J. (it’s pronounced Fork-ed, not Forked) and there had been a three-day North Easter storm that had howled and pelted us with rain. The high tides covered the marsh across from our road and floated boats from slips up and over walkways. Lots of bailing required. Once these storms abated, they usually were followed by clear skies and no wind—perfect conditions for beachcombing. Christine’s article brought back flashes of clarity of that July day—the cool, wet sand between our toes as we walked the tide line; the smell and taste of the churned up salt air; and a surf that plopped rather than pounded.

Like Christine, we found a recently uncovered treasure, not just one but at least four. There, way up at the last high tide mark in all their glory, hidden and assumed long gone and forgotten, were the remains of the Beach Haven Pound Boat Fleet. I have included photos of the rescue of one of them (at left and below). 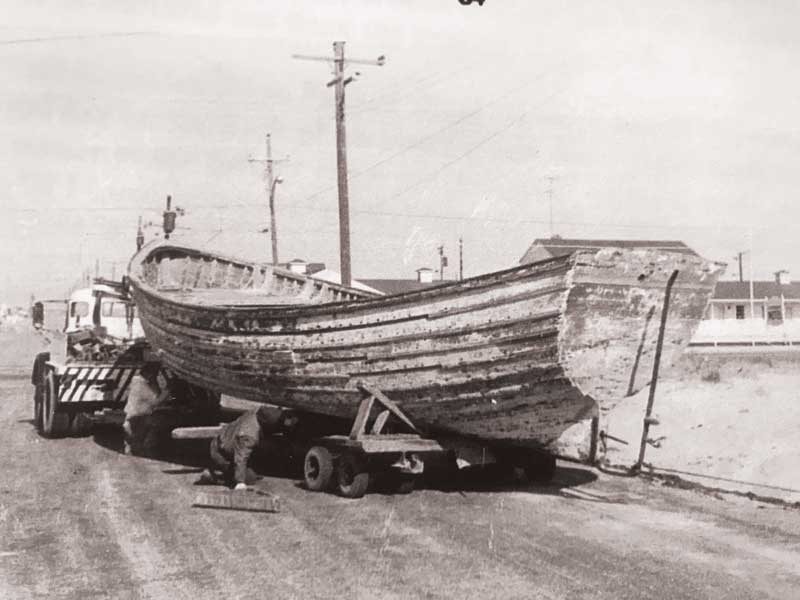 (Above) The pound boat loaded onto a truck. (Below) Midway through excavation. Photos courtesy Bill Rocknak 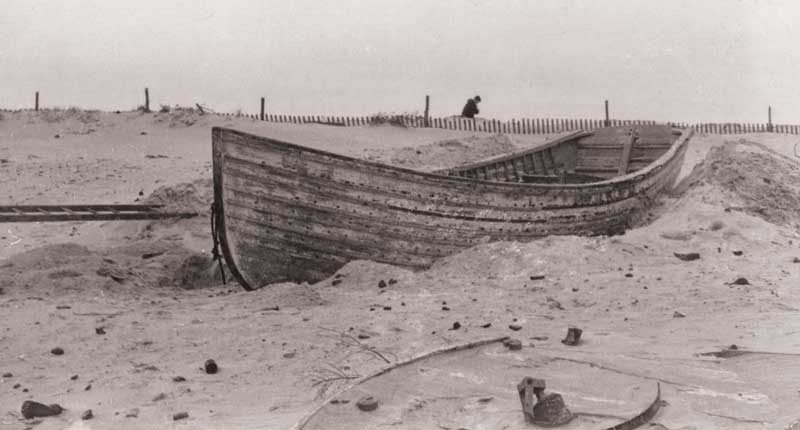 The boats had disappeared during a storm sometime in the 1940s. When we found them they were covered in sand, and in some cases only the bow stem or curve of the transom was visible. The owner of the fishery gave me permission to keep one if I could dig it up and remove it from the beach. The boat went to our boatyard where we displayed it. We sold the yard in 1987 and the boat was destroyed. It is doubtful that there is a pound boat left in New Jersey.

When I was young, during WW II, our family rented a small beach house just a block away from the barrier dunes at Sea Side Park, NJ. There was an active, small fleet of Pound Boats and fisheries in operation at this time. Pound fishing was done by installing long poles and nets in the ocean in a grid anywhere from 1-3 miles offshore. Fishermen would row out daily to collect their catch. Depending on the tide and weather, you could watch when the boats were launched and later in the day when they surfed back dramatically to the beach. When the boats beached, it was imperative to haul them out of the surf to avoid a nasty broach.

A team of horses would be at the ready, with a crew that placed large round wood rollers under the bow as the horses took up the tension and hauled the boats up to the high tide marker. It was amazing that the boats didn’t sink since they were loaded within inches of the sheer with flopping fish—bluefish, sand sharks, fluke, flounder, stripers, crabs, weakfish, and others. Two different crowds would be waiting for the haul: local people looking for a few pounds of fish for dinner, and the other a great buzzing swarm of greenhead flies.

I minored in and caught the above subject early on. I studied long and hard. It has now resulted in “More Boats Than Brains” and “messing about in boats” while dreaming of more. I just bought one of your Plures naves quam mentes hats for my 77th birthday. In my youth I sailed on the last voyage of the brigantine Yankee. Later we lived on a 47+ ft wooden wheelhouse ketch built by two shipwrights in Boothbay in 1958. Originally named Polar Bear, she was an S&S design built for a retired rear admiral.

By the time we got her she was Sine Cura, and lived up to her name having gone “without care” for some time. We lived aboard with kids and dogs while I reconditioned her as sweet Constance of Gloucester Point, Virginia. We took her on two six-month cruises into the SE Bahamas to do counseling and help build a new church in “the Devil’s Saddle” on Long Island. Later I gave her to a friend, a Vietnam Vet who was in maritime mission work. When he died of throat cancer she went to another vet.

Then in 2010 I sailed our 41 foot Cheoy Lee ketch Malagueña to Israel from Virginia to be used with men suffering from PTSD. I still have “Plures Naves Quam Mentes,” in the form of 27- and 34-footers named Beau and Bella.

Maine Coast Heritage Trust’s feature on the late Peggy Rockefeller, its primary founder, in your Nov/Dec issue was a delight to see. A highlight of my life was to work for and with Peggy when I was on the MCHT staff in its early years and then on its board. Brilliant, hardworking, hugely energetic, dedicated to preserving the Maine coast, demanding of everyone’s best efforts yet deeply caring about other people and with a mischievous sense of humor, she was a leader to die for. She also was an avid sailor with a special place in her heart for her R-boat Jack Tar. Peggy’s vision laid the groundwork for all that Maine Coast Heritage Trust has accomplished in its first 50 years—its preserving magnificent scenery, essential habitat for fauna and flora, public access for outdoor recreation, and much more, including now addressing challenges of climate change. She inspired many, many people to engage in protecting the nature of Maine, very much including me.

Pat on the back

Congratulations on your multiple Folio magazine awards. Well-deserved! You deliver consistently excellent and interesting content, beautifully produced. I am not surprised.