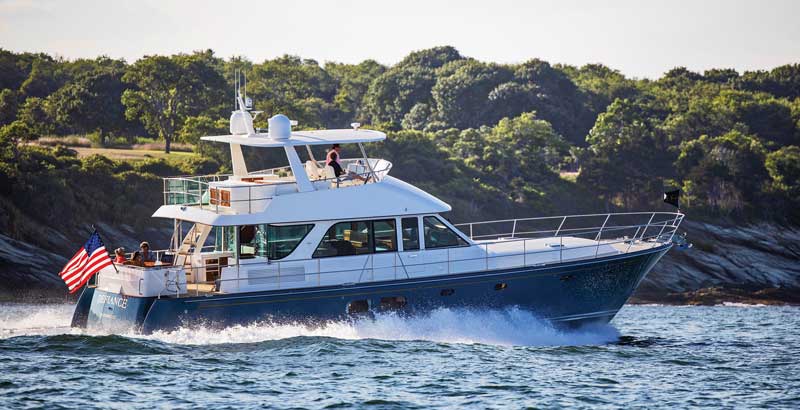 The Hunt Ocean 63 is like a floating home, with three levels of living space including bedrooms, a living room with a view, and an open-air deck. Photo by Onne Van Der Wal

Probably all powerboat cognoscenti know this, but the Hinckley Company and Hunt Yachts are now married and living under the same roof. Better than any words could tell, the newly launched Hunt Ocean 63 is a testimonial to this marriage made in boatbuilder heaven.

Hinckley’s several poweryacht models, mostly built at a factory in Trenton, Maine, are reminiscent of a New England style whose epicenter was Southwest Harbor. Hunt Yachts evolved from the late C. Raymond “Ray” Hunt. Famous for the Concordia Yawls, redounding in curves, Hunt—who I always suspected might have been a soap-box racer as a kid—was an unabashed chine-fancier.

The box-inspired 110 and 220 sailboats he designed were all chine, and his Boston Whaler incorporated short and long chines. Hunt pioneered the deep-V revolution. His seakindly hull forms and even his cabins had an instantly recognizable crisp, boyish look that has never required changing.

Designed by Hunt’s firm, the C. Raymond Hunt Design studio of New Bedford, Massachusetts, the new Hunt 63 is built almost on the opposite side of the world from New England, in a state-of-the-art factory in Taiwan, and commissioned in Portsmouth, Rhode Island, now the headquarters for Hinckley and Hunt. During a conversation with Phil Bennett, Hinckley sales guy and friend, at the familiar Southwest Harbor Hinckley phone number, I mentioned that I could see Moppie in the lines of the dramatically larger new yacht. (Moppie was a groundbreaking 24-foot Ray Hunt/Bertram offshore racing powerboat.)

“What I love about the Ocean 63 is exactly that,” said Bennett, referring to the Moppie look. “It’s far larger, big enough to do the job of a huge living space, with sumptuous style…It’s got Feng Shui.” He expanded the point: “Every boaty part of her is authentic, but at the same time it’s functional; it’s also a shining work of art.”

The design of the Hunt Ocean 63 is beautiful. Somehow the proportions are interesting and complex enough to trick you into forgetting that the boat has a rather high and expansive profile encompassing three decks.

And while the boat is big, it’s also fast. A 20-degree transom deadrise provides a stable ride in the roughest conditions. Powered by twin Volvo Penta IPS 1350s, the Ocean 63 cruises at a nimble 26 knots and reaches 31 knots wide open. On longer passages, you can throttle back and cruise at 10 knots, extending your range to 1,150 nautical miles.

Inside, there are comfort and entertainment assets spread everywhere, some of them unusual—like the U-dinette aft on the flybridge. The Ocean 63 is also available as an express cruiser. Curved windows and sliding doors and solid stainless-steel rails are spread around liberally.

This boat has a foot or more of unexpected extra space in every room, to the point where the idea of living aboard seems like yet another, thinkable, new normal. The main salon includes generous living space for dining, and socializing. Unobtrusive cabinetry and other nooks below decks provide ample storage space. The first Ocean 63 includes four ensuite cabins, but buyers might also choose to convert one of those cabins into an office and a private area instead. Crew quarters are also available.

The engine room has excellent headroom and easy access to different mechanical systems; the electrical system is controlled from a well-marked, central switchboard; and at the helm station, you’ll find fingertip controls with IPS joystick docking, Humphree interceptors and stabilization for a comfortable ride, a full suite of Garmin navigation instruments, and more.

The interior of the first Ocean 63 features extensive brightwork and teak-and-holly decks chosen by its owners, who worked with designer Martha Coolidge of Rockland, Maine.