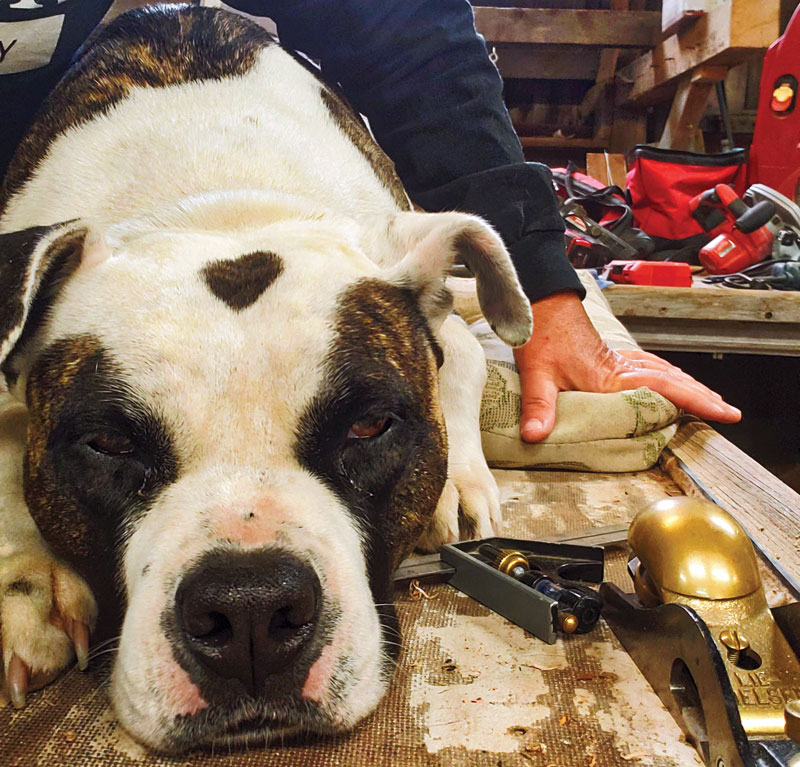 Rescued from the streets of Gastonia, North Carolina, Zena is an almost-5-year-old bulldog mix, who has been helping her humans, Susan and Kirk Folk, with a very important boat project. Kirk has been restoring Premlata, a sloop-rigged Quoddy Pilot, that was designed by Bob Lane and built by Susan’s cousin Gary Price in the 1970s at Penobscot Boat Works. Susan, who described the boat as a “family heirloom,” sailed on her as a kid in Florida. Price, who built Premlata in his spare time after work, started working on her in 1972, the year Susan was born, and launched her in 1975, the year Susan’s brother was born. The Folks acquired the boat from him in 2007 and stored her in a large bow shed. Recently they moved her into the couple’s barn, where Kirk, with the help of Zena, has been restoring Premlata. He retired in 2007 from the U.S. Air Force after 12 years of active duty including stints in Iraq and Afghanistan, and then took boatbuilding classes at the Apprenticeshop in Rockland. At this time the Apprenticeshop does not offer boatbuilding classes for dogs, but nevertheless Zena knows what to do: sleep, eat, and supervise.

At Home in Port