If This Land Could Talk 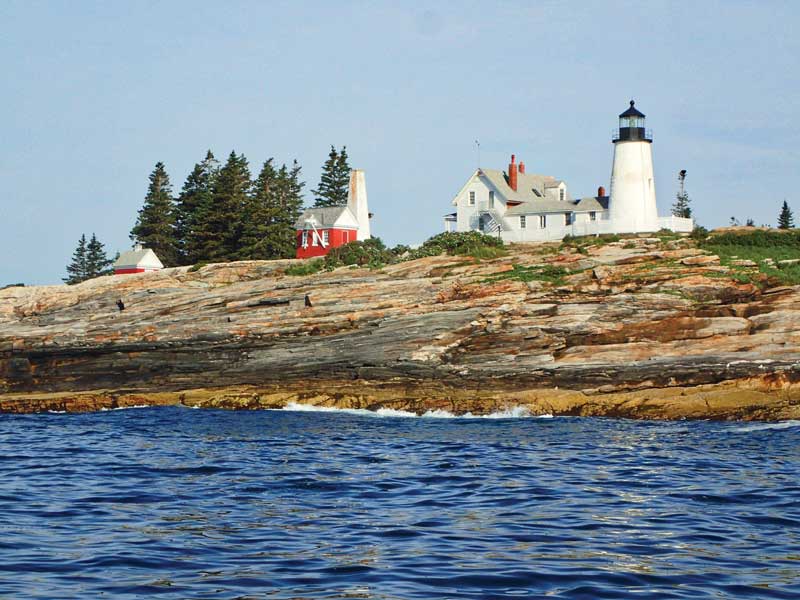 On a sunny afternoon last July, the seas at Pemaquid Point were calm as a proverbial millpond. Over the years, I’ve experienced a full spectrum of conditions surrounding this stony promontory at the tip of a peninsula just east of Damariscotta—including heading into bow-bashing swells while waves shattered on the rocks—and I was grateful for the day’s unusual gentleness.

Scanning the rugged, striated outcroppings as we motored past the lighthouse, I tried to picture a tender delivering kerosene for the beacon in the late 1800s, hovering as close as possible to the unforgiving shore to unload a heavy fuel line. I hoped the captains were able to choose days like this. No doubt, though, they answered the call no matter the weather, risking their safety for the safety of other vessels plying these waters.

I’d recently learned about this tricky maneuver from lighthouse docent Bill Anthony. He also explained that sperm whale oil was used when the tower was first built in 1827—and rebuilt in 1835 after mortar that had been mixed with saltwater compromised its integrity. Today, one 1,000-watt electric bulb does the trick instead. Thanks to a fourth-order Fresnel lens, installed in 1856, the light is concentrated into a mighty beam that’s visible 14 miles offshore. Augustin Fresnel introduced the technology back in 1822, and his theories form the foundation of modern optics. “The prisms inside today’s automobile headlights work in a similar manner,” Anthony noted.

Said to be one of Maine’s most-photographed lighthouses, Pemaquid’s celebrity grew even more following its appearance in 2003 on the Maine State quarter, along with the grand three-masted windjammer Victory Chimes. 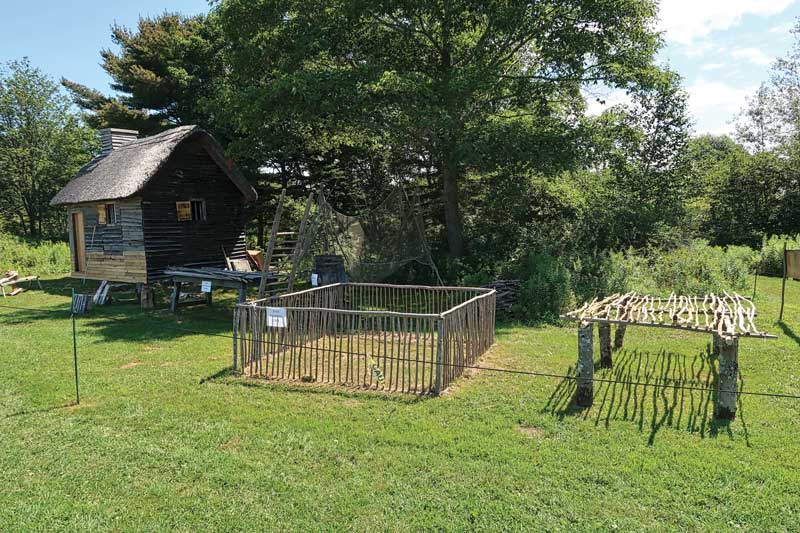 On another summer day, I drove down the peninsula to a lesser-known landmark, but one I find especially compelling. Four miles from the lighthouse, Colonial Pemaquid, a State Historic Site, sits quietly beside Pemaquid Harbor. Tucked into its gently sloping meadow are clues to a year-round
English settlement begun in the 1620s, at the same time the Pilgrims were putting down roots beside Plymouth Rock. (Earlier English fishing outposts in this area had been seasonal.) As I wandered among a dozen or so excavated stone cellar holes, I studied signage describing the dwellings, blacksmith’s shop,
customhouse, warehouse, and other buildings that once stood here. A replica of a fisherman’s tiny cottage provided a tangible sense of daily life.

Historians believe that by 1665, there were some 30 structures here—built on land usurped from Native Americans. A tenuous peace lasted for a few decades, but Abenakis retaliated in 1676 during King Philip’s War, burning the village and sending survivors fleeing to Damariscove Island. Colonists returned to rebuild, but after further attacks by the Abenakis and French troops claiming the region for France, they deserted the settlement. Nearby stands a 1908 reproduction of a large stone tower, part of Fort William Henry, built in 1692 to guard the little community but destroyed during a siege only four years later. 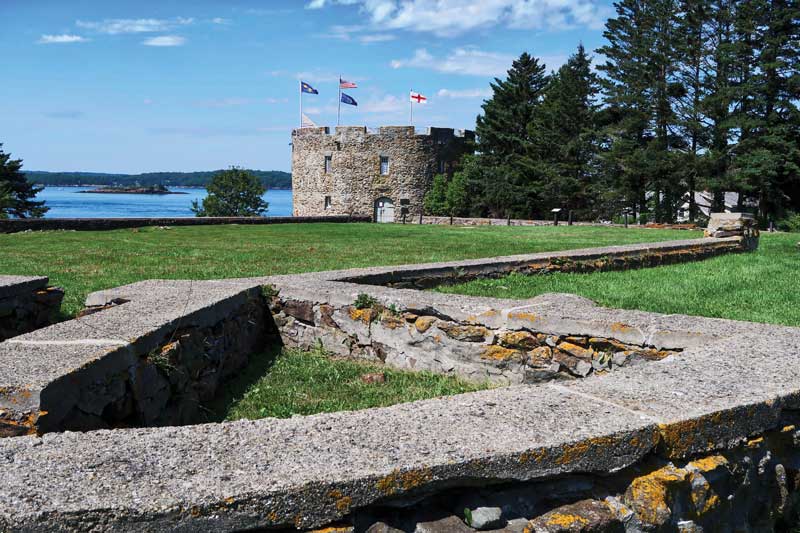 The tower near the entrance to Pemaquid Harbor recreates part of Fort William Henry, built in 1692. Photo by Mimi B. Steadman

In 1729, British Colonel David Dunbar resurrected the village, recruiting several hundred residents and raising about 40 structures along a grid of dirt lanes. However, after officials annulled his claim to the land, he was forced out and the settlement was again abandoned.

Walking back to my car, I wondered about other foundations hidden below the grass, awaiting discovery. If only the veil of time would lift for a minute, allowing a peek into the past.

En route to the main road, I detoured to Pemaquid Beach to check out a handsome new pavilion built earlier this year. As I watched families toting beach toys and lounge chairs out to the white sand, my head swirled with the many-layered history that has unfolded right here.

If You Go to Pemaquid

There is a public launching ramp next to the Contented Sole restaurant. Pemaquid Harbor Yachts (207-677-3726) has three rental moorings ($25-$35) for visiting yachts up to 40 feet. The company can also provide tide-dependent hauling, as well as repairs and storage (plus new construction). Pemaquid Marine (207-677-2024)—builder of the much-revered Banks Cove 22 powerboat—offers five rental moorings ($30) accommodating yachts up to 50 feet, plus hauling, service, and repairs.

Comprising the lighthouse, the Fishermen’s Museum in the former keeper’s house, and the Pemaquid Art Gallery, Pemaquid Point Lighthouse Park is open mid-May to late October (small admission fee). Colonial Pemaquid, a National Historic Landmark as well as a Maine Historic Site, encompasses the location of the original settlement, a small graveyard dating from at least the early 1700s, Fort William Henry, and a late-18th-century Federal-style mansion known as Fort House. A calendar of informative presentations and interpretive demonstrations is offered in warmer months, and a living-history encampment is staged here annually. A small museum (open Memorial Day weekend through September 1) houses displays on the area’s history from ancient Native American life through the Colonial period, artifacts unearthed during archaeological digs, and a miniature diorama of the Colonial village (small day-use fee; over 65 free). Pemaquid Beach (small admission fee; under 11 free) offers a groomed, protected beach, restrooms, changing and shower facilities, and a snack bar.

For upscale dining, choose the charming Bradley Inn, just down the road from the lighthouse. On the road to Colonial Pemaquid, the cozy Cupboard Café dishes up hearty breakfasts—don’t miss the famous cinnamon and sticky buns—and lunches featuring sandwiches and burgers. In a converted dockside cannery within the grounds of Colonial Pemaquid, The Contented Sole draws locals and visitors for fresh seafood, sandwiches, and pizza. Tie-up at the dock is first come, first served. Overlooking the opposite side of the harbor, Pemaquid Seafood offers lobster rolls and dinners, steamers, fried seafood, and burgers. Sadly, the Sea Gull Shop restaurant, which stood beside the lighthouse for 83 years, burned down in September. There are plans to rebuild.

Pemaquid Harbor, Johns Bay, and island-peppered Muscongus Bay present a choice of paddling waters for all experience levels. Maine Kayak, located right on the harbor at Colonial Pemaquid, rents single and tandem kayaks by the day, hour, or longer. The outfit also leads guided eco tours, overnight camping excursions, and longer trips. Few visitors to the lighthouse can resist spending a little time scrambling over the rocks on which it stands (respect the waves; people have been washed into the sea here). The Coastal Rivers Conservation Trust website (coastalrivers.org) lists a variety of nearby hiking trails.