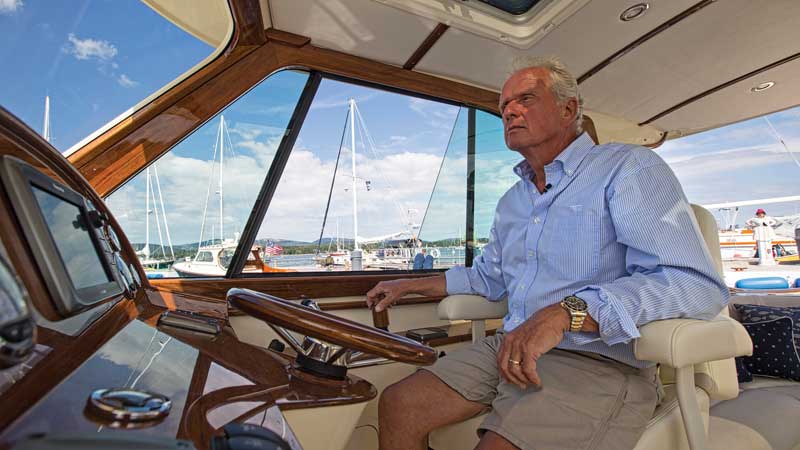 With decades in the industry, Hinckley Yachts’ Phil Bennett says the best part of his job is helping people find the right boat and getting them out on the water.Photo by Billy Black

Phil Bennett is one of the great lyricists of the boating world. He can talk about anything, from good books, to good food, to boats. He’s very good at boats.

The long-time vice president of sales and marketing for Hinckley Yachts, Bennett, occasionally accompanied by his wife, Dorothy, is a fixture in the Hinckley booth at boat shows. He always has a smile on his face and positive comments to make, even now in the midst of a pandemic that has resulted in the cancellation of most major boat shows worldwide.

He takes a long view, informed by decades in the industry and on the water, that is inspiring to anyone who worries about how economic vagaries impact the discretionary spending that goes into recreational boatbuilding. “One thing that’s remarkable about this moment is how it’s caused so many people to look at their life priorities and rearrange them,” said Bennett. “People are saying, ‘I should be spending more time with my kids and with my family and not chasing a dollar. That’s been good for boating.”

Today, Hinckley runs yards up and down the east coast, but the company’s roots are in Southwest Harbor, where the company was founded in 1928 and where Bennett is based—he and Dorothy live off-island, on the waterfront east of Ellsworth. The company’s primary manufacturing plant is located nearby in Trenton, Maine.

Bennett’s nearly 50-year career, spent largely with two of the world’s premier production companies, has given him the chance to tune up sails for America’s Cup contenders, travel worldwide, get to know top designers like Augie Nielsen and Rod and Olin Stephens of Sparkman & Stephens, race against the King of Spain in the America’s Cup Jubilee, and hobnob with famous customers, from Buckminster Fuller to Martha Stewart, Bob Iger, Walter Cronkite, and Jimmy Buffet.

One day, President George H.W. Bush was admiring Hinckley yachts off the waters of the Kennebunkport, Maine, family compound.

“I mentioned to him, ‘I know how you can get one,’” Bennett recalled. “At the end of his presidency, he wrote back and said, ‘I think I’ve got to watch my budget.’ It was the nicest note—handwritten in pencil.”

Meeting interesting people, Bennett said, is what he loves most about his job. He describes his role at Hinckley as less salesman and more matchmaker. “I’ve certainly sold thousands of boats in my day, but what I really do is help people buy the right boat for them and their family so they can enjoy their time on the water.” 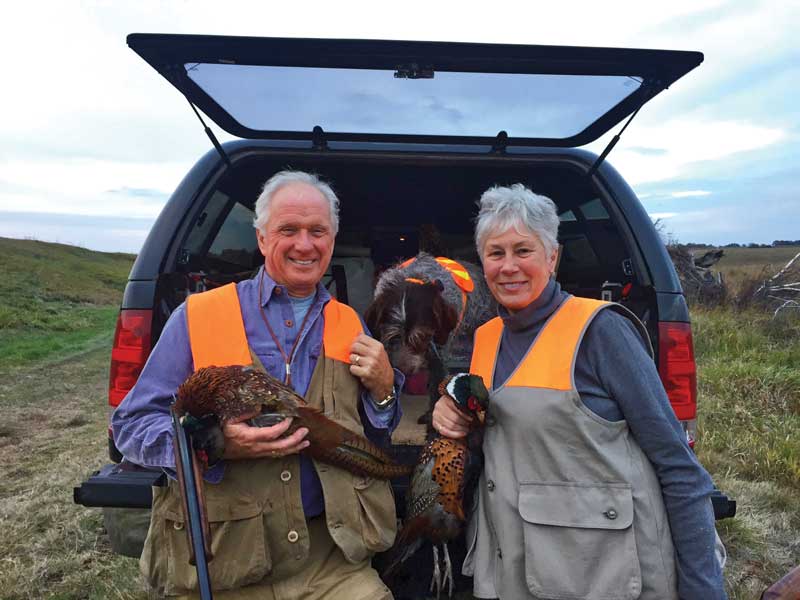 In his off-time, though, Bennett’s main hobby involves dogs, not people. For almost 30 years he has been training and hunting with wire-haired pointing griffons. He and Dorothy, who also hunts with him, acquired their third griffon puppy last spring. He first learned about the breed from Bob Hinckley, who took him on a partridge hunting trip in Halifax with one of the dogs. “They have a nose like a blood-hound and the field tenacity of a terrier,” said Bennett. “They can track birds and deer, but I don’t hunt things with eyelashes.”

Bennett grew up sailing and messing around in boats near his family home in Mystic, Connecticut. His grandfather worked for Cape Cod Shipbuilding Company in Wareham, Massachusetts. Like the Hinckley Company, Cape Cod Shipbuilding in the 1950s was an early leader in the use of fiberglass for boatbuilding.

“I was steeped in boats as a kid,” Bennett said, describing early days sailing in Cape Cod classics like the Bulls Eyes. At about 6 years old, he went to his first boat show with his grandfather, who was working the Cape Cod Shipbuilding display. It was the first show of many for the now veteran salesman. 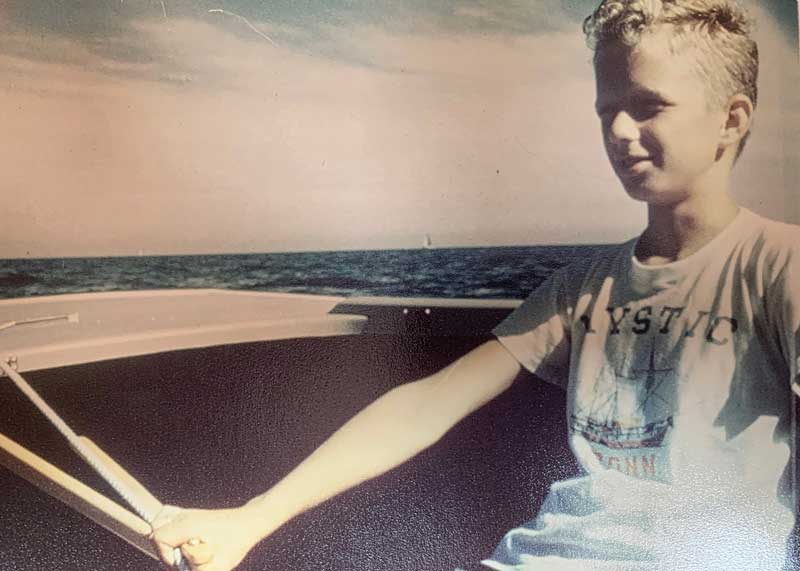 Growing up in Mystic, Connecticut, Bennett was steeped in boats, sailing in classics like the Bulls Eyes built at Cape Cod Shipbuilding where his grandfather worked. Photo courtesy Phil Bennett

Bennett, who enjoyed helping people, considered going into the ministry or teaching at the college level. An exemplary college student, he graduated with honors from Drew University, in Madison, New Jersey, where he developed an interest in the biological sciences. A teaching fellowship with the University of Connecticut followed. That lasted less than a semester.

“Teachers in the biological sciences were being forced to go back into the lab to do research, because those were the publish-or-perish days,” he said. “I wanted to be in the classroom, teaching.”

It was time to regroup. Pfizer, the pharmaceutical company, offered him a lab position, but he didn’t want to live in the Midwest. He was heading to another interview in New Hampshire when his life took a sudden turn.

“I got lost,” he said. “I got through Boston and saw a sign for Marblehead. I knew Marblehead was the sailing capital of the world. I had enough time and I thought, ‘I’ll go visit.’”

He also knew Marblehead was home to Hood Sails.

“They were the Rolls-Royce of sails,” he said. “I walked up and asked to take a tour of the loft.”

It was 1971. Hood offered him a job at the lowest rung, washing sails.

“I ended up rethinking my priorities and realizing that where I lived and what I did in life would be more important to me than how much money I made,” Bennett recalled.

Rising through the ranks over the next 13 years, he ran numerous lofts, sold sails and sail-handling systems, and became worldwide vice president of sales and marketing. In 1974, he participated in sail making for domestic and international challengers for the America’s Cup, including Courageous, his boss Ted Hood’s 12-meter yacht.

In 1984, Bennett went to work as general manager for Sailboats Northeast Group, a Marblehead boat retailer. While there, he sat on numerous manufacturer and marine industry advisory boards. Five years later, he received an offer from the Hinckley Company to head up its sales department.

“I said, ‘Maybe it’s time for my wife Dorothy and me to move out of Marblehead,’” Bennett said. He added, of Marblehead’s evolution as a tony bedroom community, “I knew it was time when I realized I was the only person still mowing my own lawn and washing my own car.”

Bennett became part of Hinckley’s growth as the company’s focus shifted from sailboats to the development and phenomenal success of its Picnic Boat. Introduced in 1994, it was the right product at the right time, he said. Boating had become less about the journey and more about the destination. The Picnic Boat, which has since undergone numerous iterations, provided speed and handling combined with Hinckley style. Today, about 1,200 have sold.

“I embraced the idea very strongly on behalf of the Hinckley Company because I felt it was a real game-changer,” Bennett said.

“I’ve been lucky: I’ve put a lot of smiles on people’s faces over the years by allowing them to get out and enjoy time on the water with their families and friends,” he said. “I’m touching a part of their lives that gives them great joy. I can’t believe I get paid for what I do.”