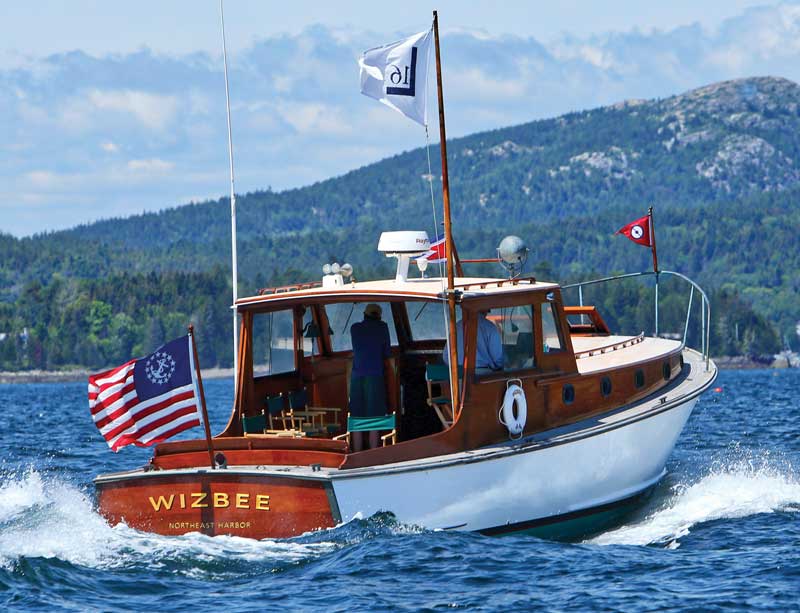 Wizbee, a downeast classic built in 1958 by Bunker and Ellis, was recently restored at Jim Elk’s Spar and Boat Shop on Mt. Desert Island. She is shown here heading into Northeast Harbor. Photo by Art Paine

We’ve called this column “Off the Drawing Board” for more than 30 years, but Wizbee wasn’t conceived on a drawing board. Designed and built by Raymond Bunker and Ralph Ellis in 1958-59 in Manset, Maine, her style and flair pre-dated computers and 3D software. Most likely Wizbee took shape off of a half-model carved from pine.

Bunker and Ellis are known for producing the first of what we now call “lobsteryachts.” The 32-year collaboration between these two skilled craftsmen, who had a killer work ethic, is legendary. Sometimes the best boat designs come from the hands of people just trying to make a living: the 59 wooden powerboats designed and built by Bunker and Ellis being a case in point.

A couple of years after I joined the crew at Jim Elk’s Spar and Boat Shop on Mount Desert Island, Elk and his right-hand-man Steve Keblinsky flew to New Jersey to survey a vintage Bunker and Ellis powerboat named Cat’s Whiskers. Upon their recommendation, and with a mostly positive review of the boat’s engines and mechanical gear, the client purchased the boat, accepting Elk’s assessment that this diamond in the rough could be restored to a jewel, with work proceeding over two or three winters.

Only after he had bought her and renamed her Wizbee, did the client meet Ray Bunker’s granddaughter, Kathe Walton, the unofficial Bunker and Ellis historian. First named Clio II the boat was custom built for the Schieffelin family, of Philadelphia and Seal Harbor. This family had amassed a considerable fortune importing fine wines, spirits, and champagne from Europe. Clio II was a gold-plater by anyone’s standards. Though most Bunker and Ellis yachts used African mahogany for the cabin sides and coamings, the Schieffelins specified Honduran mahogany, which is universally considered superior. With twin side-by-side Chrysler 450 gas engines, the boat may have been the fastest lobsteryacht in the waters around Mt. Desert Island.

Ralph Ellis and Ray Bunker met during a game of pool in 1946. During their 32 year partnership they built 59 boats, including Wizbee, which went through several owners over the years before the current owner had Jim Elk and his crew restore both her hull and interior. Photo by Art Paine.

The second owners, the Dougherty family, renamed her Cat’s Whiskers and kept her at the end of a long dock in Bay Head, New Jersey. In addition to frequent use as a picnic boat, she was popular as spillover lodging. Fresh water for the shower in the boat’s head made for happy lodgers, although when Elk rebuilt her he had to contend with some rot as the result of that luxury. The entire ship had suffered somewhat, possibly just from homesickness, being so far Up West, in New Jersey.

There’s a popular country music song, “If the Bones are Good.” That song describes the mindset at Elk’s when the truck arrived with the 42-foot boat and we first laid eyes on her beautiful hull. Being a boat fanatic myself, I was aware of the Bunker and Ellis legend. Their origin story is worth repeating.

It all started with a game of pool. In 1946 Ray Bunker was the foreman at the Southwest Boat Co. where he had begun years before as a kid sweeping the floor. During the World War II era he had managed as many as 100 men. Summers he hired out as a captain serving the summer families of Northeast Harbor. He lived in Southwest Harbor and often enjoyed playing a game of pool in the evening at Jim’s Place, a local hangout. One night he was playing pool with Ralph Ellis, a hardworking local fisherman who also spent his summers captaining for prominent summer families. Bunker said if he had his own shop he’d be building a boat in the evenings, not playing pool. Ellis replied that he had a barn and would appreciate an opportunity to acquire more boatbuilding skills. Next day, Bunker ordered the lumber and the two men set to work, the beginning of a fruitful collaboration that would last for three decades. Nowadays the business continues as the Ellis Boat Company, managed for years by Ralph Ellis’s son Donny, and now by his grandson Shane.

In the beginning, Ray Bunker did the design work, making half-hull models and taking the sections off with cardboard and scissors. I learned this from Richard Stanley, who worked alongside us at Elk’s for some of the really tough re-ribbing and re-planking of Wizbee. Stanley grew up in the boatbuilding community of Southwest Harbor. He doesn’t talk much, but when he speaks about wooden boat work, or local history, I hasten to turn the radio down. 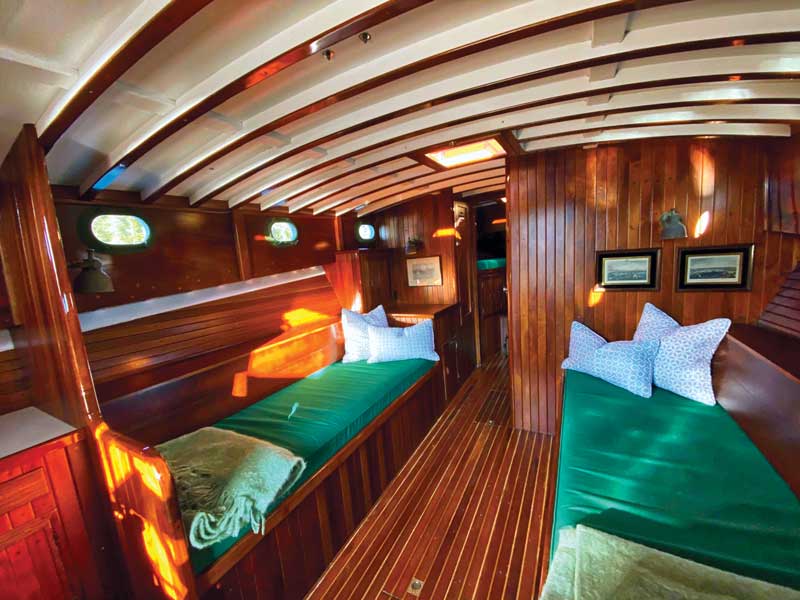 The restoration was a multi-year project, including the varnished interior. Photo courtesy the owner

Tearing into the hull was like a walk into history. The hull was framed with two layers of half-inch by three-inch wide red oak. At one point I made the mistake of stating a preference for white oak over red. Stanley set me straight: “Just as good. And their doubled frames steamed quicker and bent easier—an ideal setup for two men to do. Red oak will last finest kind. Both of them go to hell in a hurry if you let fresh water get in below the covering board.” Sure enough, a little unfairness and a little rot showed where Cat’s Whiskers had crunched up hard against a dock. We removed the covering board, and cooked up some new frames—same wood, same way.

The hull also had a few mysteries. For one thing it had both a half-inch pine hull ceiling (the smooth inner planking inside the ribs) but an additional quarter inch of mahogany beadboard. We workers did some head scratching over that. Speculation is that the mahogany was added early on by Bunker and Ellis as the pine was neither painted nor finished.

Rebuilding Wizbee was a multi-year project. Work a year ago got her in shape for cruising that summer. This year our job was to redo the interior to make the boat as beautiful inside as out. We spent hours dealing with what felt like a thousand bungs. The cabinet doors, some with steel hardware-store hinges, did not display a fit and finish worthy of Messrs. Bunker and Ellis. To make for an exquisite finish without breaking anyone’s bank, we went for an interplay between ultra-glossy Awlgrip M3131 varnish on the corner beads, door frames and edges, and fiddle rails, and contrasted this with Epifanes Rubbed-Effect varnish on the beadboard. The boat’s owner, an architect himself, entrusted the shop’s crew to make these kinds of decisions.

Regarding design, Wizbee is a unique version of a Bunker and Ellis boat. For one thing, she has the two mighty turbo-charged and intercooled diesel engines, making her very fast. When most
yachtsmen think of Bunker and Ellis, they probably envision the signature sweeping S-curve coamings and side windows—the so-called “express” profile. This was likely a design inspiration of Ray Bunker. That treatment had been done down south in sportfishing boats, but Bunker and Ellis proportioned it to look elegant on a lobsterboat hull. The vast majority of their lobsteryachts look that way. But Wizbee has a trapezoidal forward window much like her fishing brethren, with an oversized rectangular window aft. Years later Lyford Stanley used this geometry in his 36' Stanleys.

Building Wizbee, and then restoring her took lots of long hours of hard work.

Bunker and Ellis were known for their devotion to boatbuilding. “We worked nights, Thanksgiving, New Years Eve, even Christmas,” Bunker told interviewer Laurie Schreiber in 1979, not long after he retired. “Often we worked until nine o’clock or midnight, just the two of us, and we sometimes built four boats in a winter.”

That work ethic continued during the restoration. Lots of days at Elk’s, I’d report at 8 a.m. and notice that Elk had been there, in the shop until the wee hours of the morning, rolling-and-tipping a Luders hull or finishing up a 34' wooden mast for a Hinckley sailboat. In the building where Wizbee was, I’d find that Dave Partridge or Ethan Miller had been there painting or varnishing well into the evening. That first year of working on the boat, a young man named Jake Sattler singlehandedly refastened Wizbee’s entire bottom planking, replacing bronze Frearson 12 screws with 14s—all this while mostly lying on his back with the boat overhead.

Birds of a feather, Ray Bunker, Ralph Ellis, Jim Elk, and the rest of the crew who restored that 60-year-old boat—a bunch of worker bees who love the beauty of a fine boat and the reward of hard work. Wizbee was launched in late June. You can see the photos here. Is she not the prettiest powerboat that ever came from a whittled chunk of sugar-pine?