In Search of the Perfect Boat

We have just sold our boat. We’ve bought and sold many boats over the years, but this sale is unusual because it marks the first time in almost 50 years that I have been without a boat. I have owned a boat of some sort ever since I was old enough to buy one on my own; the record has continued, unabated—until now.

To suddenly be without a boat has prompted some reflection.

I don’t know how I came to have this continual boat craving. My first boat experience was a fishing trip with my father. He had rented an old Garvey, of questionable seaworthiness, and we went fishing on the Chesapeake Bay on a scorching mid-summer day. For those of you who don’t know what a Garvey is, imagine a squared-off bow, an inboard motor-in-a-box, and a tiny, airless cabin, dominated by a direct-discharge marine head. To this image, add multiple layers of peeling Navy-surplus grey paint and you will begin to understand why these utilitarian boats have fallen from favor.

We fished from the Garvey’s big cockpit, but the greenhead flies were biting more than the fish. Eventually, I did catch the ugliest fish I had ever seen—a sea robin. This lowly bottom feeder with its wing-like fins and a square face is considered a trash fish, which I found completely believable. My dad had to get the thing off my hook so I wouldn’t have to touch it. The remainder of the day-long trip was less fruitful. My memory includes a sunburn, a few dozen fly-bite welts, and a bit of seasickness. I was six. 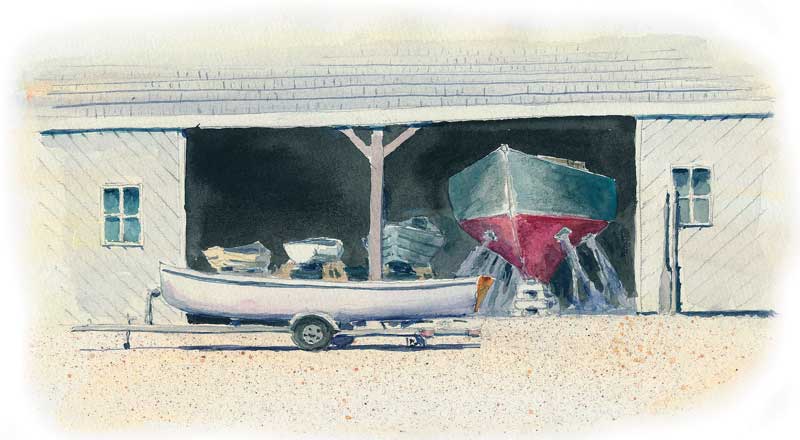 Despite this unsavory introduction, from then on I could not keep boats out of my thoughts. My dad was building a new masonry fireplace at one end of the house and part of his equipment was a large, sheet-metal mortar pan. To my eye, this looked like a boat. A creek ran past our house. Wouldn’t it flow into a river at some point, I wondered? And wouldn’t that river make it to a bay? And could that bay lead to the ocean, which could float a boat, or a mortar pan, around the world? But the pan was too heavy, and I couldn’t get it to the creek.

I went into the service in 1967 and ran a 100-ton boat along the coast and up into the bays of South Vietnam. While this, too, should have dampened my boat lust, it did not. When I got out of the Army, the first thing I wanted was a boat. My budget was less than zero; nevertheless, I managed to acquire an old aluminum skiff, and taught myself how to row, despite it being the most ungainly rowing craft ever devised—except perhaps for the mortar pan.

I knew I needed a sailboat. My first was a lowly Snark, which was made of Styrofoam and had a green-and-white-striped lateen sail, emblazoned with the KOOL cigarette logo in two-foot high letters. This was embarrassing, but it got me on the water.

When my fortunes improved, I began the search for an affordable boat that could be sailed with pride. After finding an ad for a Whitehall pulling boat with a gaff-rigged sloop setup, I sent the owner an embarrassingly low offer. To my amazement, the offer was accepted. I spent the next few years sailing this beauty whenever and wherever possible, in Penobscot Bay, in Chesapeake Bay, the Delaware Bay, and in every lake and river I could get to. Unlike the aluminum skiff, this boat was a joy to row, and I became quite proficient at the oars.

When my income increased enough to allow for a more sizable boat budget, I cast about for my next boat. This time it was a lovely English cruising cutter of six tons and measured about 34 feet from her outboard rudder-head to the tip of her bowsprit. This was sailing in the best sense of the term. Quintus slept four, and had a modest galley and a head. I sailed this boat for 34 years.

Eventually I sold the Whitehall, and bought a Swampscott dory that my wife and I restored, making a half-sunken duck house into a nice boat.

Just down from our house, the Meduncook River wound its way to Muscongus Bay, which in turn flowed into the Gulf of Maine. On the exact right day of the month and the right tide, the Swampscott dory could be pushed into the water below our house, scraped over the just-awash sill of the Salt Pond dam, and thence be rowed down the river—across the bay, and out to China, if we chose. We rowed this boat wherever we could: around Cobscook Bay, out to the islands of Muscongus Bay, and on one Christmas Day, from Thomaston to the head of navigable water on the St. George River at Warren and back—just for the sheer fun of it. 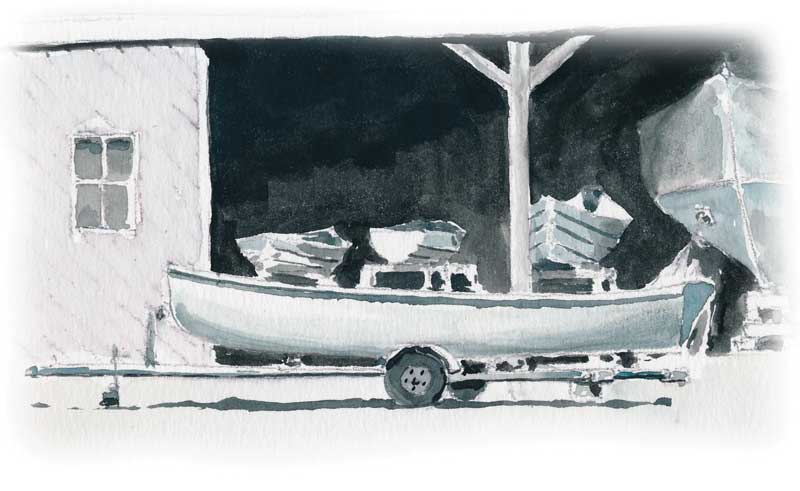 At the height of my boat madness, the cutter spent the off-seasons on boat stands next to our barn. The first barn bay held the 18' Swampscott dory, and the next bay was given over to the construction of a 20' Chamberlin gunning dory. On the second level of the barn was stored a lapstrake rowing skiff that was built in South Thomaston and which I had bought at the Cushing Historical Society auction, and an Avon inflatable that my daughters named Squeaky, because of the noise the oars made in the rubber locks. We also had a Bolger Nymph, which we built in the barn. Since she was a tender to the cutter Quintus, she was named Q-eee Two. To this menagerie, we added a 40' West Coast troller boat, which was intended to carry us off on a years-long cruise. This brought our stable up past the half-dozen mark and I still did not feel overstocked. If all these boats were lined up, end to end, they would be longer than my line of credit.

I don’t know how I managed to transfer my addiction to my wife. She began life in a sailing family in Sweden, emigrated to the United States when she was five, and lived in Lancaster County, Pennsylvania, until she was a teen. At some point she went from caring nothing about boats to a gal who now spends hours on the Internet searching for the next one. On the other hand, none of our children have succumbed to the addiction—not one of them owns a boat. I suppose that they are smarter than us, and can do the math regarding the hours-of-sailing-to-hours-of-maintenance ratio. They still want to sail on our boats, though.

Now our stable of boats has dwindled away to nothing. The South Thomaston skiff was sold to a fellow in Boothbay; the Swampscott dory went to a guy in Maryland; the cutter was sold to a Maine buyer; the troller went to Montauk, New York; the gunning dory was never completed; and the Avon was
consumed by hungry mice—a most unfitting end for a little boat that had served us so well for so many years.

Our last boat was a fun and feisty C-Dory outboard in which we blasted around Chesapeake Bay for the last few years. It’s not that we have satiated our boat lust, it is just that we have become picky about what to choose as our “last” boat. We don’t want to follow the path that one boat owner took—with a boat named Our Last Boat III. The boat-kitty sits in the bank, and we have set out on the most enjoyable activity of all: shopping for a boat.

Rick Klepfer has rarely turned down any offer to get out on the water and thus has had the pleasure of sailing in places as varied as the southern Caribbean and the Norwegian Arctic. After living for years in Cushing, Maine, he has now retired to the shores of the Chesapeake Bay.