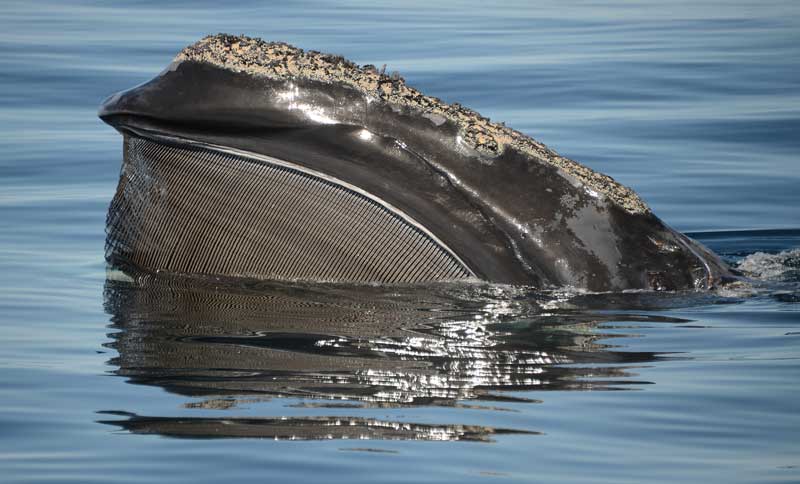 This side profile of a North Atlantic right whale feeding near the water’s surface show the parallel edges of long baleen plates clearly visible in the mouth. Photo by Elizabeth Burgess / New England Aquarium, NMFS permit #14233

As the human connection with the ocean increases in complexity, sustaining the things we value about our oceans means finding ways to measure them. Assessing and understanding the health of large whales could be a key.

These leviathans roam worldwide and hold significant influence as the largest beings that have ever lived on our planet. Whales undertake the longest annual movements of any mammal, traversing latitudes from the poles to the equator; they inhabit near-shore coastlines as well as far offshore oceanic basins; and they descend through marine zones by feeding at great depths and returning to the surface to breathe.

Yet scientists and fisheries managers historically have underestimated the indispensable role that large whales play in healthy oceans. When oceanographic study began, large whales were to a great extent absent from the ecosystem because humans had killed most of them through large-scale commercial whaling, which continued until the 1970s. Since then, many species of large whales have been slowly recovering, and scientific advancements to study these seafaring animals have progressed. We now know that whales are ecosystem engineers, and even organic ocean fertilizers, who recycle nutrients and enhance primary productivity in our seas—in short, we recognize that whale recovery and healthy populations are critical for ocean resiliency. 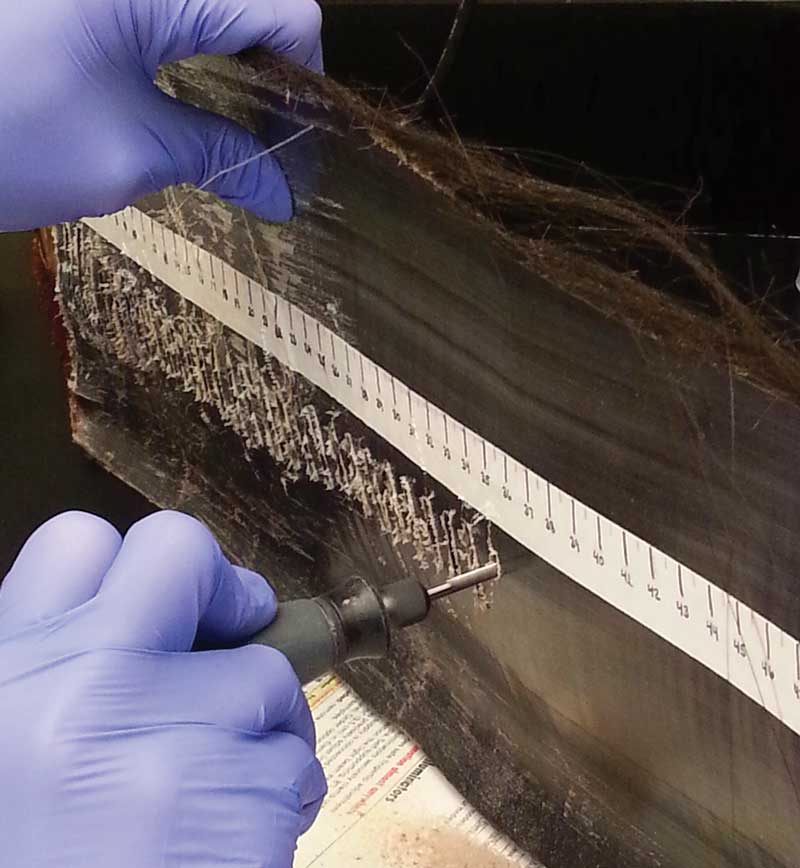 Gaining knowledge about an animal that is deep-diving, fast-moving, wide-ranging, and long-lived is a problematic feat. It requires researchers to be innovative thinkers and to engineer novel scientific tools. After all, how does a scientist give a 50-ton whale a health check? The answers, we now know can be found in bright-orange blobs of floating whale poop, clouds of expulsive breath, the longest hair-like bristles in the animal kingdom, and more than a million photographs.

The team at the Anderson Cabot Center for Ocean Life at the New England Aquarium has been researching North Atlantic right whales (Eubalaena glacialis) along the eastern seaboard for more than 40 years. This effort has involved documenting the whales’ arrival at feeding grounds, registering new calves, monitoring their movements and behavior, photographing individuals, and gathering their poop.

Yes, poop (feces, scat, dung, or any of its many euphemisms) offers a window into large whale health. It carries remnants of the body’s biological processes, in particular hormones, but also gut microbes, pollutants, and DNA from the whale and its prey. The development of noninvasive fecal hormone analyses has been revolutionary. It’s a great way to get information from animals that are difficult to track and study. Previously studying the internal health of living whales was difficult—drawing blood for diagnostics is impossible from a behemoth at sea. Historically, such information was gleaned from dead whales salvaged from hunts or strandings. 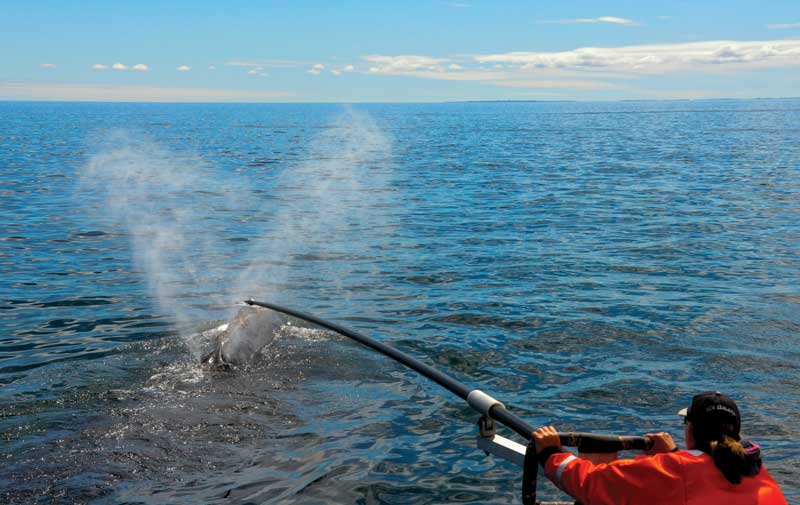 A researcher positions a collection device on a pole above the exhaling blowholes of a right whale. A sample of respiratory fluid can be used to conduct hormone analyses that provide information about whale health. Photo by Elizabeth Burgess / New England Aquarium, NMFS permit #14233

The initial whale fecal sample was collected back in 1999, kicking off the first long-term research programs on conservation physiology of large whales (over two decades of whale-poop scooping!) and resulting in the world’s largest collection of right whale poop (over 400 samples). The research focuses on North Atlantic right whales, a species on the brink of extinction (fewer than 400 left alive) that inhabits one of the most industrialized stretches of ocean in the world. Right whales are found along the coastal waters of eastern North America. They calve in waters off Florida in winter and migrate to summer feeding grounds off New England and northeastern Canada.

Unlike other fish-eating whales, whose diffuse plume of poop quickly sinks, right whales have distinctive poop. It tends to be in buoyant brilliant orange clumps due to the whales’ diet of oily, tiny crustaceans called copepods. A hallmark of whale-feces research is early mornings and long days on a boat patiently waiting for poop to float by. In the early years, the research team employed the best nose for the job—a dog. Inspired by drug-detection programs, scent dogs were trained to sniff out whale poop; the Aquarium recruited two, a rottweiler called Fargo and a Beauceron mix called Bob. In open water, the human-canine partnership requires tactful navigation to orientate the vessel relative to wind and tidal currents. Steering is guided by behavioral cues (and tail wags) from Fargo or Bob, who can smell whale poop at least as far as one nautical mile away. When a defecation opportunity presents, the feces are collected using a net and placed in a jar for later analysis. 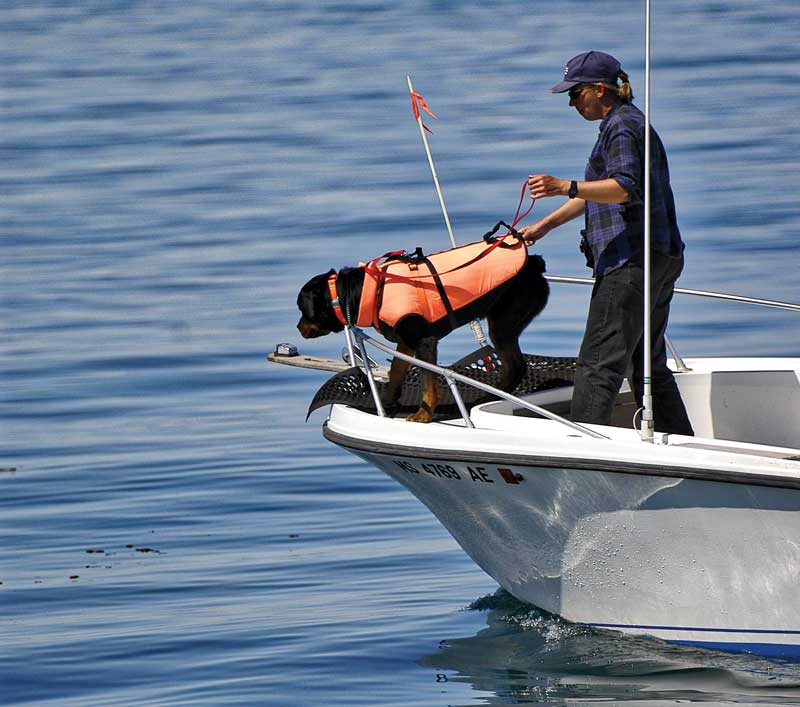 Back in the laboratory, specialized assays measure levels of hormones, which were originally released from the whales’ adrenal glands, gonads, and thyroid before being metabolized and excreted. Hormones are powerful messenger molecules that control essential body functions; measuring them provides insight into animal health and reproduction. That poop sample left floating in a whale’s wake holds data on whether a whale is pregnant, sexually mature, and reproductively active, and offers clues about the whale’s nutritional state, and, importantly, stress level. Because stress affects whales’ ability to thrive and reproduce, the research team is especially interested in studying hormones like cortisol to see how the animals respond to specific changes in their environment.

Thanks to poop science, evidence-based data has linked underwater noise from ships to a chronic stress response in the whales. New England Aquarium scientists were collecting poop samples from right whales in the Bay of Fundy on September 11, 2001, when the 9/11 terrorist attacks halted ship traffic due to security concerns. Hormones measured in the whale poop showed a highly significant decrease in stress levels that coincided with the drop in human-generated shipping noise, as recorded by underwater hydrophones. 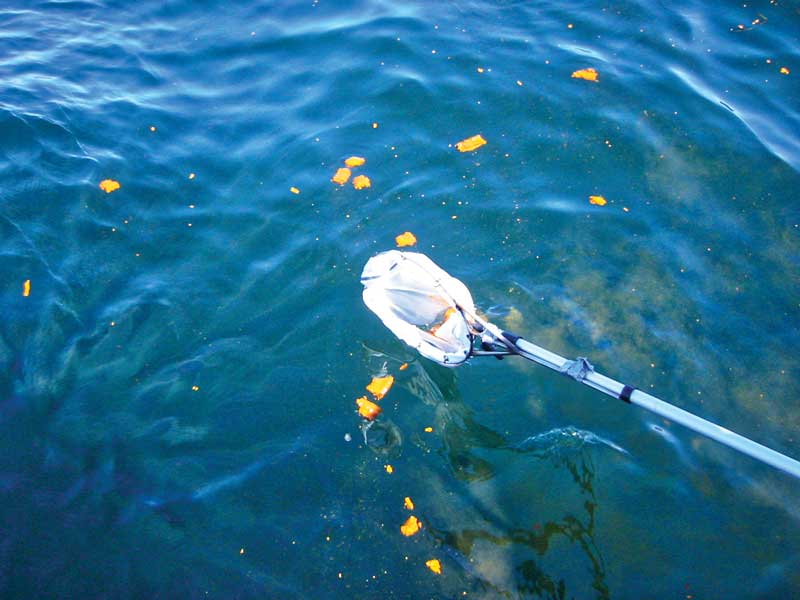 Bright orange feces of a right whale are collected at the water’s surface using a fine mesh net. Fecal samples have been revolutionary for understanding the physiology of free-swimming large whales. Photo by New England Aquarium

Poop isn’t the only material used to examine the health of large whales. As air-breathing mammals, whales must come to the water’s surface to exhale and take in fresh oxygen. This forceful expulsion of gases from enormous lungs provides an opportunity to collect a sample of respiratory fluids. Whale blow research is similar in concept to a breathalyzer used in humans, except the collection involves suspending a petri dish at the end of a 10-meter pole above the exhaling blowholes, at the exact right moment, to catch a portion of the aerosol droplets.

Since 2011, scientists have been progressively working to engineer and validate this novel approach for whale health assessment. A breakthrough came in 2015 when the Aquarium’s team quantified elevated reproductive hormones in blow samples from an adult female called Harmonia. When she gave birth to young Gully, 10 months later, researchers had the first proof that whale blow could effectively detect pregnancy.

Arguably, an even more extraordinary accomplishment has been post-mortem examination of baleen, a unique anatomical structure that toothless whales (known as “baleen whales”) use to filter food from gulps of seawater. Hundreds of these flexible plates, made of keratin similar to hair, grow downward from a whale’s upper jaw, and line up like venetian blinds in vertical formation. In 2014, researchers discovered that baleen tissue captures hormones and other biochemical data as it grows continuously throughout a whale’s life—although the older growth steadily erodes at the ends due to mechanical wear during feeding. Nonetheless, baleen’s extensive length (right whales have the longest baleen at up to 8-feet long) means that a single baleen plate serves as a record of the last decade in a whale’s life. Like reading an ice core, scientists measured reproductive hormones along the baleen shaft to reconstruct the calving history of two female North Atlantic right whales, Stumpy and Staccato. A major caveat to this approach is that baleen can only be salvaged from deceased whales. But especially in death, a whale has a story to tell. This novel approach has helped researchers understand the timeline and amount of stress felt by whales when they experienced trauma, such as chronic entanglement in fishing gear. Stress-related hormones preserved in the baleen of a bowhead whale (Balaena mysticetus) that died in Arctic waters revealed that this animal suffered an extreme stress response for more than a month during a fatal entanglement. 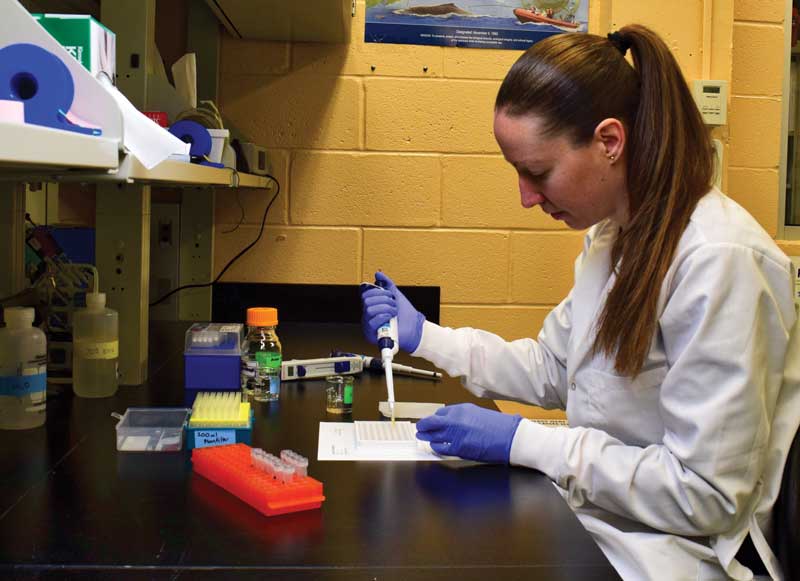 A scientist in the lab processes samples of whale feces, breath, or baleen for hormone analysis, as part of a long-term research program on conservation physiology of large whales. Photo by New England Aquarium

With large whales expected to live for more than 100 years and populations facing an uncertain future, the need for continuous study and, by extension, a historical archive of data are imperative to conservation today. Underpinning the quest to understand the health of right whales and to develop assessment technologies has been a near complete photographic census of the North Atlantic right whale population. Right whales can be individually identified by photographs of their natural markings, just like a fingerprint on a grander scale. Roughened patches of skin on a right whale’s head allow individuals to be identified from an early age, leading to life history records on the mysterious lives of each whale. The New England Aquarium maintains a catalog of all photographed sightings of right whales from the North Atlantic (http://rwcatalog.neaq.org), dating back to the first photographed right whale in 1935, which allows a whale’s life history data to be linked to any poop, blow, baleen, or other collected sample. Photographs snapped from boat and plane surveys are also meticulously analyzed for external indicators of health, such as body condition and skin lesions. This research effort is enhanced by a cooperative data sharing commitment through the North Atlantic Right Whale Consortium. Investments in long-term data and practical methods mean that efforts can reach far beyond one institution and one kind of whale, and potentially have unforeseen global conservation impact.

Dr. Elizabeth Burgess is a research scientist at the Anderson Cabot Center for Ocean Life at the New England Aquarium.