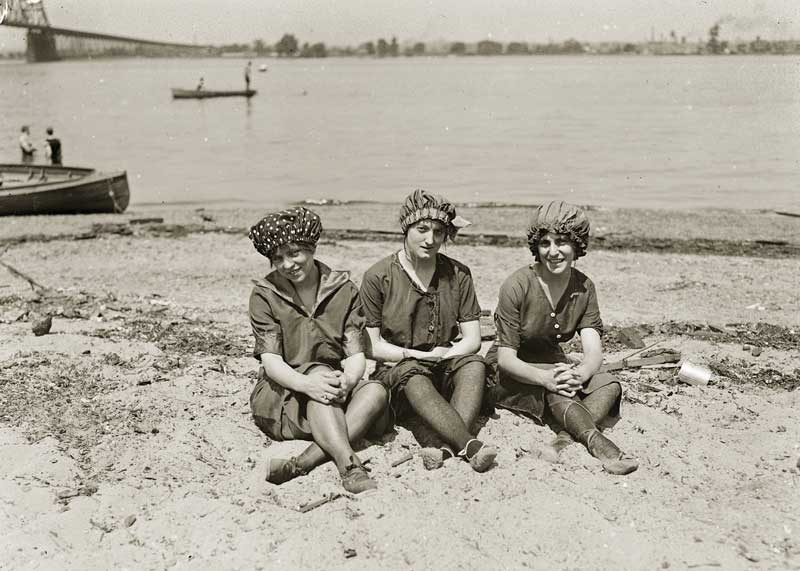 By the mid-to-late 1800s, women’s swimming costumes included bloomers, full skirts, and wide leggings that tied at the knee or ankles, stockings, slippers, and bonnets. Photo courtesy Penobscot Marine Museum Picture a balmy summer day on a rocky beach in the early 1800s. The ocean is calling; seagulls wheel overhead; what a fine day for an ocean swim. However, if you are a woman, that means covering up in order to uncover.

Seaside recreation was just coming into fashion in the 19th century, but for ladies of that era to go from street wear to swim wear, the moral codes of society required a strict regimen, so that the transformation was “decent.”

First, a woman had to enter a bathing machine, a windowless cabana on wheels, affording her the privacy to remove her hat and gloves, her shawl, gown, and shoes, her corset, and then her chemise, drawers, and stockings. In the early years, etiquette required that she not be seen walking down to the shoreline. Horses had to pull the bathing machine down into the surf, where the lady emerged out the back door and traipsed down the  ladder for a splash.

According to La Belle Assemblee Fashions, a British women’s fashion magazine of the time, her bathing gown might have been made of white French cambric, with long sleeves, worn over trousers of the same fabric, a short scarf, gloves, and leather sandals. The gown would have had multiple layers to prevent transparency when wet. Additionally, some women even had weights sewn into the hem to prevent it from floating up past her calves.

Thus attired, she was all set to wade into the surf—that is, if she didn’t sink straight to the bottom. 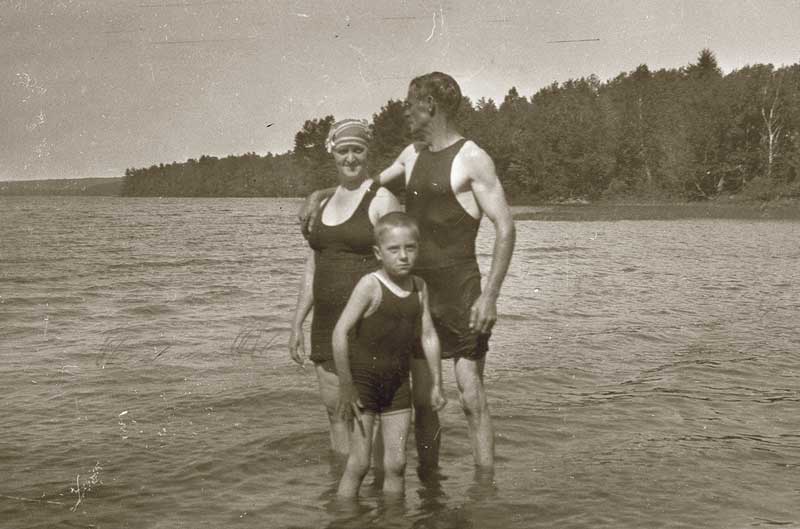 An early maker of swimming suits in the United States was the Jantzen Company in Portland, Oregon. The company’s earliest suits were knit from virgin wool. The prototype was an outfit the company made for members of the Portland Rowing Club in 1913 to wear while sculling on the Willamette River. This photo of a vacationing family in Maine was taken in the early 1900s. Photo courtesy Penobscot Marine Museum

The men of the era seemed to get away with more skin. While women’s swimwear required them to dress like a budget flight passenger layering on every article of clothing she owned rather than pay the additional baggage fees, men could basically show up to the beach like your uncle Harley in a droopy-drawered Union suit after a three-day applejack bender.

The fashion of the times clearly wasn’t predicated on safety, (because nothing’s easier to get out of a riptide than 25 pounds of sodden clothing).

Zip ahead nearly 100 years to the early 1900s, when beaches along the southern Maine coast were becoming popular vacation destinations. Ladies no longer looked like they were dressed for the cotillion as they waded into the surf. But sumptuary laws (laws that controlled personal behavior) still resulted in “bathing suit” patrolmen. They carried a measuring tape and would stop women to determine that the bottom of their bathing suit was not more than six inches above the knee. If it was, they’d receive a warrant and get kicked off the beach, according to The Dynamics of Fashion by Elaine Stone and Sheryl A. Faman.

“Laws regulated fashion back then,” said Angela Goebel-Bain, curator of historical collections at the Maine State Museum in Augusta. “In 17th-century Massachusetts, certain classes of people couldn’t even wear lace if the authorities perceived they were donning finery ‘above their station.’ It was a way of trying to control the population based on their clothing. So, it’s not surprising that almost 300 years later, laws regulated beachwear standards as well.” 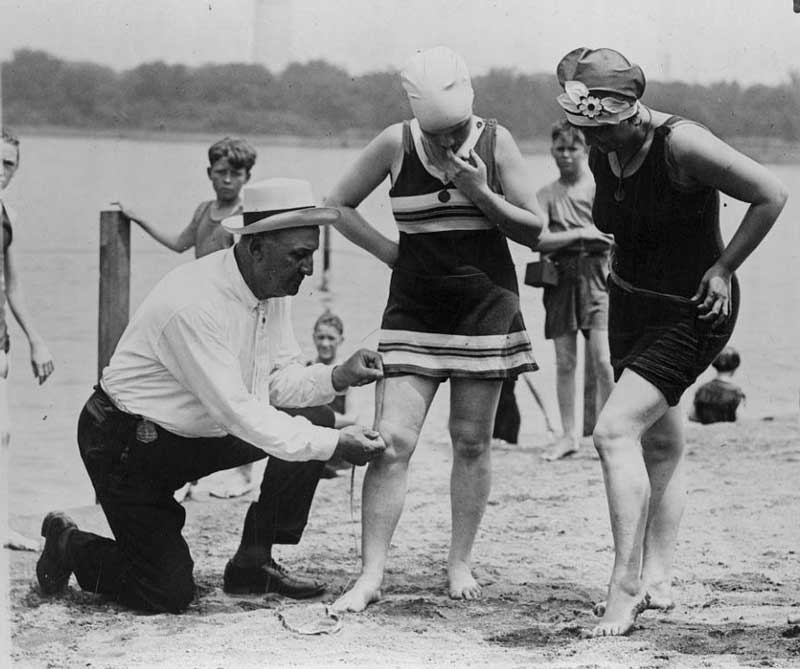 This photo of a beach in the Washington D.C. area in 1922 shows a bathing beach “cop” measuring to make sure women were complying with a city order that bathing suits not be over 6" above the knee. Photo courtesy Penobscot Marine Museum

In the early 1900s, for the more conservative types, women’s swimwear encompassed the heavy and burdensome style of black, knee-length, wool or taffeta dresses over bloomers with long black stockings, lace-up slippers, and swim caps. The upscale seaside resorts attracted a more modern type of woman, who could get away with fewer coverings, perhaps a striped, colorful dress (above the knee even!) as long as it was paired with heavy black stockings.

Horror of horrors if a lady didn’t wear some kind of neck collar with her bathing attire, for if she donned an evening gown and revealed a tanned “V” at her throat, it was today’s equivalent of walking out of the ladies’ room with the back of your skirt tucked into your tights and a tail of toilet paper hanging out.

Men at this time were donning tank suits, the precursor to the modern wetsuit, covering out to the elbow and down below the knee, but even the modern male got to shake his tail feathers with a striped tank.

A group of swimmers gathered for a photo in 1898 on Maine’s Popham Beach. Wet swimming costumes indicate that some in the group had taken a dip before the photo was taken. A 1920 article in the Portland Sunday Telegram commented on the new fashion of women rolling down their swim stockings, calling them “quite the fad.” “For the balance of the season rolled down stockings will be popular with the sea nymphs who frequent the bathing beach.” Photo courtesy Penobscot Marine Museum

One woman, vaudeville and film star Annette Kellerman, decided to flaunt convention in 1907 and showed up on Revere Beach in Massachusetts in a swimsuit that revealed her arms, legs, and neck—a costume she adopted from England. Basically, it was the same outfit a man could wear. A competitive swimmer, she was used to defying society’s expectations of women and broke records swimming most of the way across the English Channel. She often competed in swimming marathons against men and won as well.

However, to her surprise, the police were called the moment she hit the beach, and she was arrested for indecent exposure. In a 1953 Boston Sunday Globe article recalling the 1907 incident, Kellerman said it was an innocent mistake. “I was scheduled for a 13-mile meet in Boston and went to Revere Beach to train,” she said. “There were ladies there in the fantastic beach costumes of the time, dresses, underwear, corsets, shoes, complete to two antimacassars on their heads.’’

Bath houses in Prouts Neck, Maine, sometime between 1883-1910. Beaches like this in Southern Maine became especially popular in the late 1800s when railroads made travel much easier. Photo courtesy Penobscot Marine Museum

Over the last few decades, the Maine State Museum has collected a number of vintage bathing suits from the 1920s and 1930s as well as photographs of Maine women in suits.

“As social mores changed over time, the style of bathing suit changed,” said Goebel-Bain. “The early suits were made of wool and were scratchy and heavy when wet. Later, cotton was the primary material used. When it became socially acceptable for women to be athletic and participate in sports, you started to see suits made to actually swim in, as opposed to just getting wet. After World War I, in the Roaring Twenties, women began to take much more social control of their own bodies and bathing suits changed dramatically after that.”

As the decades rolled on, beachgoers continued to defy the strict social mores. By 1934, even men were brazen enough to go bare-chested on public beaches despite the threat of arrest. 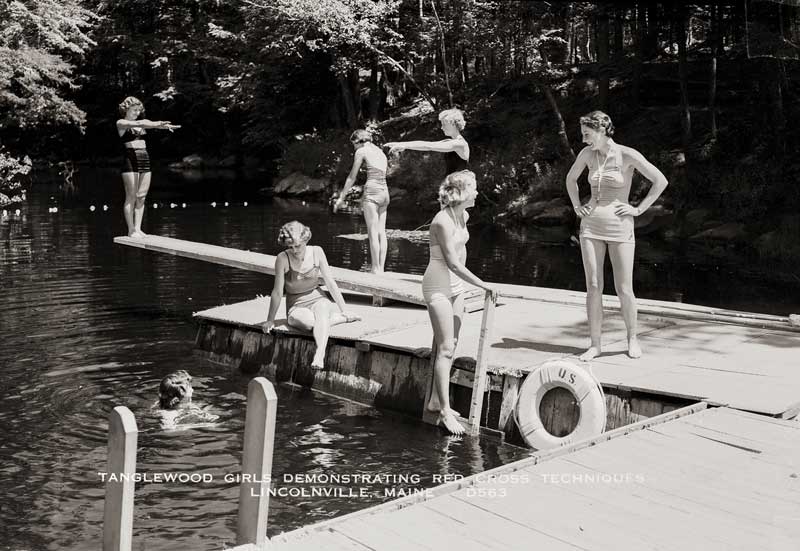 As time passed, swimwear for women went from Hazmat suits to the thong bikini, and for men, from the Union Suit to the Speedo.

Think of the vapors it might have given those in earlier centuries when the trend of “clothing-optional beaches” took hold. Most think nude sunbathing originated in the free-wheeling hippie 1970s, but even as early as the late 1920s, private clubs were formed that allowed members to practice ceremonies in the nude. 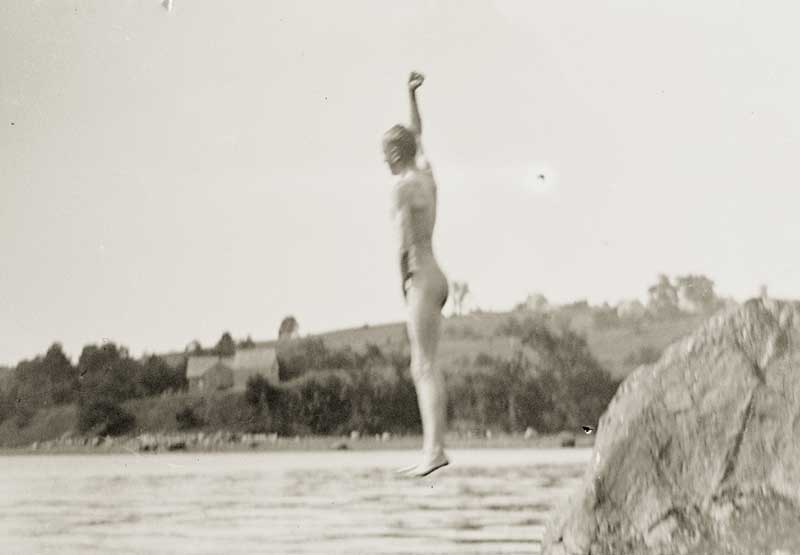 Today, the American Association of Nude Recreation lists more than 260 clothing-optional resorts, beaches, and RV campgrounds across North America. Here in Maine, no public beaches are sanctioned as clothing-optional, as the state’s “Indecent Conduct” law prohibits people from parading around in the buff. But informal online forums in Maine have suggested a few public areas and beaches that “look the other way” when women choose to sunbathe topless. There’s even a decades-old traveling club of nudists, the Maine Coast Solar Bares, who promote clothing-optional recreation in sanctioned, private areas.

With the summer of 2020 marking its place in history as Maine’s 200th year as a state, physical distancing in response to the pandemic has changed the way beachgoers relate to one another. The style of bathing suits is the least of anyone’s concerns today.

Still, one can only wonder what the Victorians, who originated the sumptuary law on beachwear, would have thought if they could see how people relax on a beach in the 21st century.

Six inches above the knee or six feet safely apart on the sand; either way, the ocean is calling and it’s time to wade in.

Kay Stephens is a Maine journalist, author, and magazine editor who lives for swimming every summer.