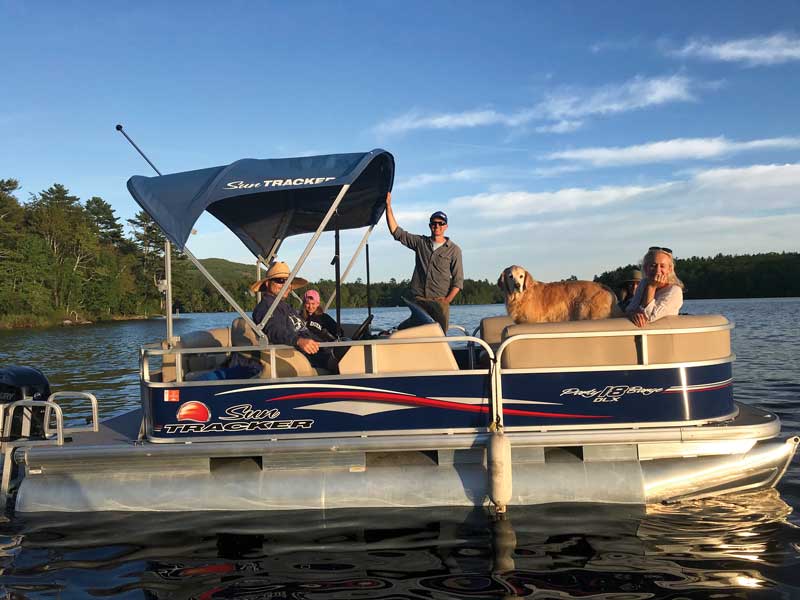 Cig Harvey, far right, and her dog Scarlet enjoy a lake ride with friends and family in Petoonia.

People are drawn to different boats for different reasons. Mine is to chill.

I was 21 when I sailed the Atlantic on a 34-foot boat with a tiller to steer and a Heinz Baked Bean can for a radar. We navigated by stars that seemed mostly to disappear. On the day the engine caught fire, a flying fish landed in the yellow bucket I was using to shave my legs. When the storms came, we sailed in circles or whichever way the wind wanted and the skipper battened himself in with a bottle of rum. Beth and I stood erect at the stern offering the first verses of Christmas carols over and over to the walls of relentless waves. 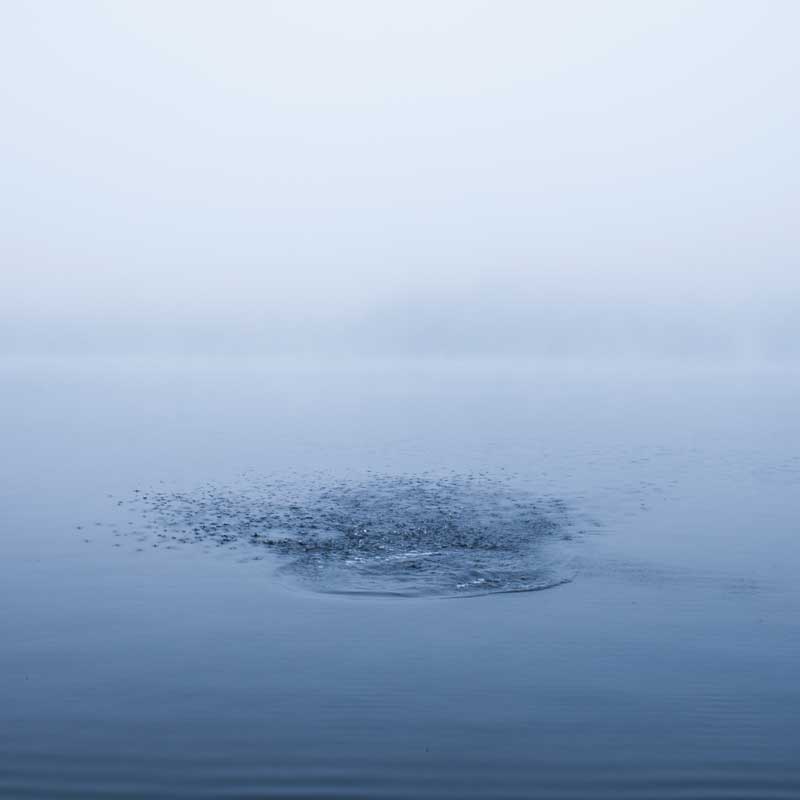 Cig Harvey took this photo, Splash, in 2016 on Megunticook Lake. Her photographs hang in major museums and this summer she will be awarded the Maine in America Award by the Farnsworth Art Museum in Rockland. Photo by Cig Harvey

But I still love boats. Somehow I feel beautiful and limitless on a boat.

In 2007, Doug and I got married and moved back to Maine. For four summers we tried a Boston Whaler on the bay, but between the stuttering maybe-maybe-not-start, two-stroke-engine, the fog and the tides, it wasn’t relaxing or that much fun.

I still like going out on the ocean; but on someone else’s boat, please, and just for the day, thanks.

I grew up near the River Thames in England, and Doug spent his summers in the Adirondacks, so we decided to try a boat on a lake. On July 10, 2016, we bought an 18-foot pontoon boat, christened her Petoonia and crashed a bottle of prosecco over the bow.* Doug adjusted his white captain’s hat as we set sail on Lake Megunticook towards the setting sun. So began the love affair. Ralph Waldo Emerson must have had a pontoon boat on his mind when he said the journey is the destination.

I’m a snob when it comes to cameras, to literature, to clothes, but I have zero snob factor when it comes to boats. When people poo-poo pontoons I offer to pick them up for a sunset cruise to seduce them. Here we are, it is a floating living room. It is a dinner party on the water.** It is a playpen for babies. It’s a casino. It’s a luxury dock. It’s a psychiatrist’s office. It is a dive platform. It’s a church. It is a dance floor. A pontoon boat is the minivan of the lake.

It is not made for the eyes. It is made for the touch. With its luxe soft squishy seats and sponge-like back rests, it is the plum pudding of boats. The design hasn’t changed much in 40 years because you can’t perfect perfection. Just ask my golden retriever, Scarlet—she is the queen of comfort. A pontoon boat is impossible to stain, looks brand new after a hose down, and it doesn’t really matter if you hit a rock or the bottom, as the hulls are metal. Just go slow. There is no rush as you’re already where you’re supposed to be.

In the past three years we have thrown countless dinner parties, cocktail hours, birthday celebrations, and breakfast cruises on Petoonia. We have sunbathed all over her, fished off of her, swam naked from her, skied and tubed behind her, held book club and sing-a-longs on her, and stargazed at midnight pondering existential problems. The night our friend Mary died, the water grew deeper as we gathered, floating in the middle of the lake, crying all over her.

In this age of uncertainty, a pontoon boat on a lake is a sanctuary. You can be present where your feet are, out in nature where the world is inherently beautiful, all the while cocooned, supported, safe.

* Other great pontoon boat names are Toon It Up, Loons and Toons, and Toon Around Bright Eyes.
** I just wish we had got the upgrade option with table inserts.

Cig Harvey is an award-winning artist whose practice seeks to find the magic in everyday life. Her work is in the collections of major American museums. This July, she is one of 13 women artists who will be awarded the Maine in America Award, presented by the Farnsworth Art Museum. She is represented by Robert Mann Gallery in New York, Robert Klein Gallery in Boston, and Dowling Walsh Gallery in Rockland.