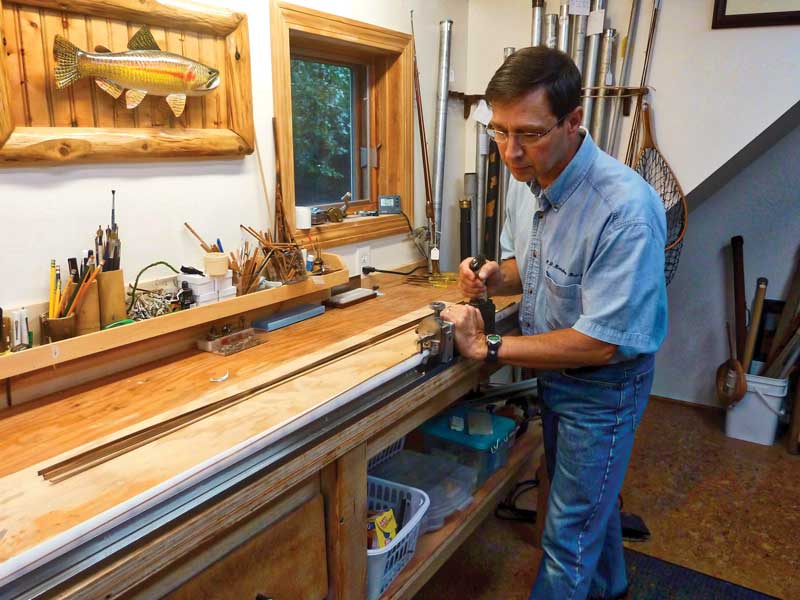 Experienced practitioners of fly fishing say handmade bamboo fly rods have an extra special feel, and Fred Kretchman knows this to be true. Fishing rods aren’t only about catching fish, he explained. It’s about the experience—the memory of being on the water, soaking up the sights and sounds of nature, enjoying the feel of a perfect cast.

As a boy, Kretchman fished with his father for bass and bluegill using bamboo fly rods. In 1993, that pastime became a career with the establishment of F. D. Kretchman Rod Co. in Kittery Point, Maine. Here, Kretchman carefully crafts rods one at a time, using select bamboo cane imported from China. 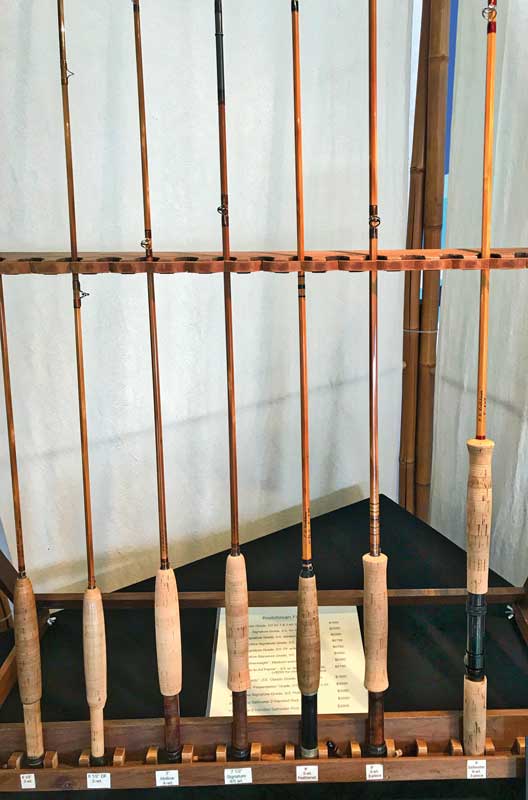 The rods, handcrafted by Kretchman, range in price from $1,850 to $3,000. Photo by Polly Saltonstall “Someone once called fly fishing the poetic way to fish,” he said. “It’s very different from someone who wants to fill the bucket with fish for the dinner table.”

Born in an Army hospital at Fort Knox in Kentucky, Kretchman moved around a fair bit as a child. Trout fishing in the mid-sixties with his father, on the Big Manistee River in Grayling, Michigan, is a favorite memory.

“I’d probe the mucky backwaters for brookies, the prettiest fish I’d ever seen,” he said.

While working as human resources manager for a printing company in Milford, New Hampshire, he still enjoyed fishing, but was using a rod made of carbon fiber, also called graphite, by then.

In 1990, while watching a friend cast for salmon using an old bamboo rod, he was enchanted by the grace of the cast. Inspired, he bought an antique bamboo rod for $72 at a small country auction and found that, indeed, compared with graphite, it was a joy to cast.

From 1993 to 2008, he built rods and sold them as a side gig. Then, in 2008, Kretchman married a woman from Maine and gave up his corporate career. The couple settled in Kittery and he opened shop full-time in a workshop next to the house. 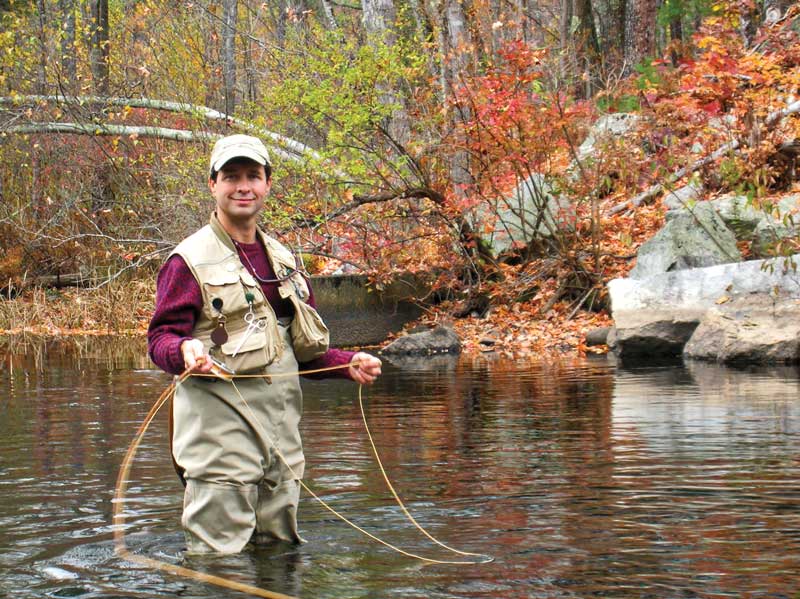 Kretchman does some autumn fishing in Maine for landlocked salmon, using one of his bamboo rods and streamer flies. Photo courtesy F. D. Kretchman Rod Co.

In the 1990s, while first learning the craft, he used a 1976 book called A Master’s Guide to Building a Bamboo Fly Rod, written by Hoagy B. Carmichael (son of the famous American singer) in collaboration with Everett E. Garrison, who was known for his exacting methods of building rods.

“It’s the bible for people who want to make bamboo fly rods,” said Kretchman. “I met Hoagy after I’d been making rods for two years and we’ve been friends ever since. It was through him and his book that I was able to learn how to build rods.”

The timing was fortunate. There was a resurgence of interest in fly fishing, due largely, said Kretchman, to the 1992 Robert Redford movie A River Runs Through It. Based on the 1976 Norman Maclean book of the same name, it tells the story of two brothers in Missoula, Montana, who love fly fishing.

“That movie propelled the sport of fly fishing to the front of many people’s lives,” Kretchman said. “We saw many more people getting into it. For years it was the fastest growing sport in the U.S.” 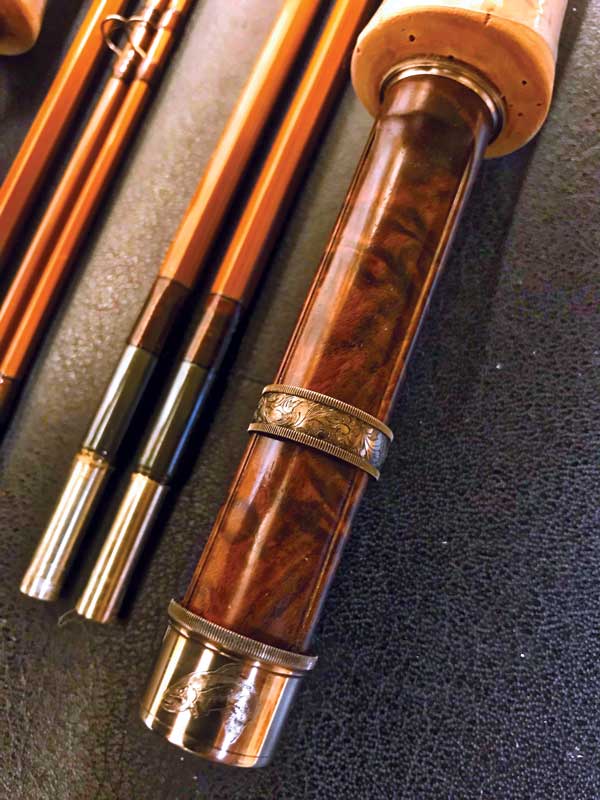 The finished presentation rod at right shows the burled black walnut reel seat with an engraved nickel silver cap and sliding band.  The nickel silver ferrules at left are from the accompanying tips for the rod. The rod was commissioned as a retirement gift for a  ski resort  manager in New Hampshire. Photo courtesy F. D. Kretchman Rod Co.

Bamboo, which is a grass, came into use for making rods in the mid-1800s; before that, rods were made of wood. Bamboo proved ideal because it could be split into strips, which were then tapered and glued to create a light, strong rod.

By the 1870s, there were a number of makers in the United States, Kretchman said, including Maine’s Hiram Lewis Leonard. He founded the H.L. Leonard Rod Company and is regarded as the father of the modern fly rod.

“He hit upon the fact that you could make a machine to taper these strips of bamboo to incredibly thin dimensions,” Kretchman said.

After World War II, trade embargoes with China made it difficult to get bamboo. Fiberglass was invented around the same time.

“Fiberglass quickly replaced bamboo,” he said. “People could make fishing rods inexpensively and didn’t have to rely on getting material from overseas.”

Later, graphite proved lighter and stronger than fiberglass. “Today, 99 percent of fishing rods are made from graphite,” said Kretchman.

The art of making bamboo rods was almost lost, he said. Then Carmichael and Garrison’s book came out.

“For the first time, we had a detailed guide with a lot of photos,” he said.

Kretchman’s rods have actions that are similar to the old classics, thanks to bamboo’s inherent qualities. It excels at transferring energy from the arm’s movement in casting a line. With bamboo, “you can cast all day and not be fatigued,” Kretchman said. Bamboo is durable and strong, yet flexible when cut into fine strips. “It’s an amazing material.”

Each rod is crafted individually, beginning with six carefully measured strips of cane that are cut and tapered from the same “culm,” or stem of bamboo.

Kretchman complements the bamboo with high-quality components that include customized nickel silver ferrules. Reel seats are turned from domestic hardwoods and select exotic woods, then hand-rubbed to highlight the wood’s grain. The guides through which the fishing line is threaded are carefully crafted from materials such as nickel
silver and agate.

It takes from 45 to 65 hours to build each rod, said Kretchman, who makes 12 to 15 rods per year. He also offers repairs and restorations on antique rods, professional appraisals, and workshops.

Every order is individualized.

“Normally people buy their first rod, then come back and buy two or three more,” he said. “They might buy a rod suitable for fishing small brooks, then want a larger, heavier rod for big water and larger fish, then a rod for saltwater fishing.”

He treats each one as a work of art.

“I make something that isn’t just an instrument to fish with, but is aesthetically appealing and casts like a dream,” he said.

Often, customers request special engravings, like the grizzly bear and California poppies requested by one West Coast couple for their individualized rods. The conversations he’s had with customers have made it a very personal business.

“When I make each rod I can visualize that person, when they’re going to fish, how they fish,” he said. “I work on their rod start to finish, not more than one at a time. We’ve met so many wonderful people through this business.”