The “Cadillac” when it comes to workmanship 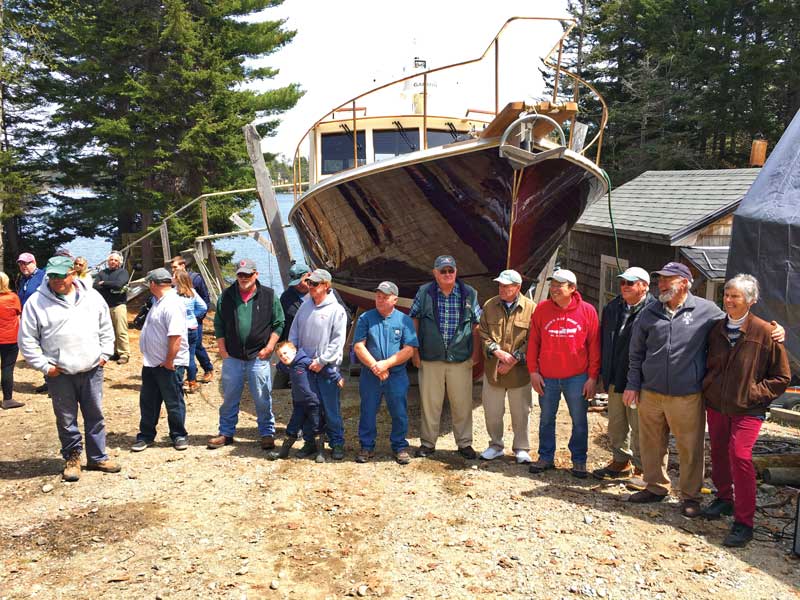 The group photo has become a custom at every John’s Bay launch: John’s Bay boat owners line up in a semi-circle in front of the soon-to-be-floated newest addition to the fleet. Photo by Polly Saltonstall

I’ve probably heard a variation of the same statement about every lobsterboat built by John’s Bay Boat Company in South Bristol, Maine: “It’s a shame to put a bait box aboard something that looks this nice.”

Make no mistake, though; the 73 wooden vessels Peter Kass and his crew have turned out since the shop opened in 1983 aren’t just a bunch of pretty faces. A good percentage have been commercial boats, built to fish hard. It’s just that Kass and company simply do beautiful work.

Bow-on, the only real hint that Lori Jane is a workboat might be the davit on the starboard side. That is if you can pull your eye away from the graceful sheer and enough-but-not-too-much flare. Circle around and clues to the intended use appear: the split wheelhouse and outside hauling station, the open stern for ease of setting lobster gear, and the trap rack mounted on the port rail. 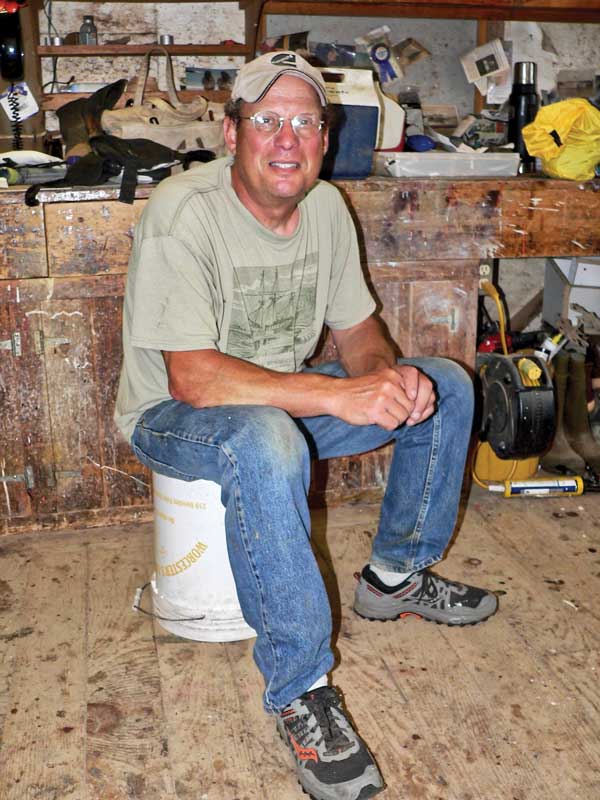 Peter Kass has been relying on his own hull designs since 1994. Photo by Brian Robbins The phrase “Cadillac lobsterboat” surfaced a number of years ago in regard to this shop’s work. But that could be misleading. The boats from John’s Bay may be “Cadillac” when it comes to workmanship, but Peter Kass argued his shop’s work is competitive price-wise compared to a custom-finished fiberglass boat.

“I’m thrilled to build somebody a ‘good ol’ lobster boat’—something with a hauler and an engine that’s built to catch lobsters. We’ve done them and they’ve been great projects,” said Kass. “We’ve also done the fancy boats, both commercial and pleasure, for the guys who want the gizmos and tricks and use them and enjoy them… that’s nice to see, too.”

“But,” he continued, “I’m every bit as proud of the simple boats as the fancy ones. I guess I’m most proud of what they do, rather than what they are.”

Those are the words of someone who loves what he does, but Kass does not come from either a boatbuilding or fishing family.

He grew up in Arlington, Massachusetts, where he was a mediocre student and hated school. He knew even then that he wanted to build boats. After a stint with a builder in Urbanna, Virginia, Kass made a pilgrimage north to Maine “because everyone said, ‘If you’re going to get into boatbuilding, Maine’s where it’s at.’”

The trip bore fruit. He joined the woodworking crew at Gamage Shipyard in South Bristol, which was beginning to tackle the 86' Appledore II. The last wooden project launched by the yard, Appledore hit the water in August 1978. 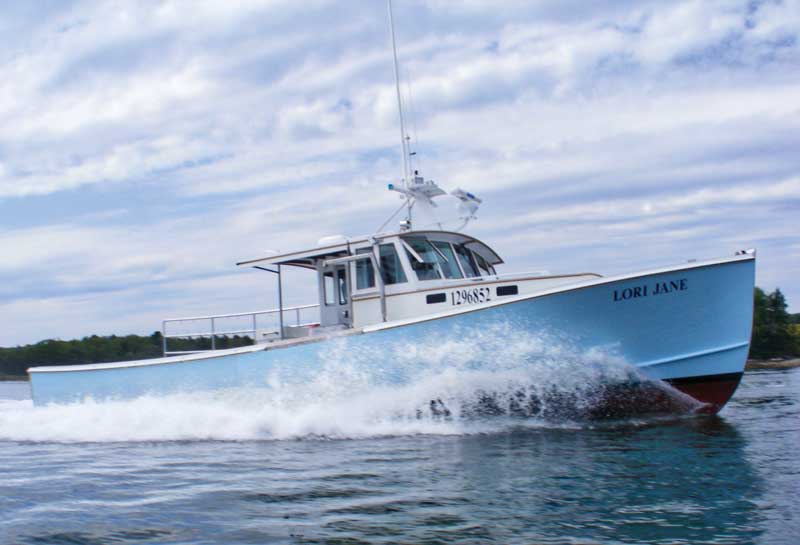 Ed Munsey’s Lori Jane is a sleek 45-footer with a 15'8" beam. Munsey describes her as very steady and fuel-efficient. Photo by Brian Robbins

Over the next few years, Kass furthered his woodworking experience with stints at Goudy & Stevens in Boothbay and Padebco Boats in Round Pond. In the meantime, he did some moonlighting on the side, including building a string of peapods.

Eventually, it became clear to him that the best chance to work in a shop focused exclusively on wooden boats was to start one of his own.

When a piece of land bordering Johns Bay in South Bristol became available, he bought it and invested nights and weekends into turning it into a working boatshop and railway. In the fall of 1983, John’s Bay Boat Company was open for business.

A connection with the late designer Carroll Lowell was forged early on when a Massachusetts lobsterman approached Lowell in 1985 about a new 42' boat. Carroll offered to do the design work, but steered the customer to John’s Bay for the project itself. “By doing that, Carroll really got the ball rolling for us,” Kass said. “We launched that boat in 1986 and started getting calls.”

For the next eight years, Kass relied exclusively on Lowell for design work. It wasn’t until 1994, when the workboat market “was really leaning toward the beamier, bulkier hulls—the guys wanted the deck space,” that Kass drew up his own full-size lobsterboat design: the 41' Acadia for Mike Campbell of Plymouth, Massachusetts.

“It was definitely what the market called for at the time,” said Kass. “If we were going to build boats, it’s what we had to do… and it seemed to work.”

Since then, he has done his own hull designs, sculpting each one to fit the owner’s needs. In the case of the recently launched Lori Jane, 52-year-old lobsterman Ed Munsey wanted his 45-footer to carry as much of her 15' 8" beam as she could back to the transom to accommodate a set number of traps per row. This meant deviating from the traditional tumblehome John’s Bay usually builds into their hulls—in fact, the aft quarters tip out slightly. 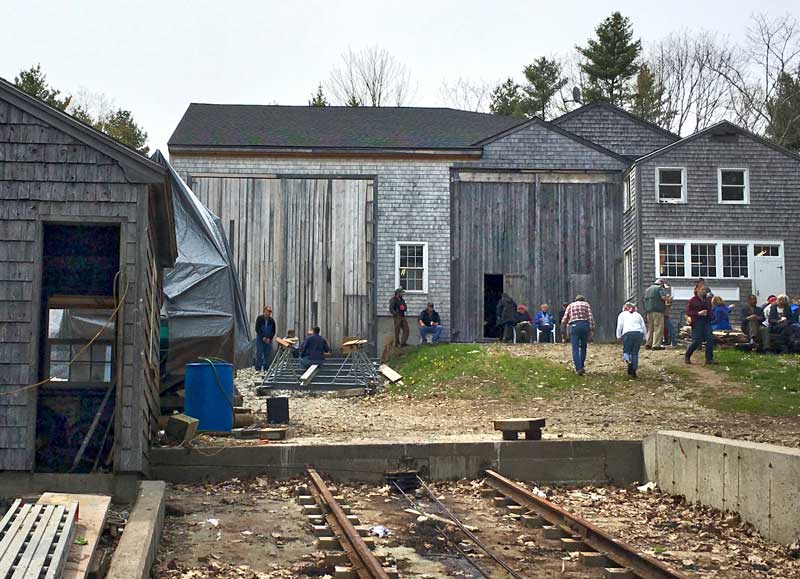 The view from the head of the yard’s marine railway, looking up at the John’s Bay shop. Photo by Polly Saltonstall

“She’ll cruise around 19 knots,” he said. “And I’m burning less fuel than I did in my old 42-footer.” Munsey also gives Lori Jane high marks for steadiness.

“I know we’ll give her a real test this fall and winter,” he said, “but I’m already impressed with how steady she is. Even with her own wake: some boats will roll and roll, but she just goes up, comes down—and stops. That’s it. And I imagine she’ll only get better as she soaks up.”

All that, and good-looking, too.

Peter Kass will be the first to tell you: John’s Bay Boat customers are a different breed of cat. They share a feeling of belonging to something—a pride in owning a John’s Bay.

Launches at the South Bristol shop are sort of an old-home week, with many John’s Bay owners in attendance. A group photo of the skippers has become a launch-day tradition.

The aroma of simmering lobster chowder mixes with whiffs of cedar and oak in the shop. It’s a reunion for old friends and family. There’s the solemnness of the blessing, the chug-chug-chug of the faithful 292 Chevrolet firing up in the winch house, the thwock of the champagne bottle busting against the stem, the rumble of the cradle as it sets off down the runway, and the cheer as the boat floats clear.

And every one of those John’s Bay owners will be smiling.