Welcome Downeast The Town, the Bays, the Mountains

We got a real snowstorm this past week to bring March in with a roar. While the wind blew and the lights flickered and the sound of breaking branches was heard on the wind, we were getting as much as three inches of snow an hour during the height of the storm. When it all died down there was at least a foot of heavy wet snow on the flat, and drifts higher than that in some places: A classic snow storm, and it was beautiful. Speaking only for myself, I would have felt cheated if we hadn’t gotten at least one storm like this before spring comes waltzing in. After the storm the sun broke through and soon enough we heard the chickadee’s chant and the mourning dove’s doleful call, as they resumed their courting for another year—unforgettable, until we get another storm just like it.

Mice tunnel under the fresh snow while predators like owls, hawks, foxes, and coyotes, wait to make their move and fill their bellies. Watching a fox mousing is a little like watching a robin worming. Brother Fox walks softly through the fields of white cocking his head to listen for the mouse running through its tunnels under the snow. Suddenly, he leaps and dives snout first into the drifts, often rising with a mouse in his teeth and a tip of frosting on his nose.

It’s comforting to know that lovely Lady Spring is about to officially sweep on stage, and yet we also know that grim Old Man Winter can come blowing back with little warning. When spring comes, can winter be far behind? Older New Englanders may recall a big snow storm on Mother’s Day back in the late 1970s. We rarely see apple blossoms or lilacs until Memorial Day. And yet, this week the chickadees are singing their spring song, the starlings are returning, and the maple sap is rising. So the line between the seasons is not as clear as we would like to pretend.

As the change comes between day and night, youth and age, life and death, there can be a very long twilight. Some days I feel 20 years younger than I am, and some days 20 years older. Those who work with the dying will tell you that in its final hours the soul often travels back and forth between this land and the next before it leaves for good. Spring is the same. While the crocuses push up and the buds swell down in town, it’s all snow and ice in the dark woods on the high north slopes of Awanadjo.

Winter is over, thank Heaven. Thank Earth, too. She is once again showing us what we knew all along, but very nearly forgot: that She will not die, despite the ice and snow, the bitter wind, the many deaths, and the long darkness. While the ice disappears and we hurry with our late pruning, crocuses bloom in warm, sheltered places and the grass greens up on south slopes. The brooks and streams rush with the earth-scented, tawny waters of run-off, while dogs and cats stretch and stay out longer when let out in the morning, and rest on the sunny side of the house outside in the afternoon. Blackbirds add their chirping chants to those of mourning doves, cardinals and blue jays. Sunlight pours in the windows. Even house-plants perk up and start putting out new buds and blooms—as without, so within. The gut-feeling of spring is in us, visceral and real. Like sap in the maples, our blood rises. Like flights of birds, our pulse quickens. Like the breast of the earth, our hearts warm and swell. Like the whole land, we are brought back to life, and oh boy, it’s great! 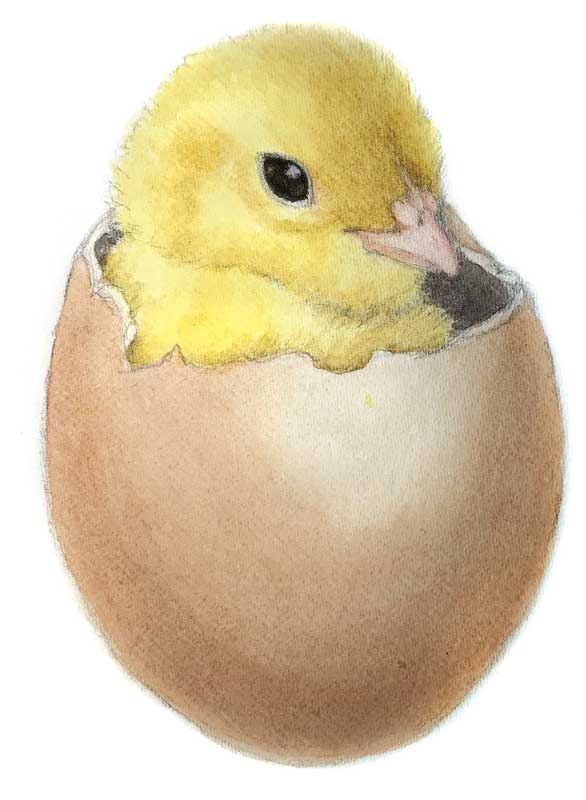 Illustration by Candice Hutchison Willow branches by the streamside are turning yellow or red and pushing out their soft, fuzzy catkins, and streams are running to the sea. But apple and maple buds are still hiding behind their shiny bud scales waiting for a little more warmth. On the farm, lambs and calves are coming forth to crunch around on the frozen ground on tottery new legs. And chicks will soon be hatching in the incubator if they haven’t yet. We look forward to April as the first full month of spring, but, as T.S. Eliot reminds us, April can be cruel. The old-timers used to say that all we had to do was “get over March hill,” but around here once we get over March hill, we see April spread out before us looking a lot like what we just left behind. This is why we watch the little changes now, what scientists call the “phenology” of the season, the little hints of the big changes coming in May. We wait, we stretch in the sun, and we dream of the Eden to come.

If an April snowstorm, like the one we had this past week, still looks beautiful to you, you are either a romantic, a seasoned uplander, or a little soft in the head. The morning after the storm, the recently returned song sparrows were cheerily piping their sweet tunes across the white fields, the pussy willows were shaking off the snow, and the long lush alder catkins were doing the same. Newly-arrived ospreys and turkey vultures circled on high looking for a bite to eat after their migration. Because the snow came down onto mud, many plowmen chose not to plow driveways at all so as not to do more damage than good. That means that many of us just waited for it to melt and went on with our lives. And why not? Isn’t that what every other creature does?

Do you hear the robins chirping their jubilant rain song? Robins love the rains which soften and warm the frozen soil and drive earthworms up to where red-breast can feed on them. No wonder they’re happy… the robins, that is. They give voice to the silent elvers sparkling their way upstream and to the shining alewives just now coming up from the sea. Can their joy be any less? Adding some percussion to the chorus are the wood frogs clacking away at the edge of the pond, while peals of thunder fill in the bass. And soon the spring peepers will add their piccolos to the ensemble playing the long-awaited and widely-acclaimed symphony of spring.

Like their slightly larger cousins, the bald eagles, ospreys were once few due to the ravages of DDT. But now they inhabit every continent but Antarctica circling and chirping over the waters, then folding their wings and dropping like a stone into the waves to rise with a quivering fish in their talons. Once from our back door I looked up to see an eagle attack an osprey which dropped its catch to be caught in mid-air by the eagle.

An op-ed in the New York Times last year  (3/8/19) by the Dutch primatologist Frans de Waal opened with a bold statement: “Uniquely human emotions don’t exist. More and more I believe that we share all emotions with other species in the same way that we share virtually every organ in our bodies with them.  No exceptions.” This declaration would be no surprise to most children who talk to animals, feel for them, look out for them, love them, and even refuse to eat them until we “grown-ups” talk them out of such foolishness. It would be no surprise to indigenous people, either, who consider all living things to be related. The prevailing rationalistic view in Western society, at least since the time of Descartes [1596-1650], has been that animals do not have feelings, that they are essentially meat that moves. This has served to bolster the idea that animals and all the rest of Creation are here for us to use in whatever way we choose.  More recently, though, decades of scientific observation have hammered away at that idea. Science continues to show that children and indigenous cultures were right all along. Animals are our kin in every way. Frans de Waal’s book is Mama’s Last Hug: Animal Emotions and What They Tell Us About Ourselves.

From Harriet Ann Jacobs: “The beautiful spring came: and when Nature resumes her loveliness, the human soul is apt to revive, too.”

Rob McCall splits his time between Moose Island and Brooklin, Maine. This almanack is excerpted from his radio show on WERU FM (89.9 in Blue Hill, 99.9 in Bangor, and streamed on weru.org).