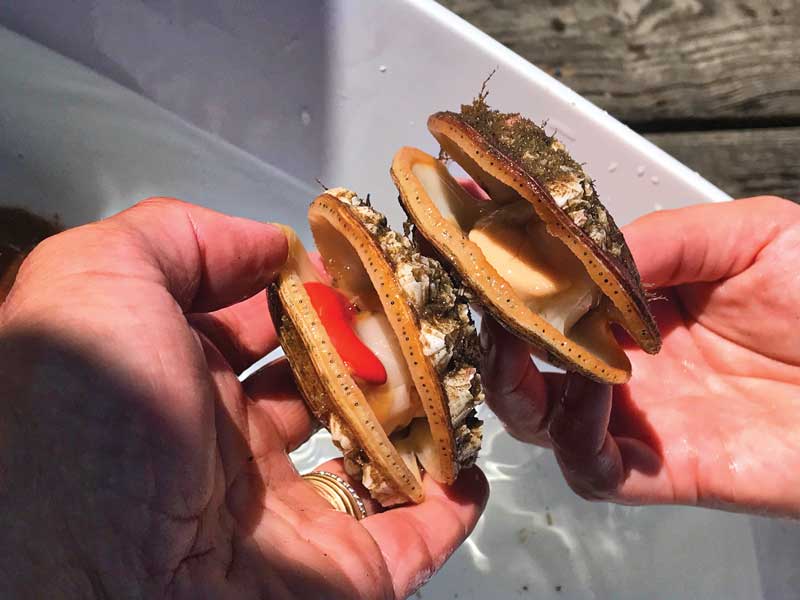 Mature male scallops can be identified by their white gonads (top) versus females which have red reproductive organs (bottom). The little black dots along the edges of the shells are eyes. Scallops can have dozens of eyes which they use to detect changing patterns of light and motion around them. These scallops were photographed at the Hurricane Island Center for Science and Leadership. Photo courtesy Polly Saltonstall

In 2013, on a cold and cloudy spring afternoon in Rockland, Maine, a sundry group of people gathered around a chart to design an experiment. The assembly included scallop fishermen, fishery managers from the Maine Department of Marine Resources, scientists from around the state, and staff from the non-profit Island Institute, where the meeting was held.

While Maine has a rich history of the fishing industry and scientists working together on projects, this particular project was unusual. Some scallop fishermen wondered what would happen to the scallop population if they voluntarily closed a small area to fishing, and they wanted to work with scientists to design a study around that thought. In the past, fishermen had come to scientists for answers, or scientists asked their own questions. This project from start to finish was a partnership, with fishermen and scientists working side-by-side.

The collaboration would not only reveal the positive impact of a fishing closure on scallops, but the importance of trust and support between fishermen and scientists—relationships that can make or break a worthwhile fisheries research project. 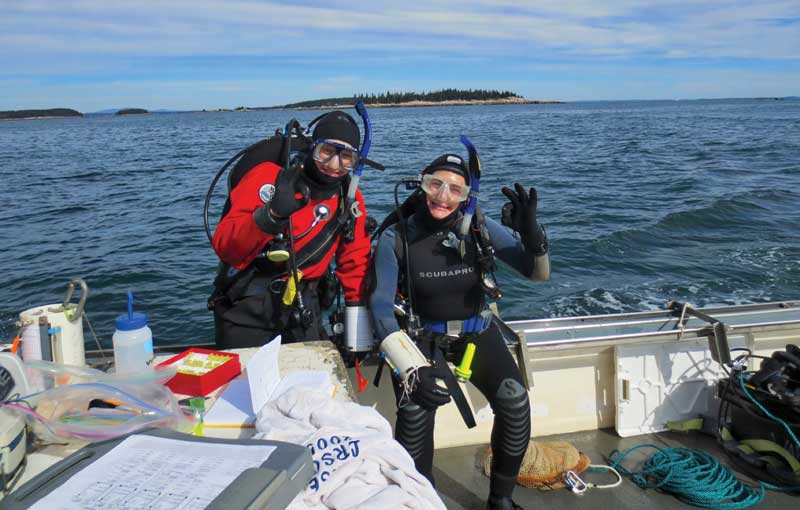 The group chose a fishing area to close for three years, and worked together on what became the Midcoast Maine Collaborative Scallop Project. To get the ball rolling, the group of fishermen approached Trish Cheney, then resource manager at the Maine Department of Marine Resources, and the Island Institute, which ended up partially funding the project, just as DMR was conducting rule-making for the scallop season that started December 1, 2013. Maine is the only U.S. state with an inshore scallop fishery, and was suffering a decline of scallop populations in the early 2000s, similar to what the federal offshore fishery experienced in the 1990s. Inspired by scallop closures on Georges Bank, managers at Maine DMR along with the help of local fishermen, chose areas along the coast to close between 2009 and 2012. In 2013, DMR was deciding on rules for which areas would be open again to fishing and which were to remain closed. That made the timing for this project perfect.

After a long and contentious discussion, the fishermen agreed to a 1 kilometer by 3 kilometer closure on the Lower Muscle Ridge channel in Penobscot Bay. It was a small area; 20 of these closures could fit on Manhattan Island.

Next came the work to design a research plan. The team of scientists and fishermen needed enough information to tell a story.  Did the number of scallops increase over time? Were little baby scallops settling every year? Were scallops getting big and old? Could the DNA from scallop tissue samples tell the team where the scallops came from? Did the answers to these questions differ between areas open to fishing and the closed area? 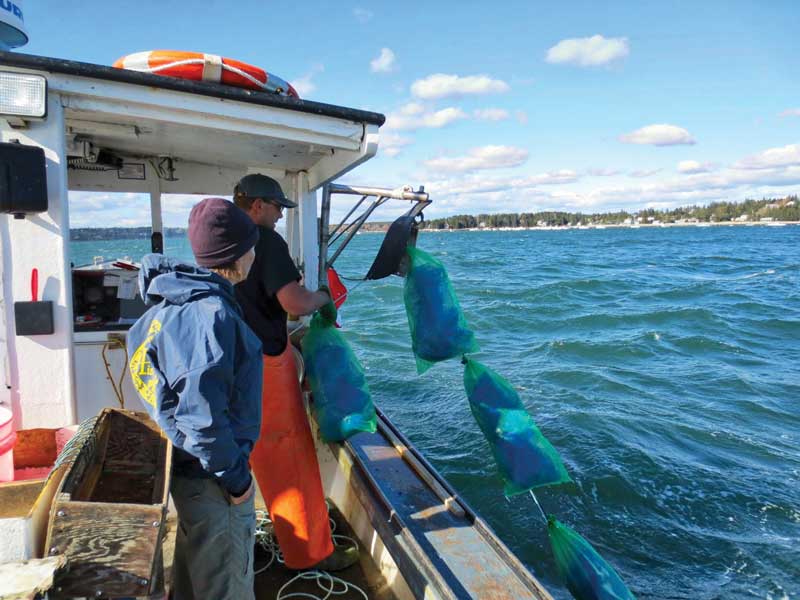 Lobsterman Erik Waterman helped with the project, driving his boat and helping set out spat bags, which are designed to trap scallop larvae. Photo by Caitlin Cleaver

The scientists decided to survey scallop populations yearly with teams of divers. There were dedicated survey sites inside the closure, to the north, and to the south. At each site, a pair of divers went down to the bottom and swam shoulder by shoulder, collecting data for 100 meters (330 feet), and then returned to the surface. The divers used the volunteer fishermen’s boats and expertise to identify suitable scallop habitat at each randomly selected dive site. Initially, four fishermen stepped up to take the divers out for surveys; others donated time on their boats to drop cameras for surveys, and/or offered their wharves for access.

Fishermen’s knowledge of bottom type and currents helped the team create and execute efficient and safe dive plans, said Phoebe Jekielek, who has a masters in marine science and marine policy from the University of Maine and now works as program and research director at the Hurricane Island Center for Science and Leadership. Both UMaine and the Hurricane Island center participated in this project.

“We fully rely on the fishermen’s knowledge base and their number one concern is safety. We have all learned so much from them,” said Jekielek. If logistics of a dive operation aren’t properly designed, it can use up one of the most precious commodities in diving: air-time, said Cait Cleaver, who was working for the Island Institute in 2013 and volunteered to be project coordinator.

“The first year of diving, I was using air really fast,” she said, but this greatly improved once she got used to the project and more importantly, the deployment was adjusted. 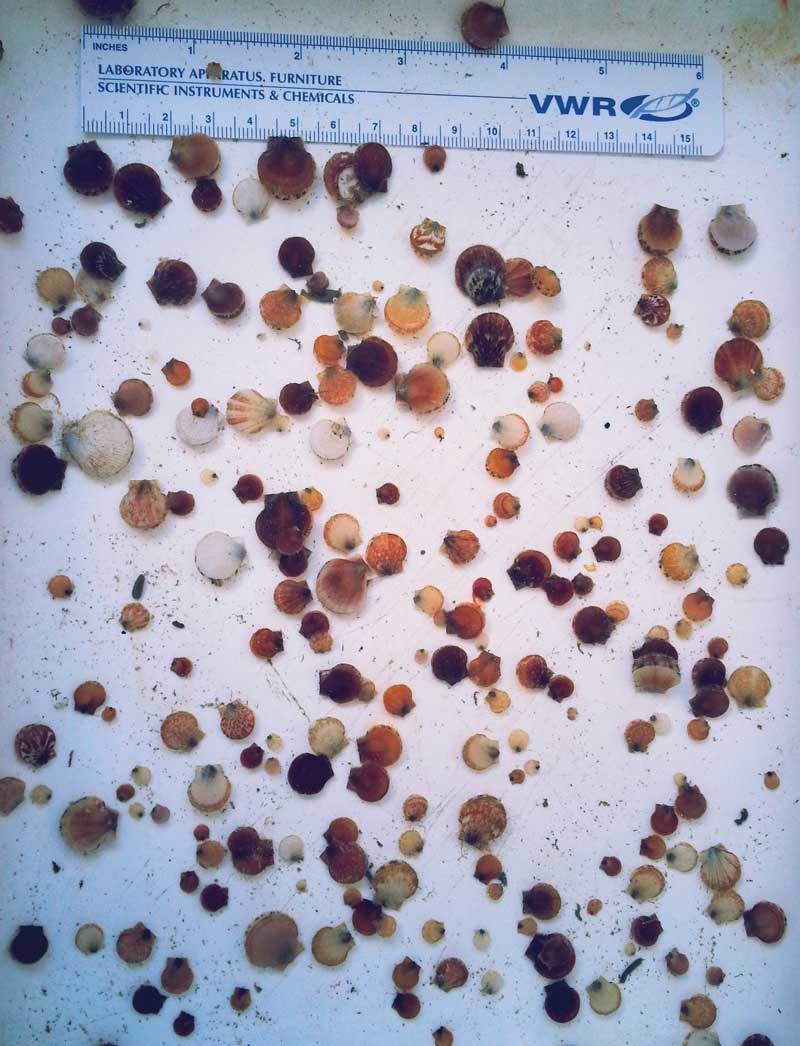 This image shows some of the juvenile scallops that were collected from spat bags that had been set out for nine months. The largest ones are less than an inch wide. Photo by Skylar Bayer Most of the volunteer fishermen, if not all, also fish for lobster, and are accustomed to deploying and retrieving lines from trawls of traps. Carl Wilson, Director of the DMR Bureau of Marine Science proposed something similar with the transect ropes used by the divers. The divers would put their gear on during the transect line deployment, swim down the first buoy, across the transect and up the last buoy to be retrieved by the boat. The operations became very smooth.

“They [the fishermen] know exactly what to do and where to go with the transects—it’s like clockwork,” said Cleaver.

Once the divers were on the bottom, the swimming required certain skills. “Your goal is always to go against the current,” said Jekielek, so that if the divers kick up any silt when on mud bottom, it always goes behind the divers so they can get a clear view of the scallops on the bottom. The scallops could be hard to find on the dark bottom. Sometimes they were covered in furry algae, barnacles, or seaweed.

“They sense you coming and close right up and flume sediment up around them,” observed Jekielek, “and the little guys are hard to see even though your face is only 6 or 10 inches off the bottom. Some are only an inch in size.”

A key to the success of these dive operations was the Cleaver-Jekielek team. Both divers worked at Hurricane Island Foundation for most of the project. Jekielek is the Program Director and Cleaver was the Director of Science and Research from 2014-2018. 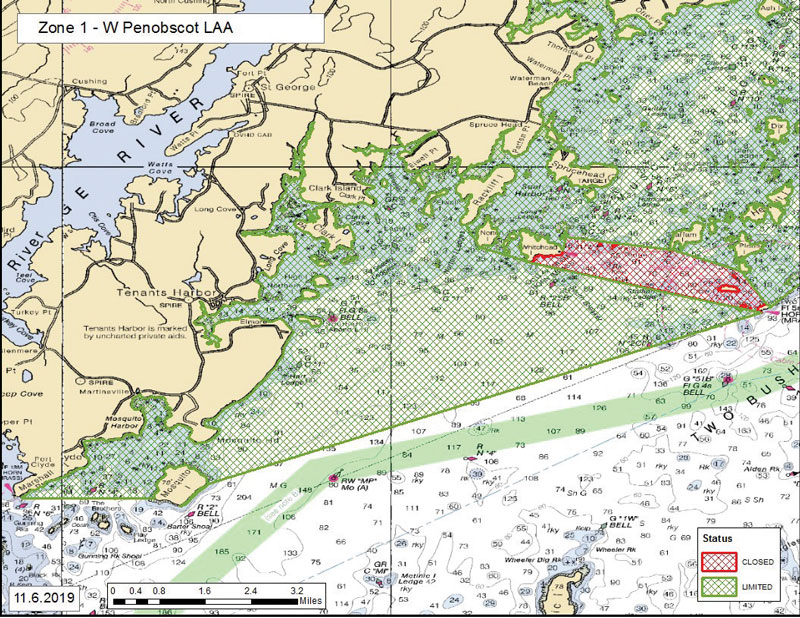 The area in Muscle Ridge closed to scalloping is marked in red on this Dept. of Marine Resources chart of scalloping areas in Zone 1.

But the scuba teams could only safely dive to depths of 60 or 70 feet, and much of the area in the study was deeper. That’s when the group contacted Dr.  Kevin Stokesbury’s Lab at University of Massachusetts Dartmouth. The Stokesbury Lab deploys giant camera pyramids in offshore scallop grounds that are hundreds of feet deep. Like mini-theaters equipped with still cameras and bright lights, the larger pyramids are designed to be deployed off large ships and to handle big ocean swells. However, the team had a smaller prototype that was perfect for the midcoast scallop project.

The last piece of the project was the deployment of spat bags both inside and outside of the scallop closure. These are mesh sacks designed to attract scallop larvae that drift in the current, looking for the right place to settle and transform into juveniles. The small larvae swim in through the mesh and attach. As they grow, they become too large to escape. Usually bags are deployed for 6-9 months and then collected in the early summer, when the juveniles are big enough to see and easier to count.

Even projects that mostly rely on volunteers require funding—boat time and fuel, SCUBA tank fills, safety checks and other basic needs. Cleaver was never sure from year to year whether there was enough money for the next season. Eventually, funding came from Patagonia, the Davis Conservation Foundation, and Maine Community Foundation.

One aspect of the project that required outside expertise and a lot of dollars was population genetics. Tissue samples were collected from scallops by divers and stored in Cleaver’s freezer while waiting to be analyzed. Brothers Tad and Dan Miller, two of the volunteer fishermen, were particularly interested in this part of the project, because they wanted to know how scallop populations along the Maine coast are connected.

Initial DNA analysis suggested that adult scallops in the area came from all over the coast; not from one place in particular. That might have been a result of yearly variations in ocean currents, which affect where the scallop larvae come from, and where they go. The collection of data from the closure officially ended in 2017, but analysis of the data, and work on genetics continue, including a proposal to combine genetic information with oceanographic models to better predict the source of the larvae from year to year. 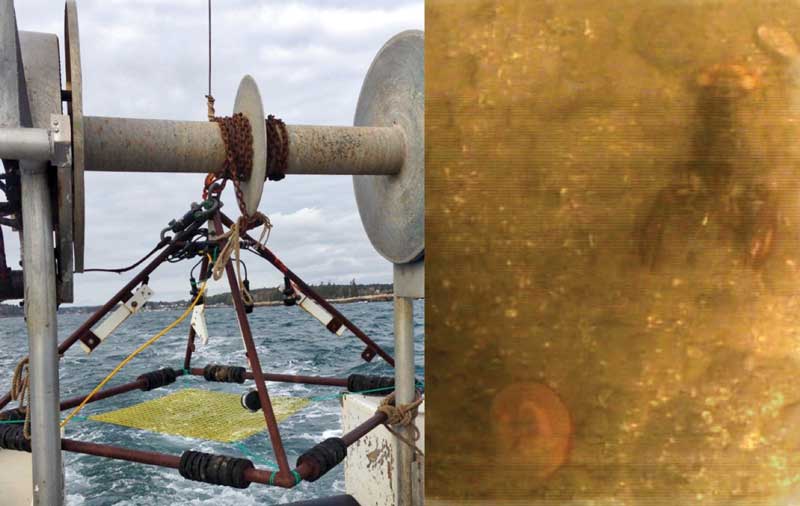 Shown on the left is the special camera pyramid used in areas that were too deep for the divers. On the right is an image taken by the camera. Note the lobster in the upper right. Photo by David Bethoney

One of the most exciting finds was that a clear pulse of smaller scallops were entering the population—a recruitment event. This could mean Muscle Ridge regularly receives new generations of sea scallops, acting as a nursery. The older sea scallops, as time went on, also grew bigger and were likely able to produce more larvae, acting as a source of scallop babies. The camera surveys revealed that the closure did indeed support an increase in the amount of sea scallops over time—answering one of the fishermen’s major initial questions.

DMR has chosen to continue the closure of the Lower Muscle Ridge Area, listing it as a potential source of scallop larvae and functioning as a nursery. This gives hope that in the waters of Muscle Ridge, like in other small closure studies around the world, scallops just need more time to recover to the numbers of their heyday. 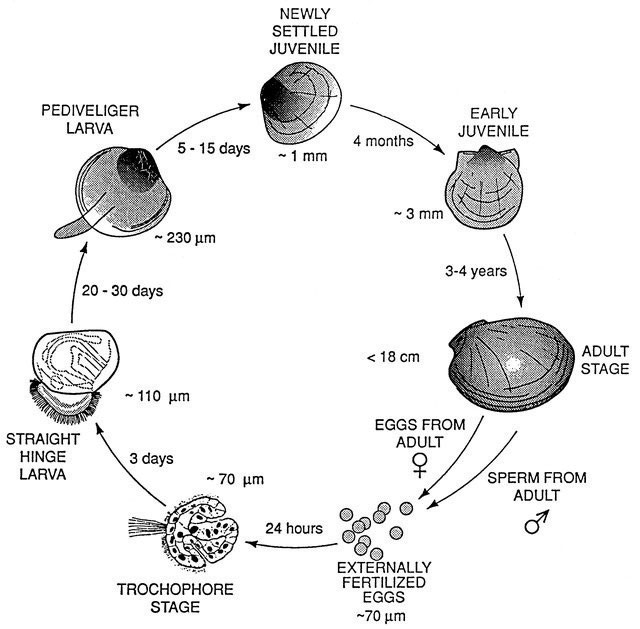 The lifecycle of an Atlantic sea scallop (Placopecten magellanicus) starts with males and females releasing sperm and eggs into the water column where they will meet to create the larval or “baby” form of sea scallops. This larval stage can last up to 40 days in the water column, a long time to be at sea. Larvae go through three stages (trocophore, veliger, pediveliger) before settling on the bottom (or a spat bag) where they metamorphose into a juvenile. After about three or four years, sea scallops are able to produce gonads that release sperm and egg and repeat the lifecycle. Diagram courtesy Dept. of Marine Resources

Beyond the scientific findings, the relationships forged between partners may be the most important result of the Midcoast Maine Collaborative Scallop Project. When “you gain that relationship [with scientists], that’s invaluable,” Tad Miller said. “That’s the type of relationships that can talk shop. They comprehend what you’re saying and vice versa.”

Tad Miller argued that collaborative research with scientists should be part of a fisherman apprenticeship program. His brother, Dan Miller, agreed. “If you only gave one day [to the research project], a few hours, it’d be worth it for the industry.” Applying the combined knowledge of fishermen and scientists is the only way to improve the scallop industry, said Tad Miller. “Once you understand [how a system works], it changes how you look at it.”

Skylar Bayer is a marine biologist, writer, producer, and storyteller based in midcoast Maine.  She lives with her husband, two rescue dogs, and a grumpy cat.