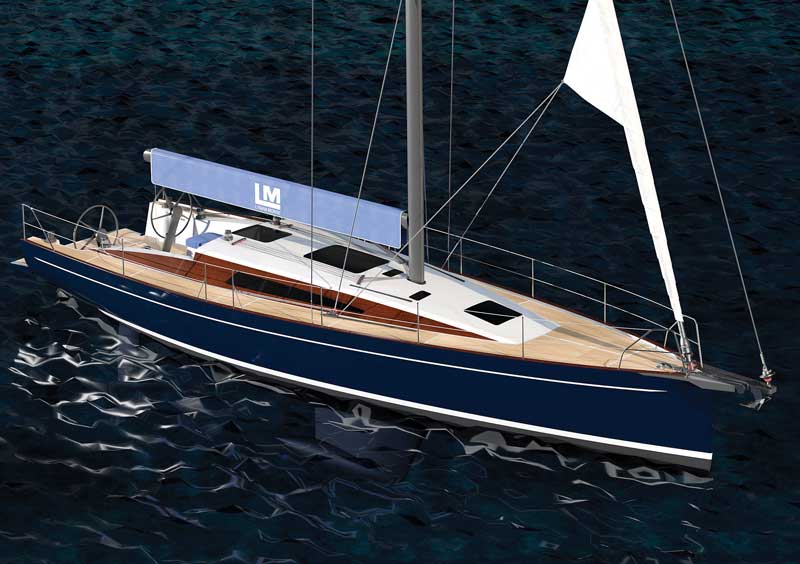 The Lyman-Morse 46 is designed to be cutting-edge yet relatively affordable, and easy to sail in order to appeal to people who just want to get off the dock quickly and go boating. Image courtesy Lyman-Morse

Just prior to my meeting with boatbuilder Cabot Lyman, his cell phone had texted him that my cell phone was eighteen minutes away and bound in his direction. I’d done nothing to cause this, and neither of us had a clue as to how it had happened. This led to banter about telecommunications, Space-X, efficient batteries, laser-guided tunnel boring machines, and computer enhanced manufacturing for boats. Lyman holds a fascination for cutting-edge technology, which bears directly on the subject of this article, the Lyman-Morse 46.

The design is Cabot Lyman’s version of a cutting-edge yet simple, relatively affordable, and easy-to-sail boat. He hopes it will appeal to busy people who want a contemporary boat with the soul of wood, but don’t want to be bound by tradition. The boat was designed by New Zealand’s Kevin Dibley.

In a phone interview the previous day, Lyman had described the new boat as plumb-ended fore and aft, so I’d arrived at the meeting at Lyman-Morse’s Thomaston, Maine, facility skeptical as to the aesthetics. Dibley has been creating trend-setting sailboats for decades, and his specialty is so-called “box rule” racers. This handicap strongly encourages a waterline that is close to length-overall. “Box rule” boats tend to look, well...  boxy. Dibley designs attempt stylishness in the deck plans, as an offset to a chunky hull. Others can judge his success with previous boats, but I have no hesitation in proclaiming that this new boat features his most beautiful deck profile ever. 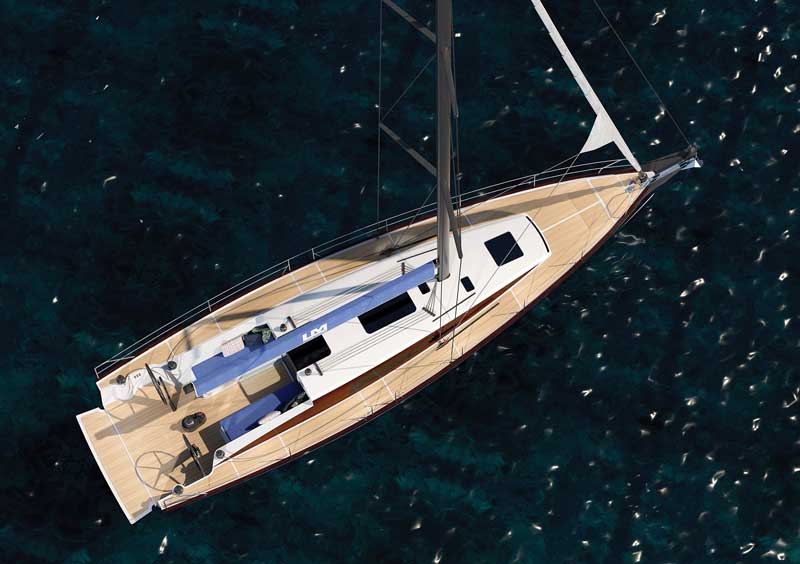 Dibley has made the LM46 look like what it is, a modern wooden boat. Lyman likely influenced this outcome since he is of the opinion that people hanker for boats with soul, and that nothing imparts this better than wood. This must have represented an intriguing challenge for Dibley who is known almost exclusively for specifying cored, composite structures.

Lyman-Morse Boatbuilding has built custom yachts in fiberglass and lightweight, advanced composites, and Lyman has sailed most of them on the high seas. But there’s just something about a wooden boat. Along with many commercial fishermen, he believes that a wooden hull feels better. It seems sturdier and safer and is easier on the body and the senses. The LM46 is intended as a semi-custom design, and for that it’s as easy to generate a new shape with wood as by other means.

Lyman argues that contemporary cruising and yachting boats should be less complicated and sustainable in order to appeal to younger mariners—currently a relatively rare group. Modern life for them doesn’t afford the luxury of ample leisure time nor does it favor wasteful expense. The LM46 displays minimum complexity, quick turnkey takeoffs, less pretension, and less machinery, resulting in decreased costs for operation and maintenance.

Lyman’s vision for the LM46 is for the owner to get aboard and get sailing within five minutes, either to sail or power at 10 knots, and to minimize or eliminate systems. He sees no need for more than 10 circuit breakers in the electrical panel, no generators, air conditioners, watermakers, or bow thrusters. And unless you’re out to impress people, who really needs labor-intensive joiner work or cabinetry? Keeping your kit in plain sight places everything readily at hand. Fine tropical-wood work is unnecessary, adds mightily to the weight and cost and is less sustainable than woods sourced from North America. There will be just one door—the one for the single head. 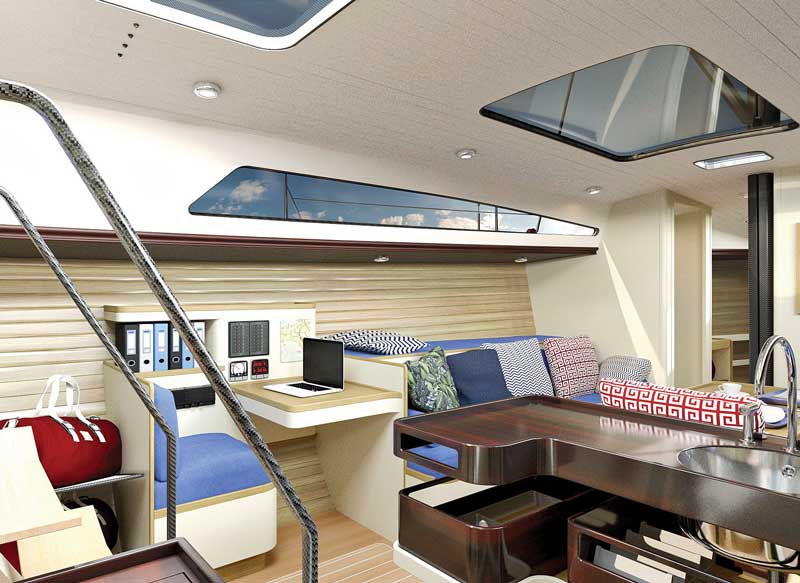 The interior of the LM46 will be simple and show as much wood as possible. Image courtesy Lyman-Morse

The interior design is lovely. Lyman contends that the inner layer of a beautiful wooden hull should show as much wood as possible. The varnished “ceiling” shown in renderings is structural, but also gorgeous. The LM46 will be constructed on a semi-custom basis—the wood used in the first boat likely will be Douglas fir, Lyman said. Donna Maree of New Zealand was responsible for the computer renderings of the boat. Her drawings show zippered sea-bags for the ship’s crew—Lyman would like to offer duffle bags to go with the boat. Her tastes feature a spot-on selection of fabrics and colors. Her stylish drawing of the boat’s exterior and abstract treatment of the sea is a masterpiece.

The LM46 is designed to be easy to sail. Lyman has avoided the ubiquitous, portly stow-boom, in favor of lazyjacks and container-cloths. There is just one electric winch that will manage the three slabs of reefing plus the main halyard. The sail plan is simple, sensible, and proven. The fractional rig shows swept spreaders and a seaworthy passage between the wide-stance uppers and the inboard lowers. In consideration of affordability, the spars are aluminum not carbon. Running backstays are available, but owing to the swept spreaders they will likely only be used to oppose a storm jib on a deployable inner forestay. This will be a great rig for an offshore boat.

The bowsprit will benefit from the designer having a good “eye,” but also from Lyman-Morse’s metalwork facility. I predict that it will look nicer than most. That sprit will anchor a “code-zero” headsail for reaching, along with a humongous asymmetrical spinnaker.

The boat’s all-up displacement of under 23,000 pounds loaded for sea, with all that sail area, matches Lyman’s hopes for 10 knot sailing speeds. This may actually turn out to be a conservative estimate, because computations of speed polars always ignore the fact that a light, flat hull like this will find a wave and surf it for extended rides. The LM46 will have a spade rudder and wing bulb modern keel, and draw less than 7 feet.

Lyman said the boat will be competitive in offshore racing, but also perfect for weekend cruises and daysails.

Two things stand out for me as I look down onto the deck plan. First, Dibley has ditched the trendy fine-bowed wedge and added a little bulge abaft the bow. This will keep the boat dryer, keep the bow from burying, and it provides welcome volume inside, around the forward berth. And way aft, he’s eliminated having just a swaged taut wire between the helmsperson and the deep blue sea. A nifty swimming platform can be hinged down and then raised for sailing, so that admirers can read the name on a real transom, and so that the crew can be, and feel, safer.

I left the Lyman-Morse boatyard bursting with excitement. Isn’t it time that sailing, at one time a simple pleasure, returned to its roots? Boats do not need to be complex, heavy, expensive showpieces. They can perform better, and be more user-friendly and affordable, when pared down to basics. The LM46 is both a trendsetter and a throwback to more sensible times. It remains to be seen if it can be built and sold at less than half the price of similar vessels. Lyman’s goal is a price tag under $950,000. He’s not sure when the first one will be built—right now he’s looking for the first couple of people to step up and place an order.

Ninety percent of the success of a boat is a combination of the wisdom of its concepts and the excellence of its design. I don’t believe I’ve seen a better conceived, more revolutionary, or more stylishly configured sailboat design in the last 20 years. It is a combination of efficiency, simplicity, forward-thinking, and advanced industrial design. 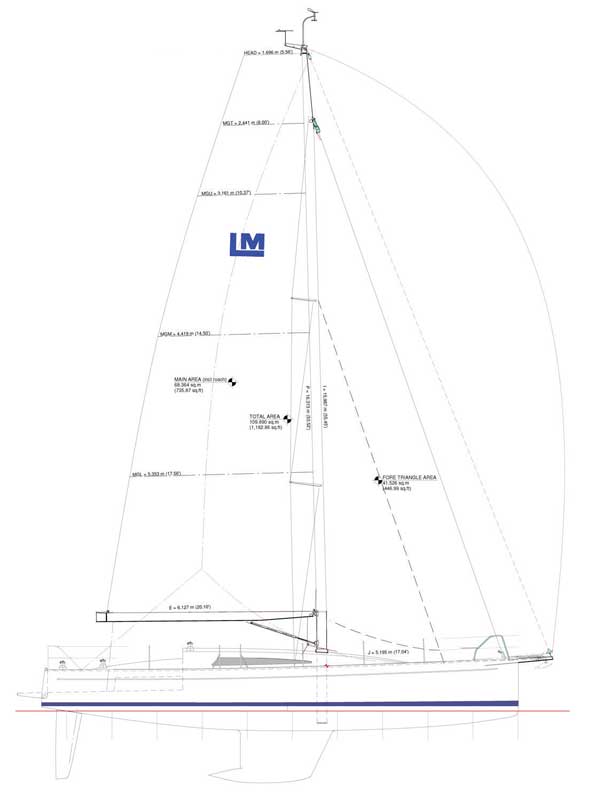 A Letter from Matinicus - Edge of What?