A painter in alignment with nature 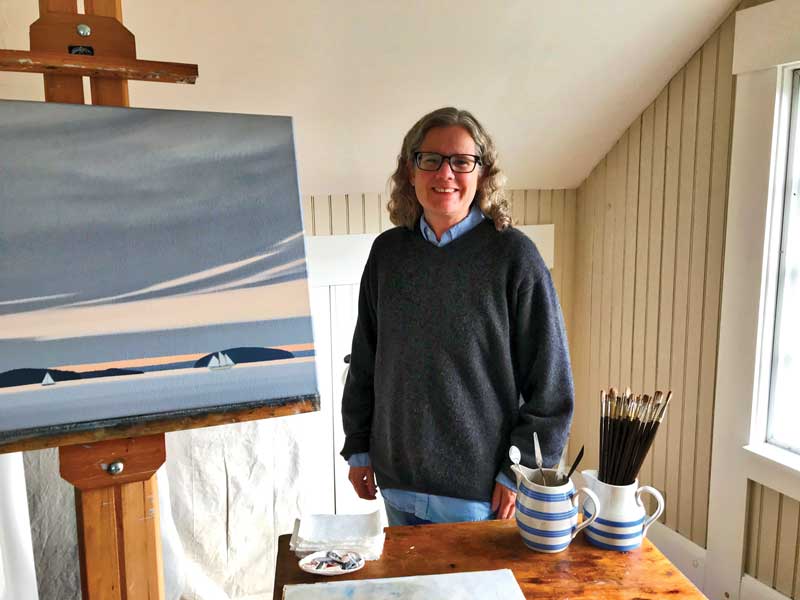 Sarah Faragher in her studio in Stockton Springs. Photo by Ryan King

On a sultry late September day, Sarah Faragher prepared her palette for an outing in the neighborhood. She squeezed paint from several tubes onto a sheet of white wax paper and retrieved a small prepared panel from a cubbyhole in her sunlit studio on the top floor of her home in Stockton Springs. Supplies packed neatly in a basket, she set off across the road, through Mt. Prospect Cemetery, and down a woodland road to the blueberry bush-covered flank of Fletcher Hill.

Eventually she found a rock and sat down to take in the view, a panorama that included capes Jellison and Rosier, Sears Island, Castine, Islesboro, Belfast, and Northport. This view has been inspirational for the artist, whose stunning plein air canvases, vistas both intimate and expansive, speak to her love of the outside world. Faragher has made a name for herself through images of natural forms—islands and mountains, lakes and woods, clouds and expanses of perfect sky—rendered in a clean, stylized manner that captures the essential elements of the particular motif. Her palette is consistent, 12 colors (fewer on an overcast day) plus white, with Payne’s grey and burnt Sienna her go-to hues. 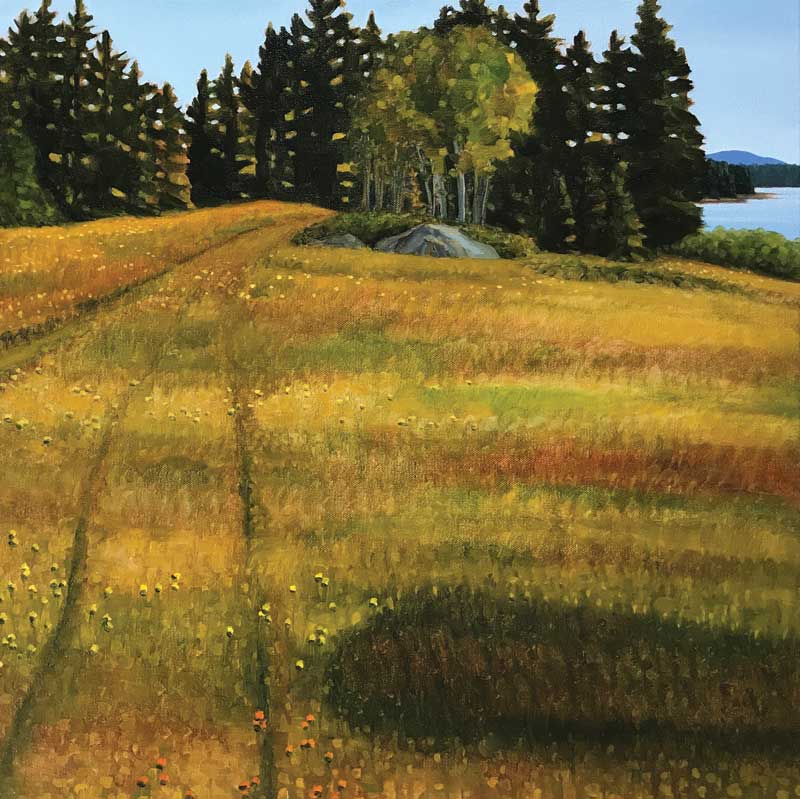 From this perch above the northern tip of Penobscot Bay, on a clear day you can glimpse Great Spruce Head Island. Faragher attended her first end-of-June “Art Week” there in 2005. Hosted by painter Anina Porter Fuller in the former home of her uncle, artist Fairfield Porter, the annual gathering of a dozen or so artists and writers offers an opportunity to focus on work in a setting to take one’s breath away.

Early stays on Great Spruce Head determined Faragher’s commitment to paint. Having taken up the brush again after a substantial hiatus, she rediscovered her love of painting in her hands, her eyes, and, she said, her very being. She also shifted from still lifes and interiors to the landscape, glad to be outdoors after spending years running a bookshop in Bangor.

“The almanac of the year sets my schedule,” she said. “Being out in the middle of everything as it unfolds helps reset my worry-clock to none, for long moments.” 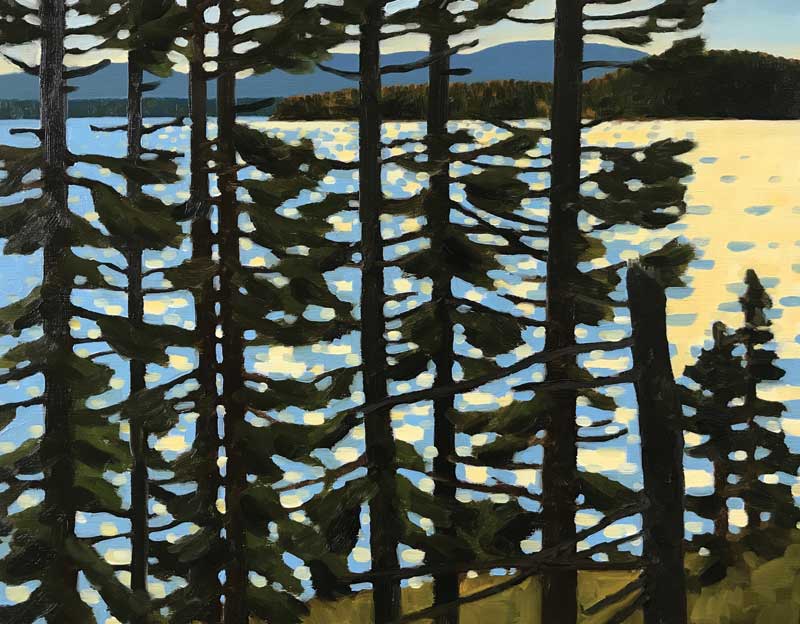 On an early visit to Great Spruce Head, Faragher discovered nearby Bear Island, famed in part for being the former home of geodesic dome inventor Buckminster Fuller. She fell in love with the once sheep-inhabited isle and arranged to rent a bungalow, “Birch Lodge,” which became the center of her painting life universe.

Faragher has painted several hundred canvases of the island and is assembling a book that will conflate over a decade’s worth of diaries into an illustrated narrative. While writing this memoir, she has come to realize that the work she’s done there is “like a map, showing me my own development as a painter, over an entire decade.”

Faragher also has close art ties to Islesboro where painter Brita Holmquist organizes a week-long retreat every summer at her family’s cottage, Long Ledge. That retreat, which began after Holmquist attended Art Week on Great Spruce Head, has been going for more than a decade now. “It has been invaluable to me, as a painter, to have this time with other working artists,” said Faragher. 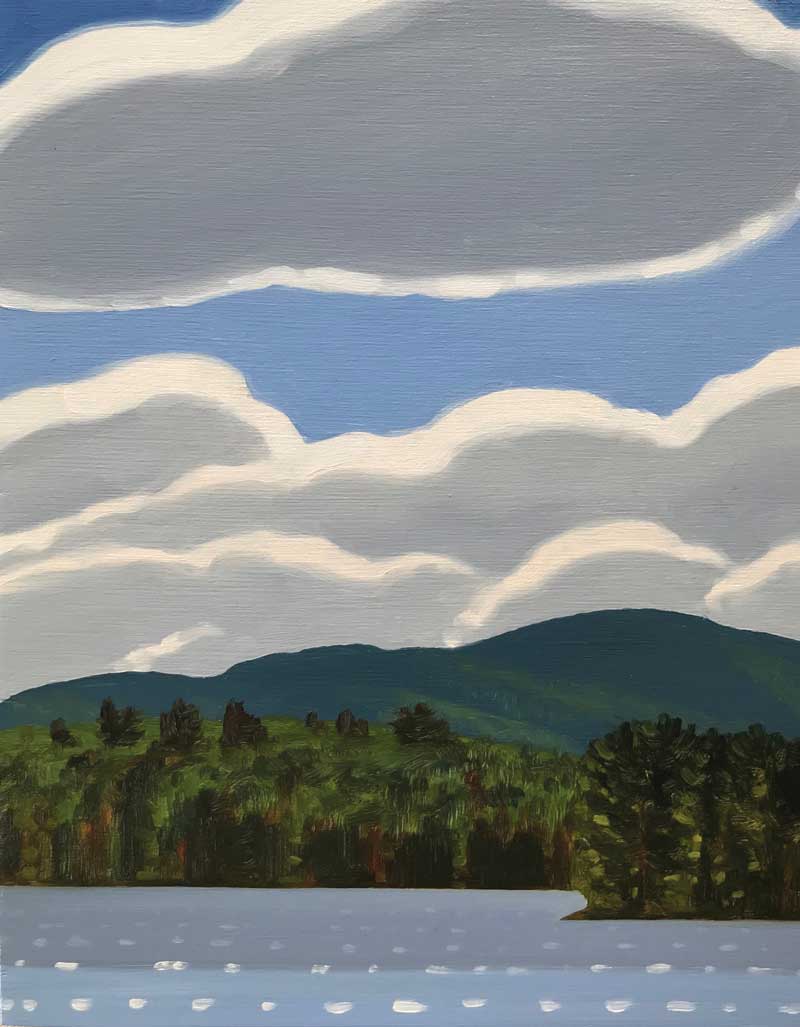 Last year Faragher expanded her territory after taking a “Slow Art” workshop with painter Alan Bray at the new Monson Arts program. Bray encouraged her to work more from memory; that bit of advice has freed her to take more liberties in the way she interprets the world, making up more. Her clouds, for example, are wondrously imagined.

Since the stay in Monson, Faragher has started a series she’s calling “The Lake District,” with views of Hebron Lake, Lake Onawa, and other sites in greater Monson. She has gone beyond simply visiting the area to paint: she and her husband, Ryan King, who coaches the cross-country teams at Maine Maritime Academy, have “adopted” a stretch of the Appalachian Trail nearby.

In the past couple of years, Faragher has also added a series of studies of architectural details of chapels, churches, and other buildings encountered in her Maine wanderings—“little reminders of the sacred in the landscape,” she calls them. She’ll stop and paint a detail of a gable or steeple, some angular corner of the structure. She loves their names: St. Brendan the Navigator in Deer Isle, All Souls by the Sea at Petit Manan Point, St. Mary Star of the Sea in Stonington. She’s not wholly sure yet why she’s painting them. “A lot of my painting is intuition-based,” she explained, “and I go with that, and am still learning to trust the process.” 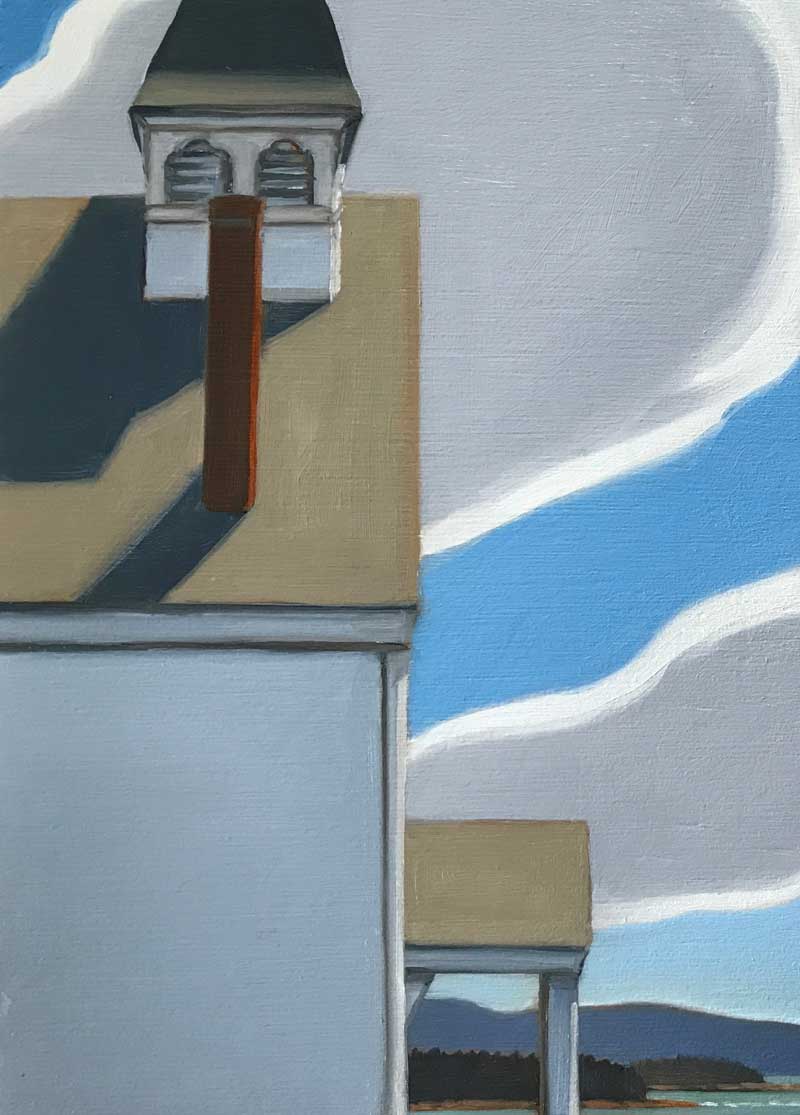 Faragher was born in Bar Harbor in 1967. Her parents, Don Faragher and Anne Perry, had met at the Pennsylvania Academy of Fine Arts in Philadelphia and traveled downeast after their teachers insisted they go to Maine to paint. They bought some land, built a house, and had three kids “really quickly.” Faragher took after them early on: a photo shows her at three years of age set up in her Bar Harbor backyard with easel, a cup of water, and a brush, painting away. Before her father died in 2015, he told her that she had been a maker from the beginning.

After her parents divorced, Faragher’s mother met her stepfather, Thomas Godfrey, and they moved to Addison to homestead. They lived in a house with no plumbing, on “this little organic-like hippy farm because my parents were back-to-the-landers,” Faragher said.

Faragher started out at Narraguagus High School and finished at Maranacook after her parents moved down state. From there she went to Colby College where she studied with Gina Werfel and Abbott Meader, who taught her how to paint. In her junior year she sat in on classes at the University of Maine with Susan Gross and Michael Lewis, who focused on drawing. After graduating from Colby, she returned to Orono to work in the university bookstore while earning her Master of Art in Liberal Studies degree.

Faragher became a full-time painter in 2008, after managing her bookstore, Sarah’s Books, in Bangor for many years (she still rents a booth in the Bangor Antique Marketplace & Café on Main Street). She is a voracious reader as evidenced by her blog, “Sarah’s Books—Used & Rare.” In a post in October she offered commentary on a raft of new titles about the New York School of art and poetry. 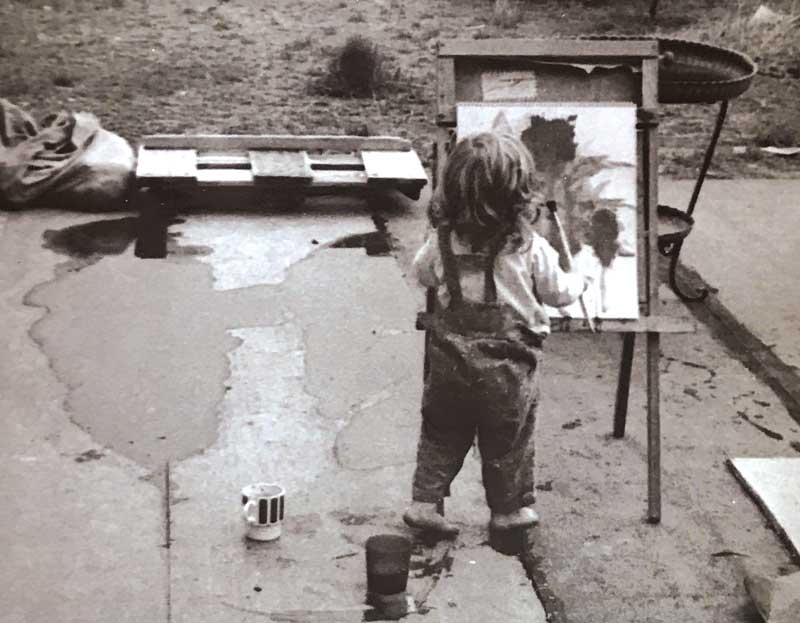 The artist, age three, painting in the backyard of her family’s home on Eden Street in Bar Harbor. Photo from family collection of the artist

Faragher is part of a lively community of artists, as witness the art in her home in Stockton Springs. Work by the likes of Scott Moore, Siri Beckman, Liddy Hubbell, Tom Curry, and David Vickery hangs in every room of the house, which is one of a group built by the ship-building Hichborn family in the 1850s. An Italianate house down the street is now The Hichborn, a farm-to-table restaurant.

Faragher has been averaging about 100 paintings a year. She likes all times of day: morning light, hot light from dead overhead at noon, evening light. And she is a four-season painter, with a special love of the spring when she can more easily immerse herself in nature. In winter, she notes, “you really have to hunt for the color,” but she “loves the bleak” and the ability to see deeper into the landscape.

Back on Fletcher Hill, as she prepared to paint, the crickets were in full chorus and birds raised a ruckus in the trees. Gazing out at Penobscot Bay, Faragher waxed philosophical in describing her connection to the land—and the importance of aligning oneself with nature. She revels in being outside. “Painting is my life’s work,” she said, and I believe her.

Faragher is represented by the Landing Gallery in Rockland where she will be having a solo show, “At Sea: New Paintings of the Maine Coast” from late May through the end of June 2020. She was one of 34 artists featured in “Framing Maine: Artists’ Perspectives on Place” at the Lord Hall Gallery at the University of Maine, Orono, this past fall. See more of her work at sarahfaragher.com