Sabre’s 58 Salon Express fills a gap in the line-up between the Sabre 48 and the Sabre 66 Dirigo.

Since 1970, Sabre has been turning out yachts that have come to define the Maine boatbuilding tradition. Ranging from 38 to 66 feet in length, Sabre powerboats can be found around the globe, earning a fierce loyalty from customers who steadily move up from one Sabre to the next. In 2017, the company’s venerable 54-footer was retired. The new Sabre 58 Salon Express was introduced this year to strategically fill the line-up between the Sabre 48 and the company’s flagship Sabre 66 Dirigo.

“One of our most successful models has been the Sabre 48; we’ve now built and sold more than 150 of them,” said Bentley Collins, vice president of sales and marketing. “That means we have 150 customers out there wondering what their next boat might be. We decided the ideal would be 58 feet—a step up from the 48, but not as big as the 66. The response has been tremendous. We’ve sold a dozen of the 58s, all to Sabre 48 owners.”

The Sabre 45, 58, and 66 feature new styling. “It’s quite revolutionary with lots and lots of exterior windows, raised bulwarks, and a windshield that is a little farther forward, which makes the salon larger,” Collins said. “Previously, we used aluminum-framed windows separated by pillars. The new styling features automotive-style glazed windows bonded to the house structure. The windshield and windows appear as one long, wrap-around window starting at the back of the boat, continuing around the front, and back down the other side of the boat.”

One of the secrets to Sabre’s long-term success is a commitment to adapting new technology as its yachts evolve. It’s something the company refers to as “nautically sensible” features, necessary to ensure that owner-operators are comfortable and confident with their vessels. For example, the new 58 is fitted with twin Volvo-Penta IPS950 pod drives coupled with Volvo’s Interceptor trim tab system, 24v electric shift transmissions, and Nibral P-series duo-props.

The steerable pods combine slow-speed maneuverability with excellent high-speed handling. By working in undisturbed water, the forward-facing dual props are exceptionally efficient. The 58 delivers with a full-on Volvo Penta Electronic Vessel Control system. The system fully integrates the engines, chart plotters, joystick, autopilot, dynamic positioning system, and e-Key, and includes built-in redundancy to ensure there is always a backup system should the need arise. The boat will cruise in the mid-twenties and top out around thirty knots. If the owner chooses to slow-cruise in the teens, range will be 500-600 miles. At fast cruise, a healthy 300-mile range can be expected. 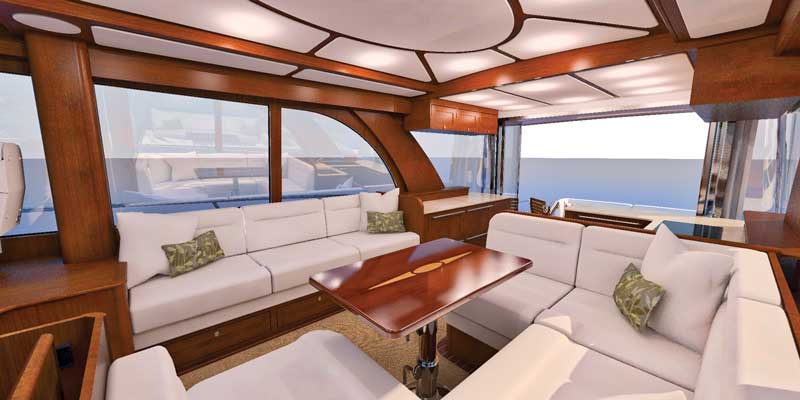 The main door to the yacht’s bridge deck opens from port to starboard, bathing the interior living spaces in natural light. The U-shaped galley is located at the aft end of the pilothouse, making sure that the chef du jour can take part in the festivities. “It’s the first time we’ve done an aft galley,” Collins explained. “It really opens up the social spaces between the salon and cockpit.”

Owner’s and guest accommodations are below decks in three cabins. The 58’s master stateroom spans the full beam of the yacht, and offers a walk-around king berth, a roomy head and shower, and tons of personal storage space. The VIP suite is located at the bow, offering a comfortable walk-around centerline berth and private head and shower. The guest cabin features two single berths which can be pulled together to create a queen bed. This cabin also has a private head and shower.

Hull No. 1 was due to be launched in December 2019 and will debut at the Miami International Boat Show in February 2020. Faced with the task of building eight 58s per year, the company will build the boats at its Raymond and Rockland, Maine facilities. “We’ll be running two assembly lines full time,” Collins said.