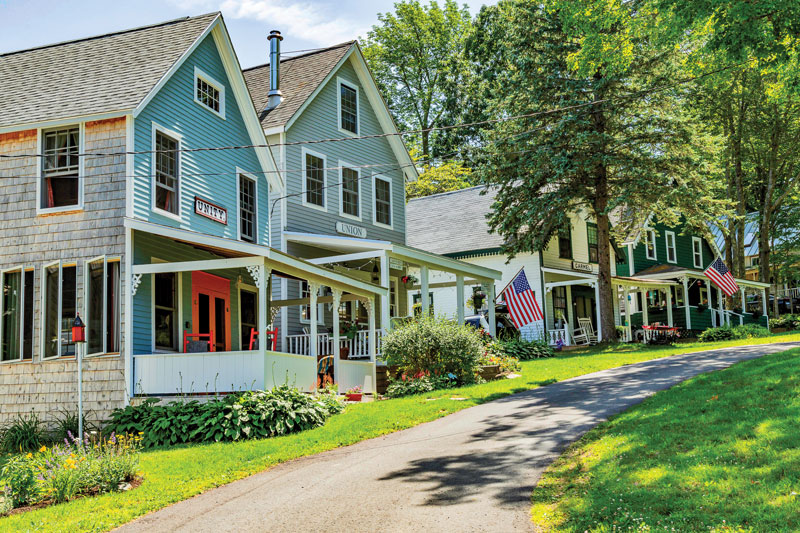 Bayside’s present-day scene of narrow streets and picturesque camps clearly echoes this early view of “Broadway” on the west side of Bayside (below) Historic photo courtesy Penobscot Marine Museum. 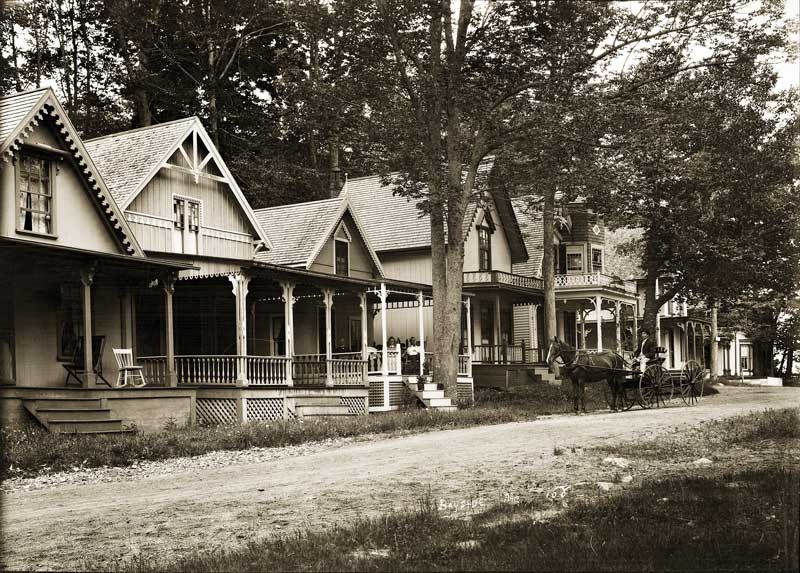 Sharp-eyed boaters on the water off the west coast of Penobscot Bay’s Islesboro island have several advantages over mainland motorists on nearby U.S. Highway 1. Aside from the sheer pleasure of being on the water, boaters can enjoy views of Bayside and Temple Heights, two time-capsule communities along the shores of the tiny town of Northport (population 1,520).

Hidden from landlubbers, these settlements of Victorian cottages were founded in a surprisingly similar fashion in the mid- to late-1800s, when worshippers by the thousands came by steamship for a week of outdoor prayer and religious instruction at what were then campgrounds, one run by Methodists and the other by Spiritualists.

Steamships like the City of Bangor (shown here at Bayside) made frequent stops at both Bayside and Temple Heights with visitors looking for a religious experience or vacationers, who eventually took over most of the homes in the two communities. Historic photo courtesy Penobscot Marine Museum

Eventually, the Methodists left Bayside. Outdoor camp meetings ceased in both villages, although the Spiritualists still host events during the summer. The cottages now sit, stuck in time and loaded with postcard-ready charm. Most of the passing generations of families and retirees who own these cottages no longer attend worship services on site, but they do hold sacred the peace and quiet and the safety of having few cars on the narrow roads. These secular blessings are an incentive to keep their location a bit hush-hush.

Bayside is organized around a large village green, known as Ruggles Park or The Common, bounded by rows of Victorian cottages, a dock, boats bobbing at moorings, and the Bayside Inn (now condos) at the far end of the common. Although today most homeowners use their cottages during the summer, longtime Bayside realtor Blair Einstein of the Blair Agency said about a third of the residents there today are year-rounders.

In 1849, the Eastern Maine Methodist Episcopal Church Conference purchased 30 acres for $200, for the express purpose of holding outdoor religious camp meetings, which were in vogue then. The site’s original name was the Northport Wesleyan Grove Camp Meeting Grounds. Today, the 300 homes in what is now called Bayside include 158 buildings that have been added to the National Register of Historic Places. The registry lists the original cottages, including some “society cottages,” which bear the names of the towns of the owners, as well as newer cottages, some of which were built from kits bought from catalogs and some designed by architects.

Names of the original builders have mostly been lost. Many of the first simple, camp-like cottages were erected on the platform or footprint of the original, closely spaced tents. The style of the Bayside cottages has been variously described as Carpenter Gothic, Gothic Revival, Simple Victorian, Queen Anne, or Bungalow. Anyone who has visited the old Wesleyan Grove in Oak Bluffs on Martha’s Vineyard will see a similarity in the style and placement of cottages.

In the 1800s, local newspapers covered events at both camps, reporting on vast numbers of people crowding the decks of steamships from Belfast, Rockland, or elsewhere, that docked at wharves in both settlements. Along with the visitors looking for a religious experience, came vacationers, who eventually took over the majority of the homes in both settlements. The final camp meeting was held in Bayside in 1932, and over the next few years, the Methodist church withdrew from its association with the area and its real estate. 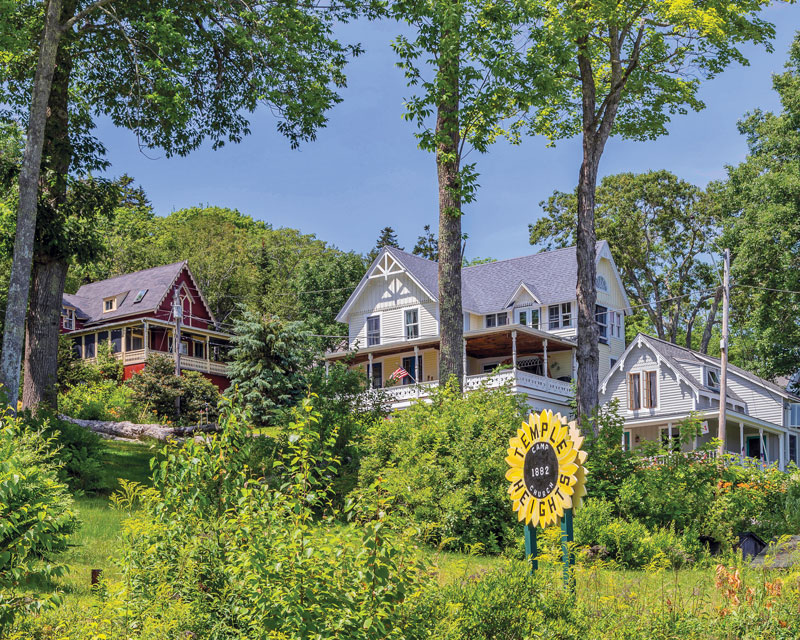 Cottages at Temple Heights, as seen from Shore Road.

Temple Heights, just to the south of Bayside, is more loosely arranged than its neighboring community. The property was bought to be developed as a Spiritualist campground in 1882. Early camp meetings were held in a grove by the shore, with the remaining property being used as a tent ground and building lots for cottages. Today, behind the cottages which line the shore, boaters can see the roof of the Spiritualists’ temple and the Nickawa Lodge, which was built in 1927. The temple and lodge are still used today in the summer by the non-profit Temple Heights Spiritual Camp for visitors who are exploring the ideas and practices of Spiritualism. A few church leaders live close to the church and lodge, but most homeowners are not affiliated with the church.

Spiritualism in the briefest terms includes the belief that life does not end with death and that the spirits of the departed are still with us and can be contacted. The 100 or so Victorian cottages here are often the mirror image of those in Bayside, both along the shoreline and scattered on the hillside and in the woods along Shore Road, although many have been enlarged over the years.

The community of Bayside is an independent village corporation—property owners technically own shares. It has its own government, budget, utilities, small museum, yacht club, library with a children’s story hour, nine-hole golf club, several parks, and many resident committees and activities, including an old-fashioned Fourth of July celebration. Temple Heights is much lower key and is simply called “a populated place” within the town of Northport. 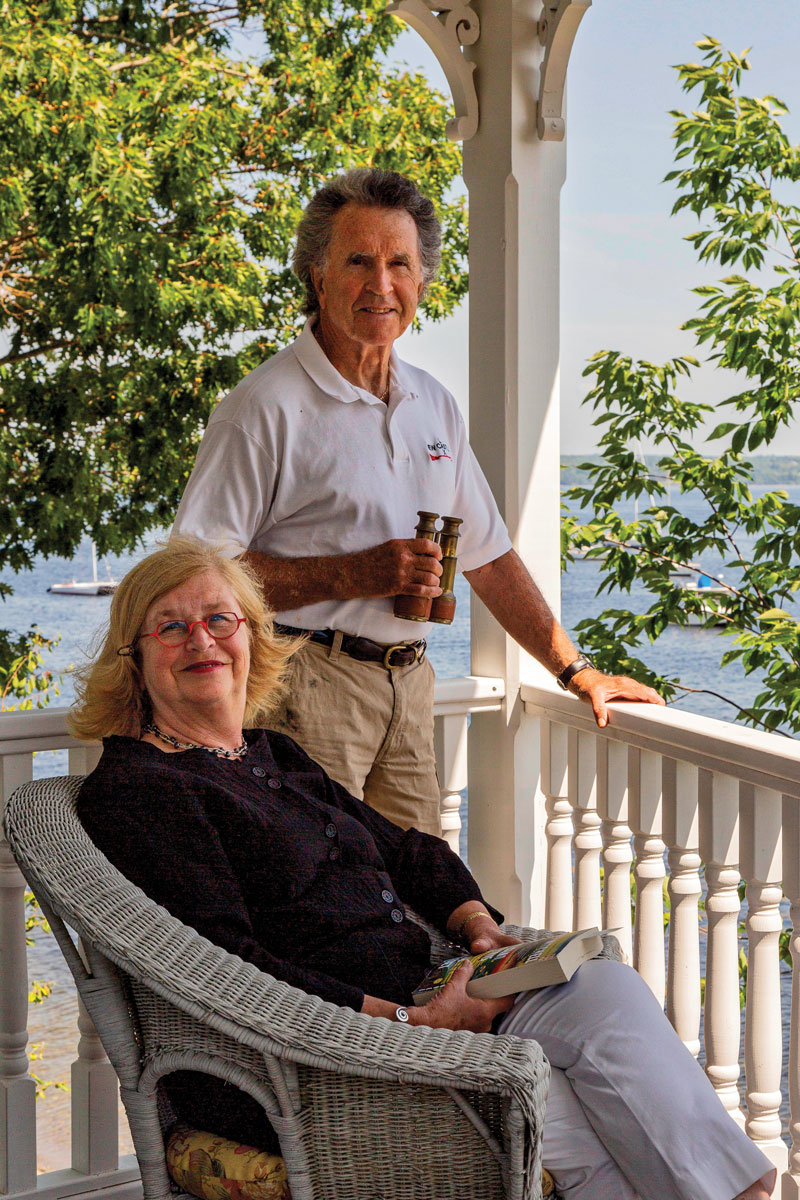 Perhaps the first Bayside cottage a boater would see might be the one belonging to longtime summer residents, Janet and Thomas Duggan, who live in Chappaqua, New York, during the winter months. Their vacation home for the past 36 years fronts the bay and the commons. The first “soldier” in the uphill march of iconic Park Row cottages, its distinctive turret gives it a certain pride of place. Its water views are almost as good as being out on the couple’s 40-foot, ocean-going, Hank Hinkley-custom-built sloop, Song.

The Duggans are retired; Tom from his job as chief legal officer of Oppenheimer Capital in New York City, and Janet as the owner of a commercial real estate project management consultancy in New York City and Chappaqua.

Early in their marriage they vacationed for several years at the Chance Along Inn in Belfast, Maine. Tom, who was taking sailing lessons while in Maine, could see the masts of sailboats down the bay in some kind of local boat harbor. The siren song of those masts led them to drive down one little road after another until they discovered Bayside. They rented two different homes over the next few summers and were enchanted by the tight-knit community with many sets of eyes on the gaggles of kids playing on the village green or learning to swim or sail off the little beach and dock. When a house came up for sale, they jumped at the chance to buy it. The original builder was Frederick S. Walls, who fought in the Civil War.

The Duggans children, Erin and Edward, are now both parents and well into high-powered careers, but when they were children, they took advantage of every activity the low-key community had to offer. Erin, in particular, became an avid sailor. 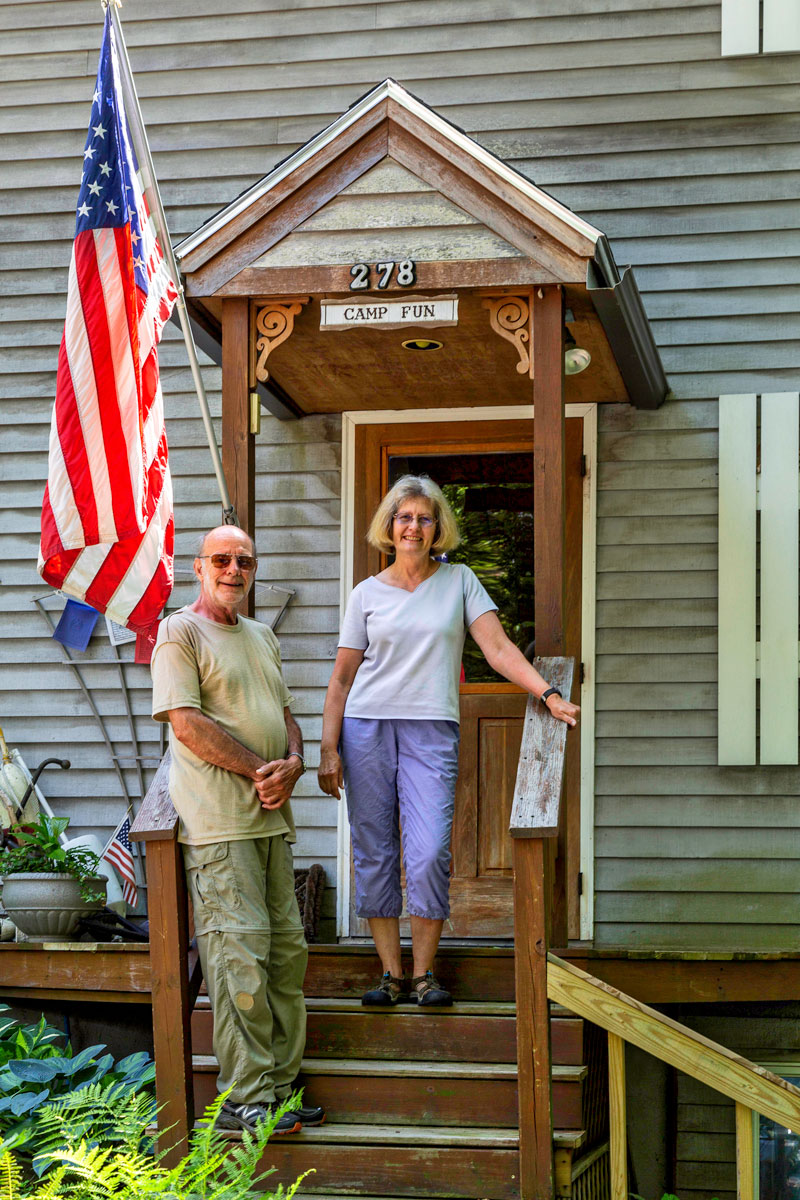 About two miles up Shore Road from Bayside sits Temple Heights and the year-round home of Robert “Bo” and his wife Kathy Parrish. She grew up in Manchester, Maine, and he, in Lewiston/Auburn, although he has lived in multiple Southern California locations and has traveled around the world. Kathy keeps a kayak at the bottom of a set of stairs to the bay on an adjoining property, and she often paddles to Islesboro in it.

In 1978, Bo took over his current home and, in 2000, another cottage, just up Shore Road, inheriting them from his aunt, Sibyl Stevens. A French teacher in Ridgewood, New Jersey, Stevens bought her first Temple Heights cottage in the mid-1960s and then bought and moved to Harmony Cottage, which Bo and Kathy now manage as a rental property. The Coreys love where they live on the north end of the tiny community and feel close to nature there in all seasons.

Like many home owners in Bayside and Temple Heights, they have done a number of renovations on their home. Most of the once bare-bones cottages now have indoor plumbing, insulation, and heat from sources other than wood. Bo also remembers that Shore Road was originally dirt, and was so dusty in the summertime that it needed to be sprinkled. Today it is nicely paved. 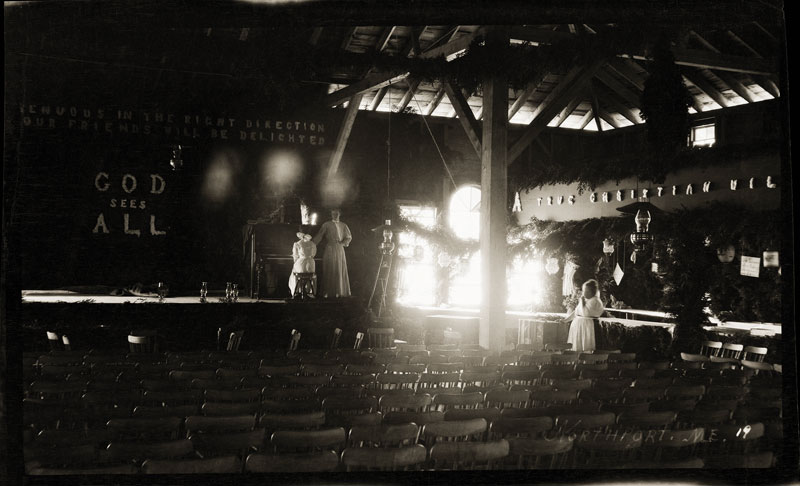 This extraordinary historical image shows the interior of the auditorium at Bayside, which was built in 1891 when the community was the site of a Methodist camp, called Wesleyan Grove. The auditorium, which could seat 1,000 people, was used for worship services and Chautauqua assemblies as well as lectures, concerts, musicals, dances, and even social gatherings. Historic photo courtesy Penobscot Marine Museum

A bit south of the Coreys’ home, along Shore Road, sits the center of the Temple Heights settlement, with the temple, where services are still held, and Nickawa Lodge, where summer campers interested in the practices of this religion can stay. Leaders of the church say that 2,000 people visit each summer, from Father’s Day to the first week of September, to attend services, to study with mediums and healers, and participate in group activities, such as spirit message circles.

On a recent July day, there was nothing scheduled and the community was quiet, as Ernest VanDenBossche, a hypnotherapist, medium, and a past president of the Temple Heights Spiritual Camp, took visitors inside the temple. The interior consists of a large meeting room with a high, vaulted ceiling of stained wood. VanDenBossche and Bonnie Lee Gibson, a psychic medium and healer, own a cottage within sight of the temple and lodge.

Near the temple but with no connection to it, longtime summer resident Everson Stinson of Orrington, Maine, and his extended family, including two grandchildren, worked and played outside their cottage. Stinson said that he’d been coming to the cottage for vacations since his grandparents bought it in 1938, when he was a baby.

Noting that his grandchildren were the fifth generation in his family to spend time at the cottage, he said he hoped it would stay in the family for many years to come.

There have been a few changes since Bayside and Temple Heights began as religious campgrounds in the 1800s; canvas tents have been replaced by wood-sided homes and the communities have mostly shed their religious affiliations. But they remain far off the beaten path, and very present in the hearts of the families who own homes there.

Ann Dodds Costello lives in Los Angeles and Owls Head. She is the author of Smart Women: The Search for America’s Historic All-Women Study Clubs.