One Ship Model at a Time

Morris has built a wide range of models. They include: the Hay Val, built for her owner; the Seatrain Texas, which was the first of 10 models built for the US Merchant Marine Academy; the Enterprise, one of the last big fishing boats in Rockland; the Barnegat Bay lightship, built for one of the vessel’s former commanders; the Gypsum Countess, built for someone who sailed on the vessel in the 1960s in the Great Lakes; the Laura B. a model of one of the Monhegan Boat Line ferries; and the Polias, a WWI concrete carrying steamer that foundered off Port Clyde only four months after her launch. The model is on display at the Marshall Point Light Museum in Port Clyde. 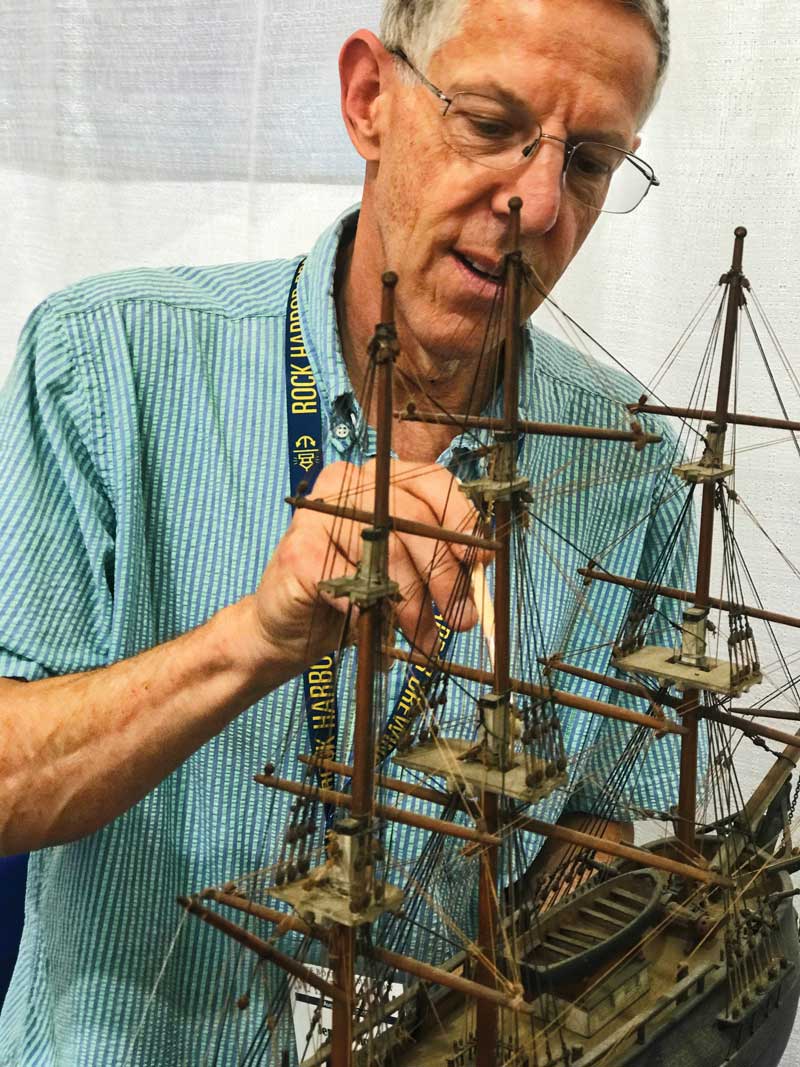 Jerome Morris at work on a model of the HMS Bounty. Photo by Polly Saltonstall Jerome Morris knows his boats, both big and small. Early on, while serving in the U.S. Merchant Marine, he worked as an ordinary seaman on a 600-foot oil tanker. Later, he did boat design work in the marine industry, as well as stints building and repairing boats. These days the boats he works on are much smaller. So small, in fact, they might fit on your desk or dining room table. Morris has translated his love for boats into a career as a master model maker.

“I started to build models as a way to pass the time,” Morris said. “Models were a way for me to be creative. It also gave me the incentive to do better than what I had seen on other models. Model building is a very creative endeavor. You are always trying to one-up yourself.”

Morris, 57, builds his models in a garage workshop at his home in Union. During a recent visit, he was carefully building a tiny chandelier for a nine-room dollhouse.

Morris, who grew up in the fishing village of Port Clyde, was inspired from an early age by boats he saw around him. As a child, he built small models.

After his stint in the Merchant Marine, he learned yacht design at the Landing School in Arundel, Maine, and went on to help design new boats for the Cigarette Racing Team in Florida. He did design work for several other boat firms before moving back home to Maine and taking jobs with boatyards here. That’s when he met the owner of South Thomaston’s Art of the Sea Gallery who was looking for marine models to sell. Morris started as model restorer for the gallery, and then struck out on his own. Art of the Sea closed in 2016.

Morris taught himself model-making, and always builds from scratch, cutting and fabricating all the parts himself. In addition to building new models, he also still enjoys restoring old ones, and typically has two models under construction at any given time, with six or seven in line for repair. “It gives me insight into how the original model maker solved a particular problem,” he explained. It also helps him learn more about boats.

A current ongoing project for Morris is repairing models for the American Merchant Marine Museum in Kings Point, New York. “The 10-ship model contract was awarded through a U.S. Department of Transportation bidding process. Before I put in the bid, I put in 25-30 hours doing just general research. This is the biggest job, for sure, that I have done—a big job for two hands.”

Back in his childhood, Morris and some friends launched a small model boat into the ocean from Marshall Point in Port Clyde. He never knew whether anyone found it. What is sure, however, is that hundreds of satisfied customers from around the world have discovered his models in the years since.

James Goldsmith lives in Reading, Massachusetts. He is interested in environmental issues and ocean preservation.

Jerome Morris can be contacted via email at jeromemorris62@gmail.com.