There has been a Great Paint Out in Maine every year since 2009, always at Grimes Cove, Ocean Point. Participants come from all over to paint outdoors and share their artistic visions. This year, 27 artists participated in day-long event on Sept. 4. Corinne McIntyre poses with most of the group (at center, wearing the white brimmed hat). Photo by Robert Mitchell It all began at an exhibition opening in 2009. Corinne McIntyre and some friends were enjoying the art when one of them said, “We all paint by ourselves, but why don’t we go out every Wednesday and paint together?” And so was born the Plein Air Painters of Maine.

The group was not unique. Plein Air Painters of America (dubbed “The Original Society of Outdoor Artists”) was established in California in 1986. But, as far as the friends knew, this was a new concept in Maine. The very next week the four artists gathered in Grimes Cove, East Boothbay, and set up their easels to paint. Little did they know they were spawning a movement. A decade later the Plein Air Painters of Maine includes more than 600 like-minded artists who paint outside together in 10 chapters statewide. 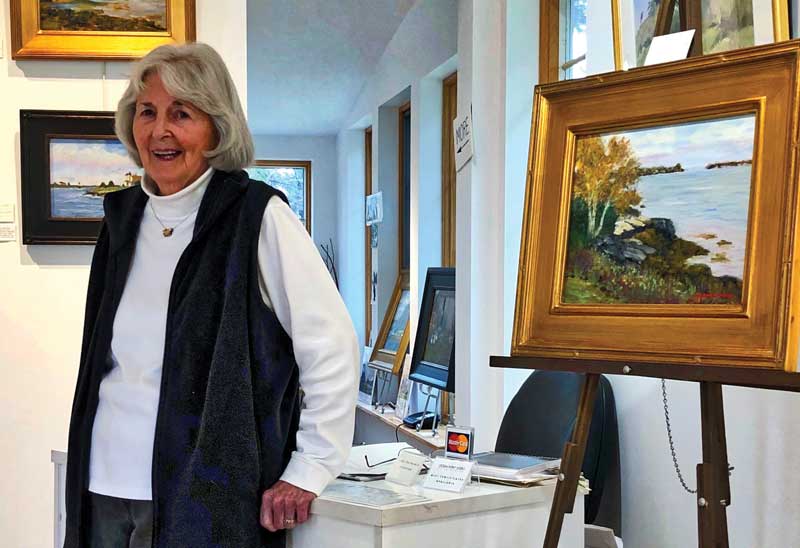 Corrine McIntyre in her Ocean Point Studio with one of her landscape paintings. Photo by Jenny Bennett The early driving force behind the group was McIntyre, a professional artist from Massachusetts who first came to Maine on her honeymoon, staying in a cottage overlooking Grimes Cove on Ocean Point in East Boothbay. She and her husband, Fred, returned to the area for vacations for several more years, all the while looking for a place to buy. One day when they were visiting East Boothbay, Fred took a detour on his way to buy a newspaper and spotted a “For Sale” sign on a wooded stretch of road leading away from Ocean Point. “He came racing back to tell me,” remembered McIntyre, “but I wanted to be on the ocean not inland.” 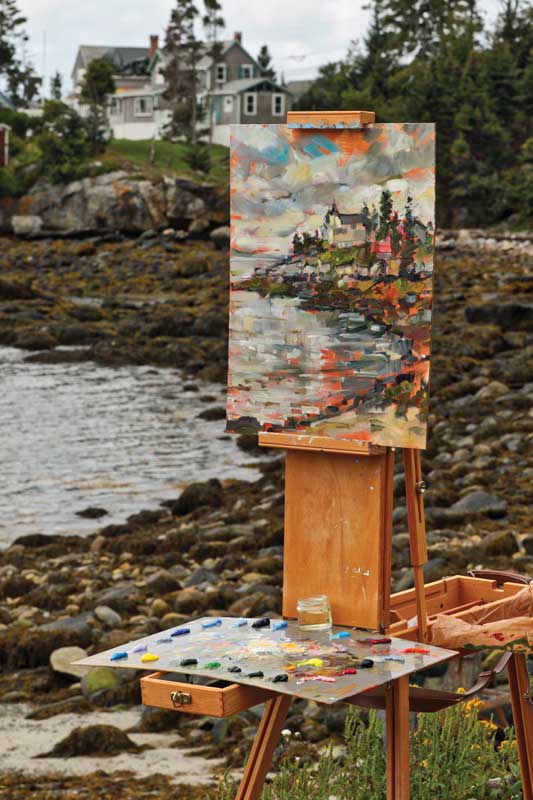 The Great Paint Out runs from 8:30 a.m. until 4:30 p.m. Some painters spend the whole day on one canvas, while others might finish two or three paintings. Photo by Robert Mitchell They went away to think about it and the inevitable happened. “We bought it as an investment until something else came up, something on the water,” she said. “But, of course, I soon realized that for year-round living, being on the ocean maybe wasn’t as practical. There’s the taxes for starters, and when the winter storms come in we’re a lot safer up here.”

Within months they had built a house, buying a post-and-beam kit from a company in Kittery, Maine, and doing most of the work themselves. Fred was hired as water superintendent for the town of East Boothbay and Corinne continued to work as a freelance technical illustrator and graphic designer. But fine art and the ocean called her and she slowly phased herself out of the design business.

“It was always my dream,” she said, “to be a full-time artist and have my own gallery. We opened the doors to Ocean Point Studio 27 years ago and I’m still here. I love it more than ever.”

The gallery stands alongside the McIntyre home barely one tenth of a mile from Shore Road, which snakes along the Ocean Point coastline. The modest space is bathed in natural light and the walls are hung with McIntyre’s oil paintings, mostly impressionistic landscapes painted outdoors on-site, many along the ocean.

“Just going out there, on the rocks, looking at something, becoming so involved, focused… you lose all sense of time. If there’s anything bothering you (not that I have anything bothering me!), it just fades away. I think it’s the same for people who sail,” she said, “that feeling you get, being one with nature. For me it’s truly magical… heaven on earth.”

Throughout the summer McIntyre goes down to the shore to paint at least three times a week, mostly early in the morning. In the winter, too, she goes outside from time to time. No matter the season, though, she paints every day. “Even if it’s just for an hour or so. Painting is always there; it’s a part of me. Even at night, if I’m bored, I’ll put on C-Span and sketch the people—I’ll mute the sound and just sketch their faces.”

Typically, she works alone but she joins the Mid Coast Chapter of Plein Air Painters of Maine most Wednesdays. Since its original conception the organization has fanned out across the state. Its members are artists who like to paint outside and who enjoy the camaraderie of other like-minded painters. Joining a chapter is simple. “When painters find out about it,” said McIntyre, “they contact the Member Caregiver and she adds them to the membership list. It’s as simple as that.” Members receive a weekly email telling them where and when the 10 chapters plan to meet in the coming week. Any member can join any group to paint in company. “There are no rules and no fees,” said McIntyre. “But the benefits are far-reaching: we learn from one another, discover different places to paint, learn about exhibitions and other events, and form long-lasting friendships.” 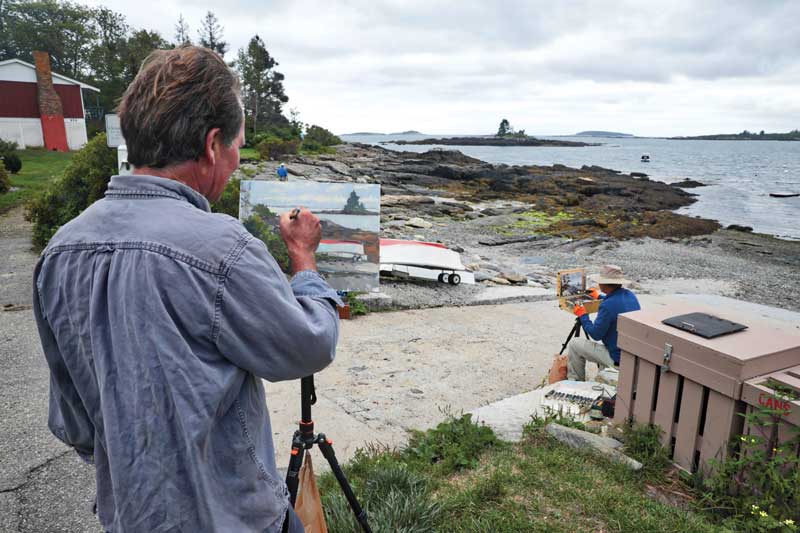 The plein air artists each bring their own interpretation to a similar scene. Here, Brad Betts, who sells his work at his Down East Gallery in Edgecomb, Maine, paints in the foreground. In front of him to the right, is Thomas Adkins of Southbury, Connecticut and Round Pond, Maine, whose work is sold locally in the Bayview Gallery in Brunswick, as well as at galleries in Massachusetts, Vermont, and Connecticut. Photo by Robert Mitchell

For most of the group’s 10 years McIntyre was the “Member Caregiver,” handling membership and the calendar, posting blogs and the weekly announcement. But a couple of years ago she passed the baton to artist Fran Scannell. “I only like to paint here and so the group rarely, if ever, went anywhere else,” she confided. “Occasionally they’d go off somewhere and I just wouldn’t go… it made me feel guilty.”

One of Corinne’s lasting legacies for the Maine group is involvement in the Oil Painters of America’s Great Paint Out. These events occur throughout the fall across the nation. In 2009 McIntyre applied to host for the state of Maine. She has organized a Maine event every year since, always around Labor Day and always at Grimes Cove.

Most of the artists who participate are from Maine—Boothbay, Searsport, Brooklin, Bristol—but others come from farther away, drawn by the company and the setting: the cove, its headlands and the islands beyond.

“They come together just to be outside and to paint for a day. It’s a wonderful thing,” said McIntyre.

The weather can be unpredictable but, rain or shine, the artists always find something to paint. Many come every year, others just once, having seen the announcement on the Oil Painters of America website. They come to paint and to visit with new and old friends, to chat and create, create and chat. Some deliberately set up next to a companion, others stay separate. Newcomer or old-timer, they all speak of Corinne McIntyre with great affection.

“She’s amazing,” said Fran Scannell, “She’s been painting all her life. She just never stops. And she does everything—all her own framing, her computer graphics, printmaking, everything. It just amazes me and I love her dearly. Everybody loves her.”

McIntyre for her part, while she enjoys painting alone, also delights in the people she meets through her art. “They come from all over the world, they stay for a while, they leave happy,” she said. “I’m a lucky woman.”

Jenny Bennett lives with her daughter in Southport, Maine.

Ocean Point Studio is at 130 Van Horn Road, East Boothbay, and is open most afternoons, year-round. To learn more about the Plein Air Painters of Maine go to: pleinairpaintersofmaine.blogspot.com