The best little sailboat in the world? 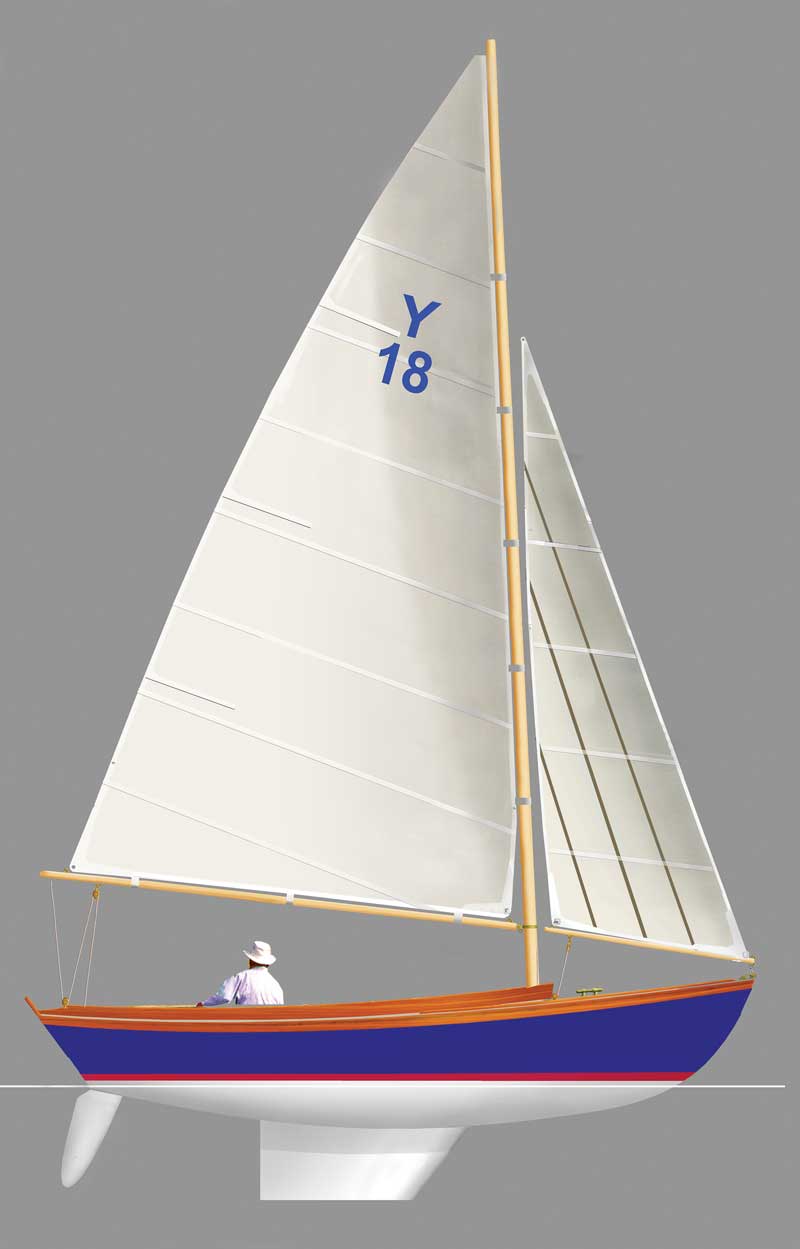 Instead of a long keel, Paine designed a shorter NACA foil with a separated elliptical rudder. The York 18 also has an extra-commodious sailing cockpit. Rendering by Chuck Paine

Call it prejudice, nepotism, or something of the sort, since the designer is my twin brother, but I think the York 18 might just be the best-designed small sailboat in the world.

Ever since Chuck Paine “retired” from his office in 2008, he’s mostly just dabbled, inventing boats for his own enjoyment. He built one in the barn adjoining his house, and is presently out there again, at work on a slightly larger version.

Paine has owned a Herreshoff 12½ for 40 years. He opines that it is, or was, the world’s greatest sailboat design. All his post-retirement boats are on that theme: modern upgrades on the H 12½. He has built 14-foot and 15-foot models, which proved successful, sailing well and selling for a pretty penny. A few years ago he drew up an even larger version, which is called the York 18.

How this latest incarnation came to be is an interesting tale starring Michael York, who is a living anomaly. Not because he is a workaholic or a perfectionist, but because he loves working with fiberglass. He absolutely itches to arrive at the shop each day and sculpt with fibers of glass; for him eau-de-styrene is the sweet smell of success. York has built many Chuck Paine designs over the years, the majority of them powerboats. He’d observed Paine’s success selling 14-foot and 15-foot sailing embellishments of the Herreshoff theme, and he wanted to get in on the game.

So York commissioned Paine to build an even bigger model.

Herreshoff 12½s were conceived over a century ago as a safe trainer for young sailors. It’s easy to understand why these small keelboats were so beloved by children and their parents. Unlike most training sailboats, a keelboat cannot capsize. Keelboats can swamp, however, shipping a whole lot of water usually as a precursor to sinking, but it requires a violent puff of wind. Also, without a boom tent, a keelboat that lacks a self-bailing cockpit could theoretically sink on the mooring after a big rain storm. Nathanael Herreshoff answered these shortcomings by specifying that the bow area of an H 12½ be walled off as a large air tank. He thus created a keelboat that was both inherently resistant to capsizing and impossible to sink. That said, a vintage H 12½ wouldn’t offer much respite for the crew after swamping. The original boats remained afloat with just a small portion of the bow above water. Paine realized that if you could fix that, then the resulting design would approach qualifying as the best little sailboat in the world.

The York 18 shares many of the benefits of the classic original, and will have lots of highly varnished mahogany or teak trim. A clever fiberglass tooler, York has fussed over his fiberglass molds and jigs for a year and a half. The combination of perfect tooling, extreme quality stitched roving, vinylester resin, the latest composite technology, and hidden tricks that make the parts fit together with precision are York’s stock-in-trade. As for those wooden embellishments, he has subcontracted the woodwork on the two boats that York is finishing up now to Alec Brainerd of Artisan Boatworks in Rockport. (York dreams about cloning himself in the future, so that he can both roll in fiberglass and exhibit his mastery in the tropical wood dust of the joiner shop.)

Paine’s designs share the attribute of a Herreshoff 12½, that it is basically a sailing cockpit. Herreshoff knew about self-bailing cockpits, but he also knew that for comfort, legs have to dangle to a low floor. The fact that the York 18 has an extra-commodious sailing cockpit meant paying careful attention to ergonomics. Paine agonized over seat angles, coaming height, width of side decks, and many other factors to ensure that, seated to leeward or windward, the crew’s comfort would be exceptional.

The major difference between Paine’s designs and the Wizard of Bristol’s original 12½ was that instead of a long keel, Paine designed a shorter NACA foil with a separated elliptical rudder. This seemingly small change, combined with improvements such as an unstayed carbon mast, made his previous experiments much livelier performers. This bigger version should share those boats’ delightful feel on the helm, enjoyable maneuverability, easy set-up, and not least—exceptional safety.

The target age-group for the York 18 stretches roughly between the 50s of Michael York and the age of Paine, which is remarkably close to my own, and which can be delicately described as approaching nautical twilight. It’s particularly apt that this design is fun for those of us with mature joints and ligaments, but also very safe. You could bail the ocean into a York 18 and at a certain point, due to airtight tanks fore and aft, with foam injected even into the bilges, it will become a floating Jacuzzi. Crew members could even use their hands to splash the water out, although most owners of these boats, with the wisdom of age, will purchase the optional automatic bailing pump.

This boat combines Herreshoff panache, which Paine had nothing to do with except to exhibit the good sense to leave it alone, with unbeatable aesthetics, scintillating performance, upscale detailing, old-person comfort, and super safety. I leave it to the reader to determine if I am overreaching by tagging the York 18 as the best little sloop in the world.

A Letter from the Publisher - Issue 122