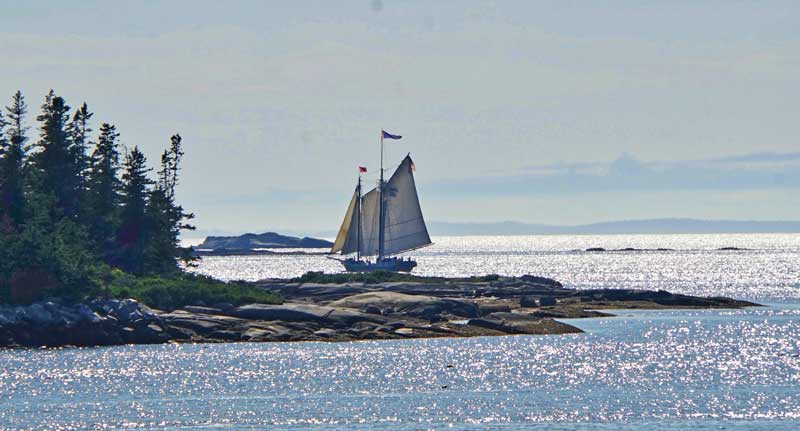 A schooner sailing off Vinalhaven.

An odd craft lay anchored at the head of the fjord which is Somes Sound: a roughly built steel schooner with heavy canvas for sails, guard rail cables for rigging, and Dugong, Tampa, inscribed on her stern.

Curious, I invited myself aboard. The only crew was a young woman who told me that the owner was out of town. Dugong was built to carry freight, she said; Caribbean freight, with cozy quarters aft, two large holds amidships, and a small engine. 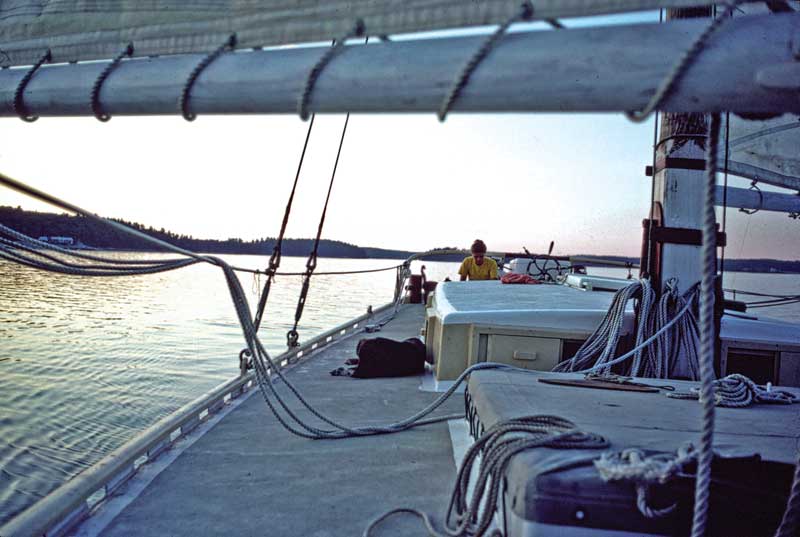 Morning on the Dugong.

Dugong and her crew worked winters in the eastern Caribbean, from Puerto Rico to South America, taking whatever cargo would pay, from island to island.

“Used Tires to Belize,” my new friend jokingly called her career. Sometimes when freight was scarce, she said, she and the owner would buy a load of whatever might fetch a better price down island, and they wound up occasionally selling the extras—1,000 oranges, for example—on street corners.

It could be hard work sometimes, she said, but it paid the bills, and the characters she had met would fill a book.

The schooner’s dog befriended my own; a few days later, I was invited aboard for a sail. We put my green skiff on the towline, hoisted the thick sails to catch the northerly breeze and headed out.

What must the people on all those fancy sailboats and motoryachts be thinking, I wondered, as they watched us reach down the sound, across the mouth of Southwest Harbor, and into the ocean beyond? 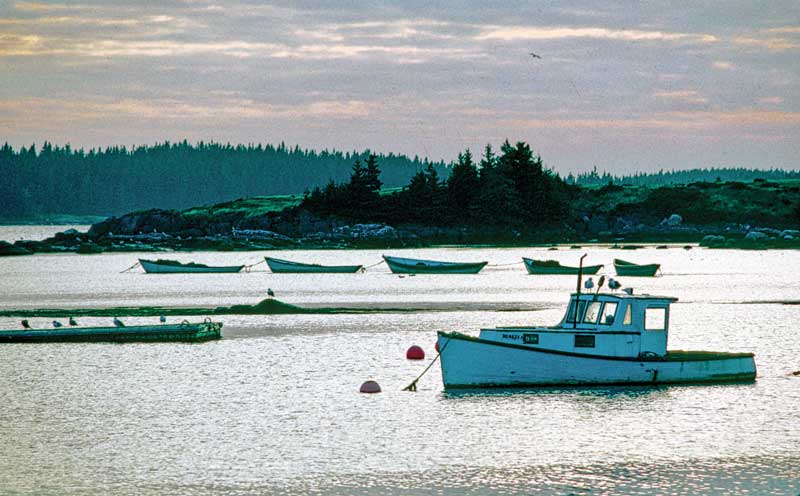 Into the past we seemed to go, sliding along almost noiselessly. Away from the glitz and noise of Mount Desert Island we sailed, in and out of the fog, with just the chart, the binoculars, the little depth sounder feeling for the bottom beneath us. Navigation the old way—time and compass—steering a course, estimating our speed, plotting all in pencil on the chart, and hoping the buoys would appear out of the ghostly white on schedule. When they didn’t, we’d anchor and wait for the fog to lift, maybe an hour, once a day.

I could close my eyes and it would be 1840, and we were one of the old wooden schooners that plied the coast from Boston and Portland, bringing supplies and freight to all the little towns up and down the long peninsulas before there were good roads, traveling east on the daily southwest breeze, unloading on the islands and the long necks of the land.

We sailed into tiny Frenchboro, to anchor and walk ashore—a scattering of houses, only workboats and us in the harbor.

On a walk with the dogs, through the woods and along the wave beaten bluffs of the south shore, we never saw another person.

A morning’s sail took us to Minturn on Swan’s Island. After a blustery reach across Jericho Bay in a smoky sou’wester, we were grateful to get the hook down on the north side of McGlathery Island. All hands went ashore to walk a rare long sandy beach in Merchant Row south of Stonington.

Silence at night, lobsterboat engines in the day; these places are a tonic to the soul.

Where the wind blew, we followed. When it was light, we lay at anchor, exploring in the skiff.

Working our way slowly back to the westward, we were reluctant to use the motor and break the spell. Ghosting along, sometimes with the lightest whisper of a breeze, our wake was just a ripple.

Isle au Haut in the afternoon, sliding past tidy white homes a century or more old, the lighthouse with curtains in the keeper’s windows, into East Penobscot Bay, and on, the breeze now northwest, the air dry, the fog gone.

The light finally failing, we picked our way into Carvers Harbor, Vinalhaven. I went ashore there, and watched as Dugong set sail, headed slowly down the coast.