After years in dry dock, iconic one-tonner heads back to the races 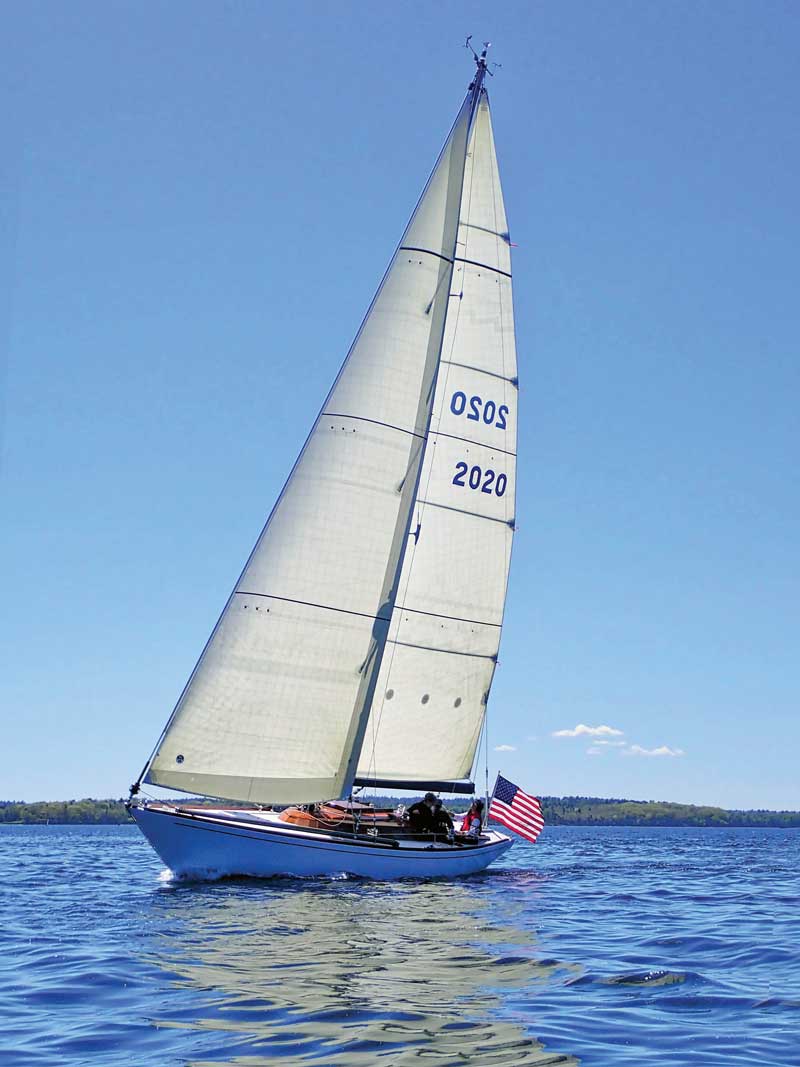 The Hawk was built in 1968 in Germany for a group of Americans as one of the first all-American entries in the international One-Ton Cup. A rebuild at Brooklin Boat Yard has given the iconic boat a new lease on life. Photo by Jennifer Sansosti

Steve White’s first experience on The Hawk was being given shots of whisky by the captain when he was a teenager visiting the then state-of-the-art one-ton racing yacht during a Cruising Club of America gam. The next time he saw the boat, many years later, she was in bad shape, featured in WoodenBoat magazine’s save-a-wreck section. By this time, White had taken over from his father, Joel White, as president of Brooklin Boat Yard and had earned a reputation as a world-class builder of wooden boats. He decided to save The Hawk, which at one time was so iconic that the North American One-Ton trophy was named in her honor.

“She is just as I had hoped,” he said. “Remarkably balanced. She just slipped through the water very nicely.” 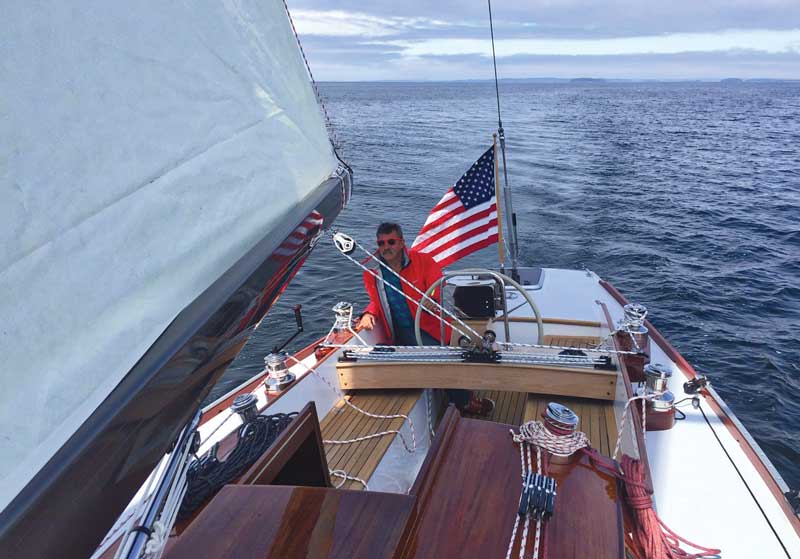 Brooklin Boat Yard’s Steve White sails the boat this past summer after its relaunch. The rebuild included rearranging the cockpit by converting the tiller to a wheel, moving winches and adding seats to make the boat more comfortable—one person who had raced on The Hawk back in the day said it was the most uncomfortable boat he’d ever sailed. Photos by Jennifer Sansosti 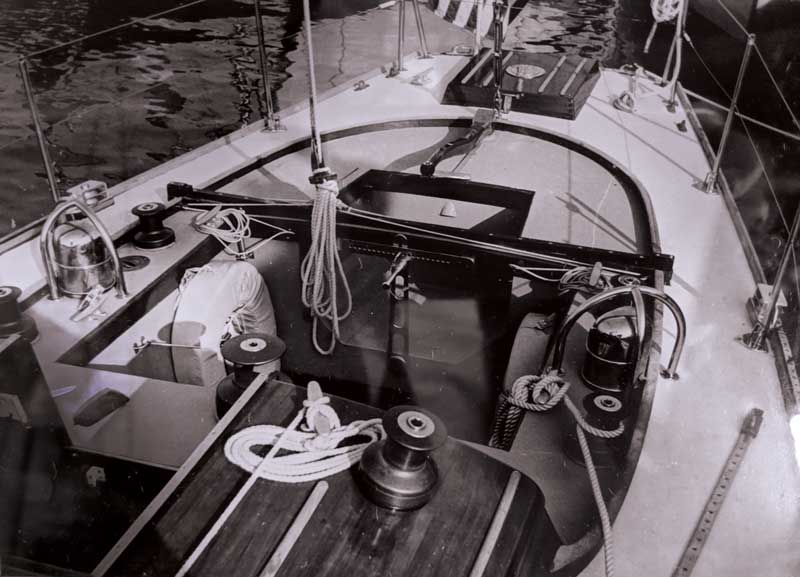 Built in 1968 at the DeDood Yard in Bremen, Germany, with mahogany planking and laminated oak frames, The Hawk was designed by Bill Tripp Jr. for a group of Cruising Club of America members, to be one of the first all-American entries in the international One-Ton Cup. The syndicate included yacht designer Henry Scheel, Daniel Bickford, Peter Comstock, William B. Dodge, Walter Flower, George F.B. Johnson, Donald P. Robinson, and William White. They called themselves The Ideal Partnership.

Boats competing in the One Ton Series were designed to a formula for competitive racing with no handicaps, i.e. the first boat across the finish line was the winner. The Hawk raced in the series in both 1968 and 1969 off Heligoland in the North Sea. Each country was allowed three entries. The Hawk finished seventh, ahead of the other U.S. entries, but behind the winners—in 1968 Hans Beilken of Germany, and in 1969 Chris Bouzaid of New Zealand.

In the early 1970s, The Hawk was modified to race under the IOR rule and competed in races up and down the East Coast, eventually collecting more than 35 trophies. White has heard from many people who recall racing on the boat—the list reads like a who’s who of yacht racing. Her last long-distance race was in 1981 from Marblehead to Halifax.

Eventually just Bickford and Dodge owned the boat, which spent summers moored off Bickford’s house at the head of Seal Cove in Vinalhaven. Bickford’s daughter Jula Sampson recalled that her father and Dodge bought out the syndicate after an episode involving a partner who had not paid his taxes. The IRS went after that partner’s share of the boat, sending the Coast Guard out to Vinalhaven to seize The Hawk and tow her off in dramatic fashion. “Dad was so mad and embarrassed; he didn’t want that ever to happen again. So, they dissolved the partnership,” said Sampson. 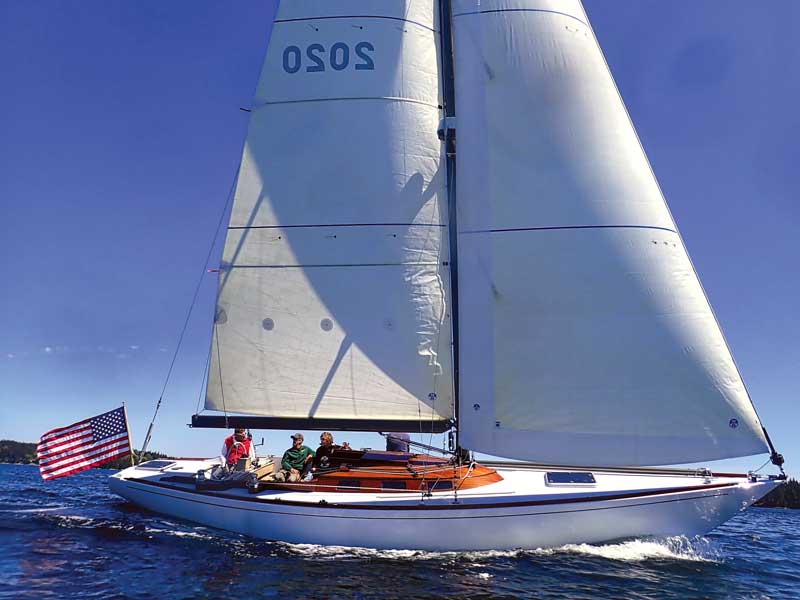 The rebuilt boat with new sails and rigging from North Sails, and a longer boom. Photo by Jennifer Sansosti

Built to be as light as possible for racing, The Hawk had few amenities for cruising. There were four pipe berths, a mini galley, and no forward berth. The head was in the middle of the cabin with no walls for privacy. Sampson remembers having to sleep on stacks of sails in the forepeak when cruising with her three siblings and parents. This writer remembers sailing the boat from Maine to Mystic, Connecticut, as a shy teenager, and obsessing the whole way about how to get the rest of the crew out of the cabin so she could use the head in seclusion.

When they became too old to enjoy The Hawk anymore, Bickford and Dodge donated her to the Island Institute, which sold the boat soon afterward to a man who hoped to restore her. He did some work, and then gave up. That’s when White stepped in.

“I remembered it with awe from the first time I saw it,” he said. “It had a great pedigree and more history than I even knew.” Plus, the boat was in remarkably good shape, with little to no rot. 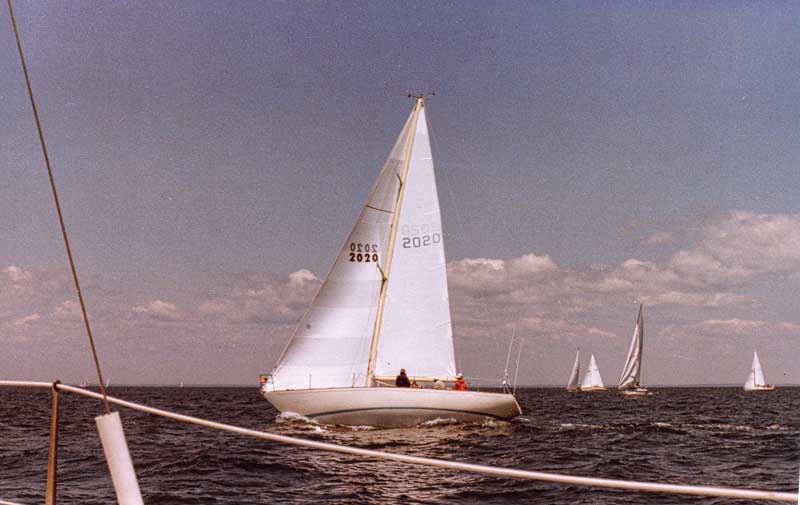 The Hawk racing in Penobscot Bay in the 1980s with a much shorter boom. Photo courtesy Jula Sampson

White brought The Hawk back to Brooklin and began looking for a client who shared his vision. In the meantime, he and his crew worked on the hull, splining seams that had cracked during improper storage under clear plastic, replacing some laminated oak frames and sheathing the hull with a thin layer of fiberglass. They also refastened the lead keel.

Then along came Lorentzen. A long-time sailor and yacht racer, he had raced across the Atlantic with one of The Hawk’s owners in 1972. “And I remember racing against her in Long Island Sound,” he said. “I thought any boat called The Hawk and with the sail number 2020 was pretty cool.”

Lorentzen had owned a 56-foot McCurdy and Rhodes cruising ketch for 15 years when his children were young. The family had cruised on Penobscot Bay, where they eventually bought a summer home ashore in Rockport. He missed racing, though, and replaced his ketch with a racier J/70. That was fun, but he still wanted to sail offshore. A friend suggested he look at old one-tonners. That’s when he saw White’s ad for The Hawk.

“She’s a very pretty boat and Steve has done a terrific job bringing her back,” Lorentzen said.

He could have asked White to replace everything on the boat, but chose not to. The Hawk still has her original aluminum mast, which has been refinished, and a refurbished engine. The galley has been updated. The head was moved slightly to one side, but remains separated from the rest of the cabin by only a curtain.

White and Lorentzen did make some other improvements, though. 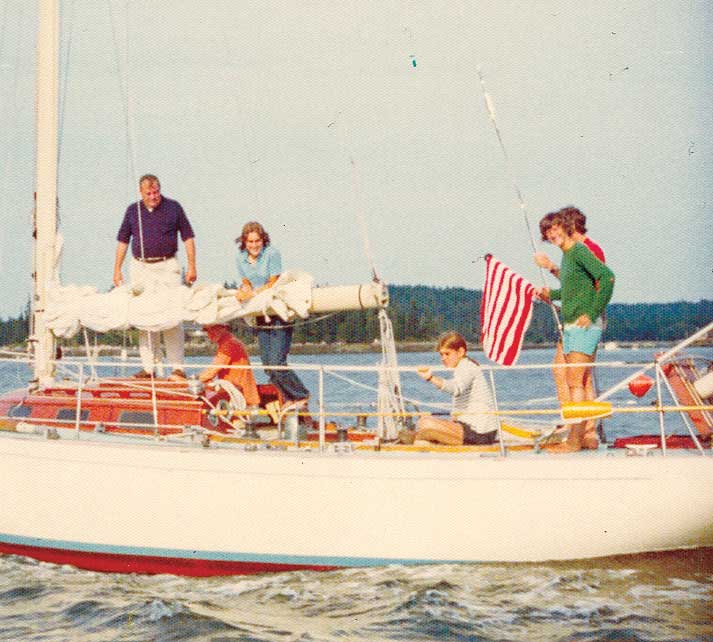 The Bickford family and friends on board The Hawk in the 1980s. Daniel Bickford, one of the original owners, is on the left. Photo courtesy Jula Sampson

The awkward cockpit, which was deep and tended to fill up with water in rough weather, has been redesigned. The engine, which used to be in the middle of the cabin (Sampson remembers using the top of it as a dining table) has been moved out of the way, under the cockpit. The tiller has been replaced with a wheel, and the boom, which had been shortened at some point, was replaced with a longer one. A large winch that once sat right in front of the companionway also has been moved, and Lorenzen added a removeable bowsprit so he could cruise with an asymmetrical spinnaker.

The Hawk’s original rig and sails were made by Ted Hood. While some older sails are still with the boat, Lorentzen had new sails and rigging made by North. He plans to race The Hawk in classic yacht regattas and to take her cruising with his wife.