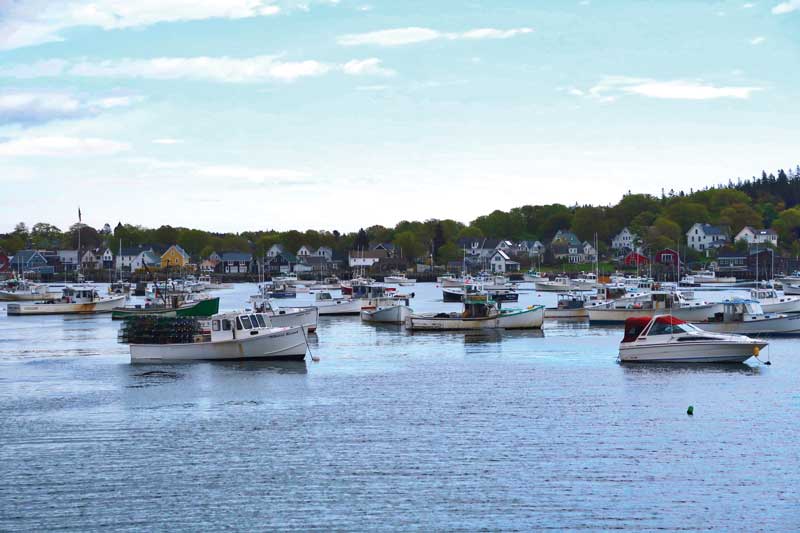 With more than 100 lobstermen and women fishing out of Carvers Harbor, finding space for cruising yachts can be challenging. Photo by Mimi Steadman

As our ferry steamed past the approach to the Fox Islands Thorofare, I thought longingly of the exquisite anchorages that lay to port: Perry Creek, Seal Bay, Winter Harbor. But the Captain Charles Philbrook held its course, continuing around through Hurricane Sound to Carvers Harbor.

While there’s nothing finer than dropping anchor in one of Vinalhaven’s sublime coves, the 15-mile, 75-minute ferry ride from Rockland to Vinalhaven provides a carefree way to venture into busy Carvers Harbor, where more than 100 fishermen land some five million pounds of lobster annually (second only to Stonington’s catch).

Once ashore, we walked a quarter-mile up the road, past the sheds at Vinalhaven Fisherman’s Co-Op and Hopkins Boat Yard, to the heart of the village. There, a massive, five-foot-tall stone eagle perches on two granite plinths. Initially part of a convocation of 22 eagles hovering atop New York City’s first Penn Station, this century-old raptor came to roost on the island after that monumental building was demolished in 1963. It was originally thought the 5,700-pound sculpture had been carved from Vinalhaven’s pink-tinged granite. It was soon discovered, however, that the eagle is marble, quarried elsewhere. Even so, the town went ahead and installed it in a special ceremony in 1966 and it has kept watch here ever since.

I like to think the reception given this eagle-from-away is indicative of how the island welcomes all newcomers. Sharon Mrozinski, proprietor of The Marston House on lower Main Street, confirmed my theory. When she and her husband moved here to open their antiques shop three years ago, they felt immediately embraced by the tight-knit community of about 1,200. “Everyone looks out for everyone else,” Mrozinski explained. “If the lobstermen see someone go out in a kayak, and they don’t see them return, they’ll go looking for them, even if they don’t know them.” 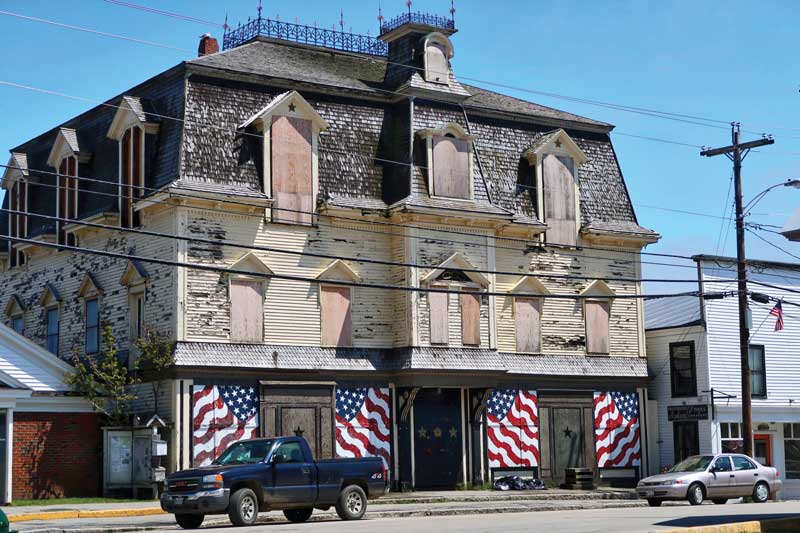 Up the street at WindHorse Arts, Alison Thibault welcomed us warmly, too. Looking up from assembling her colorful, fused-glass bracelets, she offered tips on lunch spots and shopping before I could ask. She also shared her take on life here: “We have all the good points and bad points of any small town, but being on an island magnifies them. Of course, that means the good things are even better.”

If you do plan to visit Carvers Harbor by private boat, the key to a warm reception is calling harbormaster Jim Knowlton in advance (207-756-0209). “The town doesn’t have any rental moorings,” he told me, but a few private owners keep money jars on their moorings. “Everyone’s welcome,” he said. “Just call me first, and we’ll figure out a place for you. I got the answers, or I’ll find ’em.”

Knowlton is also the animal control officer. “It can be a friggin’ nightmare in the summertime,” he said. “I could be taking care of things in the harbor or chasing a horse down the road.”

A decade after the eagle alighted in Carvers Harbor, pop artist Robert Indiana—best known for his LOVE sculptures—moved into the former Odd Fellows Lodge, a faded-yellow Victorian ark looming over Main Street. Since Indiana’s death at 89 last spring, lawyers have been wrangling over the building’s future (many locals hope for a community center) while the paint peels and pigeons roost in the eaves.

The sad condition of this grand old turreted edifice is especially distressing because it dates from Vinalhaven’s 19th- and early-20th-century glory days, when the granite industry brought fortune to the island. The quarrying boom also drew hundreds of Scandinavian and European stonecutters. Feeling at home, the young foreigners settled down and began families. Many of their descendants live here today, paying forward the long tradition of welcoming folks from away.

If You Go to Carvers Harbor

Greets Eats, a food truck parked just up the road from the ferry dock, dishes up acclaimed lobster rolls, burgers, and even lobster-topped burgers. At lunch and dinner, The Nightingale (ex-Harbor Gawker) serves appealingly eclectic dishes on a deck beside Main Street and in an all-white dining room with views of Carvers Pond. The Sandbar, a long-popular local hangout, has good pub grub. Everyone recommends the coffee at Island Spirits, which also sells fine wines, beers, cheeses, and other goodies. Tucked behind Davidson Realty, Skål is a new, Scandinavian-accented speakeasy offering drinks, small plates, and live music.

There are a few private moorings with money jars on them (average $30 per night). Tie-up at the dock is limited to dinghies of 16 feet or less. Be sure to give harbormaster Jim Knowlton a heads-up before you arrive (207-756-0209). He may be able to arrange a space at a commercial dock while the business that owns it is closed. Carvers Harbor Market, just steps from the docks, is a good place to provision.