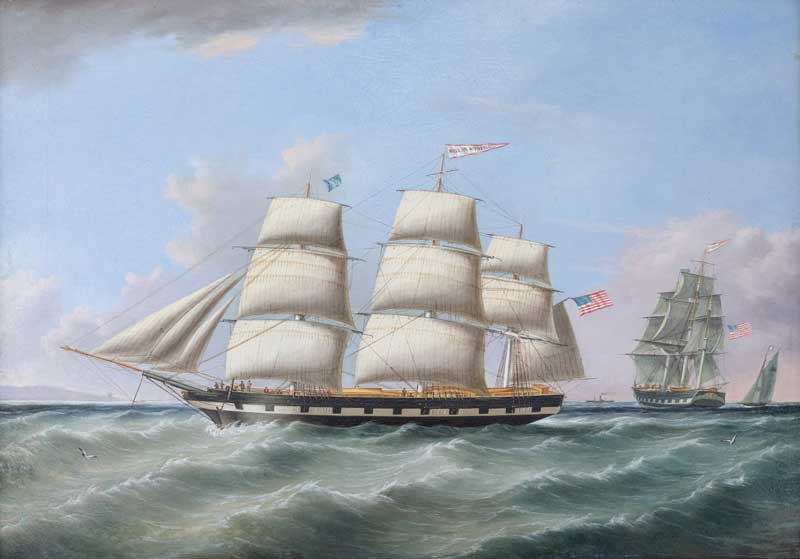 The ship William Witherle, shown in this painting by an unknown artist, was named for a Castine merchant whose business partnerships helped shape the town’s success from 1820 to 1855. Courtesy Witherle Memorial Library

“The price of Cotton in Europe we expect will bring this article forward earlier than usual in N.Orleans and the excellency of your Ship we hope will insure you the first freight … It would be convenient for us to receive a Cargo of Salt from Liverpool on your return next fall … pay particular attention to the market at N.Orleans and see what articles of the produce of this Country will do best. Especially learn what can be done with Pickled Codfish.”

These instructions were given to Captain Henry Whitney in 1823 by the owners of the new Castine-based ship Canova. They ran well-ordered and disciplined operations both at sea and ashore to guard against known risk factors. It was a highly profitable enterprise, despite the endless list of trouble, from tropical diseases and deadly storms to human error and the outbreak of war.

At its height, Castine’s population was not more than 1,500 people. Yet shipyards there built more than 120 sailing vessels in the 19th century including at least 18 full-rigged ships—a remarkable feat that has become a part of the town’s hidden history. With skilled labor from home and nearby towns, men in the Perkins, Crawford, Noyes, and Webster families operated their shipyards year-round.

While Castine’s arc of economic growth and decline resembled that of many coastal towns, it developed through a unique set of circumstances. For one, Congress acted in the 1780s to regulate trade and collect revenue on the Atlantic coast. Castine, a busy port with a well-protected deep harbor, became the hub for one of the 10 customs districts established in Maine. Remoteness by land was not an issue—people and goods traveled by water. 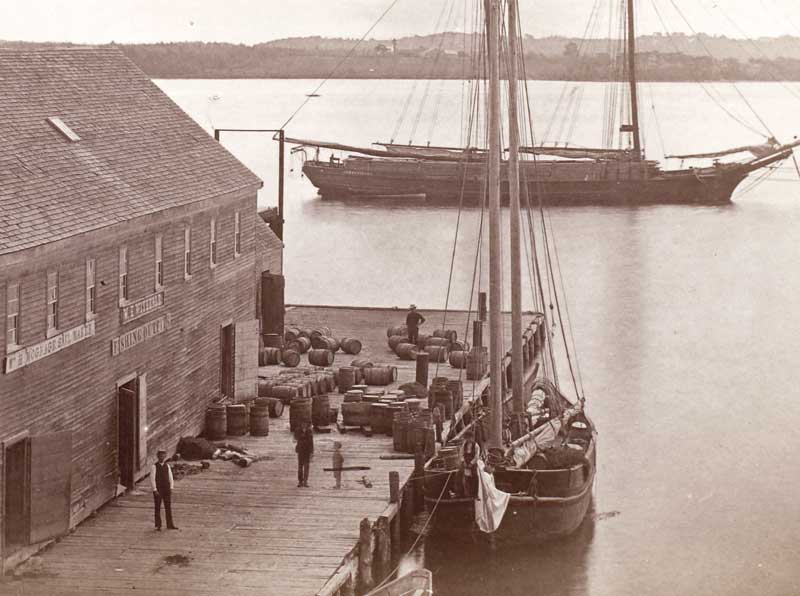 This circa 1873 photo by A.H. Folsom shows one of a dozen wharves in 19th century Castine. The fishing schooner in the foreground is loading barrels of salt at W.H. Witherle Fishing Outfits to preserve its catch. Courtesy New England Historic Genealogical Society and the Castine Historical Society

Next, the brief British occupation of Castine near the end of the War of 1812 resulted in significant profits for a few local merchants. Thomas Adams, a savvy young entrepreneur who arrived in Castine around 1802 as a school teacher, applied himself to mercantile partnerships prior to 1810. His Masonic friends wrote that the British appointed him auctioneer in 1814: “a very lucrative position, as many prizes [captured U.S. merchant vessels] were brought in and much property sold. His enterprise thereafter contributed much to the prosperity of the place, as he, in connection with others, entered largely into the building of ships … and extensively engaged in the fisheries.”

Castine ships stand out because they were both built and homeported in Castine. Maine shipyards were then, as now, well-known for building vessels of all sizes and rigs of high quality and low cost. But most Maine-built cargo vessels were homeported in Boston or New York or farther afield even if they were owned in Maine and captained by Maine shipmasters. Rarely did they carry cargo to and from the town where they were built. 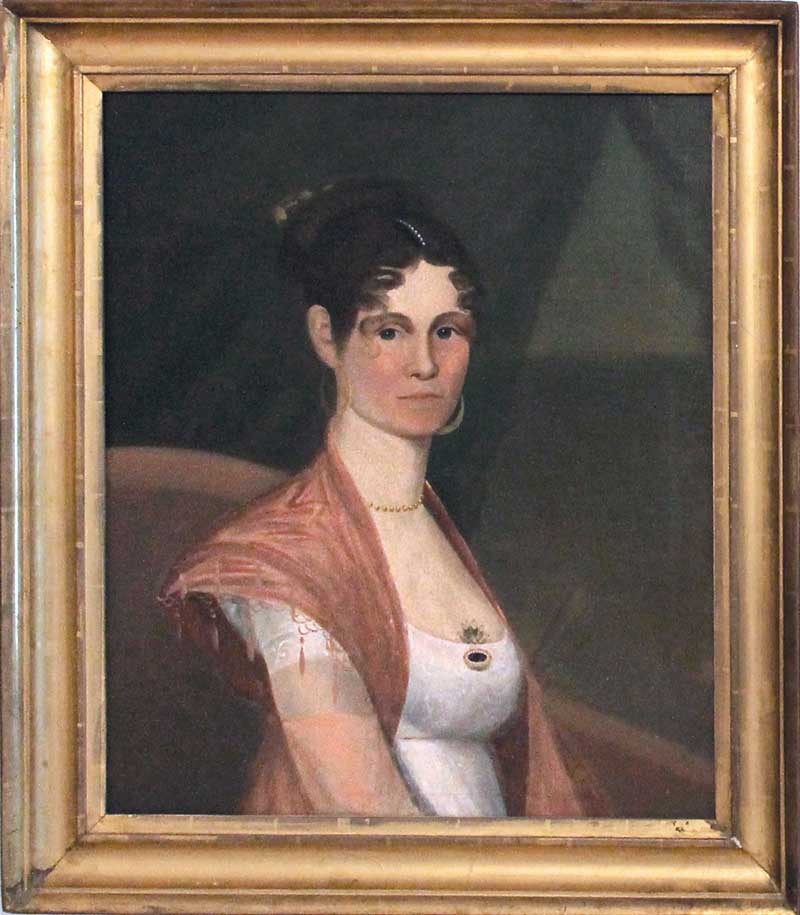 Lucy Perkins Whitney (1785-1866), the wife of Capt. Henry Perkins, lived a comfortable life in Castine but endured a striking amount of personal tragedy. She lost eight of her children and her husband before her own death in 1866. Most of these deaths resulted from illness, weather, and chance in the shipping business. Portrait c. 1805, artist unknown. Courtesy Elizabeth Ames Macdonald and the Castine Historical Society

Castine’s merchants and shipbuilders who supplied the fisheries entered the profitable cotton trade, independent of Boston or New York. Ships manned by local captains and crews carried the abundant supply of salt-cured fish, timber, and other local produce to southern U.S. ports, mostly New Orleans. The fish was sold to cotton planters as inexpensive food for enslaved workers. Captains there negotiated for cotton freights at the best price for speed to European markets. They then loaded at Liverpool, England, or Cadiz, Spain, the loose salt needed at home for use by the fishing industry to preserve the offshore catch.

While most of that activity took place across the ocean, Castine’s working waterfront catered to fishermen. The ship chandleries and salt sheds were known to supply 300-plus schooners annually. Maine fisheries scholar Wayne O’Leary wrote “the New Orleans trade preserved a modicum of regional economic autonomy and did much to encourage the growth of an independent fishing industry in eastern Maine.” Fittingly, this self-reliant enterprise began just after a majority male voting population in the District of Maine finally agreed to separate from Massachusetts and govern themselves as a new state. 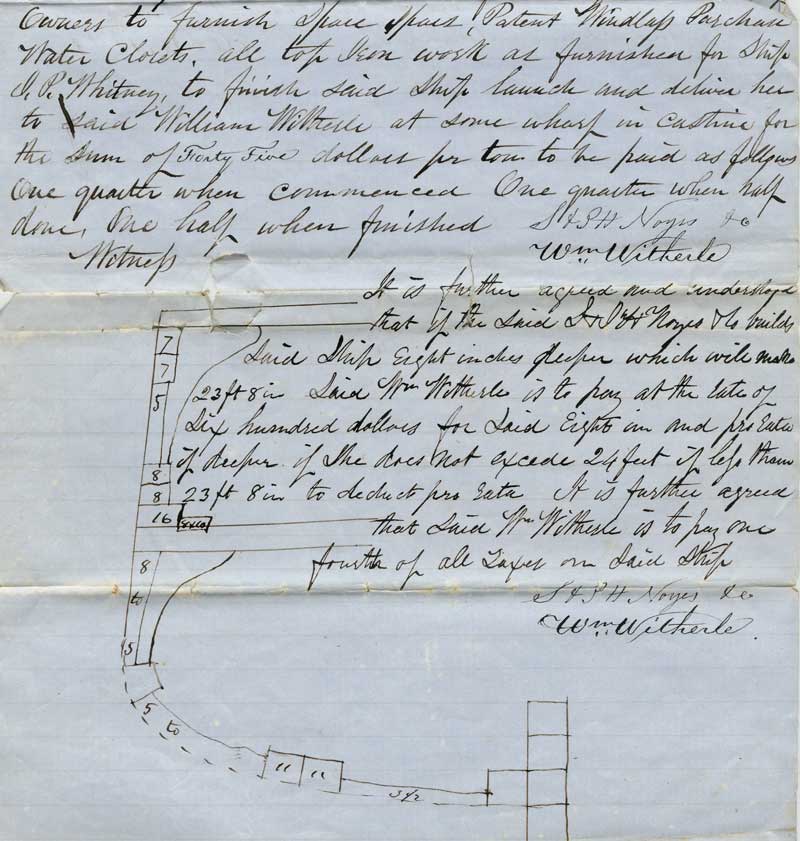 In 1853, William Witherle signed an agreement with shipbuilders S. & J.H. Noyes & Co. for his quarter share of a new ship. The three-page letter of detailed specs for materials, dimensions, amenities, and payment schedule includes a cross-section drawing of the hull shape complete with framing dimensions. Courtesy Castine Historical Society

Both the tonnage of Castine ships and the amount of the profits grew as the trade expanded and diversified. Captain Leonard Jarvis Whiting, who had served as cabin boy under Captain Whitney and married the Captain’s daughter Frances, wrote from Castine to his brother on September 19, 1855, “The Whitney [ship J.P. Whitney] had arrived safe in New Orleans & freights are first rate. She will make a first-rate trip of it … My part will be from 4 to 5 thousand dollars. That is better than railroad stocks or Ill. [Illinois] land.”

Captain Whiting knew well that a “first-rate trip” was easier said than done. Along the way to prosperity no one was untouched by trouble, hardship, and tragic loss. Leonard Whiting himself died a few months after that letter was written, leaving his wife a young widow with two small children.

The short life of Solon Hanson, a young man who grew up in Castine and aspired to be a ship captain like his father, illustrates both the good times and the bad in the seafaring life. Solon worked a couple of years on fishing schooners, made one voyage with a mean ship captain, and finally had a berth in 1857 as seaman on the Castine-built ship Picayune. After the passage from Castine to New Orleans, he cheerfully wrote to his mother at home in Penobscot, Maine. “We arrived after a safe and prosperous passage of twelve days from Castine ... for all our crew was nothing but downeast fisherman we handled the ship as if she was a pilot boat [and] the mate says he never saw a better crew for his life.

Captain and Mrs. Hanson received news several months later from Cronstadt, Russia, that Solon had become ill on the voyage and died soon after the ship came into port. He was 19 years old.

America’s international maritime trade declined rapidly after 1860 due to fundamental shifts in economics, technology, and politics. A financial panic in 1857 was followed by the Civil War. Southern cotton ports closed, Great Britain nearly joined the Confederacy, and war premiums dramatically increased insurance for freight. In 1866, an act of Congress ended decades of financial incentives awarded for offshore fishing. It was a “perfect storm” of unavoidable risk. Owners cut their losses by selling their ships to foreign interests. Although merchants and ship owners in Castine met the challenges with dexterity and optimism, they no longer had the profitable trade in fish, cotton, and salt to sustain the local economy.

Edward Brown, the teenage brother of a Castine ship captain then serving in the Union navy, wrote in March 1864 that there was nothing to do in Castine for work. Against his parents’ wishes he considered enlisting in the army because “the lard is all gone. The meal is nearly  all [gone] and we are on the last [barrel] of flour.” He told his brother “I believe that they expect a ship load of salt hear [sic] sometime next month. I believe they are agoing to salt the place down for safe keeping & I think they ought to.” Edward died in 1867 aboard a Castine-built fishing schooner that wrecked off Nova Scotia.

Paige Lilly lives in Blue Hill, Maine, and works at the Castine Historical Society on the town common in Castine.

For the 2019-2020 seasons, the Castine Historical Society exhibit Risky Business explores the details of Castine’s shipbuilding, fisheries, and global trade. For more information: 207-326-4118 or go to www.castinehistoricalsociety.org