You can, on a paddleboard 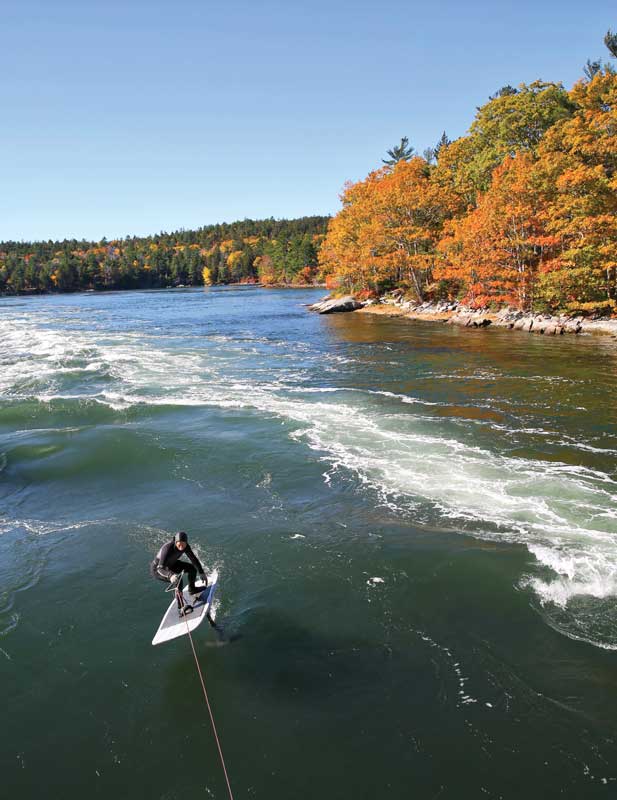 Surfer Peter Lataille has experimented with building his own boards and foils. Here he tests one of his creations in Blue Hill’s reversing falls. Photo by Art Paine

Less than a decade after stand-up paddleboarding earned a following in Maine, the addition of a hydrofoil wing to a surfboard or shortened SUP has added a new element for adventurous paddlers. Hydrofoiling, also called foilboarding or foiling, is the latest evolution in board sports to capitalize on Maine’s bounty of wind and water. The lift of hidden wings turns a thin board into a real-world magic carpet ride.

The technology is simple. Front and back wings on the foil create areas of high and low pressure resulting in lift as it moves through the water. An aluminum mast connects the board to these submerged wings, the length of which determines how high you can fly. As long as water moves over the wings at roughly 5 to 8 mph, the foil will lift. But therein lies the challenge. The speed must be generated by some combination of paddling and a hopping technique, called pumping, with a heavy dose of current, wind, or wave energy. 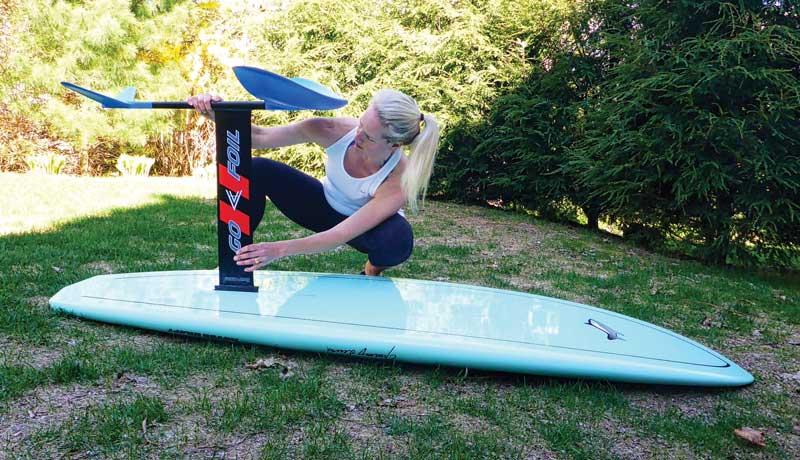 The author attaches an aluminum mast with wings to her paddleboard. Photo courtesy Kate Bates

While the physics is simple, mastering its application on a small board is not. Learning the delicate balance required to keep the board level can take weeks of consistent practice. Ideal conditions on the ocean include an outgoing tide against you with a minimum 30-knot wind and swell behind you. These conditions are not particularly common or easy for beginners. As a result, most Mainers tackling the sport are learning by being towed behind a boat. With just 8 knots of boat speed, riders up to 180 pounds can get a foil flying.

It’s worth noting that foilboarding can be dangerous. When I ride, I wear a wet suit, life vest, ankle leash, and most importantly, a helmet. The hydrofoil weighs 10 pounds, has plenty of sharp edges, and is attached to the board with a solid, aluminum mast. When the rider falls off, the unweighting of the board causes it to accelerate and launch forward, making it a hazard to anyone nearby. Understandably, this makes foils an unwelcome sight at popular surf breaks where they can severely injure traditional surfers. The sport is best learned away from others on open stretches of water. 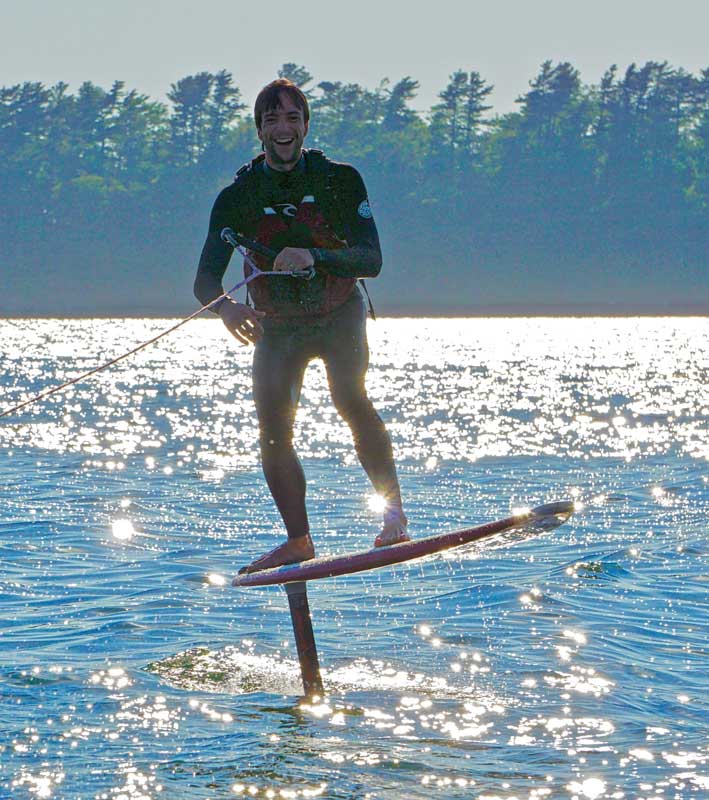 A few years ago, as the sport caught on elsewhere, it was impossible to demo and purchase a hydrofoil board in Maine. The delay wound up being beneficial because the equipment, especially for downwind foiling, innovated rapidly. Wing size increased while boards were shortened, narrowed, and thickened. By last summer, a few Maine businesses began to stock gear. In the midcoast, Brian Cody of Port Clyde Kayak and SUP offers a couple of different sized boards and wings. In Southern Maine, Ryan and Andy McDermott at Blackpoint Surf Shop carry other popular brands.

The McDermott brothers have parlayed excellent surfing skills into foil boarding, experimenting while being towed behind a boat. Previous experience riding a board, especially wakeboarding or surfing, greatly accelerates the learning curve. When asked if he thought foil boarding would take off in Maine, Andy McDermott said, “Most people want to be on the water in Maine, not necessarily in it. That’s the challenge with all board sports here. If it’s going to catch on, it’ll probably be in the warmer waters of Maine’s lakes.” 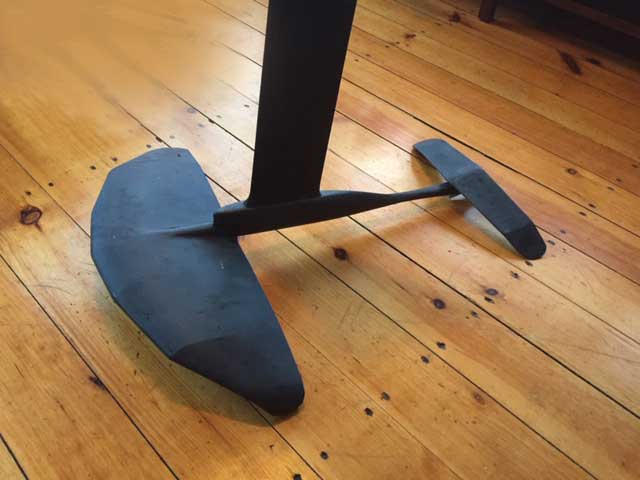 Farther inland, whitewater river surfer Peter Lataille of Hamden, Maine, has carved his own, unique path. When foilboarding caught his attention, he didn’t shop for gear. Instead he fabricated his own boards and wings. Through a laborious process, he uses strands of epoxied carbon fiber to craft wing-shaped skeletons that he fills with foam and wraps with additional sheets of carbon fiber. Most of Lataille’s practice has taken place without a boat. Instead, he has harnessed windy days on the Penobscot River and in a deep-water channel off Lincolnville. He has also surfed where the river empties near Higgins Beach and held a rope tied to the bridge at Blue Hill’s reversing falls.

“The coast of Maine is not as dependable as the coast of Maui, but there are plenty of days that are worth the effort to foilboard,” he said. “When the foil finally lifts, everything goes quiet and calm. It’s so beautiful.”

For me, the path to foilboarding began with ocean kayaking. After more than a decade in the seated position, I embraced stand-up paddleboarding in 2012 because it freed me from the fears that came with a capsized kayak. On a SUP, there is no struggle to get out of a dumped boat or to turn a waterlogged kayak upright. Instead, a SUP felt as safe as a floating dock attached to my ankle leash. This gave me the confidence to take longer, bumpier rides.

A desire to move beyond paddleboarding began on channel crossings and downwinders from Camden to Lincolnville. Only male friends would tackle such sloppy conditions, which forced me to dig hard to keep pace with stronger paddlers. I longed to take more advantage of the wind and swell energy, a desire that led to a clumsy windsurfing phase—watching telltales, wrestling the uphaul, stumbling around the mast foot, and ducking the boom. With Penobscot Bay’s wealth of shifting winds, windsurfing seemed to combine all the hardships of sailing and surfing onto a single 8-foot deck. 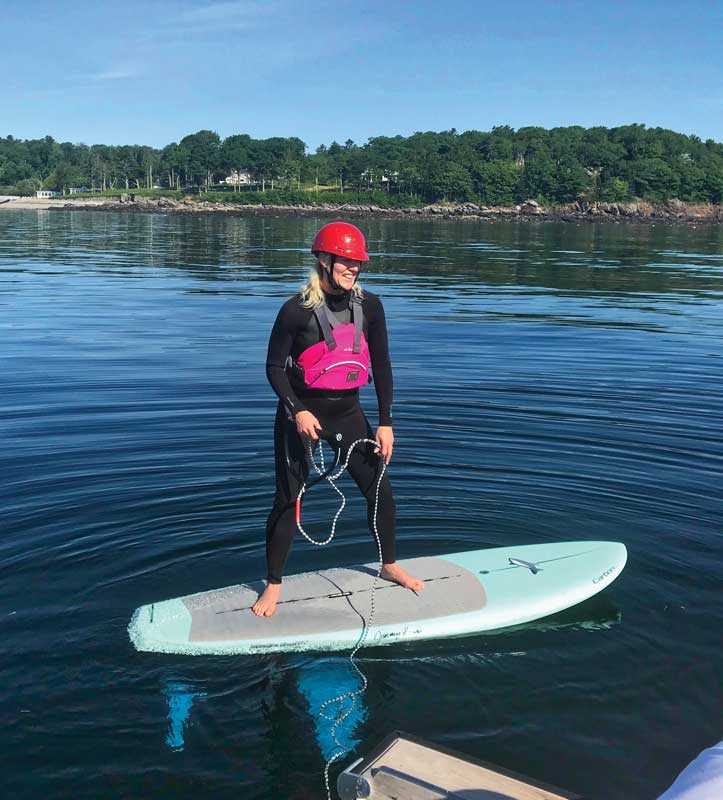 The author takes a solid stance on her board in preparation for being towed. Note the long blue wings visible in the water below the board. Photo courtesy Kate Bates

Then I saw a video of a Hawaiian foil boarder hovering above the water, barely getting his paddle wet. I bought equipment in the spring of 2018 and watched for windy days and outgoing tides. In the shipping channel off Camden, I paddled vigorously and pumped the board by jumping up and down on it, trying to persuade the foil to lift. Occasionally I felt the wing vibrate, but otherwise nothing happened. With the submerged wing acting as a keel, the new board became the slowest SUP I owned.

Then my husband and I bought an old Whaler and began towing with friends on Penobscot Bay’s glassy days and going to Megunticook Lake when the ocean was too rough. The steady speed of the boat got me flying. I finally found the sensation of float and glide that I had been chasing. Suspended above the water, freed from all the friction, foiling feels like being a bird in flight. This summer, the goal is to leave the tow rope behind. As equipment improves and costs decline, I hope other paddlers will join in. Until then, a few intrepid enthusiasts will rely on each other to prove foilboarding’s potential in Maine.

Kate Bates is an ocean paddler who lives in Camden, Maine. Follow her water adventures on Instagram: @mainecoastsup