This agile little insect can walk on water 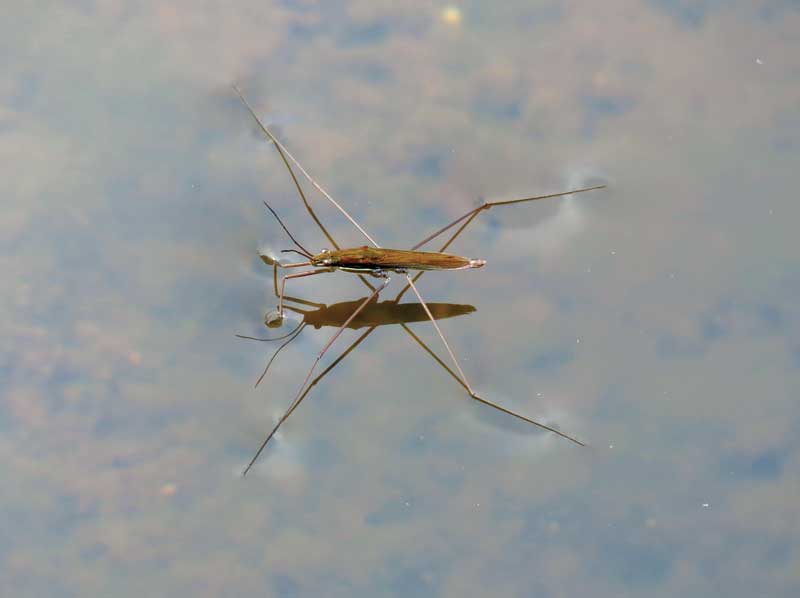 Water striders walk on water, thanks to water’s surface tension and thousands of tiny hairs on their legs and bodies that trap air and repel water. Photo by Susan H Pike

Summer is fast approaching, and soon they will be zipping across the water at a great rate of speed. No, this does not refer to motorboats, but rather to a creature that seemingly walks on water. Better than that, it glides, like a skater, on a calm surface with confidence and determination, at speeds above three feet a second.

I am talking about water striders, also known as pond skaters. Members of the Gerridae family of insects, there are about 1,700 species of water striders worldwide. In addition to a beak-like mouth with piercing and sucking mouthparts, their most exceptional feature is their ability to maneuver on water.

How do they do that? The answer has three parts.

The first concerns the physical nature of water. Positively and negatively charged molecules are attracted to each other, creating tension and a thin membrane on the water’s surface. This leads to some of water’s properties, such as the way raindrops bead on leaves and even the way water can drip from a leaky faucet. The surface of water is elastic, allowing the water strider to scoot around, only causing slight dimples where its legs touch the surface. This is possible because of those cohesive water molecules.

The second part of the answer involves water striders’ three pairs of legs. Each pair of legs is shaped differently and has a different function. The short front pair is used mostly for catching prey. The middle pair acts as oars—two long thin legs that provide the main propulsion for the insect, sweeping forward and backward along the surface. The hind legs are the longest, and not only help steer and brake, but, along with the middle pair, aid in distributing the weight of the insect so it can best use the water’s surface tension and stay afloat.

The third part of the answer is invisible to the human eye and only becomes evident under a microscope. Thousands of tiny hairs known scientifically as hydrofuge hairpiles cover every surface of a water strider’s legs and body. These hydrofuge hairpiles are waterproof, and trap tiny air bubbles in a groove along their length. This protects the insect from being splashed by a wave and sunk. However, water striders can go under water to escape would-be predators. They then just bob back up to the surface.

As the weather warms and activity picks up on Maine lakes and ponds, keep an eye out for the speedsters: not the big ones that make big wakes, but the many little water striders, going about their business, walking on the water.

Amy Campbell has spent part of every summer of her life on a lake in Maine. She, too, used to zoom but now she just putt-putts.