A comfortable and low-key camp on Moose Pond 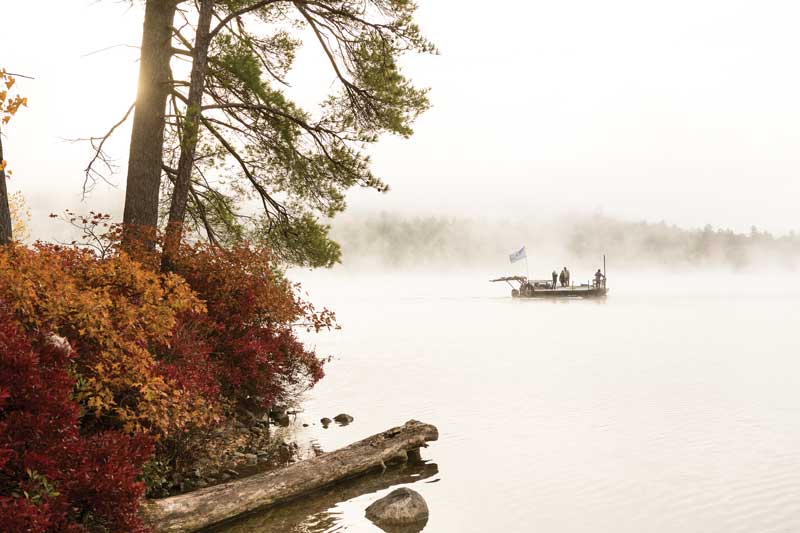 When you set out to build a house on an island, things that may never have occurred to you take on primary importance. For example, just getting materials and workers to and from the site becomes a major logistical challenge, especially during those months when the lake is not frozen.

Portland architect Will Winkelman and his crew resolved that and other challenges to create a low-key, but comfortable camp on a small island in Moose Pond, which is actually a lake in the southwestern part of Maine.

“I was talking to builders, and when I told Henry Banks that the builder would have to construct a barge, his eyes lit up,” said Winkelman, describing his conversation about transportation with Banks, whose firm, H.B. Wood Company, handled the construction. “That’s how I knew that he was the right builder for this project.”

Banks ended up building a custom-designed barge that easily carried people and supplies back and forth.

At a little more than three acres, Wood Island is the only island on Moose Pond in Oxford County. When Winkelman’s clients bought the property, it came with a small boathouse on the mainland, a short boat ride away.

They had a wish list for the project. They wanted a summer camp with a remote and undeveloped feel, but they did not want to go camping. They wanted to leave the island’s large oak trees as undisturbed as possible. The house had to be big enough to provide comfort for friends and family, but they abhorred making a statement with anything that did not look like an unpretentious Maine camp. They wanted it to feel rustic, but they also wanted light and warmth.

“And, the house has to generate its own electricity, since there are no power lines going out to the island,” Winkelman said.

The island, which is heavily wooded, is at the less developed end of the pond, he explained. The owners wanted to make sure that the buildings blended with their surroundings, and they did not want to clear big view-scapes.

“A few trees were taken down to build the house” he said, “but they did not want the house to be baking in the sun.”

A series of connected buildings

The solution involved a 1,700-square-foot house divided into small “pods” linked by screened porches. Leaving the house shaded by surrounding pine and oak trees,  Winkelman  designated a south-facing clearing behind as the site of a power center. There, a shed topped by a movable solar array houses a bank of 12-volt batteries, an inverter, and a propane-powered generator that operates when the solar system is depleted. Underground cables carry the electricity to the house.

The sections of the house are sheathed in western red cedar shakes stained a gray-brown color to blend in with the trees. The slanted roofs, which recall the humble Maine camps that inspired the design, are open to views of the surrounding woods and water. Huge windows and skylights flood the interior with light.

“You have to develop a plan that solves issues of massing and siting,” Winkelman said. “These pods reduce the mass of the house, and they allow it to blend into its surroundings.”

Melissa Andrews, a staff architect in Winkelman’s firm, managed the project; while Winkelman developed the concepts, she drew finished plans and worked with Banks’s firm throughout the year-long construction.

Making use of all the “bits”

To frame the house, Banks used a precious resource: Southern long leaf pine timbers that had once been the bones of a long-defunct Maine paper mill. The exposed ceiling timbers of the Wood Island house are a beautiful and dramatic part of the interior.

“It is stunning, warm honey gold wood, and because it’s old-growth, has a very tight grain,” Banks said. “We got 10" by 10" timbers and sawed them to fit. From the smaller pieces left over from the framing, we built the cabinets. We weren’t sure how much we would need, and we used every bit.”

Some of the last bits were used to build a dining table. Built-ins, too, were fashioned from scraps of the heart pine timbers.

For the flooring, Banks used boards sawn from a large red oak tree that was cut to make room for the house.

“The oak was baked in a kiln without oxygen, which petrifies it and makes it darker. It is known as torrefied oak,” Winkelman explained.

Banks and his crew brought a portable sawmill out to the site on their barge and used it to mill the oak on site.

The front door of the main section leads into a screened porch, as befits a classic Maine camp. One passageway  leads into the public side of the house, including the kitchen, pantry, living room and dining room, which opens to the outdoors via another screened porch that can be closed off from the elements with big folding glass panels.

“In the summer, it’s one big screened porch with a dining table and comfortable seating furniture,” Winkelman said.

The other passage from the main porch leads into the bedroom pod, which includes, on the first floor, a mudroom, storage, and a guest bedroom lined with oak from the site. A stair hall leads to a bathroom on the landing, its shower wall composed of recycled slate. Upstairs, a loft houses the master bedroom.

An additional half bath is near the kitchen and the entry porch.

Outdoor shingles have been used inside to create the rustic atmosphere desired by the homeowners.

The Wood Island camp has proved far more popular than anyone expected.

“This was to be a summer camp, but they learned that they love to go out there in the winter,” Winkelman said. Which makes the house’s open-or-closed indoor-outdoor design, as well as its energy independence, a very good thing. 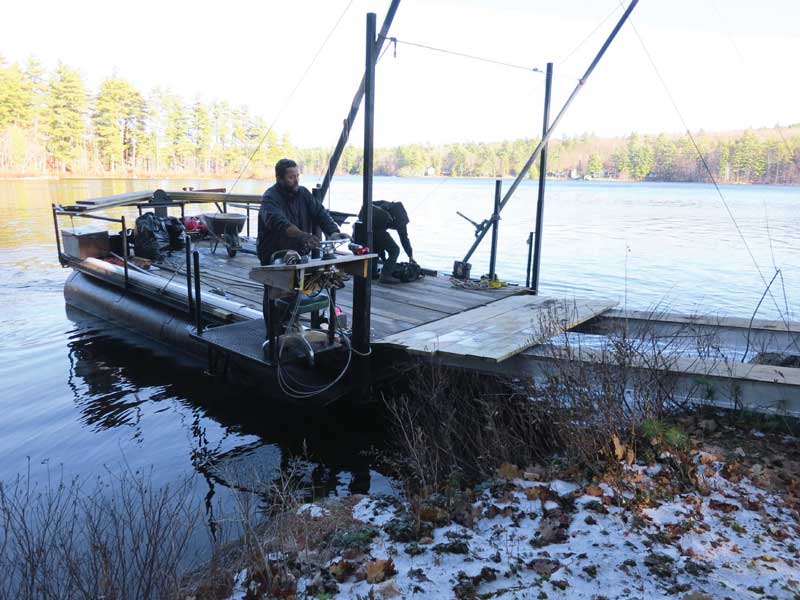 First they had to build a barge

“Sure, in the winter you can walk to the island across the ice, pulling a sled with supplies,” builder Henry Banks said. “But this building project took a year, so we had to get tools and people and materials out there during the open-water months, too.”

For all-season access, he built a barge from the frame of a pontoon boat.

“I stripped it of excess junk,” he explained. “Then I used eight by eight timbers sawn in thirds and put them on with steel braces. Then I put on thick planks so the whole thing could take the weight of a one-ton pickup.”

The barge is powered by a 50-hp outboard.

“It’s not super powered, but with all that equipment on board, you can’t go at high speeds. We’d make our way out there at about five or six miles per hour, one trip out in the morning and one trip back at the end of the day. It forces you to be organized,” Banks said.

The Wood Island house is long finished, but Banks still has the barge.

“I’ve used it again, and was glad to have it,” he said. “But now, I can’t really justify hanging on to it, so I’m going to sell it.” He sounded regretful.  —RC