This Yard Specializes in Classic Lymans 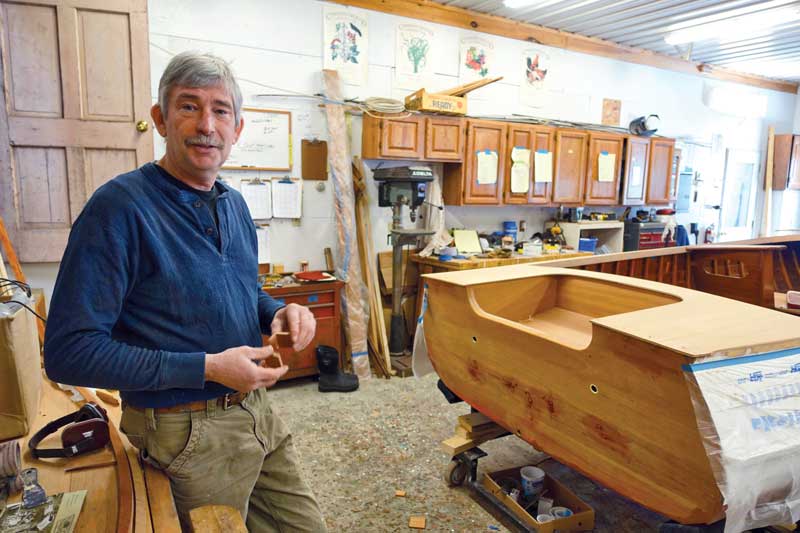 Chris Cushman, shown here in his workshop, was building houses when he got tired of the business and decided to go into the wooden boat business. Based in Wayne, Maine, Androscoggin Wooden Boat Works specializes in vintage wooden boats, most particularly Lymans.

Well off the beaten path and tucked away amid a dozen or so nearby lakes, Androscoggin Wooden Boat Works is the bait that captures all things Lyman. “We love working on these boats,” said the yard’s founder, Chris Cushman. “If that was all we did, that would be okay with me.”

The shop does work on other wooden boats, including classic mahogany runabouts, vintage sailboats (recent jobs involved the complete rebuilds of a 1938 Lightning and a 1940s A.R. True Rocket). The yard also stores and maintains boats. But Lymans are the stars of the show.

Nestled amid the heavily-forested back roads of the inland town of Wayne, Cushman’s boatyard last winter contained dozens of Lyman powerboats stored in several sheds. In the central building, a five-person crew worked on four different Lymans in various stages of reconstruction. Since 1995, Cushman estimated that he’s restored no less than 150 Lyman runabouts, cruisers, and utility skiffs, some for customers as far away as London, England, and some just on a hunch he’ll eventually find a buyer for an old wooden boat that was once one of the most sought-after brands of its day. 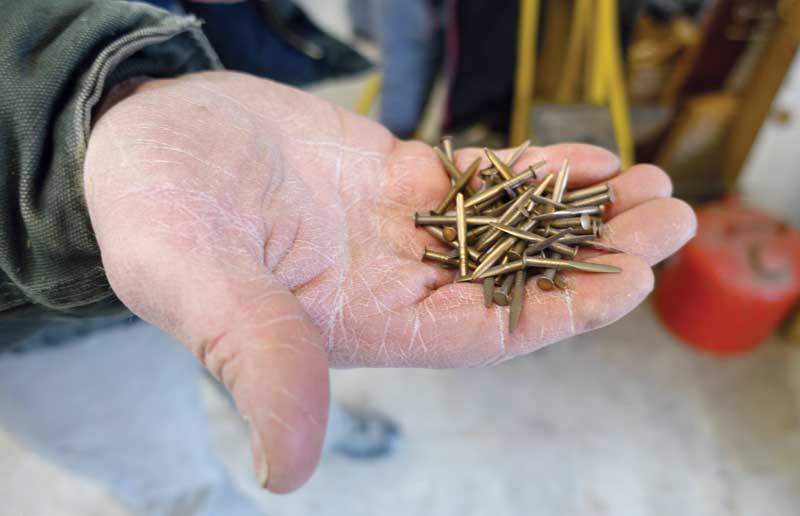 Cushman holds some of the bronze clinch nails that he has custom made to replicate the ones used by the Lyman Company.

The Lyman styles, pricing, availability, and reputation for reliability and performance made the company’s boats the nautical equivalent of Fords and Chevys in the 1950s and 1960s. To meet the demand for these boats, it’s been estimated that the Lyman Boat Works of Sandusky, Ohio, produced some 3,000 boats every year in the mid-20th century decades, sometimes as many as 5,000. All were made of wood, with distinctive lapped planking and triangular side windows. Ranging in size during those peak production years from mostly 13 to 25 feet, many of the boats were sold before they even came off the assembly line. Bigger and smaller Lymans were also produced. But that mid-range size was what built the company’s enduring reputation.

It all began in Cleveland, Ohio, in the late 1800s when a German immigrant named Bernard Lyman lost interest in his primary occupation of making cabinets and furniture. For reasons concealed in the mists of history, he turned to boats for a new woodworking challenge. He constructed a large rowboat using the standard northern-European lapstrake style of overlapping the plank edges like clapboards on a house. The off-beat style became his boatbuilding signature, along with a reputation for designs that worked well on lakes, both big and small. By 1928, the company had outgrown its Cleveland facility and moved to nearby Sandusky, with orders galore in hand. 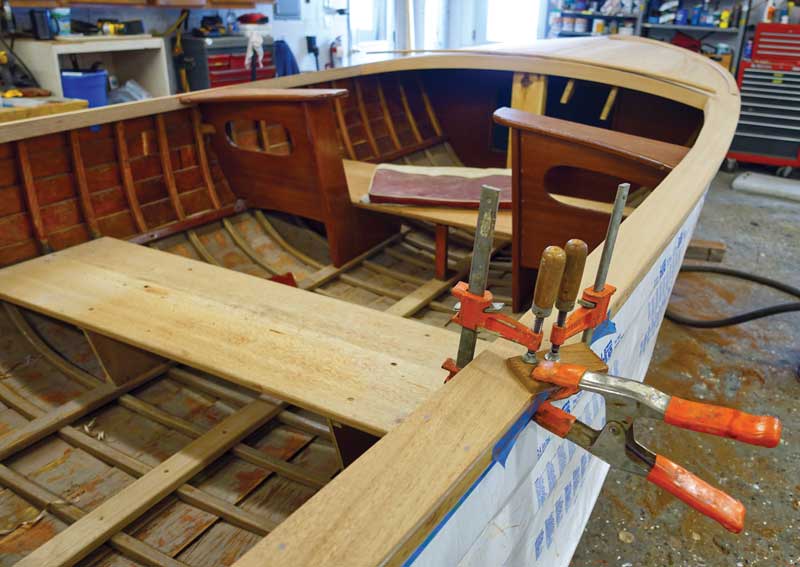 A current project in the shop is a rebuild of this 1957 16' Lyman with newly installed ribbon mahogany decks and transom.

A house builder who switched to boats

Similarly, Cushman’s affair with wooden boats also grew out of frustration with his first woodworking occupation, that of building and repairing houses near his home town of Wayne. Complete with crews of carpenters and various subcontractors, Cushman’s first business rode a mini-housing boom from the late 1980s through the early 1990s.

“I just got tired of all the hassles,” Cushman, now in his mid-50s, recalled of the quirky housing business. Living amid so many lakes, he was already aware of the Lyman reputation, so finding an old junker and fixing it up for resale was easy enough. “And you can still do that,” he noted. “That’s where a lot of our business comes from these days.” 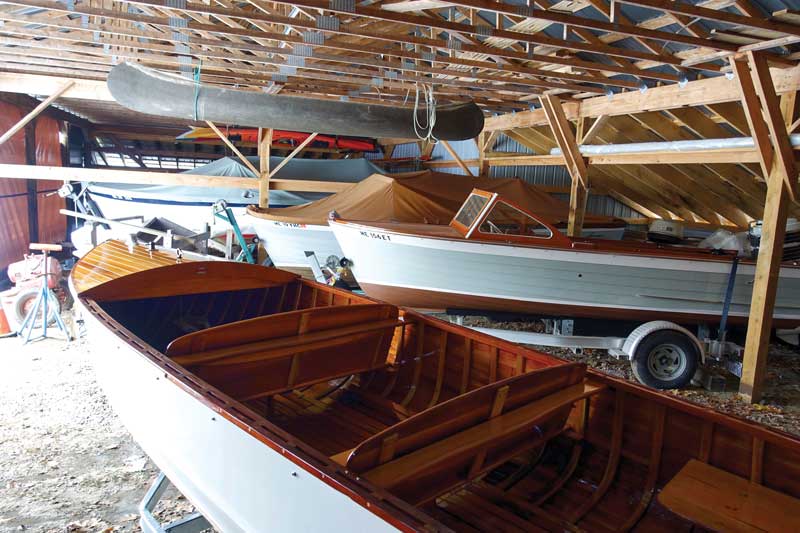 Cushman has filled the sheds on his property as well as neighboring barns with vintage boats, some in need of restoration, others stored for customers. In the foreground is a completely restored 1955 18' Old Town “Sea Model.”

Of course, Cushman couldn’t limit Androscoggin Wooden Boat Works to only Lymans, nor even just wooden boats. “We would take on almost anything,” he recalled of the early days—the “we” in this case being mostly himself and perhaps one part-time helper. To keep costs down, he lived in a house he built a hundred yards or so from the yard’s working sheds and shop. He still lives there today with his partner, Leslie. The devotion to his work slowly but surely built his reputation as “the Maine Lyman guy,” a moniker common amid blogging Lyman enthusiasts coast-to-coast. “I’ve never really advertised,” he said. “But people do find me.”

Actually, even though finding Androscoggin Wooden Boat Works, in the literal sense, takes a bit of an effort, most Lyman enthusiasts find the trek worthwhile. In the restoration shop, the walls are lined with all sorts of jigs, patterns, and prototypes that Cushman and his crew have built specific to the Lyman brand.

“We can work faster and sometimes cheaper than the average do-it-yourself guy,” Cushman said. The experience and tooling he and his crew possess can make short work of most projects, he said, in particular, the most common Lyman failure: the keel and bilge planks.

Typically, rainwater, leaves, forgotten potato chips, and lots of other detritus gathers in the boat’s lowest point and eventually rots the wooden parts. Although there are gooey and epoxy-based “quick fixes” to this and other common Lyman maladies, Cushman insists on restoring boats in what he calls “the right way.” That means out with the old and questionable wooden parts and in with new, marine-grade sapele plywood planking and white oak ribs and keel, along with bronze nails specially made for his yard. Indeed, it’s a point of pride that the yard has paints, stains, plywood, and other Lyman-specific items made solely for Cushman’s business. His goal is to restore any boat to as-close-to-original condition as possible. He even buys a certain type of ribbon-striped mahogany in veneer form so he can convert standard marine-grade plywood to the handsome Lyman transoms of yore. That rare ribbon-striping of the wood’s grain was a hallmark of Lymans in the post-World War II days. 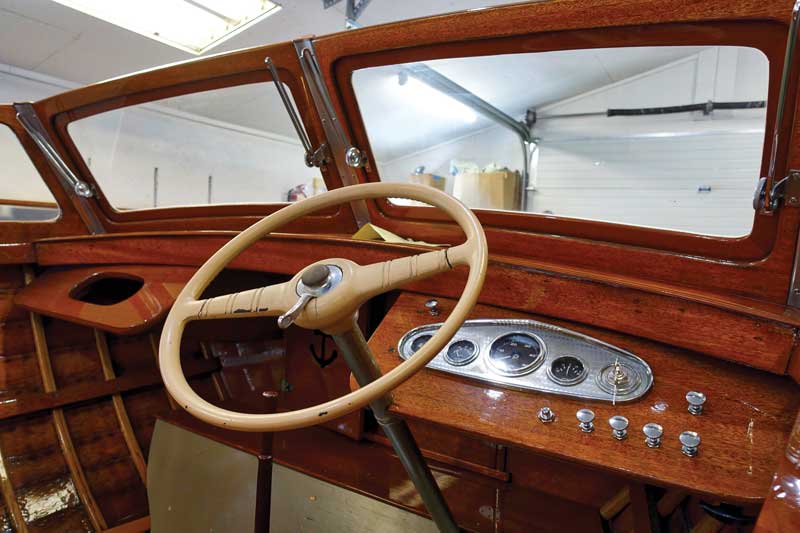 The restoration of this 1960 19' Lyman included new white oak frames, new decks, a new engine, and refinishing. The boat, now as good as new, will live in Lake Winnipesaukee.

“We have done quite a few major rebuilds that were almost new boats when we were done, (with) over 90 percent wood replacement,” Cushman said.

Prior to World War II, Lymans were made from solid wood, with either cypress, cedar, or mahogany planking, along with white oak ribs, keel, and stem. Later the company used plywood planking. Normally a soft-spoken, steady worker, Cushman gets noticeably excited about a pre-war restoration. “I’m actually off to pick up a 1934 15-foot Lyman inboard yacht tender this coming weekend,” he shared recently. “Interesting and rare boat,” he added with marked anticipation.

About the only Lymans that the Androscoggin staff doesn’t work on are the fiberglass versions. Before Lyman went out of business in the mid-1970s, the company attempted to catch up with the rapidly-expanding fiberglass boat business. But it was too little, too late.

“We have had large fiberglass (Lyman) boats come for mostly mechanical work and teak trim refinish,” Cushman said, adding “we prefer not to do fiberglass work. Any major fiberglass work we will send out.”

How long can interest in these 60-year-old wooden boats continue? Cushman did not have an answer. He just shrugged, picked up his tape measure and went back to work on a plank he was cutting for yet another restoration.

Androscoggin Wooden Boat Works has been hosting the New England Lyman Group for an annual open house for 18 years. This year’s event took place in late April. More information can be found on the company’s website.