A fascinating tale of early Maine 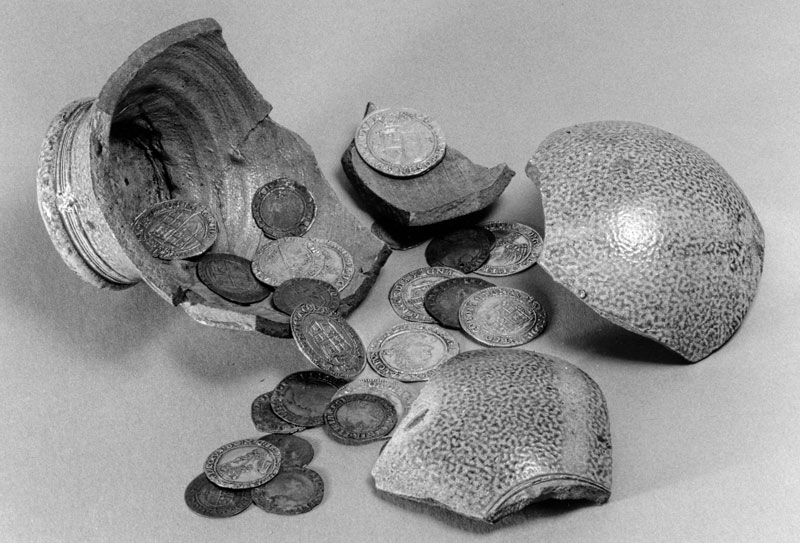 The Richmond Island coins, shown here, were found stored in this salt-glazed stoneware jug, which likely was made in Germany. In the early 1600s such jugs were commonly used to store liquids. Collections of Maine Historical Society 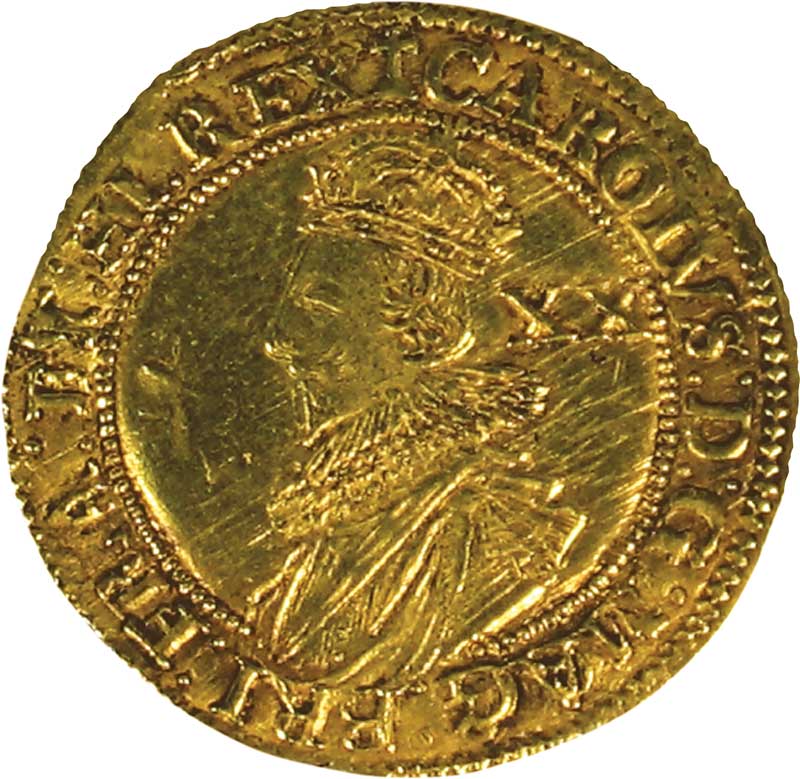 The cache included this British unite or 20-shilling coin, which bears an image of King Charles I, with the words “CAROLVS.D.G.MAG.BRI.FRA.ET.RI.REX” (Charles by the grace of God, King of England). Collections of Maine Historical Society On May 11, 1855, a small treasure—literally a pot of gold—was found on Richmond Island in Casco Bay. The “pot” was a broken, quart-sized stoneware rum jug like those often found by archaeologists at colonial sites. Inside were 21 gold coins and 31 of silver that in today’s money likely far exceeded $5,000 in face value.

The pot, which was plowed up near the center of the 200-acre island by a farmer and his 12-year-old son, is thought to have been stashed by Walter Bagnall, an early settler and trader who was killed by Indians in 1631.

The story of Bagnall and Richmond Island is a fascinating tale of early Maine.

Popular history tells the story of Pilgrims and Puritans arriving as tight-knit groups to face the challenge of founding new colonies. Tales of their tribulations usually revolve around relationships with local tribes. A more accurate story would be of New England as the “wild west,” because that is literally what it was to these Europeans who sailed westward from Europe to a frontier filled with strange native peoples. The new arrivals included all manner of opportunists ranging from Protestants to Catholics, Englishmen to Frenchmen, fishermen to fur traders, political operators to rogues and pirates. For the first several decades of European settlement in North America, these fellow Europeans caused more trouble for each other than did the Native Americans.

Unlike the Pilgrims and Puritans of Massachusetts, religious radicals who came in closely-knit groups, the first English settlers to arrive in Maine were a motley lot. The region had been claimed, but not actively colonized, by both the French and the English. The French explorer Samuel de Champlain, and Captain John Smith, an English adventurer, were among this region’s better-known early visitors. They left accounts of their travels that are still the basis for our historical understanding of Maine’s earliest colonial times. 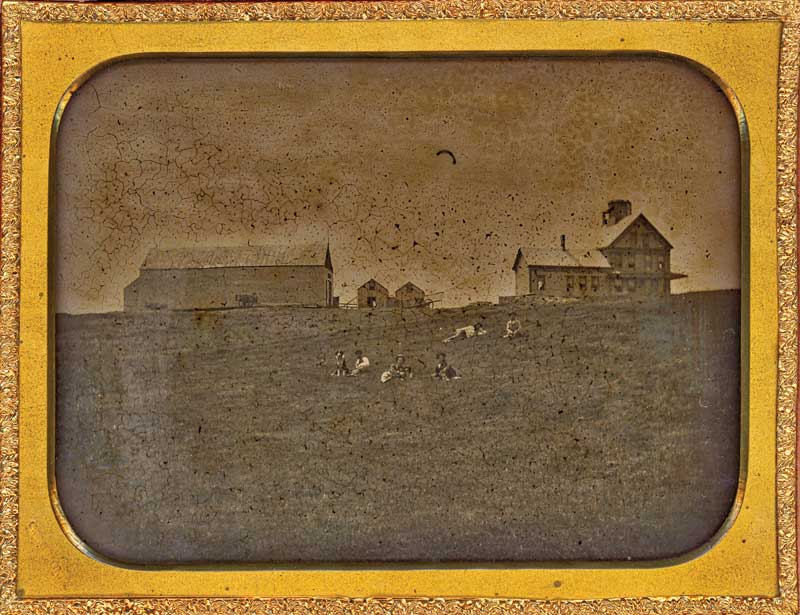 This ambrotype shows the large farmhouse, barn, and outbuildings of the John Moreland Cummings farm on Richmond Island in the mid 1800s where a farmer and his son plowed up the Bagnall coin hoard in 1855. The house later burned. (Detail) Collections of Maine Historical Society

Champlain and the Micmacs

Champlain came as a member of a royal expedition led by Sieur de Monts, whose name is memorialized by Sieur de Monts Springs on Mt. Desert Island. The de Monts expedition sailed through the Casco Bay area in 1607. Champlain described the natives he met there as agricultural people who were culturally different from the hunter-gatherer Indians he had met farther east in what is now Nova Scotia, New Brunswick, and eastern Maine. They were more similar to the people of Massachusetts, for whom he used the same name: “Armouchiquois.”

What Champlain didn’t (yet) know, however, was that the name Armouchiquois, which he had learned from his Micmac guides in Nova Scotia, actually was an epithet that meant “dog people.” The Micmacs had been at war with these and other Indians in the Maine region and had no love for them. Oddly, the cultural distinctions Champlain observed in his travels were lost on Smith, who considered all the Indians of the New England region to be culturally indistinguishable.

Unfortunately for the natives, the arrival of Europeans meant not only the possibility to obtain irresistible manufactured goods like cloth and metal, but also the certainty of disastrous Old World diseases. In 1616, only a few years after Smith departed the area, a devastating epidemic swept through the indigenous populations of New England. There is little doubt that its cause was some Old World disease brought, according to one account, by a sailor aboard a French vessel off Massachusetts’ shores. The outbreak fits the classic pattern of a “virgin soil epidemic,” the kind of acute outbreak that spread many places in the New World colonized by Europeans. Many of these diseases originated among Old World domestic animals. Europeans had developed immunities to them so that some, at least, survived the outbreaks. Indigenous Americans, on the other hand, had virtually no domestic animals except dogs, and so had never developed such diseases, or resistance to them.

The still-unidentified malady, which came to be known as “the Indian disease,” is estimated to have killed between 30 and 90 percent of the native population from at least as far south as Plymouth and northeast at least to Penobscot Bay. It may have spread farther, but we have no historic accounts to confirm that. The symptoms recorded don’t correspond well to the etiology of known European diseases, which is often the case with virgin soil epidemics. Recent scholarship suggests that it may have been leptospirosis complicated by Weil syndrome—we probably will never know for sure.

We also know little about the epidemic’s impact in the Casco Bay area, where the pot of gold was found. It was generally thought to have been more severe among agricultural people who lived there in densely-populated villages, than among the more sparsely settled hunter-gatherers to the east, who lived in smaller mobile family groups. In any case, after the epidemic, the term Armouchiquois disappeared completely from the historical record, and there is evidence that suggests the Casco Bay area itself may have been entirely depopulated.

This epidemic certainly cleared the way for the Pilgrims who arrived at Plymouth in 1620, as well as the Puritans, who arrived at Massachusetts Bay a decade later. Other early arrivals in Massachusetts included a freewheeling group led by Thomas Morton, who came in 1624 with 30 indentured servants to settle at Passonagessit (now Mount Wallaston in Quincy). They named their settlement Merrymount. Morton, whom historian Charles Francis Adams called the “Free-liver of Merrymount,” and his fellow colonists raised the ire of Plymouth by, among other things, living a libertine lifestyle, even raising up a May Pole, which Pilgrims associated with idolatry. More seriously, however, they were accused of selling firearms to the local Indians.

By 1627, the religious colonists had had enough of Merrymount. Plymouth Capt. Miles Standish was sent up to arrest Morton who was marooned on the Isles of Shoals. From there Morton hitchhiked passage on a ship back to England, but returned in 1629, and was once again arrested, this time by Puritans, who burned Merrymount, forcing its population to scatter.

Among the diaspora from Weston’s Merrymount was one Walter Bagnall, known as Great Watt. Bagnall soon turned up at Richmond Island and set himself up in the fur trade with local Indians. Plymouth officials considered Bagnall among the “worst of the [Merrymount] company.” Puritan leader John Winthrop described him as “a wicked fellow [who] had much wronged the Indians,” and said that he had amassed a fortune worth 400 pounds, by cheating the natives. Native tolerance of Bagnall ran out on October 3, 1631, when he and his servant, John Peverly, were murdered by Indians, including a local Sagamore named Scitterygussett. The Indians burned the trading post and plundered Bagnall’s hoard—they apparently did not find the stashed pot of coins.

Revenge for Bagnall’s murder was not acted upon until two years later, in January 1633, when a small fleet of pinnaces set out from Massachusetts, ostensibly to capture Maine’s famous pirate Dixie Bull. Because of cold weather, they landed instead at Richmond Island, where they found “Black Will” a friendly Indian from what is now Lynn, Massachusetts, and promptly hanged him in revenge for Bagnall’s death. Winthrop, who reported the incident, claims Black Will was among those who hanged Bagnall, but no other evidence exists to support this unlikely claim.

It is hard to make sense of this chaotic sequence of events on the Maine frontier in the early 1630s. Black Will, for example, who was also known as Duke William, sold Nahant to Thomas Dexter in 1631 for a mere suit of clothes, only to be hanged two years later by men who must have known who he was. Scitterygussett, on the other hand, the named killer of Bagnall, was never apprehended, and survived until 1670, by which time he had signed over multiple deeds to English settlers. Meanwhile, the pirate Dixie Bull had been an English navigator and fur trader in good standing until his vessel was captured by French freebooters at Castine in 1632. Instead of revenging himself on the French, however, he turned upon fatter English targets, including the trading post of Abraham Shurte at Pemaquid, which he raided in 1632. Bull was never captured, and his ultimate fate is unknown, although some sources claim he switched allegiance to the French.

Economic affairs were no less uncertain, even when official licenses were involved. The next occupants of Richmond Island, for example, were fishermen working for English merchant Robert Trelawny who, on December 1, 1631, received a grant of land at Casco Bay, including Richmond Island. His agent, John Winter, arrived in early March 1632, only to discover that another English vessel had taken down the timber pier, preventing Winter from beginning the fishing season.

After a prosperous start the next year, overfishing soon sent the Trelawny operation into decline, as fish landings dropped year after year despite the addition of ever more fishing vessels to the fleet. This decline was an early and localized example of overfishing in Maine.

Finally, we come to those coins

Among all this uncertainty, “Great Watt” Bagnall somehow was able to establish himself in the local fur trade and to accumulate the wealth represented not only by his material goods but also by the Richmond Island pot of gold.

Coinage was so scarce on the early New England frontier that, beginning in the 1630s, colonists used a kind of Indian shell bead known as wampum as a substitute. The hoard thus suggests a few things about Bagnall, among them that Winthrop was correct about his sharp business practices. It also suggests that coinage may have been available mainly to those involved in exporting raw materials like furs and fish to European markets, for which they could demand cash payment.

The Richmond Island treasure trove was plowed up in May 1855, having lain about a foot below the surface, near traces of a building, most likely the remains of Bagnall’s post. The pot must have been broken when buried because the coins it contained were nested neatly in their original positions at the bottom. They date to the reigns of three English monarchs, Elizabeth I (1558-1603), King James I (1603-1625), and King Charles I (1600-1649). As only two coins date to the reign of Charles, the ages of the coins are just what we would expect in a hoard accumulated by Bagnall. A wedding signet ring bearing the initials G. V. was also found in the pot. The Richmond Island hoard is now in the collections of the Maine Historical Society.

Bruce Bourque is Senior Archaeologist, emeritus, at the Maine State Museum and Senior Lecturer in Anthropology, emeritus, at Bates College. His archaeological research focuses upon the Gulf of Maine coast.