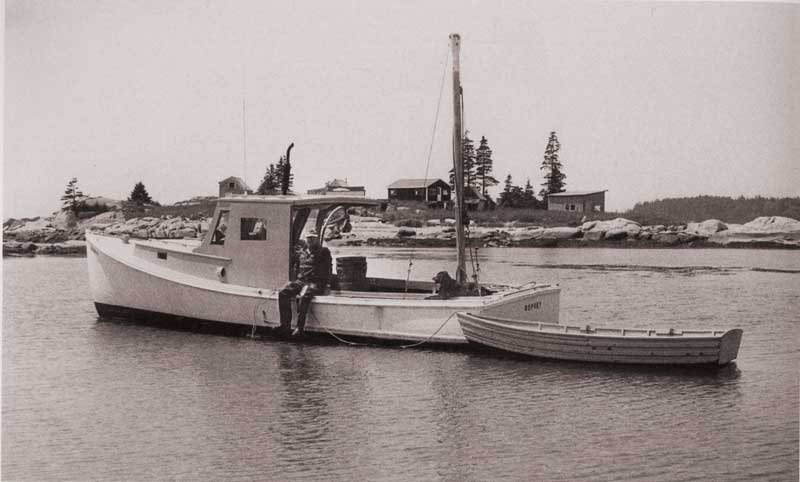 The author’s father Gordon Simmons sits on the side of Osprey after hauling his traps. Photo courtesy the author

As the bow of the lobsterboat Osprey broke through the fog that hung over Mussel Ridge Channel, I rose from my comfy spot against our rolled up sleeping bags on the dock where my friend John and I had been waiting for more than an hour for my father to take us to Pleasant Island.

John didn’t think any sane person would come across the channel in this fog. I was beginning to have my doubts.

Earlier that morning, I had made a pot of pea soup to take with us on this foggy June day. It would hit the spot when we got on the island. I envisioned a nice warm fire going in my grandmother’s old camp and my soup bubbling away on the stove.

John, who later became my husband, hadn’t met my father yet. Daddy was such a character; there wasn’t any way I could have prepared him. I had dragged John to the boatyard, protesting and complaining all the way. He didn’t believe anyone was coming for us. He didn’t know my father, though.

Staring into the fog, I finally heard the faint, then unmistakable chug of a motor. The familiar noise grew louder as the unmufflered engine clanged and throbbed its way into Lobster Cove. Osprey’s high proud bow pushed against the sea as it slowly made its way toward the dock, and I could practically hear the sigh of her boney old hull settling into the water next to us.

The gray paint was peeling and blistering around the windows, one of which was cracked, but the house was still straight and erect like the lady she’d been when she was new and Daddy had taken her down the skids at Mackinen Bros on the Weskeag River. Smashed crabs and sea urchins still clung to the metal rim around the gunwales. I could see he hadn’t stopped to clean up but had come straight from hauling his traps.

My heart ached with pity and pride when I saw him, dressed in his yellow slicker stained with hard work and garbage of the sea. Liquid fog dripped from his Sou’wester, and when he dipped his head to tie up, water ran from the brim onto his reddened hands, now swollen with arthritis. I swallowed the lump in my throat, admitting to myself that he was looking older and a little more frail than I’d remembered. His shoulders, once wide and strong, were thinner and stooped. But he was still a tough guy, full of confidence on his own territory, moving about his boat with no hesitation, every move quick and sure as though he’d done it hundreds of times, and he had.

He looked up, smiled at us, and took off his thick glasses to wipe them. The scene was so familiar to me that suddenly I was 10 years old again, and going to Pleasant Island on Daddy’s boat. I’d been living away from Maine for a long time. It was good to be back.

John smiled politely, not knowing what to expect. He was “from away,” a flatlander from England. He knew my father was a lobster fisherman and had been looking forward to meeting him, but now seemed bewildered by everything.

“Good.” He was a man of few words, unless he’d been drinking.

Today, he looked happy. I had known he would come and get us, no matter how thick the fog.

He wasn’t afraid of anything. He’d been on the water since he was 13 in the 1920s when he and his father went out to the Seal Islands to fish summers. They’d left the mainland and the rest of the family behind, while he (the oldest) went with his father to lobster out there and keep the family from starving. They did well, but life was tougher—harsh weather, hard work, and little to eat but salt fish and pork scraps. He often told us stories of catching fish by hand line, and once fending off a shark when he climbed down into the water to untangle his lines. I can imagine how lonely it must have been for a young boy, alone with his father, and no one else to talk to. But I’m also sure, from what I’ve heard about Grandpa Simmons, that he was a kind man and probably the best influence my father could have had.

Back at the dock, John looked at my father in amazement. “How did you find your way in this fog? I can’t believe it!”

“Well, I got my compass, and I’ve been this way a couple of times.”

He gave John a bashful smile and stuck out his hand. John just stared. The thumb and forefinger were missing, making it as misshapen as an old lobster claw.

“What happened to your poor hand?”

John looked stunned. He started to say something, then stopped and looked at me.

“Should I ask what happened?”

We picked up our bags and climbed down the steep and slippery ladder to the Osprey. The familiar odor of fresh lobsters and old bait hung in the air. John coughed discretely and looked around for a clean dry place to store our stuff. He settled our bags on top of an old wooden crate in the stern, after brushing off pieces of crab legs.

In spite of my father’s fishy smell, I moved up beside him, behind the wheel, and gave him a hug.

During the 20-minute ride across the channel, no one spoke for awhile. It would have been useless anyway, the engine was so loud. My father was half deaf, probably from years of standing next to that engine. He stared hard through the hatch window, which was held open with a nail and a piece of string, watching for other boats. In the middle of the channel we could hear the gong buoy. This was the most dangerous part, as other boats could be passing across our bow. Daddy handed me the horn can and told me to squeeze it every few minutes. Each time I did, John jumped so high I expected him to go overboard.

Once Daddy turned around and said something to him. “What’d he say?” John asked.

He couldn’t be heard over the engine, and the toothpick he was chewing on (since he quit smoking in 1954) didn’t make it any easier.

I continued watching through a fog so thick that my eyelashes were dripping. I knew we should be seeing something soon. The ghostly tops of spruce trees appeared, as if floating in the air. We passed slowly between the outcrops of Flag and Bar islands. The outline of high granite ledges, half dressed in seaweed, rose beside us.

As we passed through what the fishermen call “the hole in the rocks,” John and I moved closer to my father just in time to see a wide sandy beach appear in front of us. He cut the motor as he picked up the gaff with his other hand, catching a mooring buoy in one smooth move.

“We’re here,” I hollered and began to gather up our gear.

“Are you sure we’re in the right place? I couldn’t see a thing coming in.”

I looked at John.  “Trust me!” I started to throw things into the dinghy.

“Shouldn’t we do something to help your father first?”

We watched as Daddy stepped easily onto his washboard, made his way around the house and up to the bow. He reached down with his gaff and pulled the mooring chain up and around the bit.

“Yup,” I said as I lifted myself up and into the dinghy. “Get out of his way!”