Warren Wilmot takes Gosling out for a spin. A skilled boatwright, he worked more than five years restoring the boat, which has been in his wife’s family for three generations.

Sometimes an old boat, however rickety and rotten, is just too lovely and historic to let die. That’s the case with Gosling, a launch built in 1948 that has spent an entire career working on Casco Bay. After a five-year rebuild, the classy wooden boat returned to the water last summer, turning heads wherever she went.

The quintessential wooden Maine workboat, Gosling has a high, wave-cleaving bow and graceful sweeping sheerlines that meet the tumblehome stern, and was built to sturdy specs by Albert Barrett from East Boothbay in 1948. The boat appears to be in the same gene pool as those designed by Will Frost from Jonesport and Beals Island, and while intended as a relatively affordable and seaworthy boat for coastal waters, the lines are nevertheless unforgettably graceful.

Framed with oak and planked with clear pine, Gosling was originally powered by a marinized gas-burning International tractor engine. The boat had a bronze steering wheel with Columbia worm-gear steering and a basic gauge panel—nice and simple. A little over 28 feet long overall, the launch has a large open deck and a tent-type canvas spray hood stretching from the bow back to the steering post. Not fancy and not fast, Gosling cruises comfortably and feels right at 10-12 knots. The wooden hull provides for a dry and stable platform with an easy-on-the-knees motion in a sea. And, the nearly flat wake while under way speaks to the efficient bottom configuration. 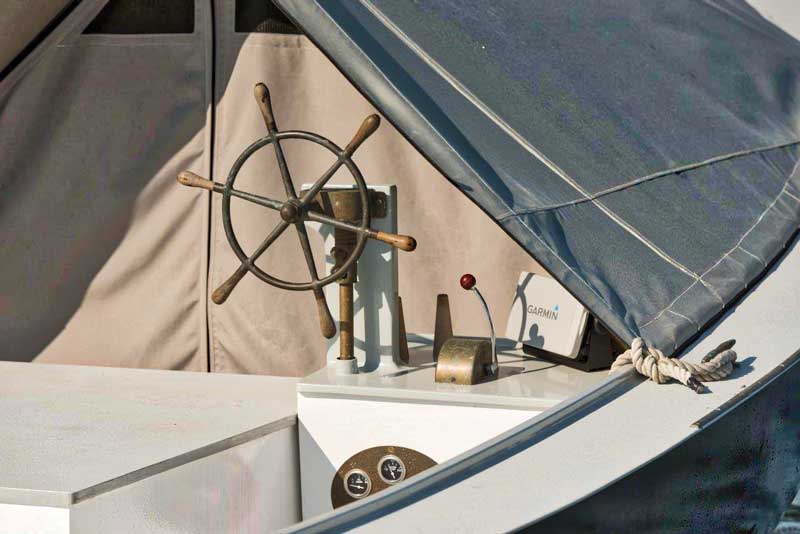 The original steering station and controls were kept in the restoration.

Gosling was originally owned by the Hildreth family and later by the Soule family. Over the years, she hailed from the Falmouth, Yarmouth, and Freeport anchorages. Gosling was primarily a utility boat, shipping family, friends, and supplies to their favorite gunkholes and their island cottages, as well as just cruising the famed blue-green waters of Casco Bay. She never carried a stack of lobster traps on deck but once did a stint as a yacht club launch. Seven decades of use have made Gosling a familiar sight on the bay.

When Gosling was not on Casco Bay, the launch was on the hard. Between the waves of summer and the ravages of rainwater, drying out, and collecting homeless field mice during the winters for 71 years, the launch began to show her age. Rot, peeling paint, marginal mechanicals, and structural issues compromised her sea keeping ability. The hull had begun to corkscrew stern to bow, and daylight leaked through the planks in places. The boat was well beyond a face-lift and was at the point where a fiery Viking funeral (minus a Viking) might have been the most respectful goodbye.

As fate and love would have it, a fellow named Warren Wilmot married into the Soule family, owners of Gosling for three generations. Gosling was passed along to third-generation daughter Ursula (Soule) Wilmot and husband Warren in 2008. After years of patching and praying, a decision had to be made. Wilmot is a patient man with a keen eye for boats, particularly traditional Maine hulls. He also is a skilled boatwright at Strouts Point Wharf Company (coincidentally, the original Soule family shipyard) in South Freeport. Since today’s price for such a craft would easily exceed $100,000, it was decided that the worn and sea-tired Gosling should and could be brought back to Bristol condition. Wilmot’s talented boatyard buddies offered some reserved and sage advice: “Hmmmm.” As luck would have it, he did not know then that it would take him five and a half years of early mornings, late nights, and weekends to complete the restoration. 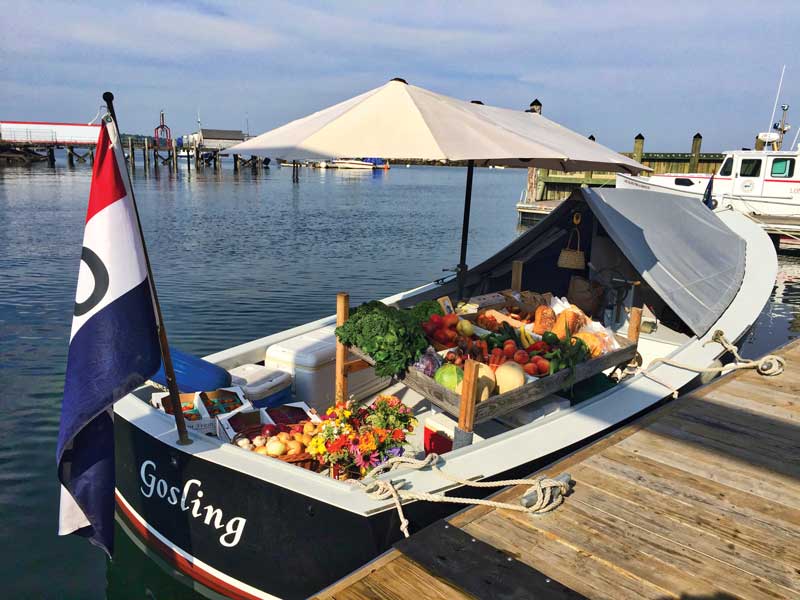 In addition to using her for outings, the Wilmot family has turned Gosling into a farmers’ market, delivering produce to several Casco Bay islands during the summer. Photo courtesy the Wilmot family

In 2013, Gosling was hoisted onto adjustable boat stands and slowly jacked, clamped, and bullied back to her original shape. Noted marine architect and mean banjo player Al Spalding helped Wilmot take the lines off Gosling while adjusting for imperfections. She was then flipped over and the original pine planks were faired or replaced as necessary. Next, the hull was cold molded—thin diagonal strips of Philippine mahogany wetted with epoxy resins were applied diagonally over the pine planking and fastened. The punky skeg was rebuilt and sealed to the hull and the shaft log was then bored and fitted with a fiberglass tube. The hull was now waterproof, stiffened, and likely stronger than the original.

Gosling was rotated again to be right side up. Sister ribs were added as necessary, and the interior of the pine planks was soaked with a mix of linseed oil and turpentine. It has been said that concoction smells so good that some of the old-timey boatbuilders wore it like cologne, especially to bean suppers at the church and launchings. (It is also possible that may not be true.) A lightly used Chrysler 380 gas engine was carefully mounted on new timbers and dual underwater exhausts were installed; the new engine produces the perfect sound combination of deep, hollow burble and rumble. Finally, a spacious watertight deck with scuppers was put in place with a step down forward of the steering post to the sheltered area under the spray cover. The original hardware was then reinstalled.

In addition to historic sea duties, the Wilmot family has turned Gosling into a floating farmers’ market. On Saturday mornings throughout the summer, the spacious deck becomes a colorful bazaar of fresh vegetables, baked goods, meats, cheeses, eggs, jams, an array of flowers, and more. Provisioned and crewed by the Wilmot family, Gosling heads down the bay to visit Bustins, Chebeague, Cliff, and Long islands where there is always an excited crowd of year-rounders and summercators waiting dockside, canvas grocery bags in hand. Please tell me, how does grocery shopping get any better than this?

If all goes well, Gosling will be 100 years old in 2048. At that point, the owners will be in their 60s and the children will be in their 30s. They will probably continue to trade back and forth to the islands of Casco Bay; it’s part of their heritage. Wilmot likes messing around in boats and all of the family has a little salt water in their veins. As well, most hard-core wooden boat owners firmly believe that the only boat that could be better than a traditional 71-year-old Maine-built boat is a 100-year-old traditional Maine-built boat. Gosling is a family jewel—one that’s now in good enough shape to be passed along to the fourth generation one day.

Bob Knecht is a broker at Town & Shore Real Estate in Portland.