Off the Drawing Board 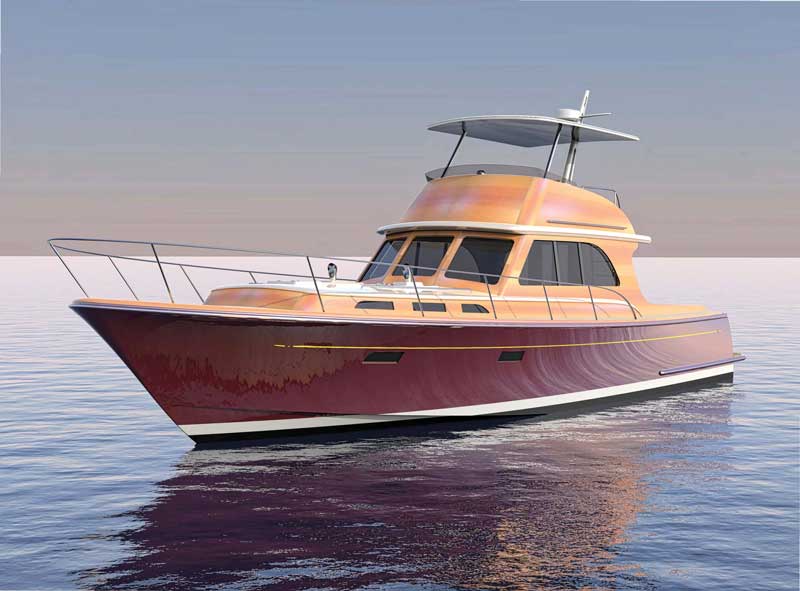 For generations, yacht designers from East Coast cities and sailing meccas have teamed up with yacht builders from Maine to produce excellent boats. In the last century, Ted Hood formed such a marriage of convenience with Cabot Lyman, founder of Lyman-Morse Boatbuilding in Thomaston. Together, they produced several first-rate custom cruising sailboats and a couple of limited-production models. Hood designed moderate-draft, bluewater sailboats that Lyman built to endure, good-as-new, practically forever.

Nowadays, powerboats are the thing; otherwise much remains the same. A current project involves Ted Hood’s nephew Chris Hood, a designer and founder of C.W. Hood Yachts in Marblehead; Cabot Lyman’s son Drew Lyman of Lyman-Morse Boatbuilding in Thomaston; and Stephens Waring Yacht Design of Belfast. They have collaborated to produce a spacious custom-designed powerboat.

Construction of the new boat began last December at Lyman-Morse. The vessel is expected to be finished for a 2020 delivery.

Not every yacht designer is humble enough to enlist the talents of another yacht designer, but a boat of this size requires an enormous design and engineering effort, so Chris Hood and designer David Robison became a shining exception and reached out to Stephens and Waring, who are known for their talents in that area. “It’s been great working with Bob (Stephens) and Paul (Waring). They are such nice guys and we are such nice guys, that it has really worked out,” Hood explained.

If you include the client, this one project involves five different entities. The client has strong ties to Boston’s North Shore, and is steeped in the downeast aesthetic. He’d owned other downeast-style boats and recently had a 24' boat refit at the Hood yard in Marblehead. So it’s no surprise that’s where he turned when considering a new boat. The charge for this new 57' boat was to create a high-performance vessel that brings classic lines together with modern design. 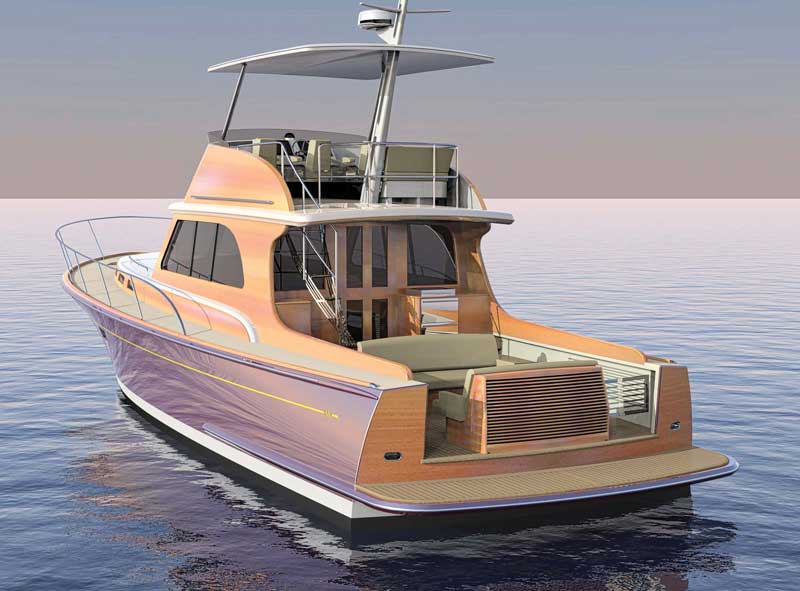 The custom yacht’s transom features twin doorways to a swim platform and a central ventilator box.

Chris Hood defined the concept. At first glance the new boat resembles a similar-sized downeast yacht; closer observation reveals its uniqueness. Priority is given to the cockpit, which means the deckhouse and flybridge sit relatively far forward. The low forward cabin is sleek. The strongly raked stem, wide forward flare, and hull shape borrow features common to all of Chris Hood’s offshore powerboats.

It was astounding to me that after Hood and Robison completed a finished outboard profile, with a preliminary lines plan and a weight study, they enlisted Stephens and Waring, and remained open to changes, including their aesthetic input. Both Bob Stephens and Paul Waring revealed that, as one might expect, the four designers engaged in some heated debates. According to Waring, who took his firm’s lead on this project, “I was very adamant that we strike a style and aesthetic balance between her hull shaping and above-deck architecture that speaks to a modernist twist on classic vernaculars.” In addition to cohesion in the design, he added, his goal was that custom solutions retain timeless appeal.

The result of the collaboration is an elegant, very pretty boat, that in my opinion would be nearly impossible to improve.

The “express classic” is intended for weekend cruising and entertaining.

Although Hood has ventured into sophisticated epoxy/carbon/foam methods of construction, he has always loved cold-molded wood. The designers quickly concluded that the boat should be built in Maine and primarily of wood/epoxy. But they also agreed that modern high-strength composites have their place, and specified that the four major shaped hull panels be built cold-molded of wood backed up with a chassis of tough composite girders.

“The mandate was to build a spacious yacht that would be extremely maneuverable and able to do 40 miles an hour” with two engines, Stephens said. This somewhat tall order suggested the use of twin Volvo Penta IPS 1350 pod drives. The engineers at the Volvo marine drive headquarters took a hard look at the hull and suggested some enhancements. Although glad for their penchant for perfection, Chris Hood called them, “The fussy old engineers from Sweden.”

One alteration suggested by Volvo consisted of adding a bit more area to the chine flats. There is so much thrust inherent with counter-rotating propellers, and almost limitless ability to turn the units sideways, that it is necessary to control how much a fast-moving hull is allowed to lean into a tight turn. The chines provide lift and thus stability while turning. It also was decided to add more beam to better distribute weight and enhance performance, as well as add more shape to the topside hull and deck line.

The Volvo variations resulted in an even a more spacious boat that still shows the familiar Hood styling.

The spacious floor plan includes a galley midship and a big stateroom.

The floor plan is creative. There’s a lot of elbow room throughout, especially in the forward owner’s suite. The shower room is large enough for Santa Claus. Both the stateroom head and the “day head” are commodious. The galley is neither up nor down, but located halfway, affording a nice bit of communion for the cook. There is a small extra guest or captain’s stateroom with a handy little office desk.

The combined wheelhouse and deckhouse sports two large built-in chairs and a mega-sofa. All the windows and the back door of the deckhouse can be made to disappear by dropping or sliding them. Combined with the spacious cockpit and bridge deck, roominess is the order of the day. There is also an aft cockpit complete with molded-in upholstered furniture, and the vessel will feature custom titanium hardware and a titanium spiral stair leading to the flybridge.

Hood pointed out that being a yacht yard owner, he prefers all-around easy access to boat engines. Waring designed the cockpit as a strong, but light, composite whole, capable of being propped aloft by means of hydraulic lifts to reveal the engines below. The stern is totally unprecedented in styling, both practical and distinctive. It features twin doorways down to a swim platform, and a central ventilator box. Taken as a whole, it’s one of the prettiest powerboat sterns I have ever seen.

There is a nifty forward cockpit in the bow. The yacht’s owner is an appreciator and collector of antique American automobiles, so the team created this feature to resemble—as closely as possible—a Model A rumble seat.

As to where the yacht’s name will be inscribed, that “problem” simply brings another opportunity for this convivial team to invent a creative solution. I can’t wait to see what the gang comes up with.