You Can Do It Yourself 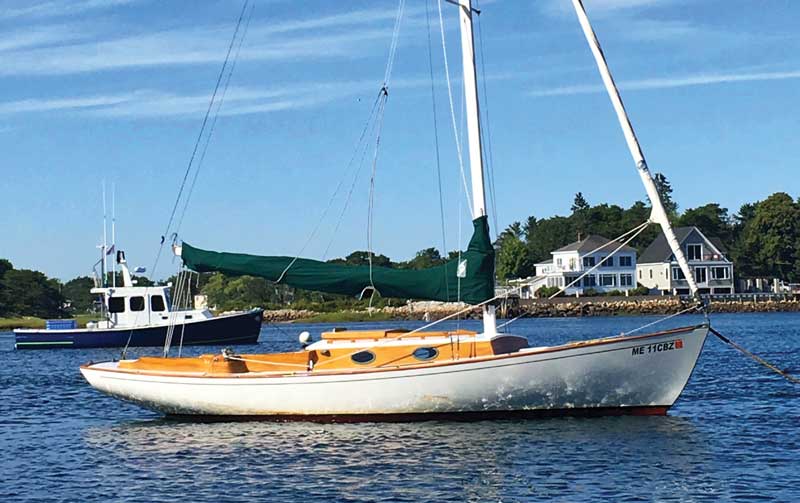 As I write this, I am leaning against the newly refinished mast of our 1991 Bridges Point 24, Marion Rose, a lovely Joel White-designed sloop. We’re at anchor in Love Cove, in thick fog, swinging almost imperceptibly. I have been the custodian of this fine vessel since 2003. These boats are beautiful from any angle, perhaps too easy to sail, and, as my spouse and I have learned, relatively comfortable and safe in high winds and seas. 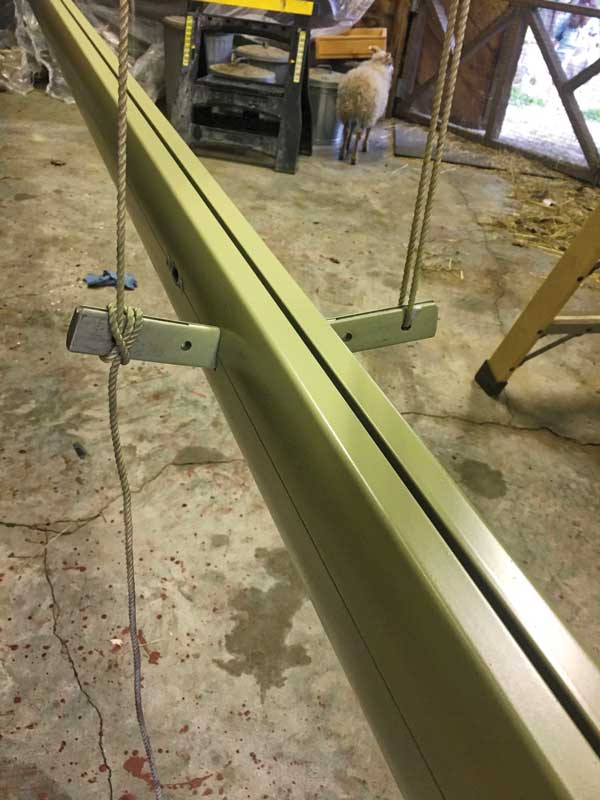 The 36' long corrosion-primed mast hangs from the rafters in the author’s barn. This is a story of my attempt, as an intrepid hobbyist venturing into unknown territory, to complete a professional refinish of our boat’s aluminum spars. Other than stepping the mast—which I do every year with a good friend, a ladder, and a block and tackle—I have refinished or repaired every other part of the boat by myself. I had procrastinated on the spars because aluminum is tricky to refinish. But it was time. I took a deep breath and dove in.

I began by photographing and removing all rigging and fittings, putting everything in labeled plastic bags. After removing the halyard winches, the first challenge presented itself: the halyard pad screws and halyard cleats were badly corroded after 18 years of service, and would not budge. When penetrating oil, an impact driver, and drilling failed, I resorted in frustration to using a cold chisel and hammer. Of course this damaged the halyard pads, so I called Cara Read at Hall Spars. Although she found a new set of winch pads, she helped me decide that I could salvage the old ones. They were sandblasted and set aside for painting. The cleats went into the recycling can.

I had initially thought I would sand to bare aluminum only where the paint had lifted, but the corrosion would not fully come out with sanding. So, I sandblasted the entire mast. Defects were filled with JB Weld, and sanded smooth. At the holes where the spreader support passes through I was reminded of an argument between one of my shrouds and a whale-watch boat’s bowsprit. My shroud lost, and now I noted small depressions in the mast from the spreaders being violently twisted. I filled these and moved on.

When it came time to choose paint, the ever-helpful Milt Farrin at Hamilton Marine steered me to Alexseal products, whose finish can be touched up to repair inevitable minor damage. While in the store I called Alexseal representative Alistair Smith, who not only helped me choose the appropriate products, but also helped me numerous times later in the process. Even with Alexseal tech sheets I had many questions, which he readily answered. 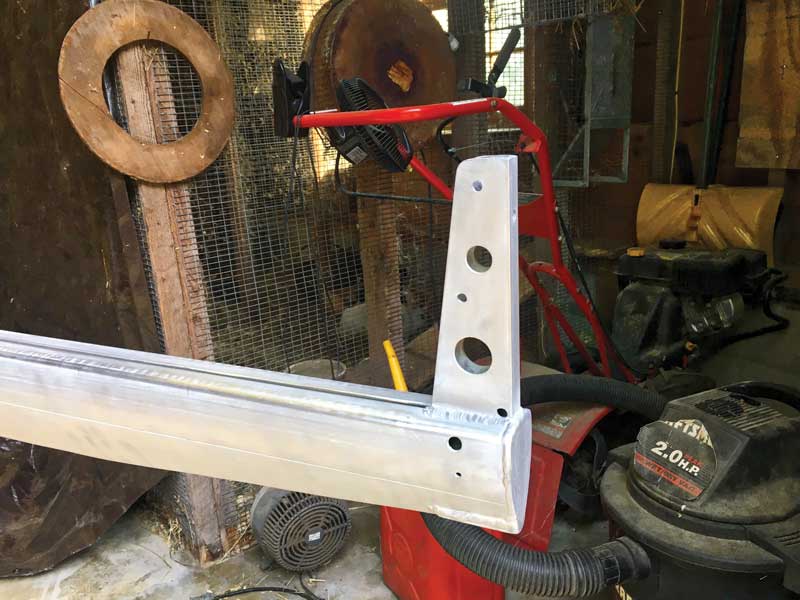 I had been threatening to spray paint something for decades, and now was the time. A local master auto-body repairman gave me the scoop on a good gun for the job. I hung the mast from the rafters of our barn, sanded it a final time, and washed it twice with acetone. Then came a coat of CorSpec, the critical step in preventing oxidation and thus failure of the coatings, two coats of primer, and then two coats of topcoat. After each step, I inspected my work and learned (again) that there is a fine line between full coverage with a glossy finish, and sags. With Smith’s mentoring, I sanded off the drips and tried again (and again). The end product, while not perfect, is perfect enough that I am not prone to point out the flaws to others, a classic sign of an amateur. I’ll do even better next time.

Meanwhile, I cleaned, buffed, and polished every part to be reinstalled, bought rope for new halyards, and relearned how to splice. My new bronze halyard cleats came from Spartan Marine.

Now came the fun part: reinstalling everything. I started with the spreaders, and the past argument with the bigger boat came up again—the aluminum bar that holds these on had been slightly bent. With the help of Tim Greene, master blacksmith and friend, straightening the bar was simple, using a vise and carefully placed shims. Still, the spreaders would not go on. Another call to Read at Hall Spars resulted in a tip—turns out Hall compresses the masts with woodworking clamps to get the spreaders on, which also assures a tight final fit.

I asked what they do to mitigate the corrosion that comes with fasteners of dissimilar metals and ended up with a tube of Duralac, and the suggestion to put a single layer of electrician’s tape on fixtures, to isolate hardware from the spars. I finished the spreaders by installing white leather boots that I made. A pad of the leather inserted between the mast boot and deck prevented leaking—the first time in 15 years. 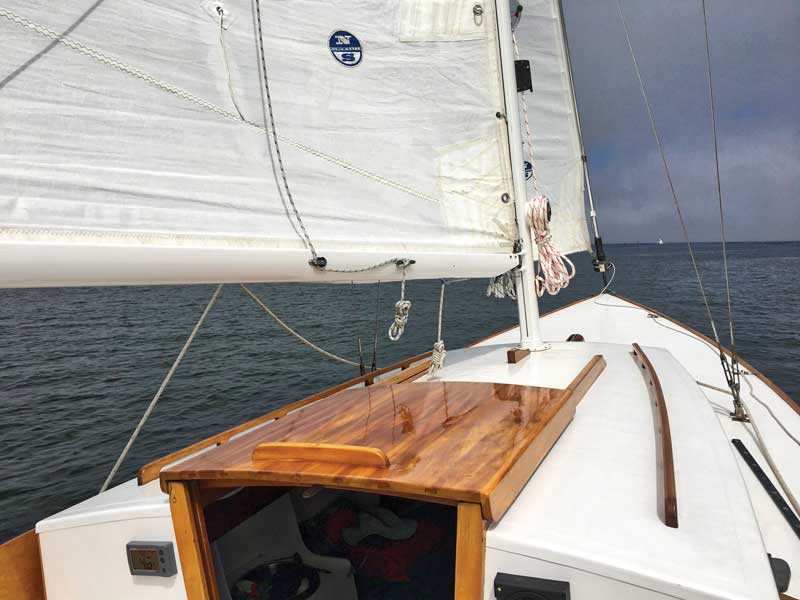 The glossy white spars, and new halyards and hardware, give the finishing touch to the boat. New sails are stored in the attic for use in the upcoming season.

I am pleased with the final result—the peeling and corroded spars were an eyesore for this gorgeous vessel—and am grateful to the people mentioned above for their help. Without it, this project would have taken much longer. The experience offered another valuable lesson. When repairs seem to cost more than expected, it could well be that unknown factors may have expanded the amount of work required. Maybe a few bolts broke, or the spirits that govern the flow of paint or varnish were otherwise busy that day. As in many parts of life, communication, with good intentions at heart, is key.

Geoffrey Bove is a neuroscience professor at the University of New England. Since writing this article he acquired a second Bridges Point 24, which will receive full restoration over the next year or two, including repainting the spars.