Fishing for memories and breakfast 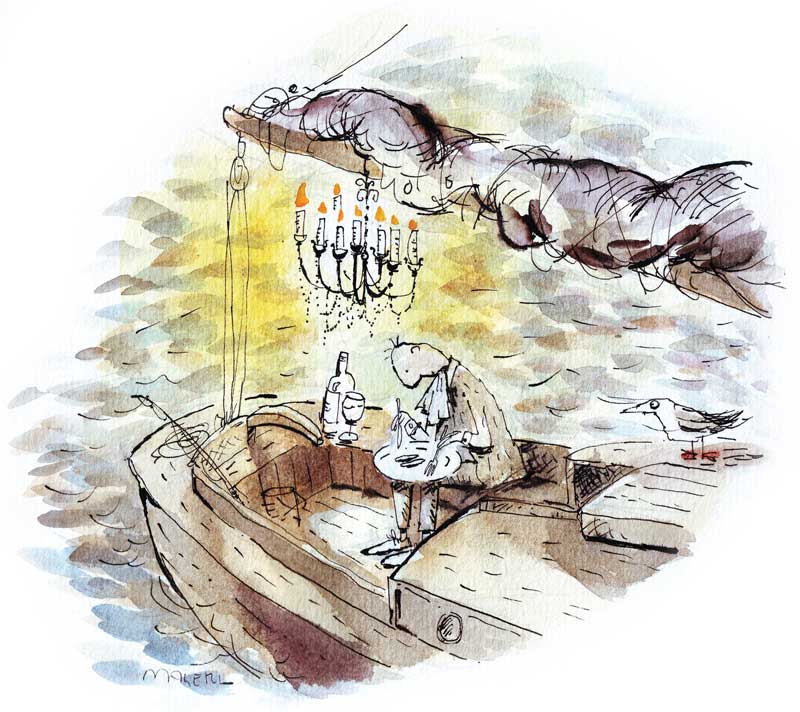 I’m not much of a fisherman any more. I used to be a champ, but something happened. Back in the day, when we wanted fish for dinner, I could take my gear over to the Fisherman’s Co-op here on Swan’s Island and be pretty sure of bringing back a bucket full of mackerel in an hour or so. The Co-op was the place to go because brine and bits of nice ripe herring from bait barrels in the sheds, which were built over the water, dripped through the floors creating a permanent chum for hungry mackerel in the waters below.

But I didn’t need the Co-op for success. When out cruising the mid-Maine coast in my engineless catboat Penelope, I could drop a line almost anywhere, and dinner would almost jump into the boat.

I remember one evening many years ago when Penelope was tied up at the town dock in Boothbay Harbor and some boys were fishing nearby for mackerel. You could see flashes of silver in the water from a big school in a feeding frenzy. I didn’t have a rod or any lures or mackerel jigs, but I did have a hand line and hook. A bit of a white rag went on the hook, and with that rig I soon had as many of those streamlined beauties as I could use.

Somewhere along the line, fishing became more difficult for me, and success was no longer assured. Long stretches of unrewarding effort, times when no matter what the gear or technique, results were uniformly dismal, led to a lessening of enthusiasm for the sport. Gradually anticipation of success was replaced by the gloomy expectation of failure.

In some cases the causes for this change in fortune had little to do with me, but were the result of sad ecological changes. If I could no longer catch flounder in Monhegan Harbor as I had so successfully done in the late 1940s and early 1950s, it was because the eelgrass that had been their habitat there (and in so many other places) was gone. Also at Monhegan, we used to go out to a deep hole in the waters west of the island and, using heavy jigs on very long lines, catch cod and cusk. The action was nonstop, and a morning’s work would provide “baked fish” for a hoard of hungry boarders at lunch or dinner at the Trailing Yew (that legendary island boarding house known for baked fish and homemade donuts). It’s been well over a half century since I’ve tried it, but I’m told baked fish is a little harder to come by these days, too.

The mackerel thing is different. They are still here, although perhaps not in the numbers that were present when Swan’s Island was home to a fleet of island-built mackerel schooners, and was famous for the fishery. It is just that I can’t catch them anymore. Kids do, old ladies on the town dock do, but not me. I’ve just about stopped trying.

Occasionally though, old atavistic urges stir. I get a hankering to fish, and I get a hankering for mackerel. In spite of its many misguided detractors, the mackerel is a delicious fish. Broiled under a light coating of Dijon mustard, there are few things on earth as good.

One morning last week, morning coffee in hand, I sat on our porch on City Point (so called because of the congregation of Indians who used to clam, fish, and summer here) admiring Penelope on her mooring, and thinking about the day ahead. I decided to give the mackerel off the Fisherman’s Co-op another shot. Maybe the fancy gear I’d brought up from our winter home in South Carolina would change my luck. Recreational fishing down there is a much more serious business than it is here on the coast of Maine. There are many more species to pursue, and a vast array of equipment to pursue them with. Scented, finely detailed replicas of bait that fool redfish and spotted trout down there looked particularly promising up here. How about an incredibly lifelike shrimp replica soaked in fishy brine right in the package from the “Gulp” company? It had to be better than a primitive old mackerel jig. I just knew the results would be astounding.

I rowed out to Penelope to get my elegant graphite spinning rod and an assortment of irresistible simulacra from “Gulp” Inc. A bottle of Repel completed my kit, for although I am anxious to attract fish, I don’t feel the same way about the ever-present flies and mosquitos.

Back in the dinghy I tied on a delicious-looking chartreuse shrimp worthy of Leonardo’s notebooks and trolled it during the half-mile or so row out to the Fisherman’s Co-op. No takers. I tried a variety of lures off the Co-op and a variety of techniques from trolling to cast-and-retrieve, and even a spell with a noise-making bobber, but apparently the local mackerel were not impressed by southern fishing magic.

Just as I had accepted defeat once again, I noticed a faint twitching at the end of my rod. I had a fish. Only seven or eight inches long, this little fellow would be an obvious candidate for immediate release, but, unfortunately, he had not taken the bait (thus robbing me of that one small victory), but somehow had managed to impale his belly on the hook. He would not survive so I dispatched him, and tossed him into the bucket I had optimistically brought along to fill with fish.

Back on Penelope I cleaned my catch, dribbled a little olive oil into a cast-iron frying pan and gently sautéed my breakfast. He was small enough to cook whole and when done, the flesh came away from the backbone cleanly, leaving two perfect boneless morsels. Salt and pepper were the only additions to this repast along with a glass of Chardonnay, which, in spite of the early hour, seemed required by the occasion.

We try to eat well here on the island. Chilled lobster served with homemade mayonnaise is a perennial favorite, along with clams, mussels, good steaks, and the occasional leg of lamb, and we get wonderful fresh haddock from The Island Market and Supply. But, remembering all those great meals, I can still say that last week’s little tinker mackerel was the most enjoyable thing I’ve eaten this year.

Maybe I’ll give the waters off the Fisherman’s Co-op one more shot. That fancy spoon lure with the little whirling propeller looks like it should really do the trick.

W. R. Cheney is the author of Penelope Down East: Cruising Adventures in an Engineless Catboat Along the World’s Most Beautiful Coast published in 2015. He and his wife live in Swan’s Island and South Carolina.