Artist Rosemary Levin hooks everything from bridges to sailboats

Every summer Levin’s The Fleet, 2011, hangs behind the Commodore’s table at the Winter Harbor Yacht Club. Hand-dyed and -hooked wool, 12"x36".

Rosemary Levin is a rug hooker and an environmentalist. When she sat down recently to discuss her art and life, she began by talking about the shorebirds in Corea, Maine—actually, the absence of them. With expanded harvesting of seaweed, some birds seemed to have disappeared from the local waters, she said. “When you take the food away,” Levin explained with concern, “it changes the whole environment.”

In the 15 years that Levin and her husband Garry have lived in this picturesque village on the southeastern tip of the Gouldsboro peninsula, they have supported a variety of conservation organizations, including Frenchman Bay Conservancy and Maine Coast Heritage Trust. They take part in the New Year’s Day bird count and they helped establish the 600-acre Corea Heath Preserve. They’ve worked on other area projects, as well, including Taft Point, Frances Wood, Long Ledges, the Schoodic Connector Trail, and the new Day Ridge Preserve. 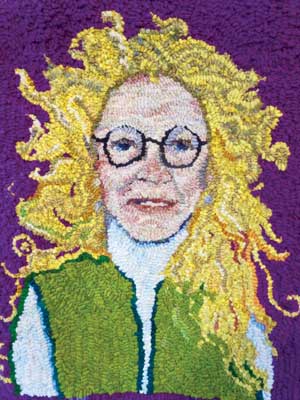 Rosemary Levin’s wild and woolly Self-Portrait, 2010. Hand-dyed and -hooked wool, 22"x 8". In 2004, Levin began pledging part of her art to protecting the environment. That was the year she began hooking a series of rugs—one a year—featuring stylized images of the famed Rockefeller bridges in Acadia National Park. She donates each rug to Friends of Acadia to be auctioned off at their annual fundraising gala.

On schedule to complete all 17 bridges by 2021, Levin already has begun working on the rug for next summer’s auction. This one, her fifteenth bridge, will feature the Jordan Pond Road Bridge in Seal Harbor. The rugs have sold for as much as $6,000, with all proceeds going to park stewardship. “This is what I can do for land conservation,” she said with conviction. Levin is currently organizing a show of work by 30 rug hookers around the theme “Acadia Buzz” to be shown in Schoodic Arts for All’s Hammond Hall next summer.

In 2009 she launched the “Hooked on Knockabouts” rug-hooking project, featuring the Winter Harbor 21s, a fleet of nine one-design sloops built in the early part of the 20th century specifically for Winter Harbor sailors.

Levin had designed a rug pattern for one of the knockabouts for a member of its crew, Sturgis Haskins, who was an avid sailor, a beloved member of the local community, as well as an enthusiastic rug hooker. She then enlisted nine different hookers to create rugs using a slightly tweaked variation on the design she had created for Haskins. Each hooker received the same design, but was allowed to choose his/her own colors, style, and details (trees, clouds, buoys).

Levin ended up hooking the pièce de résistance: all nine sailboats in a single 18-by-46-inch rug titled The Fleet. The rug is displayed behind the Commodore’s table at the Winter Harbor Yacht Club each summer.

When asked about her artistic influences, Levin points to a broad shelf of art books in her studio workshop. She said she likes color and design and puts them together to “just make it work.” Recent pieces feature a beaver lodge in the Corea heath, a line of trees glowing in the morning sun, and a colorful mosaic sampler with the message, “Use it up/Wear it out/Make it do/Or do without.” 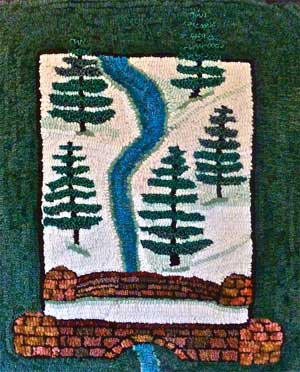 Each year Levin hooks a Rockefeller bridge as a gift to Friends of Acadia. Chasm Bridge, 2012, exemplifies her stylized rendering. Hand-dyed and -hooked wool, 21"x18". Levin uses monk’s cloth, a 100-percent-cotton fabric, as the base for her rugs. She dyes her own wool, designs the motif and then hooks it. “It’s going to take a long time, so I want it to be something fun,” she said.

Levin works from sketches and paintings, but also has a design program on her iPad. She does a number of commissions, including a recent 7-by-4-foot rug depicting a stand of birch trees with red rocks and forest floor at their base. She and her husband delivered the rug to a beautiful post-modern 1950s house in Philadelphia where they installed it over the fireplace. “We climbed on six-foot ladders and reached up as far as we could,” she recounted, adding, “and it’s never coming down.”

Levin was born in rural Ozark, Alabama, in 1957. She lived there through high school, then moved with her family to Colorado (her stepfather had a residency in dermatology at Fitzsimons Army Medical Center in Aurora). She studied commercial arts at the Art Institute of Colorado. The family later moved to Fort Benning in Columbus, Georgia. She worked in a frame shop there and developed skills that led to a career in framing.

One day Garry Levin came into the shop “and I framed him,” said Rosemary with a laugh. He was a lieutenant in Advanced Infantry Training. They married and proceeded to move around the country following Garry’s military and other assignments: Connecticut, New Jersey, Arizona, Fort Hood in Texas, and finally Fort Benjamin Harrison in Indiana. By the time Garry retired in 1995, their daughter Jenny had lived in seven states. She now teaches fifth grade in Yuma, Arizona. 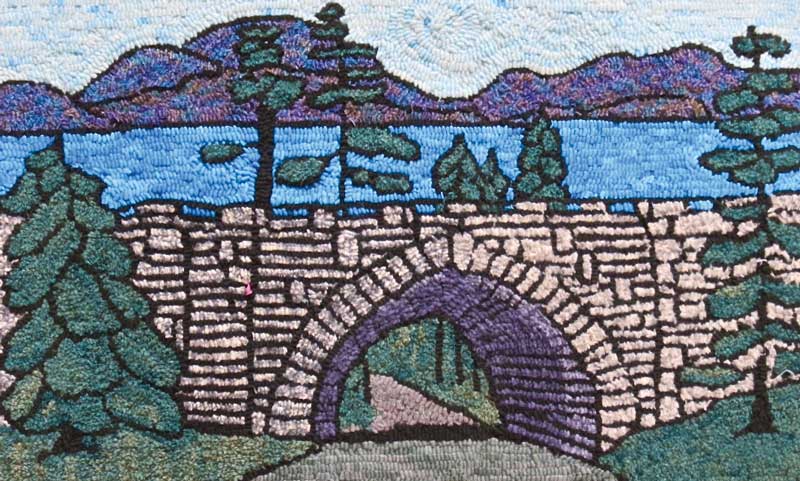 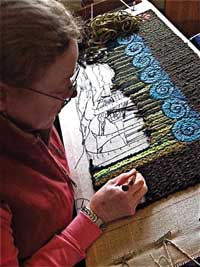 Levin hooking Hadlock Brook Bridge, 2011. She dyes her own wool. The couple bought a house in Lamoine, and Rosemary worked as a framer in Sarah Morton’s Union River Gallery in Ellsworth. She also took an adult education class on rug hooking with some friends—and got hooked. “I was fascinated by it,” she recalled. Garry was working at a bookstore and brought home every book on hooking. A fast learner, she was soon making rugs in her basement, teaching friends and neighbors, and going to fairs.

The Levins moved to Corea in 2003. Three years later they started a business called Chapter Two, showing arts and crafts in the former Corea schoolhouse and an adjoining cottage they call the Spurling House Gallery after the former owner, Marcia Spurling (1904-1994). This “humbly sophisticated, kick-ass gallery,” as it is described on its website, offers a wide range of art, most of it related to Maine. The Levins show the work of about 30 different artists. Of special note are stunning woodblock prints by Dan Miller, who turned 90 last year and continues to come to Corea every summer, after finishing up teaching at the Pennsylvania Academy of Fine Arts in Philadelphia. They also show the politically charged jewelry and totemic sculptures made by the late Fred Woell of Deer Isle. 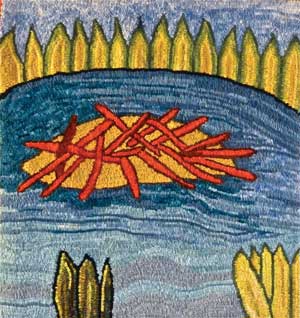 Rosemary Levin’s Heath Home, 2009, depicts a beaver lodge in the Corea Heath. Hand-dyed and -hooked wool, 30"x 29". Garry manages a second-hand and collectible books part of the operation. The books—more than 300 boxes of them—came from his mother, Sylvia Levin (1923-1997), who was a librarian on Long Island, New York. She amassed thousands of volumes over the years, all of which came with her to Maine.

In addition to exhibiting fine art and selling books, Chapter Two hosts workshops on a variety of techniques, from how to “eco-dye” with plants, to Japanese screen structure, a form of board book. They have also collaborated with Acadia National Park, inviting artists in residence to the gallery. Last summer Johanna Finnegan-Topitzer led a session on how to assemble a shadowbox focusing on the flora and fauna of Acadia.

Levin herself teaches rug-hooking year-round, every Friday afternoon. “They come in, I teach them—they take it from there, or they don’t,” she explained. She has recently expanded her artistic repertoire, making books with mussel and scallop shell covers, drawing from her extensive collection of shells collected on beach walks.

Whether they’re clearing a trail or leading an exercise class at the Gouldsboro Community Center on Pond Road, the Levins are devoted to Corea. Rosemary’s strong sense of community is on display every year at the Thanksgiving dinner she and a friend began hosting in the Corea Grange in 2006. For those who can’t make the holiday trek to visit kin in distant cities, this fulsome potluck repast provides an opportunity to socialize. “It is a family-oriented festive occasion with friends and neighbors in lieu of family,” Levin said.

After a lifetime of moving around, the Levins are in Corea to stay, grounded by rugs, books, art, and community.

Carl Little’s recent books include Philip Frey: Here and Now and Paintings of Portland, which he co-authored with his brother David Little.