These sloops still grace the harbor where they were born 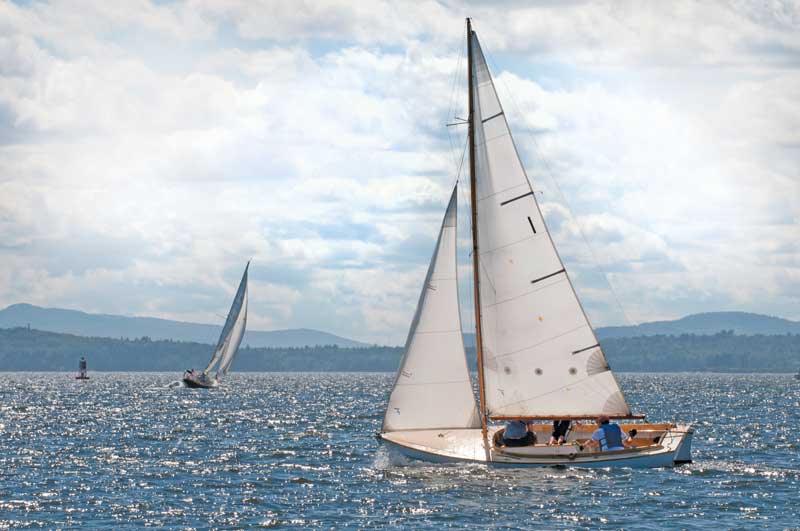 Over nearly seven decades, generations of youngsters have discovered the joy of sailing in one-design Castine Class sloops. Named for the harbor where boatwright Mace Eaton conceived the design and built the first boats himself, the graceful centerboarders still provide competitive racing for sailors young and old on the waters where the boats were first launched.

There was a time when nearly every part of the New England coast claimed a sailboat built to suit the particular needs of the people who sailed them and the unique conditions of the local waters.

In Maine, builders developed handy deep-keel boats with clipper bows and long bowsprits that were good for every kind of deep-water fishing from handlining for cod to trapping lobsters. The boats were built in shops all along the midcoast, especially in Wilbur Morse’s boatshop in the town that gave the Friendship sloop its name. 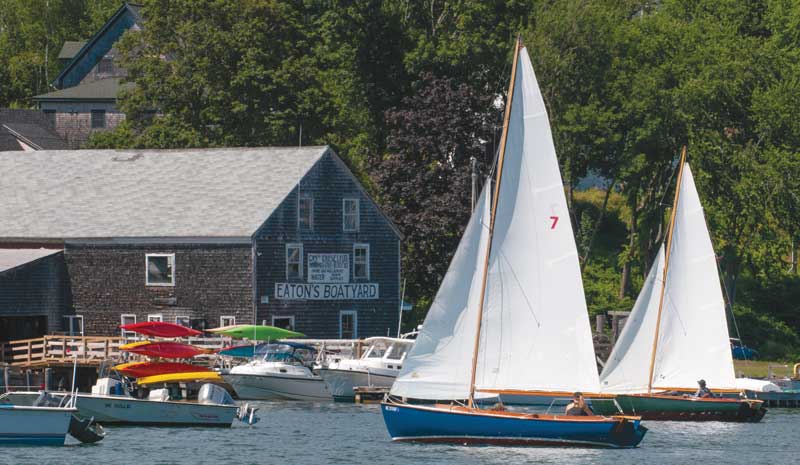 Despite their differences, both types of small vessels were designed to meet the working sailor’s universal needs: ease of handling by a small, often singlehanded, crew; plenty of room for nets, trawl tubs, or lobster traps; and enough speed to get the day’s catch to market while still fresh and, most importantly, ahead of competing fishermen.

Around the turn of the 20th century, fast, handy boats were also attractive to a growing number of summertime sailors. Naval architects famous for their large yachts were commissioned to draw small, one-design boats suitable for yacht club members to race in areas with similar conditions. Many of those boats were named for the harbor where they first sailed or the yacht club that commissioned the design.

Probably the earliest such boat commissioned by Maine rusticators was the Winter Harbor 21, designed and built by Alpheus Packard and W. Starling Burgess in 1906 for yachtsmen in that downeast town’s Grindstone Neck summer community. Nine of the boats, seven launched in 1907 and two in the 1920s, have been restored and are still racing in their home waters.

Two years after Burgess drew the Winter Harbor knockabouts, B.B. Crowinshield designed a 25-foot LOA boat that came to be known as the Dark Harbor 17½. The first version was designed for sailors in Manchester, Massachusetts, the second for sailors summering in North Haven on the Fox Islands Thorofare in Penobscot Bay. The design is now known as the Dark Harbor 17, in honor of the eponymous summer community on Islesboro that was the third to adapt Crowninshield’s design. A little less than three decades later, Sparkman & Stephens designed a larger boat that bears that community’s name: the 30-foot Dark Harbor 20. 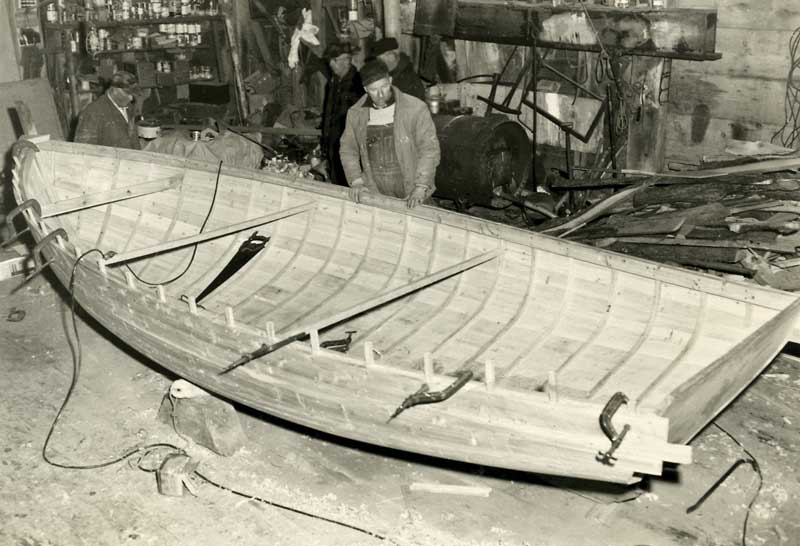 Mace Eaton (left) and Alonzo Eaton (center) with a Castine Class sloop under construction at Eaton’s Boatyard in the early 1950s. The shop looks much the same today. Photo courtesy Castine Historical Society

A class is born in Castine

While those one-designs were the product of a collaboration between a designer and a boatbuilder, there is a classic, wooden one-design still sailing on Penobscot Bay that is truly the product of one man’s art—the 18-foot centerboard Castine Class sloop designed by Mace Eaton and built at Eaton’s Boat Yard on Castine Harbor.

Between the winter of 1950-1951 and 1967, Eaton’s built 20 boats in the class—19 of them are still sailing. The first six or seven boats, launched between 1951 and 1954, were built by Mace Eaton himself, assisted by his son Alonzo. After Mace “retired,” Alonzo—known to all as “Lonnie”—built about a dozen more boats, the last in 1967, using the original molds. Almost 20 years later, in 1984, Joel White of Brooklin Boat Yard built two more boats using those same molds loaned to him by Lonnie Eaton.

Although nominally a one-design boat, the Castine Class sloops show a certain amount of individuality. That’s hardly surprising since Mace Eaton drew no plans for the boat; instead he carved a pine half-model to get the lines and the Eatons built the boats by eye rather than by measure.

Summer resident and Castine Yacht Club race committee chairman David Bicks owns the Castine Class sloop Caroline B, that was launched in 1966 as the J&B II for John Simons. Writing to mark the 100th anniversary of the Castine Golf Club—the parent of the Castine Yacht Club—Bicks described the boats as measuring “approximately 18' 3 ½" overall, 16' 1" on the waterline and 7' on the beam.” Draft is 10" board up, 28" with the board down. Four of the boats were built with keels and later converted to centerboard configuration.

Eaton built the hulls with cedar planking on oak frames and most had mahogany transoms, painted rather than bright. The first three boats had steam-bent oak coamings; on most later boats the V-shaped coamings are mahogany. On one boat—Hoppie, built for Edward O. Miller in 1960, and still sailed by the Miller family—the coamings are straight because, Lonnie Eaton said, “we ran out of wood.” 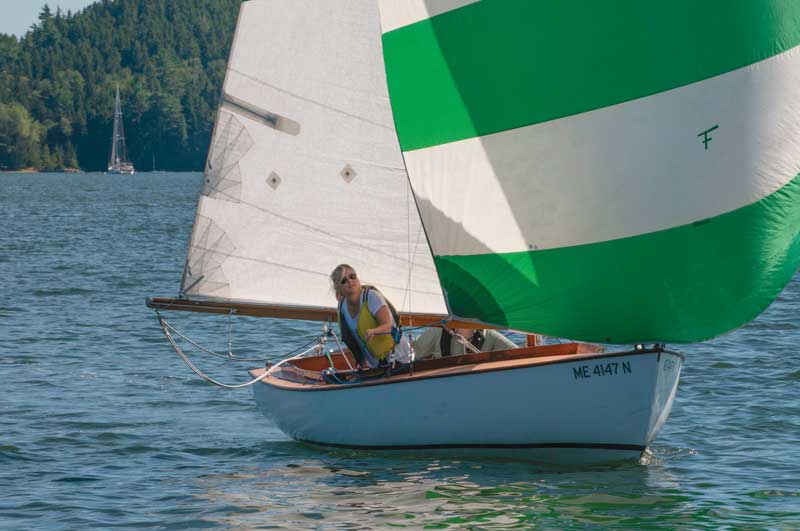 A Castine Class sloop ghosts along under spinnaker in light air on a sunny summer afternoon. The V-shaped cockpit coaming replaced the original steam-bent version starting with the fourth boat Mace Eaton built.

A design with local roots

Few boats spring spontaneously in final form from their designer’s brow, and the Castine Class was no exception.

Early in the last century, Mace Eaton learned the boatbuilder’s trade from his grandfather and father on Deer Isle and in 1924, the story goes, he rowed a dory to Castine with his family to take a job enlarging a sardine carrier. He later started building boats on the beach near the present site of the Castine Yacht Club, which did not yet exist. In 1939, he bought a former salt shed, once used by the town’s Grand Banks fishing fleet, that is still the Eaton’s Boat Yard building.

About a year later, Eaton built a 16-foot sailboat for David Hall of Castine and, in 1942, built a 14-footer for a Nahant, Massachusetts, family. Those boats eventually became the prototypes for the Castine Class.

According to David Austin, whose son Donald still sails the Fanny G, the first of the class, in the winter of 1950-1951 his and two other Castine summer families, the Robinsons and the Brownells, “committed themselves to building three identical boats” they hoped would “become a one-design day sailing and racing class.”

The families sought a boat beamy enough for “five or six people with picnic gear,” shoal enough to be beached, “yet handy enough to be raced competitively” and agreed that a stretched version of the two earlier Eaton boats would fit the bill.

That winter, while Eaton began work on the first boat, Austin took its measurements from the molds and asked Connecticut yacht designer Winthrop Warner to draw a modern rig to replace the stubby wooden pole masts of the prototypes. It turned out that the dimensions were close enough to those of the Rhodes 18 dinghy (designed by Philip Rhodes in 1948 and still built in fiberglass by the Cape Cod Shipbuilding Co.) to use the same rig design. The result was a tall Marconi rig flying 183 square feet of working sail (spinnakers were a later addition) balanced by enough inside ballast, added to the boats after their first adventures in the spring of 1951, “to make them stiffer,” Austin said.

The design clearly was a success. After the first three boats were launched, Eaton’s built four more during the 1950s and a dozen during the 1960s. The last, the Dorothy B, was launched in 1967 for Henry E. Erhard and is still sailed by the Erhard family out of the Castine Yacht Club, as are the two boats that White built almost 20 years later.

So too, for that matter, is the 14-footer Mace Eaton built for that Massachusetts family almost 80 years ago. In 1988, Bicks found the boat in Amesbury, Massachusetts, restored it, and now keeps it on a mooring off his Castine boathouse.

“These boats have been a source of great joy, friendly competition, and camaraderie for almost 60 years,” Donald Austin said of the centerboarders, which are still sailed—as racing boats and youth trainers as well as just for fun—at the Castine Yacht Club. “They are the foundation of that yacht club, for the whole enterprise that is the Castine Yacht Club.” 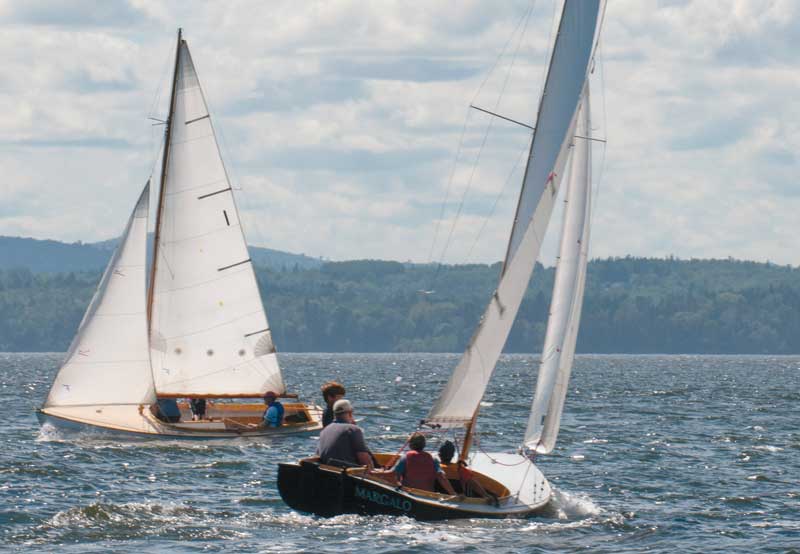 Margalo (foreground) is one of two Castine Class sloops built by Joel White at Brooklin Boat Yard in 1984 and is virtually identical to the Eaton-built boat in the background. The curved cockpit coaming suggests she is either Fanny G, Betty P, or May B (ex-Kate), the first three Castine Class sloops, all launched in 1951.

Hopes for the future

Class races that brought just a handful of boats to the starting line just a few years ago now draw larger fleets and “the quality of the racing has gotten better,” Austin said. Still, the question of whether the enthusiasm to maintain a fleet of old wooden boats in sailing, let alone racing, condition remains.

“I have great affection for the Castine Class boats, but I’m nervous about what lies ahead,” Bicks said.

Austin talked about how more entertainment options and shorter summer vacations, among other factors, have reduced interest in the boats. Like him, Bicks is unsure whether “generations to come will be prepared to invest the time and money necessary to keep these old gals sailing.”

According to Bicks, while the hulls have held up well, like virtually any wooden boats of their age that are still active, most of them have already been refastened at least once. As many of them near 70, more refastening is probably just over the horizon. And there are other issues.

“The frequent breakdowns on the race course are discouraging,” Bicks said. “The old bronze spreaders, iron centerboard fittings, and rudder gudgeons and pintles are soft spots” that can be difficult and expensive to repair or replace.

That said, this past summer 19 of the Eaton-built boats—including all three launched in 1951—and both Joel White boats were still active on Castine Harbor, sometimes with teenage crews, sometimes with their parents or grandparents contentedly at the tillers. Austin hoped that will continue.

“It’s my wish that we can interest new people to celebrate a wonderful tradition,” he said. “It means a lot to me.

Stephen Rappaport is the Waterfront Editor at The Ellsworth American, has lived in Maine for more than 30 years and is a lifelong sailor.