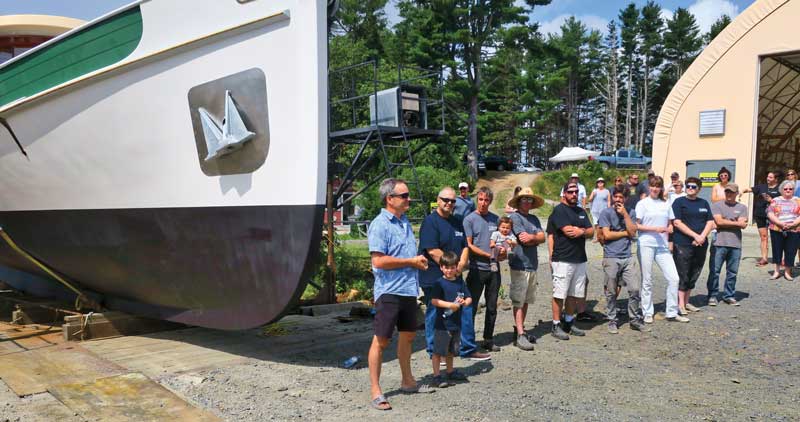 The launch last August of an elegant motorsailer named Tari-Ann is the largest build to date by Tern Boatworks, a relatively recent boatbuilding operation in Nova Scotia that began in the back of its founder’s car.

The 48-foot Tari-Ann is also “the most collaborative project between boatbuilder, designer, and owner I’ve ever worked on,” said Bruce Thompson of Tern, which builds and restores custom wooden vessels in the Chester Basin on Nova Scotia’s South Shore. Tern has come far since he started the company almost 15 years ago.

Thompson came to boatbuilding as a passionate sailor; he built a trimaran in his parents’ garage at age 16. But when he graduated from high school, boatbuilding programs had become scarce in Nova Scotia. He found work with the Royal Nova Scotia Yacht Squadron in Halifax and considered moving to England for training. Instead, he was hired by Covey Island Boatworks in Petite Riviere and went on to apprentice with them while taking night classes at Nova Scotia Community College. He left five years later to sail to Florida, the Bahamas, and Cuba.

In 2004, Thompson returned to Halifax, where his now-wife, Sadie, was attending college. He found work with a boatbuilder in the city but didn’t like the shop’s move away from wood to focus solely on fiberglass builds.

“It wasn’t where I wanted to be going,” he said.

So when a customer asked him to build a boat galley after hours, he began working out of his car on the side. As more jobs followed, he rented space and hired his first employee, building interiors, a spar, and a teak deck. In 2005, he built the current shop at the Gold River Marina in Chester Basin, whose new owners recognized the value of Tern servicing the area’s wooden boat fleet. Today, Tern has 12 employees.

“It wasn’t my intention. It just kind of happened,” said Thompson. 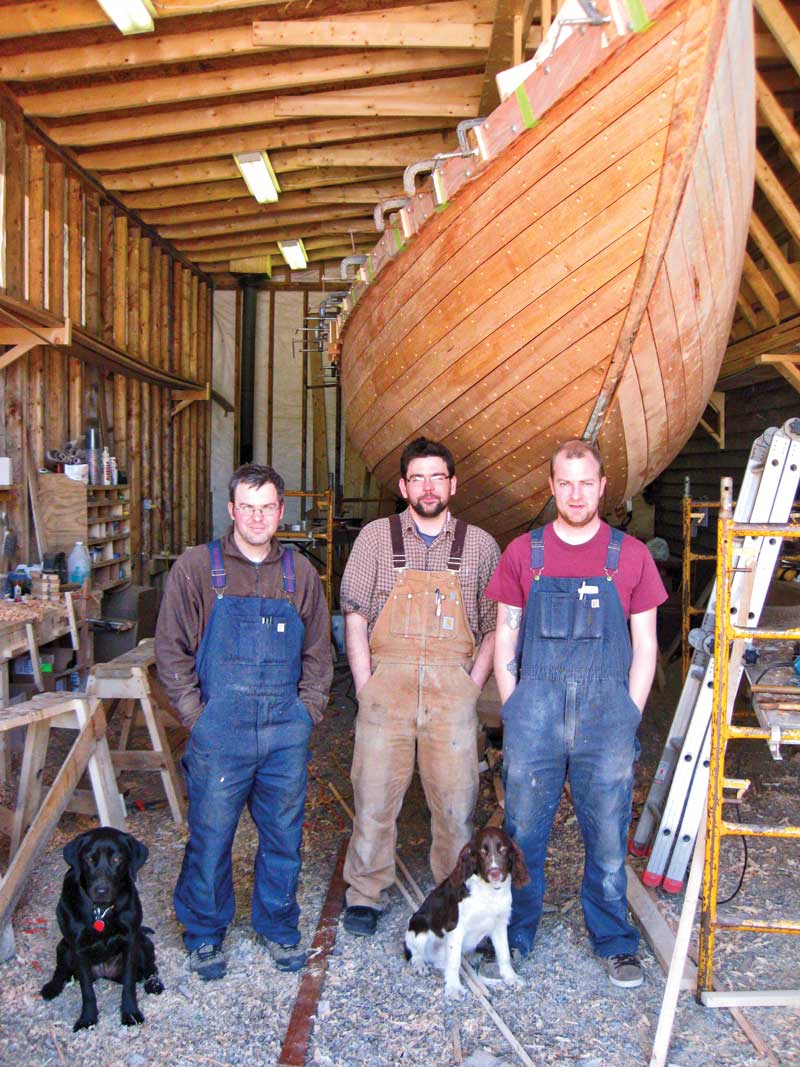 Bruce Thompson, Neil Joyce, and Lucas Gilbert during the build of the IOD Enigma. Photo courtesy Tern Boatworks Tern’s first big job was the restoration of Seneca in 2006. Built in 1907, the 46' P-class sloop was designed by Nathanael Herreshoff for the Canada’s Cup but was converted into a schooner in the 1920s. Tern restored her to her original lines, following drawings from the Herreshoff Marine Museum in Bristol, Rhode Island; it was close to a complete rebuild.

The shop’s first new build also required some digging into the past. In 2009, Thompson and his crew built
Enigma, a 33' open-cockpit daysailer, and the first International One-Design built in wood since the 1980s. To build her, Tern applied to the IOD World Class Association and followed 1936 drawings. After she was finished—in white oak backbone and framing, with mahogany hatches, transom, cabin sides, and covering boards—the IOD association dispatched three inspectors to Tern to certify that the boat qualified for competition.

“The biggest discrepancy was one-eighth of an inch,” said Thompson. Enigma remains in Chester, competing in the local fleet of eight IODs.

From the start, Thompson wanted a business that was not just profit-driven. “Obviously it has to work, but to us, it’s more important to have good quality work going out the door,” he said.

The enthusiasm of Tern’s crew backs Thompson’s sincerity. His first employee, Lucas Gilbert, worked with Thompson at the Halifax boatyard and began at Tern a year after Thompson started. “I came as quickly as I could get there,” he said.

Another longtime employee Neil Joyce approached Tern after seeing Seneca’s restoration. A graduate of
the Apprenticeshop in Rockland, Joyce manages the yard’s steady stream of maintenance and repair jobs, which includes a service and storage program for the area’s wooden boat fleet. 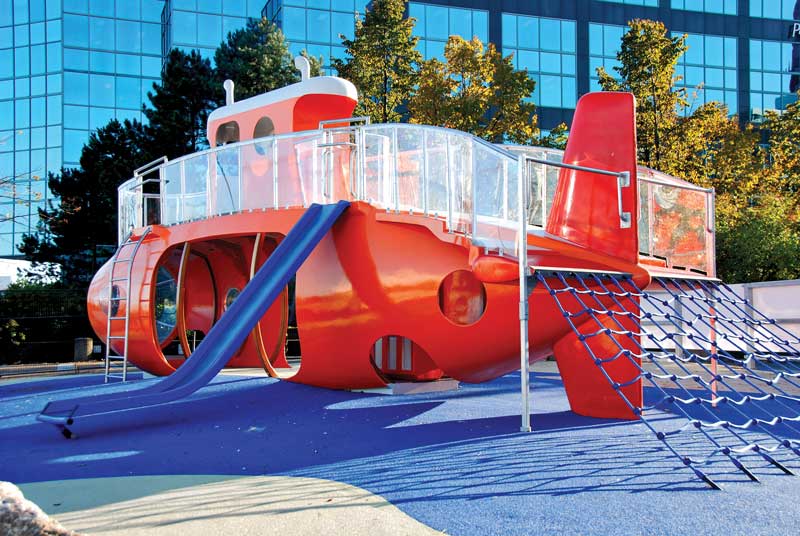 Tern is also willing to undertake unusual projects. In 2010, Thompson asked Laurie McGowan of McGowan Marine Design in Mochelle, Nova Scotia, to work on a proposal to replace an old wooden tug playground on the Halifax waterfront. McGowan used his modeling skills in TouchCAD software to demonstrate their idea for a submarine structure. The team’s idea was selected and the crew at Tern built the submarine using modern wooden boatbuilding methods: It has a wood-epoxy strip-plank construction for the main body with fiberglass fins and conning tower.

Thus began a designer-builder partnership between Tern and McGowan, a graduate of the Westlawn Institute of Marine Technology yacht design school. Subsequently, when a repeat client asked McGowan to design a new boat for cruising the Bahamas, he recommended that Tern be the builder.

The client, Tom Goodwin, had worked with McGowan before on the 27' solar/electric ketch Czarina, built by Covey Island. This time, he wanted a motorsailer based on a 1912 John Alden design. Goodwin also suggested elements from his brother’s Chesapeake Bay buy boat (also called a deck boat), the 84-year-old Yamacraw, which hauls freight between Bahaman islands. McGowan incorporated details from the Alden into a buy-boat shape, including a high stem, prominent sheer, a wheelhouse, shallow draught, and V-bottom.

Construction of the 48-foot Tari-Ann began in the fall of 2015. The hull is cold-molded plywood/epoxy with much of the interior finished in cherry.

Tari-Ann has accommodations in cabins fore and aft. Her ketch rig is designed to employ the jib and mizzen for motorsailing and the mainsail on long reaches. Goodwin chose a rebuilt 155-hp Detroit 4-71 diesel engine, keeping in mind that more sophisticated power systems would be harder to fix in the Bahamas. For the same reason, systems were kept simple and include an autopilot and an inverter, generator, and solar panel.

“A lot of the sole is removable to access certain things,” said Thompson. “I think it’s always good to be able to get a motor out of a boat. Tom was on the same page.”

Both McGowan and Thompson praised Goodwin’s eye for detail. That comes through in elements throughout the boat, including custom curved, pocket windows and a built-in desk with a swing-out stool. Goodwin also wrote out Tari-Ann’s name in cursive, which Tern copied onto the transom. For paint, Goodwin mixed various colors and dabbed them on a palette to show where each should go. Finish is roll and tip, which is in keeping with her old-fashioned appearance. 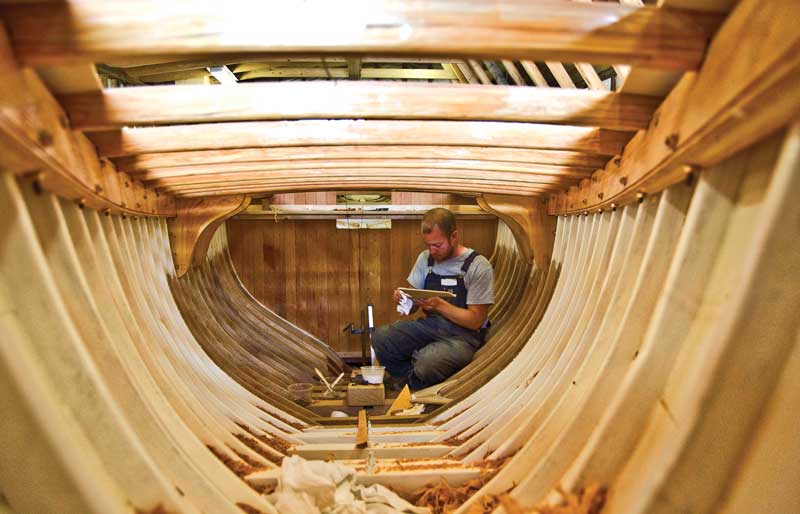 No detail was too small to be overlooked. Gilbert, a trained machinist, made most of the hardware at his machine shop, New Dublin Ship Fittings. Chainplates have a sculptural shape and matte finish. Even light switches are beautiful. Gilbert crafted brass wall plates surrounding simple toggles.

With Tari-Ann in the water, Thompson had a pipeline of projects to begin next, but he was also getting ready for the company’s next big step. Tern is growing, building a new shop on a four-acre site in LaHave. The lot includes a house, which will accommodate visiting interns. He plans to move new builds to LaHave while keeping repairs and maintenance in Chester. LaHave is also where he and Sadie live with their two young children, Eamon and Enid, so the new yard will drastically shorten his-now 40-minute commute.

“It just got to the point where we had to pull back or move ahead,” said Thompson.

Melissa Wood is a freelance writer based in Portland, Maine, and Lunenburg, Nova Scotia.

To Sit or Not to Sit?