A Maritime Museum and More 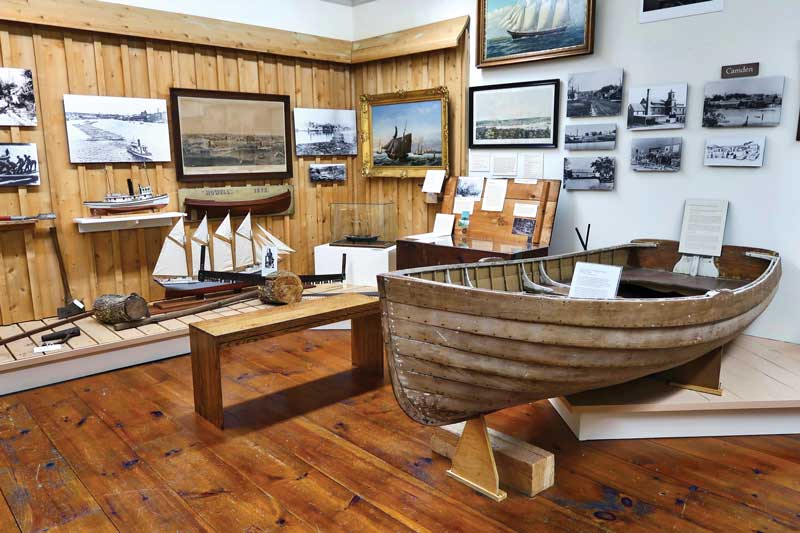 Sometimes, things don’t go according to plan. In 1845, as town fathers considered what to name a newly incorporated municipality carved from East Belfast and Prospect, they hit upon the idea of honoring summer resident David Sears II. Surely, they reasoned, the wealthy Boston philanthropist would be hugely flattered and become a major Searsport benefactor.

At first, it worked: Sears donated $1,000 for the construction of a town hall. However, at his first viewing, he declared in disgust that it resembled “a powder-house,” and never gave the town another cent.

I learned this cautionary tale recently from a placard beside the diminutive, now-173-year-old brick building (which does look a little like a gunpowder magazine). Today, the old town hall, repurposed as exhibit space, is part of Searsport’s Penobscot Marine Museum, which encompasses about a dozen original structures, most of them listed on the National Register of Historic Places.

Today the busy Port of Searsport continues that deep-sea connection, handling both dry and liquid tanker cargos that include road salt, wood products, and fuel oil.

The museum chronicles the glory days and other chapters in Maine’s maritime history through such artifacts as ship paintings, scrimshaw, ship models, vintage small boats, and Chinese porcelain brought home by local captains. Its library holds important archives plus several historic photo collections. A recent addition is photos of Maine and its hardy folk taken in the early 20th century by Rockland-based, award-winning photojournalist Kosti Ruohomaa. An exhibition of his evocative images continues through October 21.

This season’s 2018 gallery show, housed in one of the brick storefronts that line Main Street’s Historic District, showcases the museum’s impressive collection of ship models. Also on view is an intriguing apparatus that employs a guided pencil to transfer a half-model’s lines onto a plan. Genius! 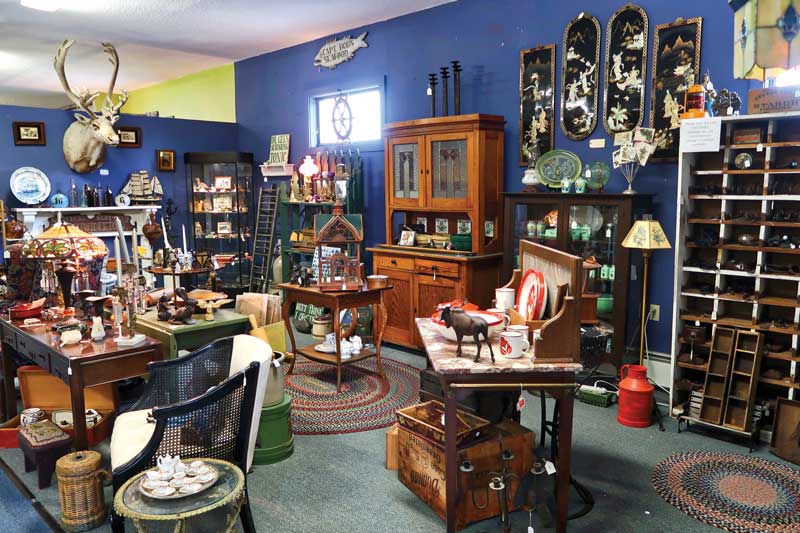 Treasures of all sorts await discovery at the Searsport Antique Mall. Photo by Rick & Mimi Steadman

Elsewhere on Main Street, Captain Tinkham’s Emporium, an outpost of Liberty Tool Co., is crammed with all sorts of vintage hand tools. It’s one of the many antiques shops that make Searsport a magnet for treasure hunters. Among others are Pumpkin Patch Antiques, specializing in fine American furniture; and Dennis Raleigh Antiques, offering decoys and American folk art. The head-spinning hodgepodge at the Treasures and Trash Barn is a nirvana for any American picker. At the well-organized, multi-dealer Searsport Antique Mall, I spotted the word Lobster in shiny red, foot-tall script. I could practically hear it begging to be hung in one of those stylish coastal cottages with all-white interiors.

Linked via causeway to the mainland just east of town, Sears Island is considered the Eastern Seaboard’s largest undeveloped island. The focus of contentious development discussions, this gem is now protected by a conservation easement on 601 acres. We ventured across the causeway, but turned around after encountering a Color Run event in progress. Next time, we hope to follow trails through wetlands and fields, past the site where the summer home of David Sears once stood, and down to the shore.

Who spends a day in Searsport without visiting Hamilton Marine? Not my husband and me. We agreed we didn’t need any boating supplies; we’d just have a look around. Of course, we didn’t leave empty-handed. Which proves again that things don’t always go according to plan. Sometimes, in Searsport, that’s a good thing.

If You Go To Searsport

Arriving by Sea: Searsport’s wide harbor offers good holding ground in plenty of water, a town mooring available by donation, and a town dock with four feet at low tide. Harbormaster Wayne Hamilton encourages boaters to call him (207-323-0895) in advance for guidance to the mooring or a good anchoring spot. “I just might give them a ride up to the museum, too,” he said. The harbor is open to the southwest; when the prevailing wind is blowing in, consider overnighting in Belfast, to the southwest, or Stockton, just to the northeast, after visiting the museum (a half-mile walk from the town dock).

Hamilton Marine’s original store (one of five along the Maine coast), with just about anything recreational and commercial boaters might need.

Begun in 1905 as a model maker to the U.S. Navy, today offering a wide array of finely crafted wooden kits, plus completed models and repairs.

A casual family restaurant, popular with locals and visitors, with a menu offering lots of fresh seafood and New England pub classics.

Printable trail maps and other resources to plan an excursion are available at friendsofsearsisland.org.