From the Publisher — Issue 154 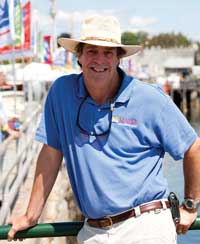 Earlier this summer my son got a job working at a boatyard. He started there the day after he turned 16. As I watched him walk down the hill for that first day of work, hunched over and carrying his lunchbox, I was reminded how many other Maine fathers (and mothers) before me have watched a son (or daughter) go off to do a man’s job.

Were there 16-year-olds helping build the Virginia, Maine’s first ship, at Popham, Maine in 1607? Probably. Just as there were probably even younger boys working at the hundreds of boatyards that lined Maine’s rivers and bays throughout the 19th century. The young back then went to work early, and they stayed late.

Our boy goes to a fine school and does well in his classes. More than likely, he will not be scraping, sanding, and painting storage sheds all his life. But the lessons he learns on this job will stay with him forever. He’ll remember the soreness that comes from physical labor, the sound of a boss, the joy of break time, and the satisfaction of getting a job done.

While he is mostly working alone at this job, he is beginning to enter the social world of the boatyard crew. He wouldn’t tell me much after that first day, not about the work, or anything else for that matter. However, he did say he got into a discussion with a co-worker about Tom Brady and Jimmy G. and the Patriots—sometimes sports talk can be a great ice-breaker.

My first job after college was in a boatyard where, like my son, I got my start scraping and painting. It was hard work but satisfying. My aches and bruises at the end of the day felt like badges of honor for the tasks I had accomplished.

A boatyard is busy, loud, sometimes scary, and full of people from all walks of life, owners and workers. It’s a place of creation and destruction, and Sammy is getting to see it all from behind a paint brush.