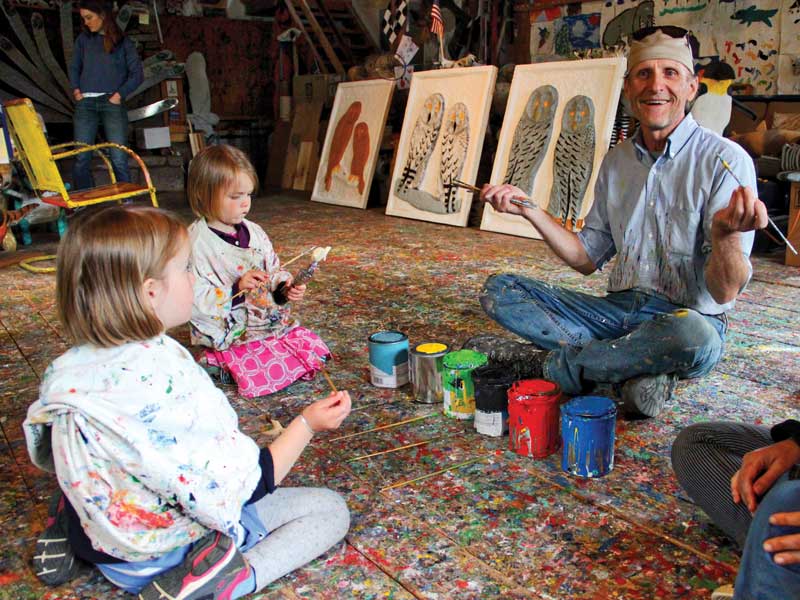 Sculptor Dan Falt invites Maria and Serita Barzun to paint wooden fish in his studio in Northeast Harbor. Over the years Falt has encouraged scores of youngsters to be creative.

The toothy white shark hanging by its tail from the roof of a barn on a back street in Northeast Harbor is the first hint of sculptor Dan Falt’s artistic vision. Step inside the two-story structure, which has served as Falt’s maker space for more than 30 years, and you will be greeted by more sculpted animals at every turn, among them a black cheetah, herons, tigers, peacock, platypus, fox, wild pigs, moose, and hyenas that the artist calls “my self-portrait.”

The shark is made of white pine, as are many of the creatures in Falt’s remarkable menagerie. Why animals? His answer is simple: he loves them and the nature they represent, and “they’re much more fun to make than other kinds of sculptures.”

He is drawn to various sizes and shapes—and personalities. He has never been interested in realistic renderings. Rather, creatures are more like caricatures—their physical traits exaggerated or made comical. And humor is key: With the world in the state it is today, Falt believes that anything he can do to bring laughter and happiness into it is worth doing. For this artist who has suffered major medical setbacks in his life, creatures great and small provide comfort.

Falt’s sculptural practice is somewhat unorthodox. Using West System marine epoxy, he laminates anywhere from three to several hundred pieces of white pine or another soft wood into a single mass from which he makes his pieces. While the lamination process takes time, he said it creates “way fewer problems” than working with a single piece of wood, which may crack or splinter. 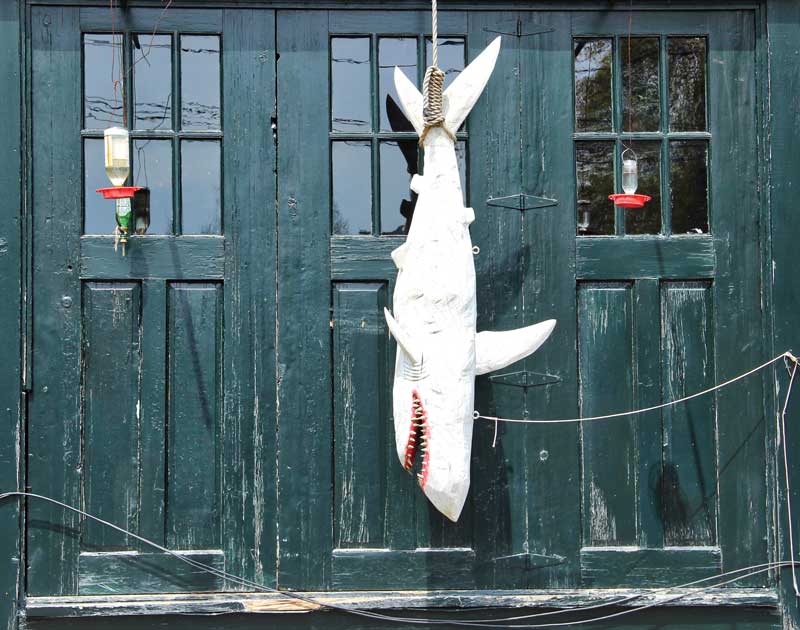 A sculpted shark dangles from the eaves of Falt’s barn studio. His sculptural practice is out of the ordinary: pine boards are laminated together and then carved with various tools.

Working from a photo found online or in a magazine, Falt will draw a front and side view of the animal on the block of wood and then begin to shape it using various tools: chainsaws, hatchets, chisels, adzes, grinders, lathes. Following a great deal of sanding, he applies a primer coat of white paint and then multiple finish coats. He often inserts steel rods into the legs for stability and will add non-wood materials if the piece calls for it. He moves the larger pieces by chain hoist, swinging them out through the side of the barn using an excavator bucket.

Northeast Harbor has been Falt’s base of operations for much of his life, albeit with many journeys far afield as he has explored the world—going on 170 countries visited so far. Born in Bangor, he spent the first three years of his life in Northeast Harbor before moving to the town of Days Ferry in Woolwich. His father, Gordon, had a job at nearby Bath Iron Works. His mother, Ruth, who had been a nurse in World War II and the Korean War, took care of her three boys.

After graduating from Morse High School, Falt attended the University of Maine at Orono to study business and mechanical engineering. Not wishing to be pinned to a desk, he followed a friend to Wall Street on the promise that he could get rich and become a ski bum, his dream at the time.

Falt worked on the Commodities Exchange trading silver, gold, copper, and aluminum. He also played hard at night—this was the early 1980s, the heyday of Studio 54 and other New York City clubs—and contracted hepatitis and mono. He had always been rail-thin, but at one point during this period the 6'2" trader weighed 123 pounds.

Falt fled to Australia to recover. He had not been there long when his younger brother, Tom, called to tell him to fly home to fish. “We’re making tons of money,” he said. Although skeptical, Falt returned to Maine. He spent a winter diving for scallops aboard the Cod Father. 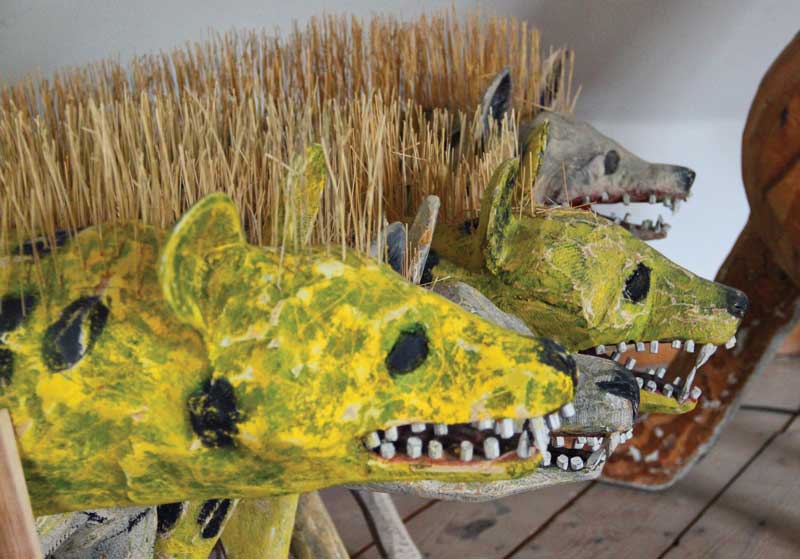 Falt calls the hyena his self-portrait. He has sculpted many of these carnivorous mammals.

While working at a cedar shingle mill in Pretty Marsh on the back side of Mount Desert Island, making little money and getting banged up in the process, Falt started carving small ducks, loons, and whistling swans for Christmas presents. Some friends encouraged him to take the pieces to New York City to sell. Skeptical, he nonetheless followed their advice and landed a deal with a gallery on Greene Street. The pieces sold well and he was off to the races.

Since that time, 1986, Falt has shown his work in more than 40 galleries and museums. His animal sculptures, some of which double as benches, grace households around the world. From those first simple birds he expanded his repertoire to include everything from poodles to whales, seals to snapping turtles.

Falt feels a special kinship with snowy owls. He recounts climbing to the top of Sargent Mountain a few winters ago with some friends and seeing a dozen or so. As the group was getting ready to leave, one of the birds flew over and landed near him—an otherworldly happening.

He credits the summer community for his success—without their patronage, he said, he would not have the wherewithal to pursue his passions. He speaks fondly of two late pillars of the local art scene, Aurelia “Thistle” Brown, who ran the Wingspread Gallery, and Alan Stone, renowned New York City art dealer who summered in Seal Harbor. Brown and Stone showed and purchased his work over the years.

And Falt has given back to his community: he has donated his work to dozens of nonprofits and has served on the board of the Mount Desert Housing Authority. He has also opened his studio to scores of children and their parents and teachers, inviting them into his wild and crazy environment where leopards lounge on shelves and a miniature T-Rex wields a badminton racket. He participates in Art Week at the Mount Desert Elementary School nearly every April, encouraging students to experiment with wood, paint, and other mediums. One of the rewards: when he drives by the school in his pick-up truck, a student will call out, “Hi, Dan!” 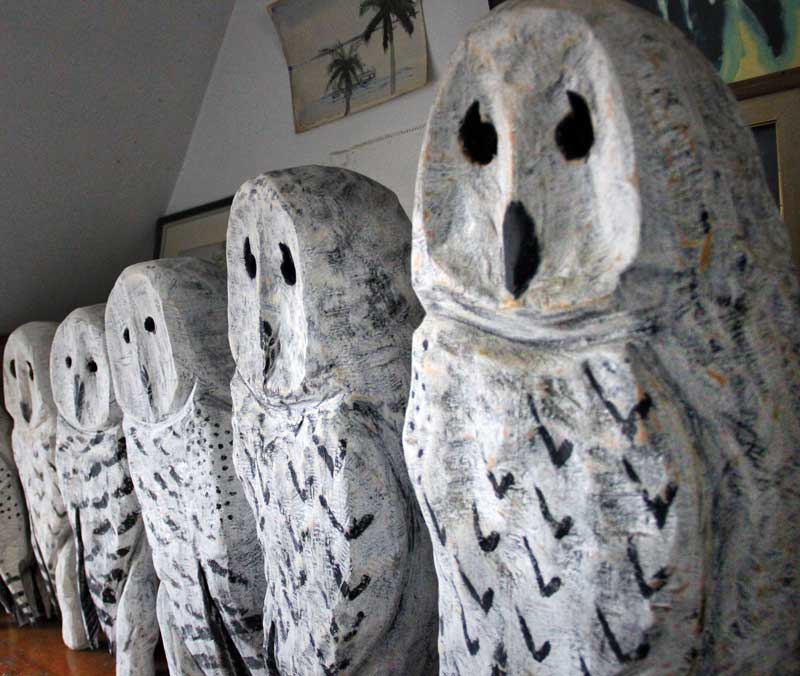 A row of snowy owl sculptures in Falt’s studio.

Falt insists on letting the young artists make their own aesthetic decisions. Setting up a couple of youngsters to paint small wooden fish on a visit this past May, he first asked them what their favorite colors were and then popped open cans of acrylic and laid out paint brushes. His only instruction was tongue-in-cheek: don’t get any paint on the floor (the floor already is as spattered as a Jackson Pollock drip painting).

Further exploration of Falt’s studio barn reveals other passions, including music. He started playing piano when he was ten; last year he purchased a Hammond D-3 organ and has been taking a course in Bangor on mixing and recording. In the early 1990s, he did a stint with a popular local Maine band, the Cool Swells, mainly singing, but also playing guitar and accordion.

An upstairs room serves as a place for meditation. Falt gets up before dawn every morning and sits for several hours trying to clear his mind of everything. He has steeped himself in eastern religion and culture, whether it’s Vedic astrology or the ancient epic poems of India, the Mahabharata and the Ramayana. The mythologist Joseph Campbell is one of his guides.

Falt has written “Make art that brings world peace” on the window next to his bed, and his work is currently in a show in Russia organized by his friend, painter Dima Karabchievsky, that promotes that goal. Yet however far afield he and his art may travel, he remains Maine’s own Dan Falt.