This versatile design has stood the test of time

I was sailing on a friend’s boat last summer on Eggemoggin Reach, when a large cruising boat pulled alongside. “Wow, a Pearson Ensign,” yelled the skipper. “I had one of those before I bought this boat and I loved it.”

His reaction was like that of a bird watcher spotting a species thought to be on the verge of extinction. So imagine his surprise when he rounded up into Bucks Harbor and saw a whole fleet of Ensigns peacefully resting on their moorings.

This lovely, protected port of call at the northern end of Eggemoggin Reach is home to about 35 Ensigns in the immediate harbor and perhaps another half dozen in nearby coves. Known as Ensign Fleet 67 of South Brooksville, this may be the largest aggregation of these boats in the country.

The epicenter is the Bucks Harbor Yacht Club, which sponsors a Saturday racing program for Ensigns and uses them in its sail-training program.

According to the yearbook, club members own 37 Ensigns. Some have been in the same family for years, passed down from one generation to the next. Then there are the folks who also own a powerboat but want to preserve the opportunity for a good daysail or race. Finally, and importantly for the perpetuation of the species, there are a good number of boats owned by young families—many are first-time sailors who have discovered that the Ensign is a forgiving and family-friendly boat.

The 23-foot, sloop-rigged Ensign was designed by noted marine architect Carl Alberg, and manufactured by Pearson Yachts in Bristol, Rhode Island, for about 20 years beginning in 1962. A nicely patriotic number of 1,776 boats were built during that time. The bare boat weighs 3,000 pounds. Its long but shallow keel draws only 3 feet and encases 1,000 pounds of lead, which gives the boat stability.

The hull design was borrowed from that of the Pearson Electra, a pocket cruiser known for its good sailing qualities. The idea was to create a one-design racer/family boat.

The concept was wildly popular and the boats were immediately and enthusiastically snapped up and raced by sailors, especially along the East Coast. That the boats were quite pretty, especially under spinnaker, and nicely trimmed in mahogany, and that they had an enormous, deep cockpit that could easily accommodate six or more people comfortably, also contributed to their popularity. Being able to pile the family into the boat for a pleasant recreational sail when not racing was a big plus. Early brochures emphasized the boat’s utility as well as the claim that it sailed like a much larger vessel. 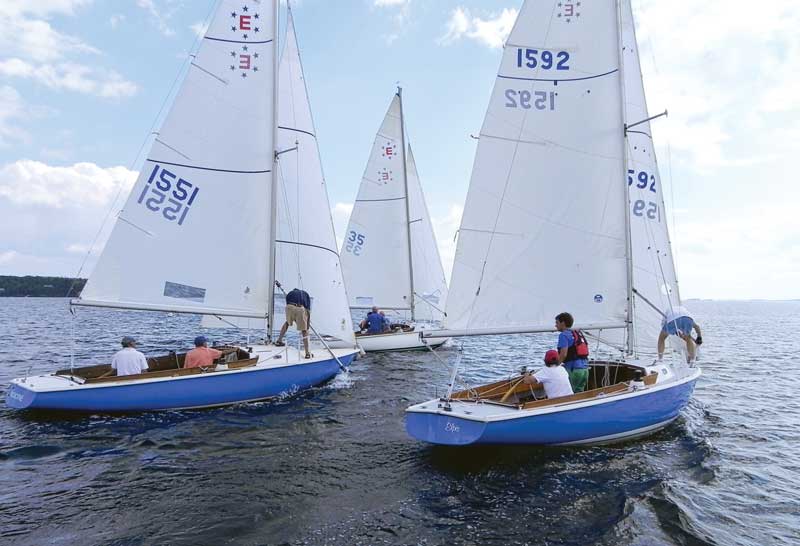 Ensigns are typically raced with a crew of three, but the spacious cockpit can hold up to six people. Here, crews prepare for a spinnaker set as their boats approach the windward mark. Courtesy Ted Foot

The Ensign is one of those rare boats that has more than stood the test of time. There are still about 50 active fleets across the country, not only on the coasts, but also inland on lakes and rivers. You would not be wrong to say that the boat is, “having its second wind.”

There are many reasons for this continued popularity.

The fact that the Ensign can be raced or day sailed is important, as are the shallow draft, the heavy keel, and the protected rudder that is not prone to snagging lobster pots. That the boats were simply and ruggedly built makes them comparatively easy and inexpensive to maintain.

Ensigns are not hard to buy and sell—in any given season, one or two of them change hands in Bucks Harbor. Class rules keep the cost of racing to a minimum. For those who don’t haul them on a trailer and store them in their backyards, the nearby Seal Cove Boatyard has considerable expertise in keeping the local boats in good shape. For those who wish to purchase a new one, they may do so from Ensign Spars, a company that purchased the molds from Pearson and is building the boats in accordance with the original specifications.

The boat’s attributes are also shared by other designs and only partially explain the mystery of why there are so many Ensigns in Bucks Harbor.

It is certainly puzzling. If you own an Ensign and do not live in South Brooksville, I urge you to be especially vigilant since there have been reported cases of Ensigns from other harbors gravitating to Fleet 67. I have even been told that sometimes, in the middle of a full moon night, one will shed its shackles to join the flock at Bucks. Perhaps this is a special case of Newton’s law of gravity that has yet to be fully comprehended, but there is a lot of mass in those keels.

I have personal experience of this phenomenon. The Ensign I owned and sailed in and around City Island, New York, broke loose, for no apparent reason one year, and was rescued by the U.S. Coast Guard several days later. At the time it was intercepted, it was apparently headed downeast.

Not too many months after this incident, my family purchased an old farmhouse in Brooksville as a summer retreat. When we learned about the connection between Ensigns and Bucks Harbor, we had ours shipped up. While we no longer own this boat, our love affair with the design continues.

Norman Alt is a retired attorney who lives in NYC and summers in Maine.  He is an avid sailor and an advocate for land conservation.