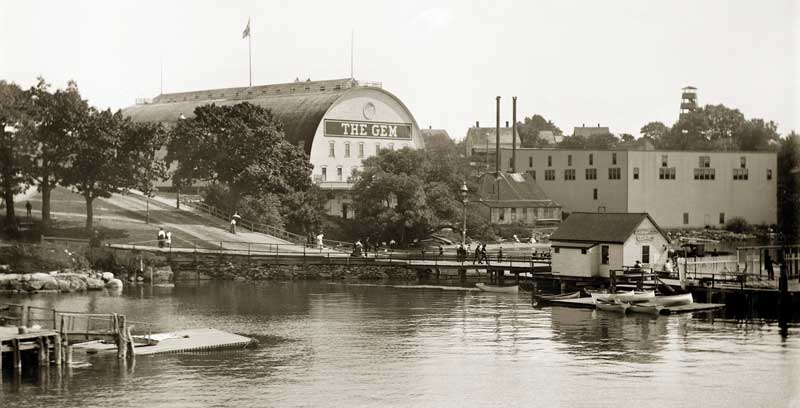 Once a landmark overlooking Peaks Island’s harbor, The Gem was one of Maine’s first summer-stock theaters. The imposing structure was built in 1884 as a roller-skating rink and converted to a theater in 1898; it burned down in 1934. Photo courtesy Penobscot Marine Museum

All summer long, waves of visitors flow onto Peaks Island with every arrival of the ferry from Portland. Year-round residents—about 900—and summer folk sometimes say it’s a bit much. Yet it’s far from a new phenomenon for this 1-by-2-mile, Casco Bay island just 3 miles and a 20-minute ferry ride from the Portland waterfront. Things used to be even busier.

“In the 1870s, a dozen ferries brought several thousand visitors here every day throughout the summer,” Kim MacIsaac told me as I climbed into her golf cart. A fourth-generation Peaks Islander, Casco Bay historian, and owner of Peaks Island Tours, MacIsaac said Peaks was called “The Coney Island of Maine,” and described a boardwalk that once stretched for a mile and a half along the shore.

Nearby, I pictured families in Gay Nineties garb enjoying Greenwood Garden’s Ferris wheel, carousel, live-animal exhibits, bandstand, merry-go-round, midway, and beerhaus. By the 1920s, MacIsaac explained, Americans’ changing travel habits, as well as several fires, shut the old amusement park down. All that remains is the Greenwood Garden Playhouse, built as a roller-skating rink in the 1880s, transformed to a theater in the 1890s, and still putting on shows and concerts today.

Unlike some other resorts along the Maine coast, Peaks was never a destination for the wealthy. Instead, blue-collar workers and their families came to feast on shore dinners and dance at old-fashioned “casinos” (no gambling involved). Those who stayed a while found accommodation in 16 hotels, several large tent campgrounds, and clusters of modest cottages, more than 600 of which were built between 1880 and 1915. 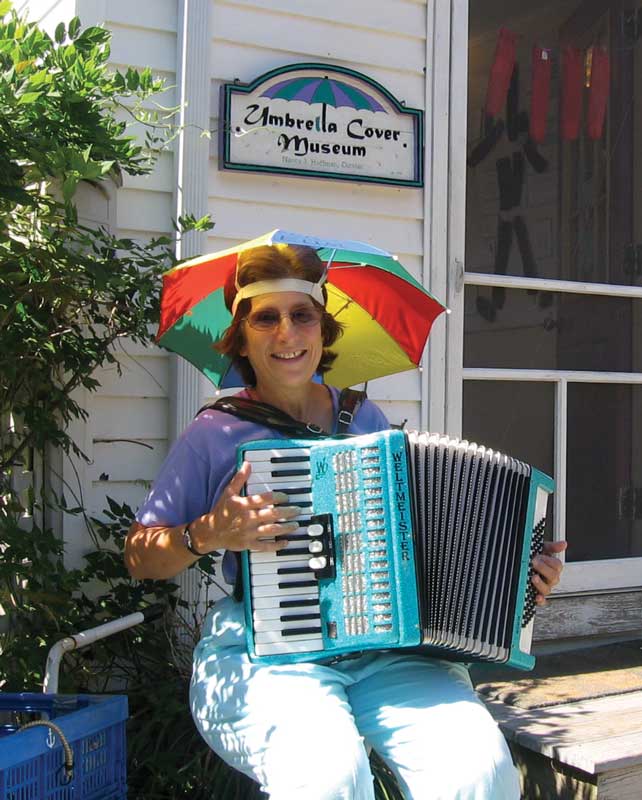 Curator Nancy 3. Hoffman serenades visitors to her Umbrella Cover Museum on the accordian. Photo courtesy Nancy 3. Hoffman Today, Peaks Island offers quieter pursuits to daytrippers and to vacationers who rent one of the vintage cottages or book a handful of other lodging choices. The village has half a dozen or so eateries, an ice-cream shop, and a few boutiques and galleries. There’s also the wacky little Umbrella Cover Museum, containing the Guinness World Record collection—more than 2,000—of umbrella sleeves (yes, really); and the 5th Maine Regiment Veterans Reunion Museum, built in 1888 as a Civil War veterans’ summer retreat and now home to displays on that war and the island’s history.

Most visitors venture beyond the village on foot, bike, or rental golf cart (there are few cars) to small beaches and rocky shores. A four-mile loop road also leads to reminders of the island’s strategic role during World War II. With some 900 soldiers stationed at the Peaks Island Military Reservation, it served as operation central for the protection of South Portland’s shipyards, where more than 200 Liberty ships were built, as well as Portland harbor and the coastline from Kennebunk to Popham.

Some 50 structures included barracks, lookout towers, and a range-finding station. Among the few that remain is one that controlled mines laid throughout the bay, and the 300-foot-long Battery Steele, whose 18-inch-thick, steel-reinforced concrete walls sheltered two 16-inch guns capable of firing shells weighing more than 2,000 pounds a distance of nearly 30 miles. While the huge guns were never discharged in combat, test firings created tremors that broke windows on the other side of the island and, MacIsaac said, “once spattered my aunt’s spaghetti sauce all over her kitchen.” Now covered with graffiti and obscured by dense tangles of bittersweet, the battery is an intriguing place to explore by flashlight.

Prowling around in an abandoned World War II fortification is a far cry from riding a Ferris wheel or promenading along a bustling boardwalk. Yet the island’s simple charms—its sweet cottage neighborhoods and sea-washed shoreline—endure, continuing to draw delighted visitors just as they have for nearly 200 years.

If You Go to Peaks Island

Peaks Island Marina
207-766-5783
peaksislandmarina.com
Close to the ferry landing, the marina provides moorings and dockage by the hour, day, week, and season.

Food:
Restaurants include the Cockeyed Gull (207-766-2800; see Facebook page) and the pub at the Inn on Peaks. There’s a good food truck called Milly’s Skillet, a hotdog cart, and a deli counter in Hannigan’s Island Market. The place for ice cream is called Down Front.

Music:
The weekly reggae bashes at Jones Landing, next to the ferry dock, can get a little crazy. Held Sunday afternoons from Memorial Day  through Labor Day.