An Ode to a Tiny Shingle-Style Cottage 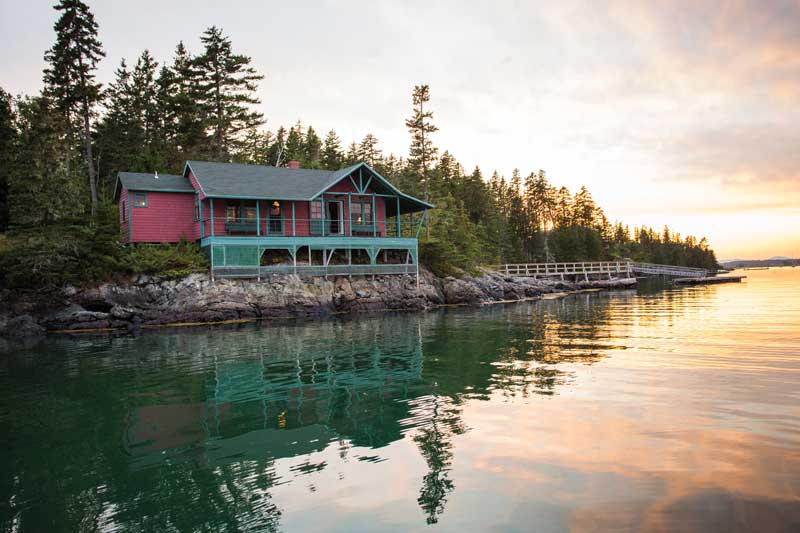 Notice to Mariners: When you next enter the Fox Islands Thorofare from West Penobscot Bay and head into Seal Cove on the way to your favorite anchorage in Perry Creek, take care to slack your sheets or throttle your power so that you can safely hug the bold shore as you pass by Hopkins Point on the Vinalhaven side.

You will be rewarded with a close-up view of what is surely one of the most delightfully beguiling examples of 19th century “rusticator” architecture still extant on the coast of Maine. The paper-thin roof of this tiny cottage, extending beyond its walls to shelter a generous perimeter porch, is perched jauntily above a wood-latticed base that clings lichen-like to the ledge below. A raffishly tilted post propping up one corner of the folded roof imparts further panache to this lively performance at the meeting of land and sea—celebrating an encounter that since time immemorial has been as inexhaustibly stirring to human imagination as it has been challenging to human ingenuity.

Inside, the lucky occupants find themselves lodged in two wood-lined rooms as cozy as the world outside is boundless. Exposed joists dramatize the intersecting planes of a double-pitched roof rising above the top of an interior partition that offers privacy while still allowing space to flow freely through the entire length of the cottage. On the wall formed by a gable above the door on the land side, a honeymooning couple in the early 1900s was inspired to paint a forest of firs containing an osprey nest profiled against a cloud-banked sky—a witty reminder of the view that would be seen had the gable been left open.

The Tucker Daland Guesthouse, named for its sponsor and first owner, began its life as a farmer’s pigsty, then served as a coal storage bin, before being moved in the 1890s from field to rockbound shore and converted to its present use with the help of Boston-based architect Francis Chandler and artist and builder J. Murray Howe II. They placed their little building with its newly-added perimeter porch so close to the water’s edge that it seems to teeter precariously yet fearlessly on the brink of catastrophe.

Happily, the cottage has in recent years been faithfully restored by its present owner, so that this little tongue-in-cheek gem of the Shingle Style may go on bearing eloquent witness to the carefree sense of fun, joined to a perceptive sense of place, that the early rusticators brought with them to the Fox Islands.