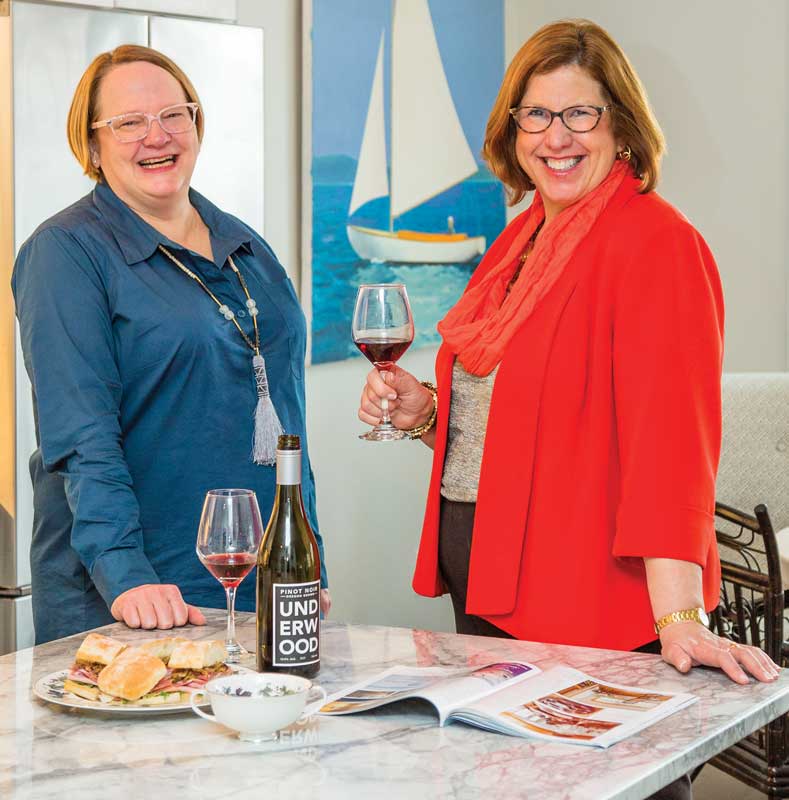 Rachel Ambrose (left) and Nancy Marshall (right) celebrate their careers, their friendship, and their colorful homes in Rachel’s kitchen.

Nancy Marshall’s favorite color is orange. But until recently, Maine’s self-professed “PR Maven,” a public relations professional whose client list includes, among others, the Maine Office of Tourism, the Nature Conservancy, Kennebec Savings Bank, and the Orvis Company, never thought to use it in her décor.

“The color suits me, both physically and psychologically. I love its energy, warmth and vitality,” said Marshall, wearing an orange sweater that was a perfect foil for her auburn hair. “But, until recently, I would never have dared use such a bright color in my home or in my wardrobe. If you had asked me my favorite color, I might have said ‘navy blue.’ Embracing the colors I love is part of the new chapter I’ve begun.”

The new chapter began in 2016, when her marriage of more than 30 years ended. She decided to move to Portland, where she met Rachel Ambrose. Ambrose owns Home Remedies, a Portland store that Architectural Digest named one of “Eight Best Interior Design Stores in New England” in 2017. Her three-decades-long marriage also had ended in 2016. The two became friends, resulting in a fertile exchange of skills and insights. Today, Ambrose uses public relations and marketing savvy to grow her business, and Marshall has gorgeous orange wallpaper in her bathroom.

“We have learned so much from each other,” Ambrose said. “I am amazed at Nancy’s ability to strike up a conversation with anyone. She’s very authentic, and I use her example when it comes to networking, just as I have helped her with design decisions.”

Her friend agreed. “Besides coming to believe that I can have favorite colors and use them, one thing I’ve learned from Rachel is to think not just, ‘Oh, this is pretty,’ but also, ‘Who will use this? How?’”

Marshall bought a 1,600-square-foot condominium at the Bay House in the flourishing India Street neighborhood, near a similarly sized unit built by the same developers that is occupied by her friend. Ambrose has helped Marshall decorate her home so that its lively, vibrant personality reflects its owner.

“I never would have bought this if Rachel had not convinced me to,” Marshall said. “It is the first home I have had for myself. Self-esteem is a big thing when you are newly single. When I walk in after a long day’s work, I feel comfortable and at home, and I think, ‘Yeah! I made it—I have earned this!’”

A Maine native, she launched Nancy Marshall Communications in 1991, after working at Hinckley Yachts and at Sugarloaf Mountain Resort. With offices in Augusta, Marshall’s eponymous company has put a lot of area businesses on the media map, including the Maine Seacoast Mission and Discover New England.

Ambrose, who went to high school in New Jersey and lived all over the world, including in London, told people that her hometown was Friendship, Maine, where her father’s family had summered for six generations. She opened the first Home Remedies store while living in San Francisco.

“My parents bought the Bradco Chair Company in Lisbon, Maine, in the late 1980s. I started Home Remedies to sell their furniture on the west coast,” she said. “When we found houses in San Francisco to be increasingly unaffordable, my husband and I moved to South Portland, where we lived in a 4,000-square-foot farmhouse.”

“I could see that there was no place to buy fabric in Portland. I put together a business plan, got a loan, and found great space in the old Star Match building on Commercial Street,” she said.

Today, Home Remedies sells not only fabrics, but also furniture, rugs, lighting, bedding, and accessories. The store offers classes in pillow making, the principles of window treatments, and other subjects.

“In this digital age, people really want to learn how to do something with their hands,” Ambrose said. Business is booming, and she would like to open more Home Remedies stores in the future.

When her marriage ended, Ambrose  “threw caution to the winds,” and bought her Portland condominium. For its design, she drew on the early 1960s.

“My mother gave me her wedding china, “Burgundy” by Royal Doulton, and I just love it. My parents were married in 1962 and I decided that not only was I going to use that china as my everyday ware (and leave my wedding china with my ex), but that 1962 would be the inspiration for the décor of my new place.”

The design of Ambrose’s condo is driven by the grays, greens, and dark red colors of the china pattern. The exception is in the entry hall, which is lined with “Daintree,” a vibrant landscape-inspired wallpaper pattern by Thibaut. The oldest surviving wallpaper company in the United States, Thibaut makes fabrics and wallpaper offered for sale at Home Remedies.

In Nancy Marshall’s condo, the design inspiration was more problematic.

“Nancy had these rugs that used to belong to her grandmother; they were big, bulky, pastel-colored, and I knew that they didn’t fit and that the colors were wrong. When you have a condo with wide-open spaces, you want to use rugs as islands, to create intimate and useful areas,” Ambrose said. “These rugs just didn’t work, though, for Nancy, they had great sentimental value.”

Convincing her friend to let go of them was the first, and most difficult step in creating Marshall’s interior.

“When she donated them to a nonprofit, I could tell that it was a relief,” Ambrose recalled. “Then she bought rugs from Home Remedies in sea glass-colored jute, with a modern sensibility. I picked paint colors and wallpaper with the rugs in mind.”

Marshall used classic upholstered furniture in neutral tones; much of the color in the living room-dining room-kitchen area is provided by oil paintings by Maine artist Patricia Rizzo. Marshall’s favorite color brightens shelves and counters in her adjacent home office and in the kitchen. But the master bath is where she indulged her fancy with orange wallpaper covered with gold sunbursts. Like the homeowner, it is warm, vibrant and dramatic.

“I have gone from not even being able to imagine having wallpaper in a bathroom to loving this space the best of all. I call it the Nancy Cave—my glamorama,” she said with a laugh.

Clearly, the new chapter of her life is colorful.