Scolopendra was never able to climb out of the water and plane, but a light, efficient hull allowed the British racer to move along at a brisk pace. Newly restored, she powers across a British lake. Photo courtesy Graham Mackereth

When I race sailboats on Great Pond in Belgrade, my concentration sometimes wanders from the jib telltales as I daydream about seeing a classic wooden runabout zip by.

Although I’ve never been lucky enough to observe with my own eyes a gleaming thunder boat in its element, I’ve heard tell of them on Great Pond, and on Long Pond, Sebago Lake,  and Kezar, Damariscotta, and Megunticook lakes—and who knows how many are stored in garages.

Our boatyards are so world-famous for their abilities with wood that sodden old rumrunners and run-down runabouts find their way here for our celebrated wooden boat expertise. Shawn Grant does restoration work and annual maintenance on several at Brightside Marina & Wooden Boat Services in Belgrade. Bruce King designed and Hodgdon Yachts built the 31' woody speedster, Rooster. Bob Stevens has tackled the design motif several times. Another outstanding case in point is Scolopendra.

If you’re searching for historic importance you’d be unlikely to discover any earlier example of a racing powerboat. Launched in 1903 from the Thornycroft yard on the Thames River in Chiswick, England, Scolopendra is one of the world’s first powerboats fitted with an internal combustion engine. This famous nautical phoenix went through years of diverse use, disintegration, and rebirth. What links her to Maine is that the final chapter in her North American restoration took place at Rich Woodman’s boatshop in Kennebunk, Maine.

In 1903, gasoline piston engines were beginning to supplant steam in automobiles and tractors and for other uses. Scolopendra raced that year in the first running for the Harmsworth Trophy, one of the earliest motorboat races. This was an international race, similar to the America’s Cup in that it pitted nation against nation. Underpowered compared with her rivals, Scolopendra came in a distant second, but on the same day easily won the handicapped Yachtsman’s Trophy against the same boats. Although not a fact of great importance, her hull sported the first appearance of British racing green, according to owner Graham Mackereth.

Scolopendra’s fans say the hull likely was designed by Higley Halliday, a young designer-engineer working with Sir John Thornycroft. The hull itself, Spanish cedar planking over thin rock elm ribs, clench fastened, was built by Frank Maynard at Strand on the Green.

The Thornycroft company had developed a 4-cylinder, 4-stroke gasoline engine suitable for installation in a small boat; it was capable of just above 20 horsepower. Two boats were built for experimentation, Scolopendra at 30' and Champak at 40'. Champak had two of the A4 engines bolted end to end.

Though Scolopendra’s engine was only a third as powerful as the competition, it proved reliable, and the hull was light and efficient. 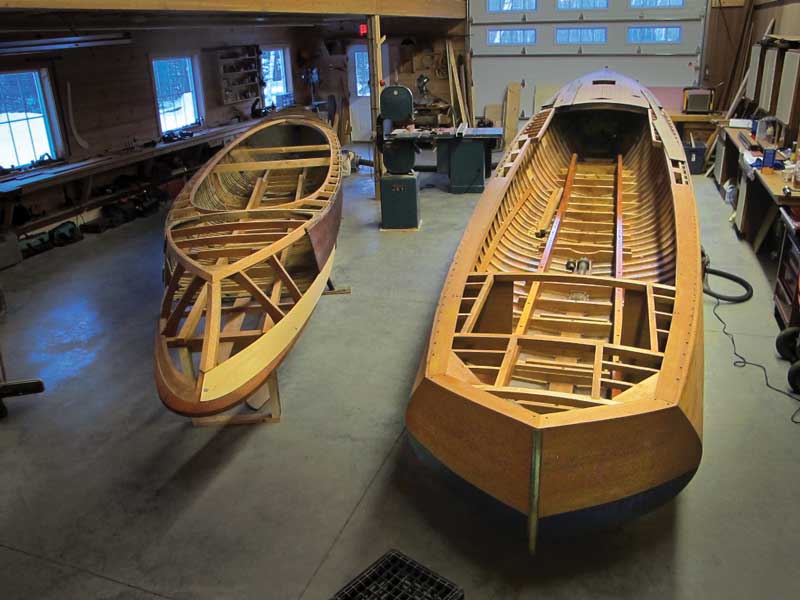 Scolopendra (left) under construction in Rich Woodman’s Kennebunk, Maine, shop sits next to an early Elco that he also has been restoring. Photo courtesy Rich Woodman

The design of the hull was unique, taking the latest lines of steam-driven torpedo boats and allowing for the lighter weight of a gas engine. Although planing hadn’t yet become possible, an outrageously stylish aft end that was a precursor to the flat after-sections of modern boats made for an easily driven hull. The sloped stern resembled a bedroom slipper, which prompted the term “slipper” stern.

After her racing success, Thornycroft showed off Scolopendra at one of the first-ever automobile shows at London’s Crystal Palace. There a Canadian enthusiast and shipyard owner bought the boat and shipped her to Toronto. For a long time, Scolopendra was the fastest boat on Lake Ontario. Later on, she served as a “chase boat” aboard Canadian cruisers during a fishing dispute with the United States. The hull planking still bears scars from American bullets on one side.

Scolopendra’s next owner in 1919 was a contractor named Reg Kitchen from Lake Huron, who used the boat to carry workmen and construction material out to islands, and for a bit of summer R&R with his family. Evidently, he didn’t appreciate the distinction of the extended stern and so he sawed it off. Fortunately, the next owner, Bruce Devine of Montreal, knew that Scolopendra was a valuable and significant antique. He diligently investigated the design and history, and planned for a complete restoration. But then diverted by another project, Devine sold the boat to Tom Mittler, a notable collector of automobiles as well as racing motorboats. Mittler died suddenly before he could have the boat restored.

Then, as so often happens, the Internet played a part. Over in England, Graham Mackereth was surfing the web when he came across a post revealing that Scolopendra still existed and might be for sale. Mackereth is just as nutty for boats as the rest of this crowd, and is technically savvy. Among other ventures, he runs a company that designs and molds various recreational and advanced canoes and kayaks. He saw instantly the potential of buying Scolopendra and completing her rebirth, then taking the boat back to England. For a final and most appropriate residence, the boat would end up on England’s Lake Windermere, considered by many the most beautiful lake in all the world. Mackereth bought the boat sight unseen, and he didn’t have any difficulty getting advice on her restoration.

Bruce Devine and fellow vintage boat enthusiast Mark Mason on this side of the Atlantic, and a number of passionate boat and engine fanatics in Britain all took Mackereth under their wings.

It was clear that putting the old slipper stern back on the hull would be a more complex job than just borrowing the original plans. The work would need to blend modern methods and materials (including epoxy glue) with sensitivity in restoring the hull to its original shape. The ideal conservator would need to be adept at a combination of “eyeball” boat artistry and precise lofting. Mason recommended Maine’s Rich Woodman, knowing that Rich had worked for more than 20 years teaching lofting at The Landing School, and had a pristine shop that specialized in antique boats.

The mandate given Woodman was to restore the boat as close as possible to original, but at the same time render Scolopendra capable of service, “for another hundred years.” Woodman was granted the latitude to change the scantlings and framework slightly in order to make things stronger. Long, old-growth reclaimed timbers were located for the all-important nearly full-length bed logs. It was then decided that Woodman would loft the lines for completion of planking and make the templates, but allow the final planking to be done in Britain, where the original boat was built more than 100 years ago.

While the work in Maine did not involve much wood, copper, or glue it was the most critical work in terms of bringing the boat back as closely as a possible to its original condition.

Scolopendra is now finished and has been launched at Windermere. Mackereth has a period Sterling engine in the boat now, a slightly later development of gas propulsion, and not a Thornycroft product. But he has collected many of the major bones of a Thornycroft A-4 engine, and contemplates 3-D printing a couple of pistons in order to make the boat completely authentic. Among other advantages of the earlier powerplant is that Windermere has a 10-knot motorboat speed limit. With the current more powerful engine, Mackereth must exercise great self-restraint to keep from advancing the throttle to full speed.